“If I were rich and famous, I would buy all the cars I want…”. How many times have you said this sentence? I have done it several times, and apparently several famous people have the same thoughts as me. In fact, today I will let you discover eight celebrities you didn’t (maybe) didn’t know were big car enthusiasts. From multi-billion dollar collections to a passion lived every day, there is something for everyone. Ready to feel some (healthy) envy?

Today we will not talk about any celebrities who bought supercars and very expensive cars to appear and for fun. No pink Bentley by Paris Hilton, no Ferrari and Rolls-Royce by Justin Bieber. The protagonists of today will be actors, conductors or famous musicians all over the world and in their free time they love cars and driving. In short, true enthusiasts. And we can only start from what is perhaps the most passionate actor in circulation: Rowan Atkisnon.

The famous English actor and comedian born in ’55, famous all over the world for the characters of Mr. Bean and of Johnny English, he never hid his love for motors. Equipped even with a C + E license for trucks and articulated lorries, the good Rowan fueled his unbridled passion for engines from a young age. There are several in his automotive “career” Aston Martin, owned by him since the early 80s as the DBS V8 for which he was mentioned in the book by the English politician Alan Clark, Ferrari, Jaguar and many others. 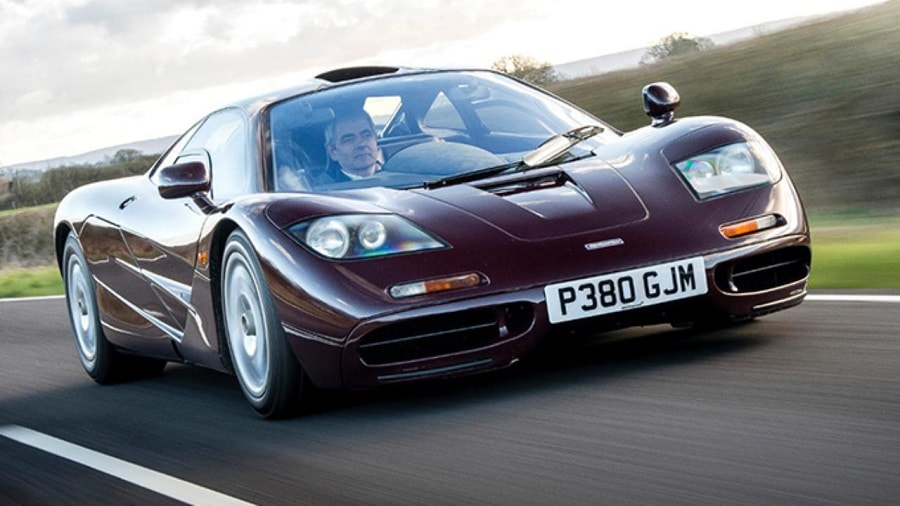 Also invited to the legendary British show Top Gear in 2011, Atkinson calls himself a “classic car collector”. A great lover of classic cars, he linked his name to the most famous car ever in his garage, the McLaren F1. Purchased new in 1997, Atkinson drove that incredible car almost every day until 2015, when he decided to sell it, also convinced by the value that those cars had acquired. Developed by the genius engineer Gordon Murray, architect of McLaren’s F1 victories in the 80s and 90s, the F1 with its 3 seats, carbon body, BMW 618hp V12 engine and manual gearbox is a Supercars for true driving purists. 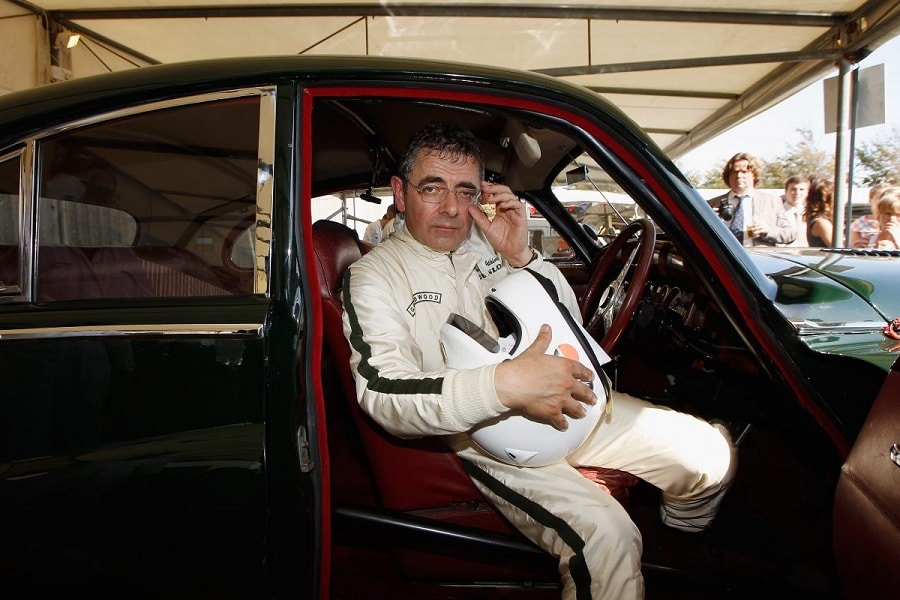 And it is also very difficult to drive, as Atkinson has repeatedly demonstrated, his malgrateful. He has indeed had well two serious accidents behind the wheel of F1: one in 1999, when a Rover Metro collided, and another in the 2011, when he lost control of the car and crashed into a tree. To repair his F1, his insurance issued the highest parcel in UK history: 910,000 pounds. For the rest, Atkinson has also tried his hand at competitions for classic cars, as the Goodwood Revival, and in the 80s and 90s he took part in several British National Championships, like the Renault 5 Turbo Cup. Today at the age of 66 he continues to have a great collection, but he also seems to have opened up to the world of electric cars. Always, however, with classic cars at heart. Not bad for someone who is famous for driving only a battered MINI, right?

Jay Kay, the lead singer of Jamiroquai is the archetype of the car enthusiast celebrity

We stay in England, home of collectibles and vintage cars to meet a singer who from a young age distinguished himself for a marked, very marked passion for the car. We are talking about Jason Cheetham, also known as Jay Kay, the frontman of the English band Jamiroquai. As those who follow the group will know well, in fact, in the video clips of the band’s songs there is always an exciting car, one of all the video of Cosmic Girl from 1996 where a Ferrari 355 GTS, a purple Lamborghini Diablo Spider and a Ferrari F40 appear. 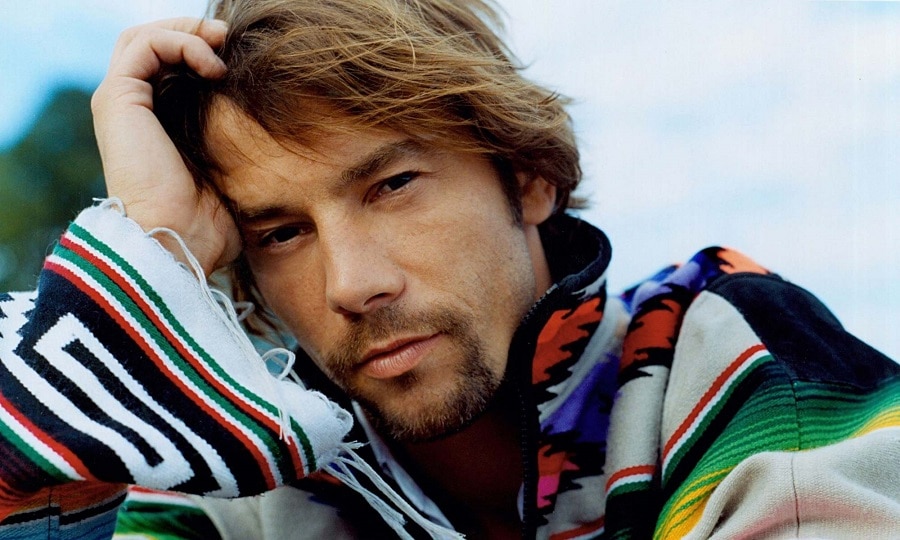 The English singer has in fact claimed to have owned hundreds of cars throughout his life, mainly sports cars. At the moment, it transpires that Jay Kay owns about 100 cars, between vintage cars, supercars, high performance cars and exclusive cars to say the least. His collection includes, for example, diverse Ferrari, Aston Martin, Lamborghini, Porsche, plus several dozen cars that he calls “staff cars”, in use by those who look after his house, the band, his collection and so on. 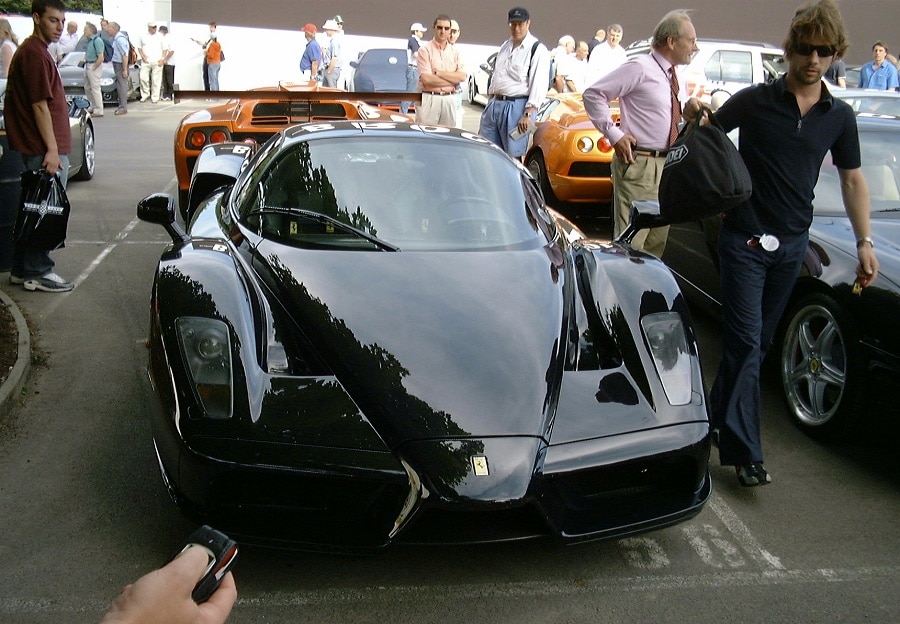 One of the most famous cars owned by Jay Kay is the Ferrari Enzo black to which he dedicated the song “Black Devil Car” from the Dynamite album. During an argument with chef Aaron Billington of the Brudenell Hotel in Aldeburgh, Suffolk, the latter destroyed the car’s windows. Another Ferrari is at the top of its rankings, namely the very rare Ferrari 330 GT Shooting Brake made in a single copy by Vignale. This was in his possession for several years, until he sold it for over half a million pounds. There is also a wonderful one in his collection Ferrari 275 GTB gray, a Aston Martin DB5 and several Audi quattro and other legendary rally cars. Finally, at the 2014 Goodwood Festival of Speed ​​Kay showed the world hers Bright green Ferrari LaFerrari, the only one in the world painted with this color, which sold in 2019. 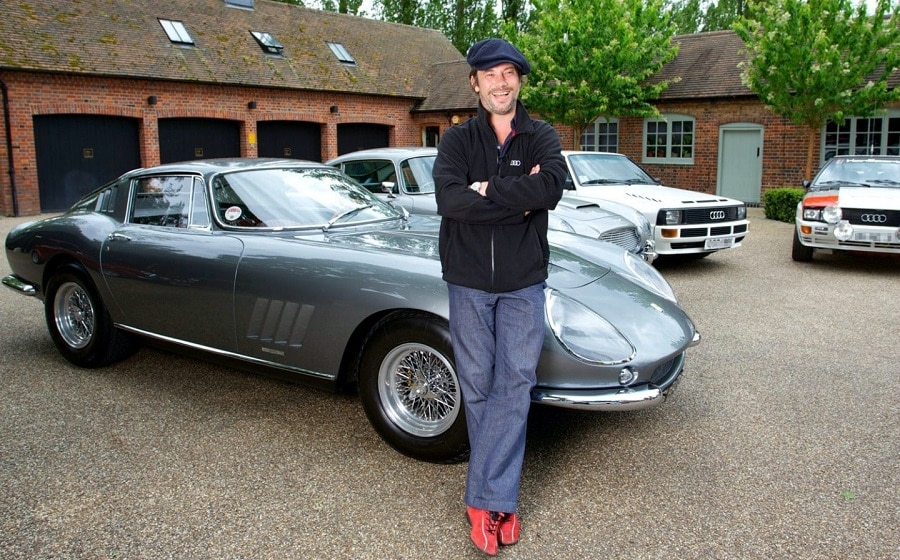 Jay Kay has never hidden his passion for the car, and has often talked about it to the media as well. In addition to the various interviews given over the years, Jay Kay has been a guest on several British car broadcasts. A Top Gear, for example, he went three times, setting the fastest time in the ranking of “Star in a reasonably-priced car” at each visit. In addition, among hosted on YouTube channels and television programs, by taking a tour on the web you can see all his cars. Your favorite currently? It is always Italian, but it is unsuspected: an example of FIAT Doblò first series of 2011, which he uses every day to load everything. Famous and passionate, but still down to earth.

Jay Leno, as host, now has a YouTube channel on cars with over 3 million subscribers

Surprisingly we keep talking about a Jay, but we cross the Atlantic Ocean to go to the United States and meet the American host, actor and comedian. Jay Leno. The 71-year-old Leno, in fact, is known to the general public for being one of the hosts of the legendary American evening program The Tonight Show, known all over the world and today led by the much appreciated Jimmy Fallon. 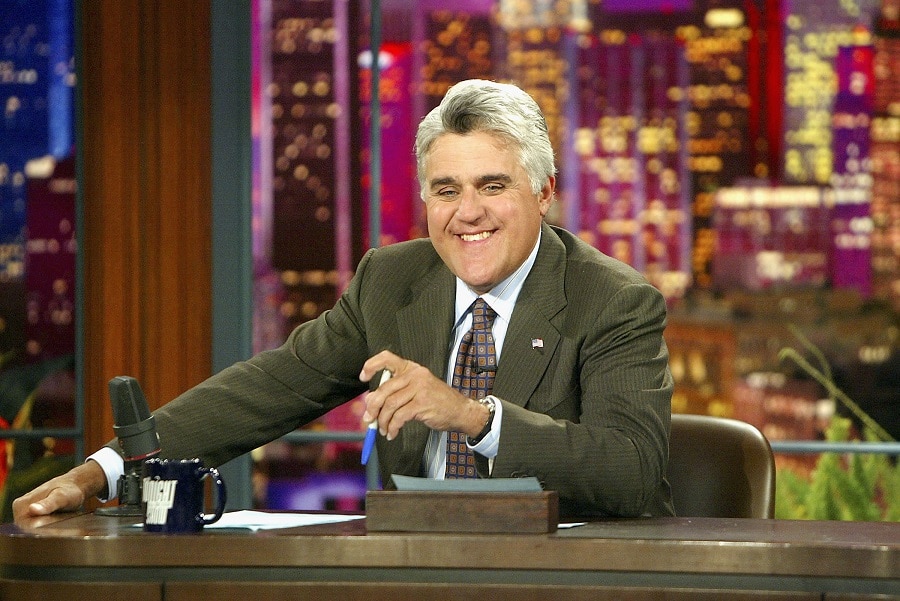 Beloved for his open and friendly style and his peaceful and reassuring appearance, Leno has also ventured into an acting career, mainly playing himself or filling small roles, but his career has been inextricably linked to the Tonight Show, which has conducted in two stages from 1992 to 2010 and from mid-2010 to 2014, when he was permanently replaced by Jimmy Fallon. In addition to bringing the Tonight Show to the top of the serals of the United States, however, has always paralleled his incurable passion for cars. In fact, Leno himself says he “has no vice: I don’t drink, I don’t smoke, I don’t gamble. My only passion is cars “. 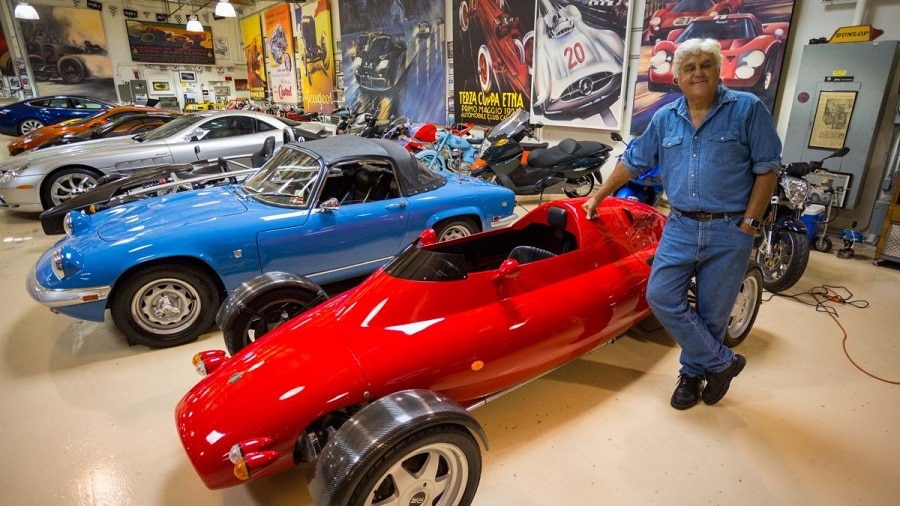 Jay Leno is indeed one of the most famous collectors of America: his private collection counts approx 286 vehicles, 169 cars and 117 motorcycles. His passion ranges from cars from the early 1900s, including one of the first electric cars, a 1925 Baker, to sports and exotic cars. Leno nonchalantly passes from sports cars, modified cars, historic cars, to real one-offs, like one of the 9 Chrysler Turbine Cars with a jet engine never produced, Leno has made a profession out of his passion. Without forgetting the insane Jay Leno Tank Car, you see on the cover of the article. It is a one-of-a-kind model equipped with a V12 Continental engine that comes straight from a tank, and weighs around 4,500 kg. The engine was then equipped with a double turbo, for a total power of 810 hp and 2,120 Nm of torque

After having in fact debuted on TV with the program Jay Leno’s Garage, the American presenter also tried his hand at YouTube with his channel of the same name, Jay Leno’s Garage precisely. Here, Leno produces very long, precise and detailed videos on his cars, on the most interesting news and on cars of friends, fans and manufacturers who propose interesting projects to him. Born in 2008 as a bit of a hobby, now Leno’s channel has over 3.2 million subscribers, with videos of several million views. To list his entire collection, it takesbbe a separate article: by clicking on the presentation video above, you can get an idea of ​​its collection and its his YouTube channel. Good fun.

Eric Clapton, one of the greatest guitarists ever, has a Ferrari made just for him

Despite his latest statements are a lot of discussion, the talent of Eric Clapton it is not in question, on the contrary. The celebrated guitarist and singer, famous for playing solo, with bands such as Derek and the Dominos, Cream, Blind Faith, and with George Harrison, is considered one of the best guitarists ever. Able to play the electric guitar like few others (wonderful in Layla, where he performs in one of the most famous reefs in the history of music), the English musician has never hidden his passion for the car. 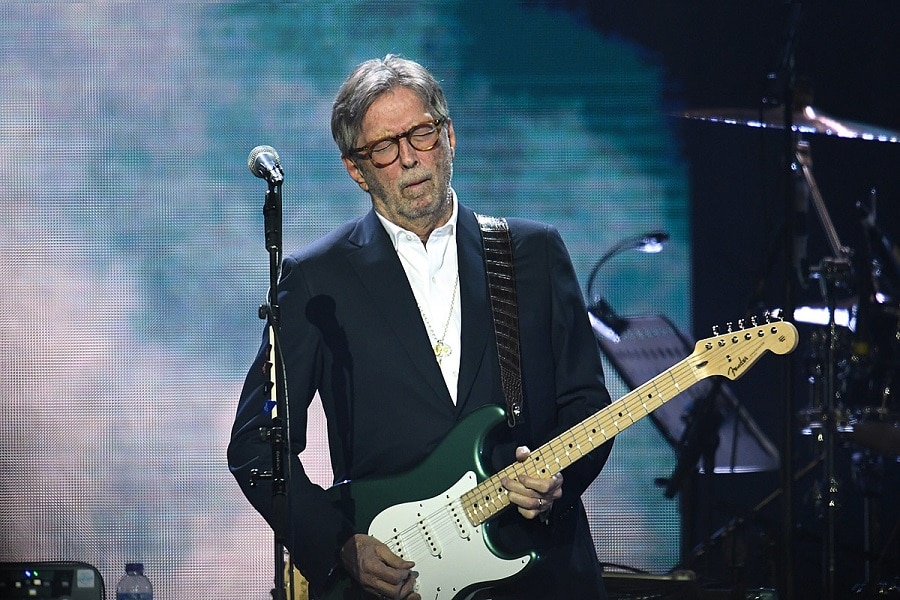 One of the first evidences of his passion for the car is the sale / use / theft of the legendary one MINI Cooper by Radford by George Harrison. Customized by English bodywork with a leather interior, bonnet with additional headlights and alloy wheels, Harrison made his MINI psychedelic, with references to Hindu culture, gold details and so on and so forth. This MINI was at the time used by all members of the Beatles and, occasionally, even by Clapton himself, a friend of the Fab Four. Eventually, Harrison gave his MINI to Clapton, and we like to think that it was that particular MINI that sparked the British celebrity’s passion for cars. 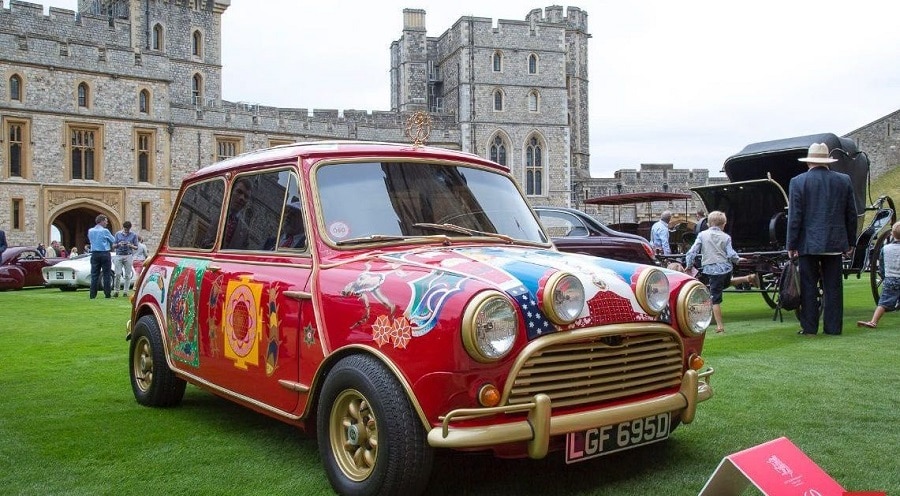 The fact is that, however, as soon as it became successful internationally, Clapton became a full-fledged car enthusiast, a petrolhead. Among all the cars he owned, however, there is one brand that stands out above the others: Ferrari. A lifelong enthusiast for the Maranello company, he has always supported the Prancing Horse in Formula 1 by attending several live races. In addition, he has always professed un lover of Ferrari road cars, coming to have owned a dozen over the years. Among all the “normal” Ferraris he had, one has more than all heated the …