After talking about a true icon of world motoring, famous all over the world for its successes in motorsport such as Lancia Delta, today we see the story of another Italian automotive institution: FIAT Punto. Known by everyone, even those who are not interested in cars, the Punto is the classic sturdy, versatile and suitable for everyone. From the family to the young driver, from the elderly to the employee: for 25 years FIAT Punto was the first choice for the everyday car. But how did Punto manage to be chosen by over 5 million customers? Let’s find out together on this journey through time. Are you ready?

The genesis: from One to… Point! For her, even a factory was born in Basilicata

To understand the Punto phenomenon, we have to go back almost 30 years, to 1993. In that year, the legendary FIAT Uno just turned 10 years old. Since its launch in 1983, the Uno has followed the story of the successful FIAT small cars, from the 100 to the 127. The Uno, modern, spacious and revolutionary, has convinced 6 million customers in Europe alone, and in its almost thirty-year career it has 9.5 million copies were produced.

FIAT’s idea was simple, and time-tested: to add a new, modern replacement to the outgoing small car. At the Uno, which will be produced until 1995, FIAT decides to follow a new small car, which would change the rules of the game. The square and rigorous shapes, typical of the 80s, must make room for a totally different line, softer, more reassuring and familiar. Compared to the old Uno, the new Punto had to be made better, be more spacious, more modern and above all safer. Really huge sales volumes were expected from FIAT. For this reason, the Turin-based company built and inaugurated a new and very modern factory in 1993, the SATA in Melfi, in Basilicata. 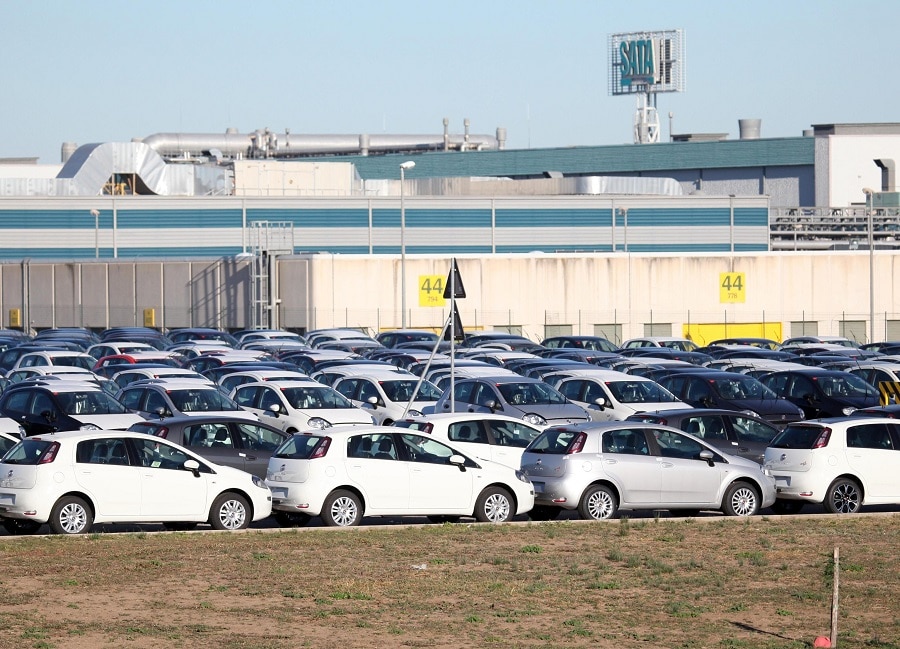 Thus, project 176 (this is the code name of the first Punto) took shape in the early 1990s, only to be unveiled to the world at the end of 1993, at the Frankfurt Motor Show. From an aesthetic point of view, placing the Uno and the Punto side by side seemed to be two different worlds. For this reason, in FIAT they decided on a rupture name, Punto: after the Uno, in fact, the House was putting a Punto with its past, to face its future. 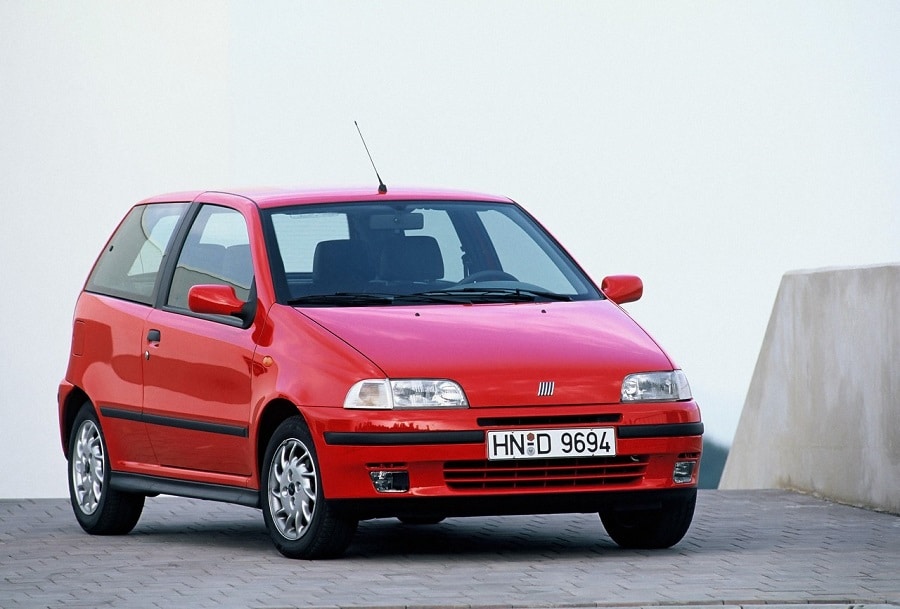 The Punto line was entrusted to the same designer as Uno, Giorgetto Giugiaro from Turin. Compared to the model before her, however, Punto is totally different. The line of the small Italian sports a rather high roof, aimed at giving maximum habitability, but it is the entire silhouette that is typically 90s. In place of the rigorous and squared-off Uno, Punto is tapered, soft, rounded. It has a shell shape, and the slightly pronounced bonnet and the steeply sloping windshield make it look almost like a minivan. Punto is then 7 cm longer than the Uno, reaching 3.76 meters. 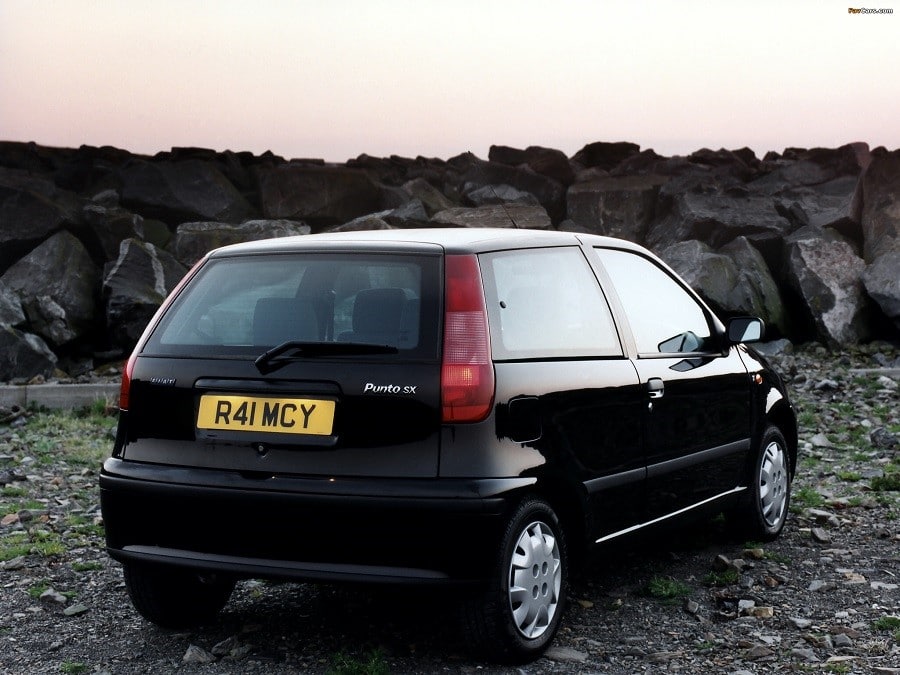 The front is almost faired, with a single large air intake at the bottom, while where the classic grille should be we find the hood with the FIAT logo with chromed strips. The basic versions of the Punto were equipped with raw plastic bumpers, while the more equipped versions sported bumpers in the same color on both the front and rear. Laterally it has a wedge shape that makes it dynamic and aerodynamic, while behind we find the wraparound bumpers and full-height vertical lights. These two elements will then be maintained throughout the history of Punto, up to the third and (so far) last series. The large windows and bright colors then concluded the picture of a modern, lively and jaunty car, the daughter of the legendary 90s. This line is also exceptionally aerodynamic: in the wind tunnel, Punto achieved a Cx of 0.31, the lowest in its category.

The first FIAT Punto, the 176: simple and economical, but also (very) refined

Aesthetically, therefore, the Punto showed its modernity compared to the previous Uno, but it is inside and above all under the body that the new FIAT Punto changes everything. The guidelines for the Punto project were in fact four: safety, space, solidity and modernity. In fact, the Uno did not shine for active or passive safety, and the Punto was the first FIAT to focus on this aspect. 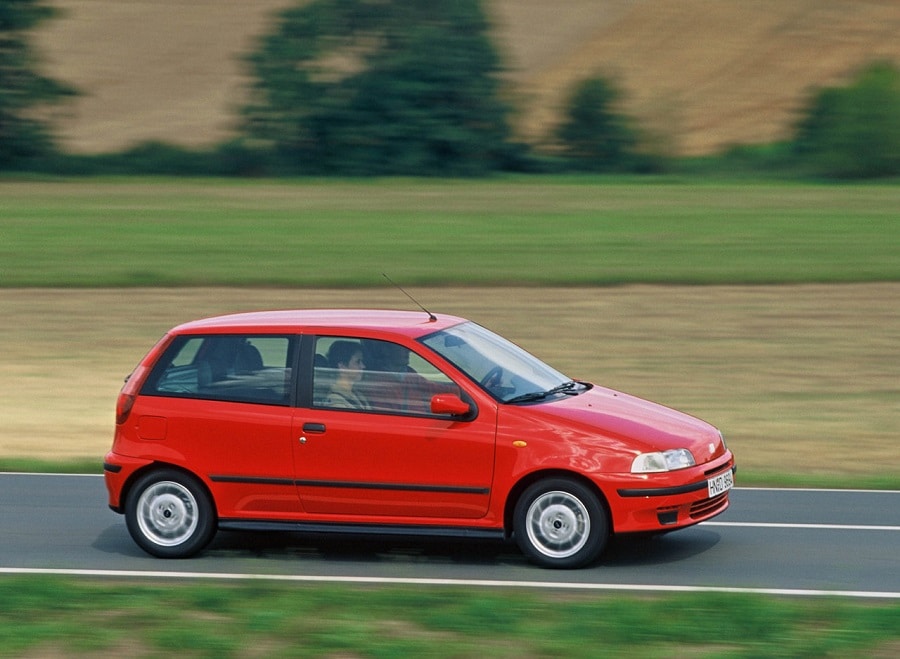 The body, based on a completely new platform, has been designed to be able to absorb shocks in an optimal way. In addition, the steering wheel and column are collapsible, the doors have an anti-intrusion cross member in the event of a side impact and the seats also have a cross member in the event of an accident. At launch in 1993, it is the safest car in its class. But it is not just safety that is taken care of in the design phase. The interiors are spacious, with generous space for 4 people and the possibility of accommodating 5, a trunk of 275 liters and an excellent frontal habitability. The dashboard is also very special. Radio, air conditioning, vents and all the controls are included in the vertical center console, while a plastic eyelid starts from the instrument panel and “dives” into the glove box in front of the passenger. 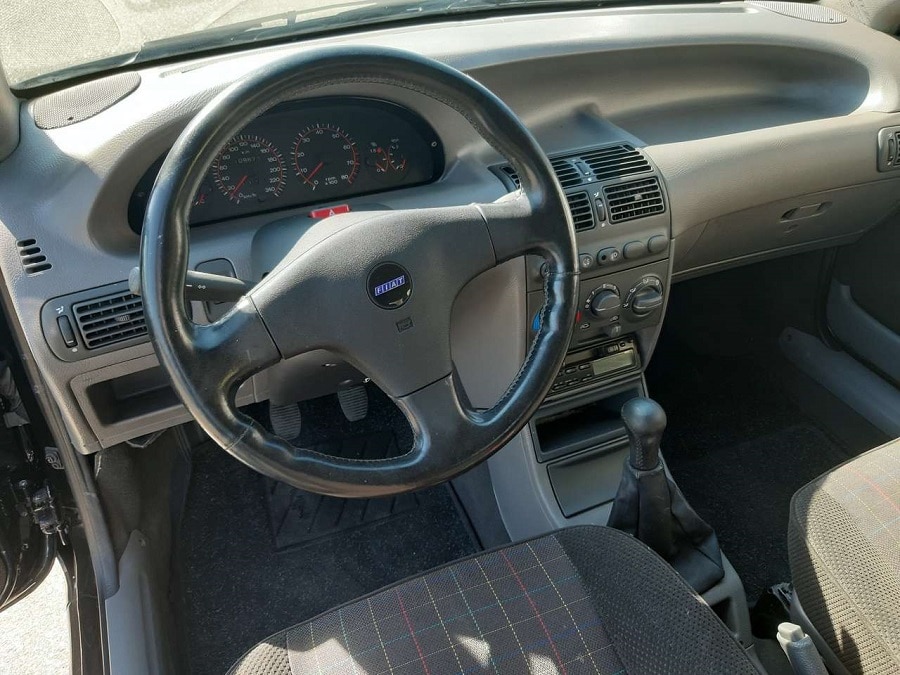 In addition, the “wave” dashboard is made in a single piece, in order to avoid creaking. Inside, then, you can have radio, air conditioning, electric windows, steering wheel controls and electrically sunroof: technologies from higher categories. And the soundproofing is also from a higher category. At 120 km / h, inside FIAT Punto there are 74 dB, at the level of sacred monsters like Volkswagen Golf and the like. But also from a mechanical point of view FIAT Punto is innovative and refined.

In reality, at launch, the engines were taken from the tried and tested FIAT Uno range. From one it also takes the nomenclature, which directly takes the power of the engine. At the base of the range we have the 55, equipped with the 55 HP 1.1 Fire; then there is the 60, equipped with the 60 bhp 1.2 Fire, and the 75, with the 1.2 with 73 bhp. At the top of the petrol range we have the Punto 90, equipped with an 88 bhp 1.6 aspirated. But there are also two diesels, a 1.7 aspirated, the 1.7 D 60 with 60 HP, and the 1.7 TD 70, equipped with a turbocharger and 70 HP. The gearboxes were all 5-speed manual, with the 1.1 6 Speed ​​having a brand new 6-speed manual, or continuously variable automatic for the Selecta. 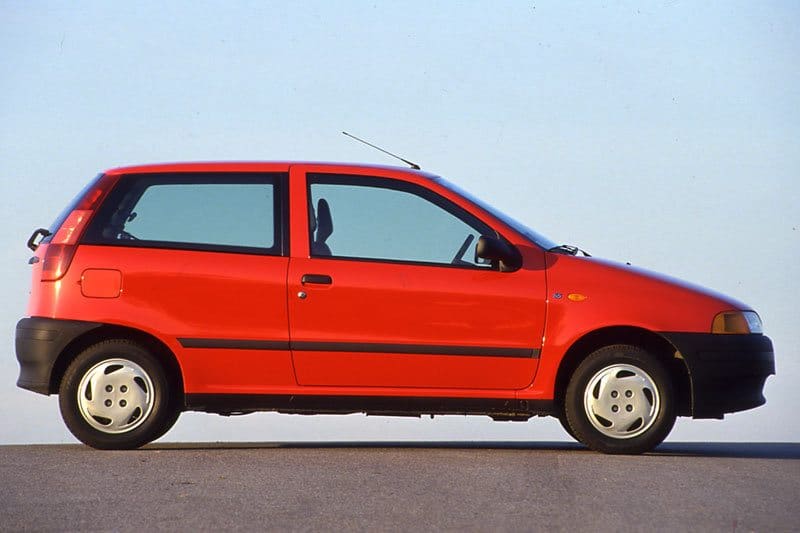 The real technological revolution, however, was at the frame level. Together with the chassis itself, stiffer than the old Uno, FIAT Punto sported a surprising solution of rear suspension with independent wheels with pulled arms. A truly avant-garde solution, usually seen on cars of a higher category (just think that no FIAT offers this solution to date!) And which was unique in the small car segment. This was a guarantee of stability, ease of driving and safety when used under full load.

The FIAT Punto GT, the hooligan of the 90s who collects the heritage of the Uno Turbo

With such a sophisticated chassis and suspension, there could not be a spicy version of the FIAT Punto, heir to the FIAT Uno Turbo that made many fans fall in love in the 80s and 90s. The 90s, for FIAT, were also a flourishing moment for the creation of emotional sports. asti cite the last openly sporty FIAT of the last 30 years, the legendary FIAT Coupé, launched in 1994. In fact, the FIAT Punto GT, the peppered version of the small car, has been available since its launch. The engine used by the Punto GT was an evolution of the 1.4 seen on the second series of FIAT Uno. It was in fact a turbocharged 1.4 4-cylinder engine, capable of 133 HP and a 5-speed manual gearbox. 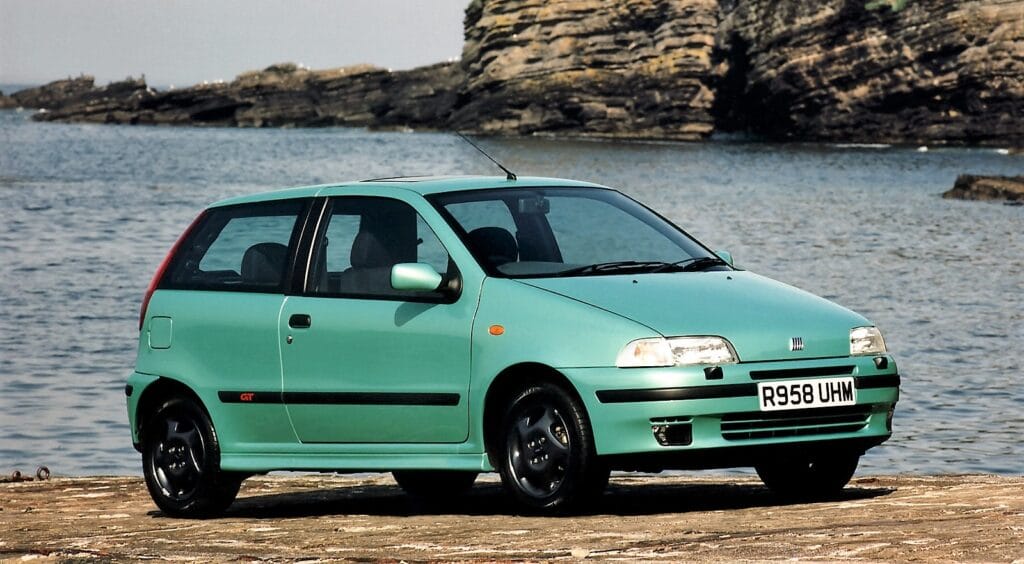 Like the original Uno Turbo, the FIAT Punto GT was not a light and “graceful” sports car like its French rivals, the Peugeot 205 GTI and the Renault 5 GT Turbo in the first place. The chassis, although valid, was not the sportiest, and the steering was light and not too communicative. Like the original Uno, however, it was arrogant: 0-100km / h acceleration is covered in 7.9 seconds, and top speed is exactly 200km / h. 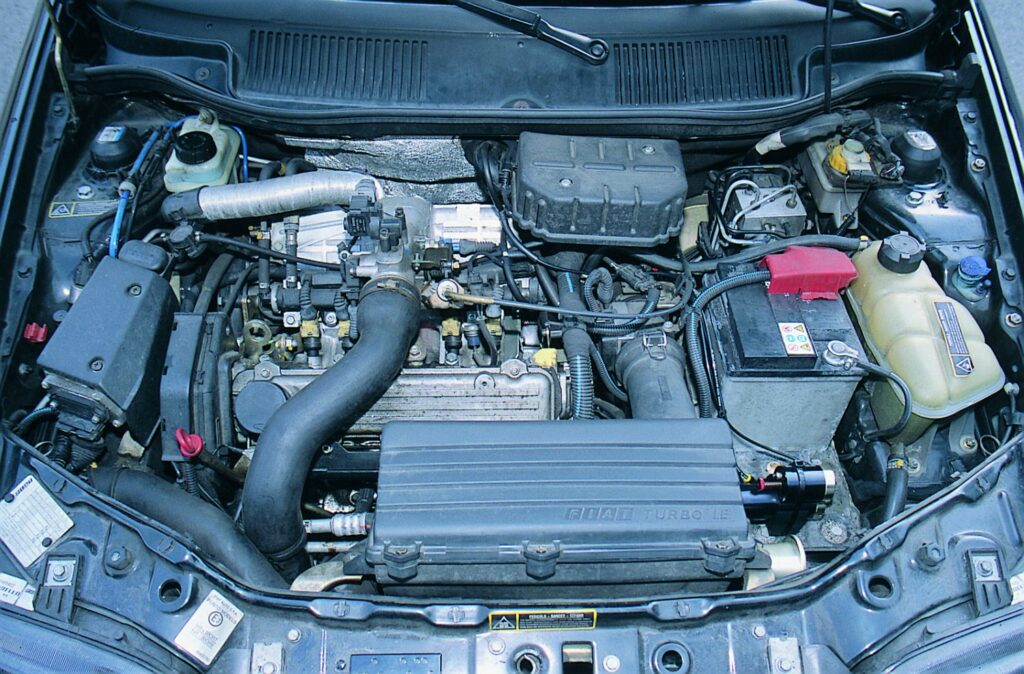 The GT, however, was not supposed to be the flagship version of FIAT Punto, as it was in the end. The GT was in fact to be an intermediate version, a Gran Turismo precisely, to act as a union between the normal Punto and the very sporty Abarth. This version, which was to be equipped with a 1.8 with over 150 HP, was never authorized.

The success: 1.5 million points in just over a year

Its mix of practicality, space, interesting technical solutions and quality, combined with an attractive price, made FIAT Punto the most modern subcompact available on the market. There were no direct rivals: the Volkswagen Golf III was much larger and more refined, while the Polo was decidedly smaller; the French Peugeot 205 and Citroen AX were decidedly smaller and older, while there had not yet been the invasion of the Japanese and Koreans, with the only Nissan Micra fighting on European soil. The four main rivals were FIAT Punto, Ford Fiesta, Renault Clio and Opel Corsa. In 1995, however, there was only one winner in Europe: FIAT Punto. In that year, in fact, the Melfitana Punto won the prestigious Car of the Year award, beating the Volkswagen Polo. 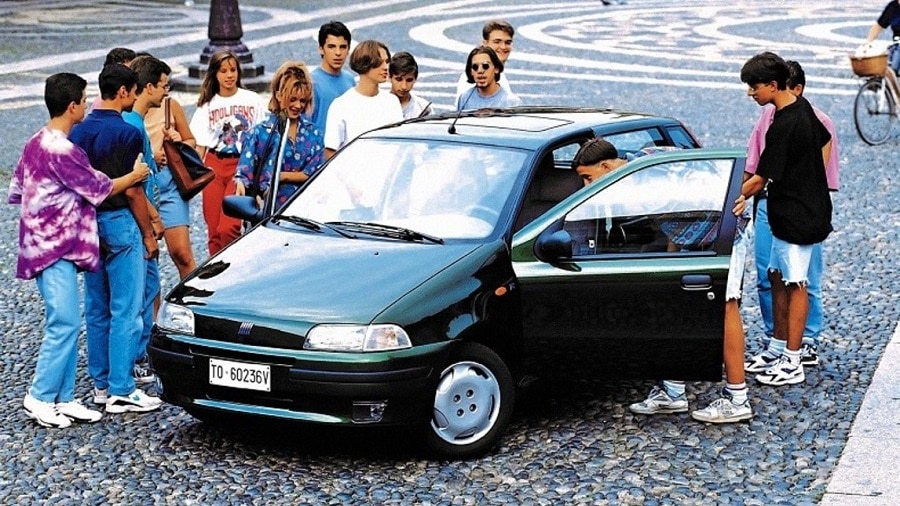 And it was not only appreciated by the specialized press, on the contrary: in Europe, the Punto was simply snapped up. The Punto 176 was in fact an incredibly transversal car: in its basic version, it was perfect for novice drivers and for those looking for a no-frills car; the more refined and more powerful versions were also suitable for freelancers, career young people in the 3-door version and families in the 5-door version; by choosing the GT, on the other hand, even sports itches were satisfied. 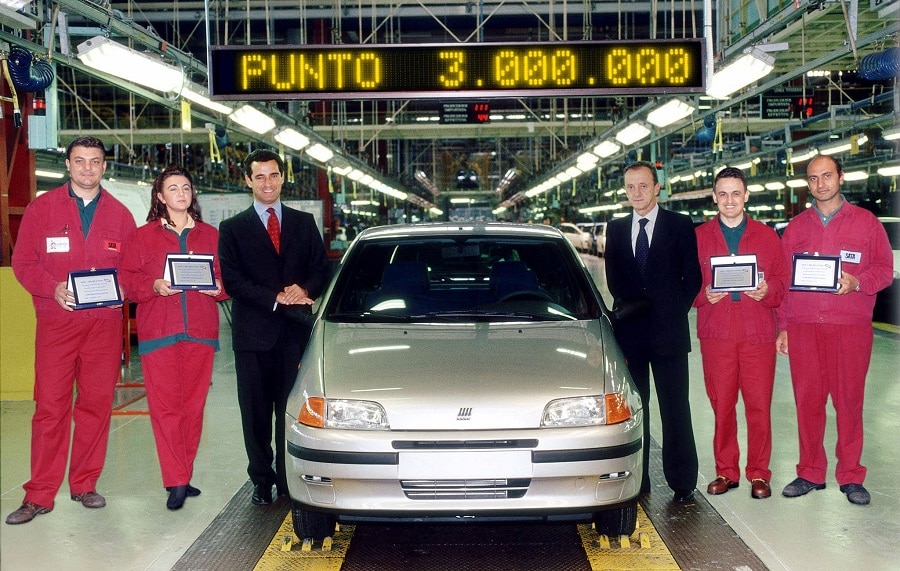 The success of FIAT Punto was truly impressive: at the end of 1994, after less than a year of marketing, 640,000 Points were produced. Within a year and a half, the Punto produced were 1.5 million. The demand was such that FIAT added the production sites of Mirafiori, Termini Imerese and even that of Tychy, in Poland, alongside the main factory in Melfi, in order to be able to satisfy the demand for Punto around Europe.

The saucy Punto Cabrio, the updates, the simplification and the end of the 176

The success of the Punto was simply unstoppable. Not only in Italy, but throughout Europe the small Italian car was the first (or at most the second) choice if you were looking for a practical, reliable and versatile car. In FIAT then they decided to go crazy, in a 1994 that saw the launch of two other emotional cars, the barchetta …