The Ranger is dead, long live the Ranger. It is in fact news these days that Ford has globally presented the new, fourth generation of its iconic pickup Ranger. The new generation, more technological and with more powerful engines (including a new V6) will arrive in Italy in over a year. In the meantime, therefore, we can still enjoy the current one Ford Ranger in 2022. And it’s wonderful news, since the Ford pickup has tons of arrows in its bow, including three new special series launched to celebrate this best-selling generation. Ford Ranger Wolftrak, Stormtrak e Raptor Special Edition these are the three new models that colored a day immersed in the mud of the Oltrepò Pavese, where we discovered that there are really few things more fun than such an effective pickup dipped in mud. Ready to get dirty with us?

Ford Ranger is the best-selling pickup in Italy and Europe, and in 2022 the whole new generation will arrive

In Italy, also due to retrograde legislation, to say the least, the pick-ups can only be approved as N1 trucks, limiting their use in free time contexts and on weekends. This greatly limits the potential of a vehicle like Ford Ranger, which surprisingly adapts to many different situations. For work, for free time, for sport: there is a Ranger suitable for everyone, and despite being sold in 180 countries, its size is perfect for the European market. P.It should come as no surprise that the Ford Ranger is the best-selling pickup in Europe, where it reached a market share of 35% in 2020 and where, according to projections, it will arrive at the end of 2021 at 39%.

So if more than one in three pickups sold in Europe is a Ford Ranger, in Italy the numbers are even more important. Ford does indeed sell 300 Rangers per month, the double of the first competitor on national soil, Mitsubishi L-200. There market share in Italy reached the 36% in 2020, and this year is about to reach an incredible figure of 42,1%. Almost one in two pickups sold in Italy is a Ford Ranger. The merit belongs to his own formula which continues to convince all those who want and need a pickup. All Rangers are equipped with four-wheel drive intelligent and insertable, ofHill Descent Control for the control of off-road descents, of FENNEL and automobile technology and one robust and reliable mechanics.

For this Ford Ranger will not leave, to the contrary of some competitors, but will be completely renewed with one new, fourth generation. Made again by the Australian division of Ford, the new one in Oceania Ford Ranger 2023 has seen the light. Based on the current mechanical basis of Ford Ranger, said T6, the new Ranger will not give up the chassis with side members, four-wheel drive and a technological equipment of a car. All this, however, will still come improved. From outside, the lines are more modern and hark back to Ford’s most iconic off-road models such as theF-150 or family Bronco. Behind, then, there is room for a recessed step in the rear bumper, which allows easier access to the body. 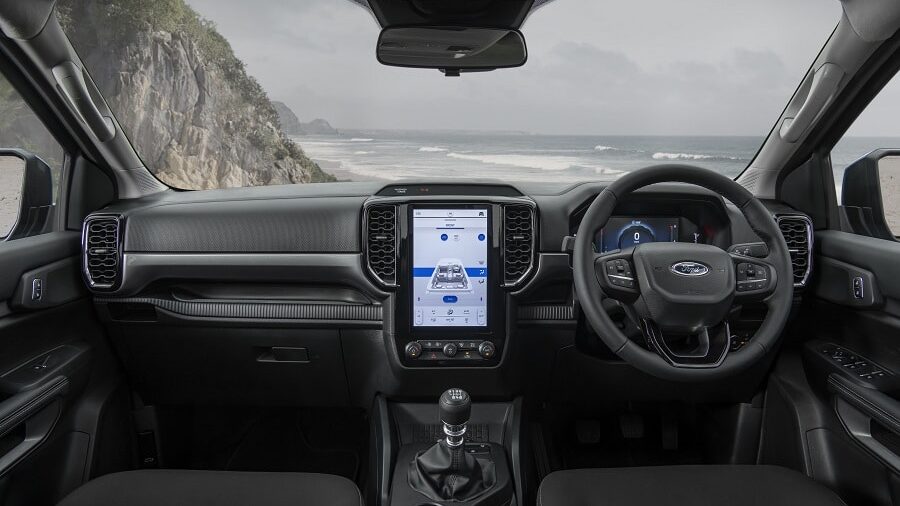 This is one of the features that Ford has decided to include after collecting comments from over 5,000 Ranger customers around the world. From their opinions and criticisms, Ford has implemented some interesting news on the new Ranger. Again, inside there is a place new vertical infotainment screen, inspired in the location by the cousins ​​F-150, Explorer and Mustang Mach-E. This new touchscreen 10 or 12 inch hosts the system Sync4, and presupposes a new level of technology. Finally, the mechanics has been revised and improved, including the adoption under the hood of a new 3.0 V6 turbodiesel. This engine, entirely of Ford origin, will give new vigor to the next Ranger. From this base, then, the next Volkswagen Amarok will also be born, with the German manufacturer having participated in the development since 2017.

PTo see the new Ford Ranger in Italy, however, we will have to wait a long time. Although it was in fact presented in Australia a few days ago, where it is expected to be marketed for the first months of 2022, in Europe we will see the new Ranger in October next year, with the arrival in the dealerships scheduled forearly 2023. There is therefore still quite a bit of time for enjoy the current Ford Ranger 2022 range, renewed for the occasion. For to celebrate the third generation of the Oval pickup, which with its qualities has hoisted itself as a best-seller in Europe, Ford has prepared well three special series, which we tried on a muddy day in late November: Ford Ranger Wolftrak, Ranger Stormtrak e Ranger Raptor Special Edition. We were able to test all three in one really tough route, between mud, twists, accelerations and laps of the “track”. 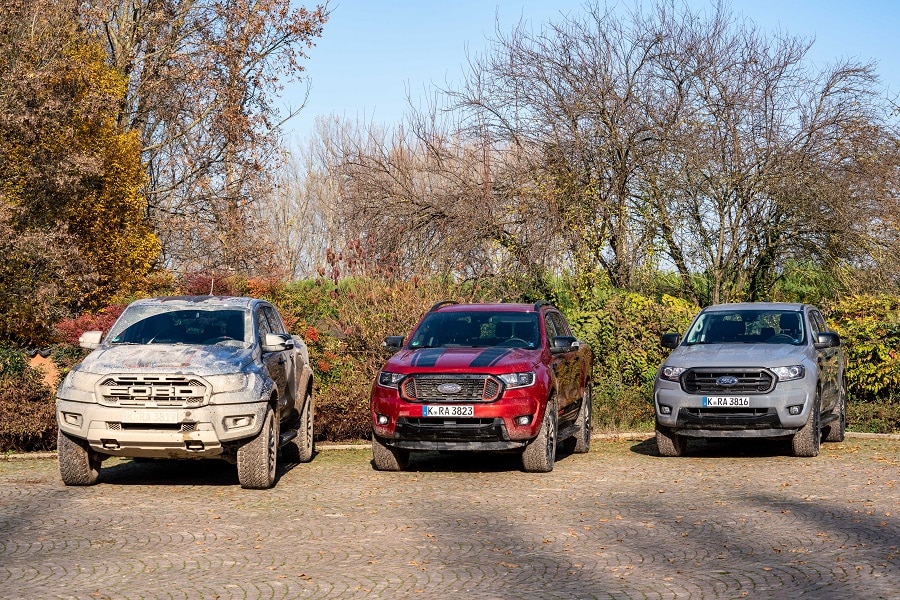 But before throwing ourselves into the mud, how do these special versions differ from the classic Ranger range? The Ford Ranger 2022 range is in fact formed by 5 setups: base XL and the most gifted XLT, dedicated to the working use of the pick-up; the most cared for Limited e Wildtrak, dedicated to work but with an eye to comfort and free time; finally the sports version Raptor, dedicated to those looking for performance and fun on any terrain. These are available (except Raptor) in declensions a single cabin, Club Cab with 4 seats and rear half doors, e double cabin. For the XL and XLT versions, the Chassis floor, for tilting or insulated configurations. All three special series, however, are available in Italy exclusively with double cab. In this already very varied range, the three special series are aimed at very different customers and targets. 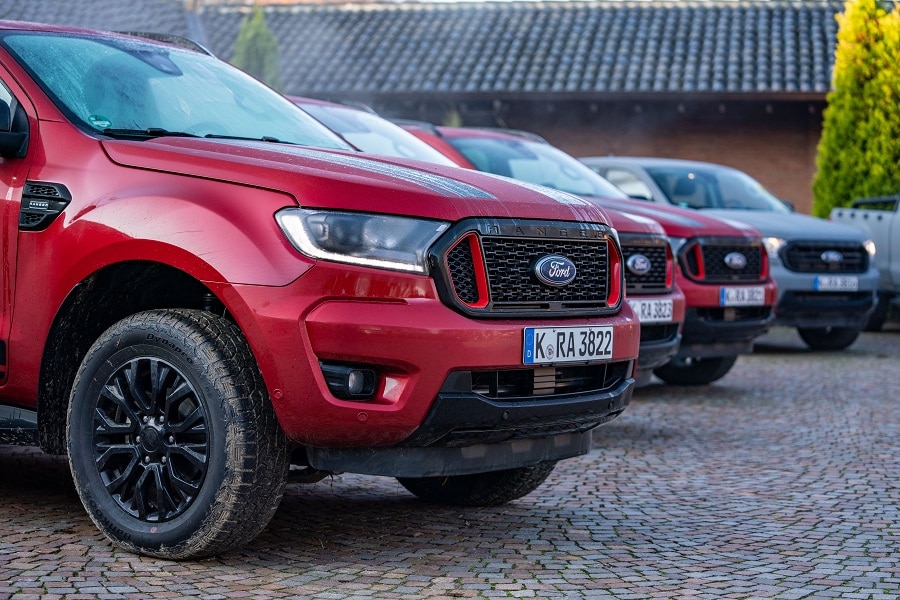 The Wolftrak is the special version of Ford Ranger 2022 more rude and pragmatic. Based on the XLT trim, the most equipped of the Rangers dedicated to work, adds to this details of style and technology, as well as an endowment capable of giving satisfaction off road. On the contrary, Ford Ranger Stormtrak wants to offer a driving experience with more style and comfort. Based on the set-up Wildtrak, Ford Ranger 2022 Stormtrak sports a very particular ruby ​​red, the complete covering of the cargo bed and even the very comfortable one coverage of the caisson electrically roll-up. In addition, inside the red details and specific leather seats make the environment even more refined. Only the baddest of the Rangers is missing, the Raptor Special Edition. Compared to the already crazy Ranger Raptor the differences are few. The bold and unique style is further nasty, while the mechanics, fortunately, remain unchanged.

Our test in the Pavia mud, among horses, mud and very challenging passages

All Ford Rangers 2022, however, have in common the sturdy frame with side members, the four-wheel drive with the reduced and an innate off-road capability. Three such vehicles should not be tested like all other cars: for this reason, the guys from Ford invited us to the splendid Relais Tenuta Il Cigno, in Villanterio (PV). Here we found a waiting for us real off-road route surrounded by nature, passing through riding schools, rice fields, woods and a lot, a lot of mud. 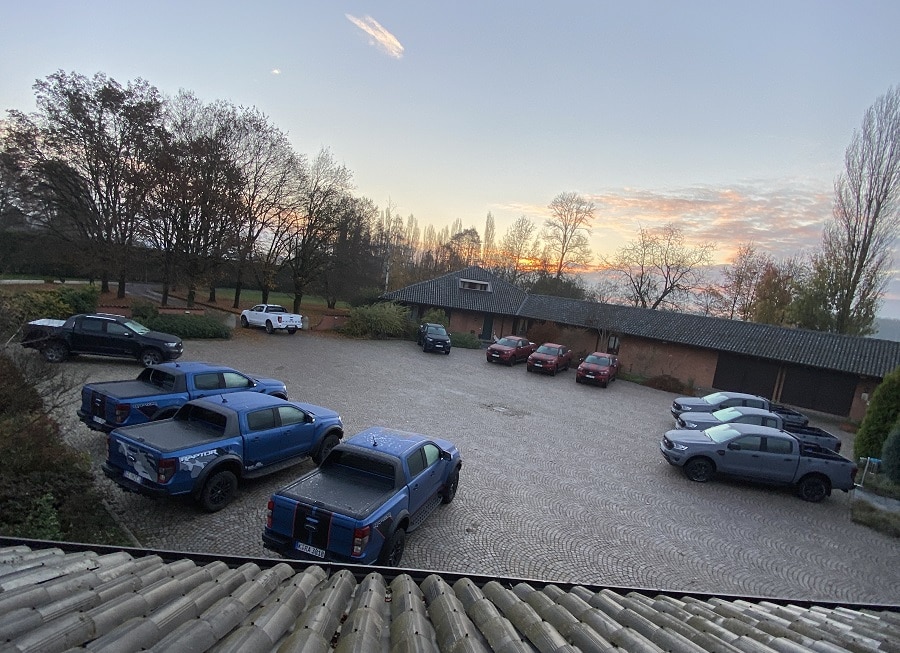 In the terrain of the Oltrepò Pavese, made even more treacherous by the rains of the previous days, we put the three special series of Ford Ranger 2022 to the test in different exercises and passages that were challenging to say the least. On our path we have indeed found twist, sloping passages, mud flats with very high furrows, very steep slopes, a straight line dirt road full of holes and finally we had the opportunity to walk the paddock, the oval where the horses warm up before a race.

Let’s start with the smallest, Ford Ranger 2022 Wolftrak: take care of the point but take you everywhere (even with the manual gearbox)

Let’s start with the “little one” of the house, Ford Ranger Wolftrak. Based on the XLT version, this version remains suitable for those who use the pick-up in a work context, but without sacrificing details of style and technology and off-road capabilities. Compared to the starting XLT, in fact, Ford Ranger 2022 Wolftrak offers one dark gray paint very interesting accompanied by black grille, rims and bars in the body. In addition, inside we find the Sync infotainment system 3, parking sensors and more “automotive” details. Aesthetically it is very pleasing, with an aggressive color scheme that helps to mask the ben 5.36 meters in length. 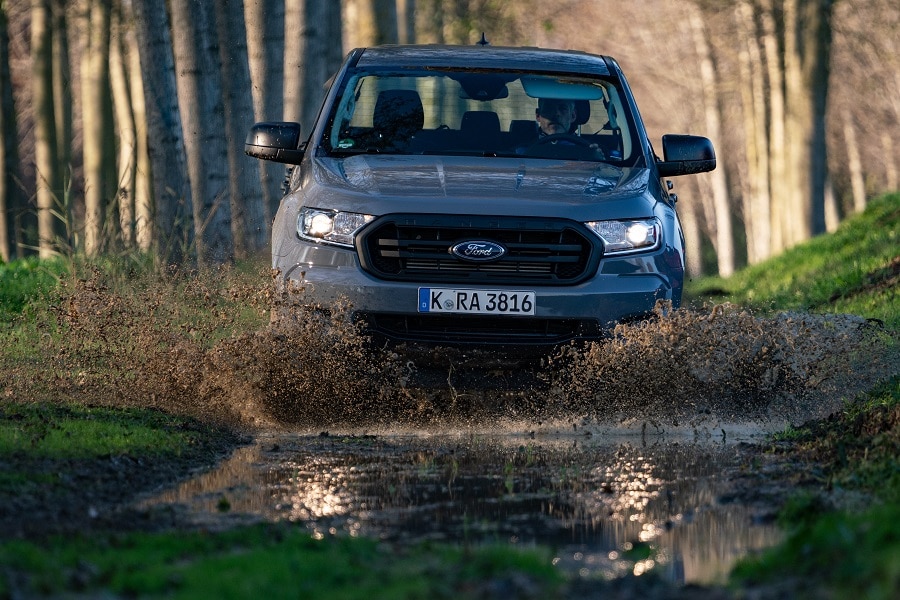 At the level mechanic, compared to the starting XLT we have All-Terrain rubber and the rear differential with electronic differential lock, while the all-wheel drive insertable with reduced, ground clearance and engine. In fact, under the hood we find the 2.0 4-cylinder turbodiesel with single turbo with 170 HP and 420 Nm of torque, which can be coupled to the 6-speed manual gearbox or 10-speed automatic. We tried the version with manual transmission, to discover if even the “entry” version of the Ranger world could get by in such a tough environment. Well, Ford Ranger Wolftrak’s answer was surprising. 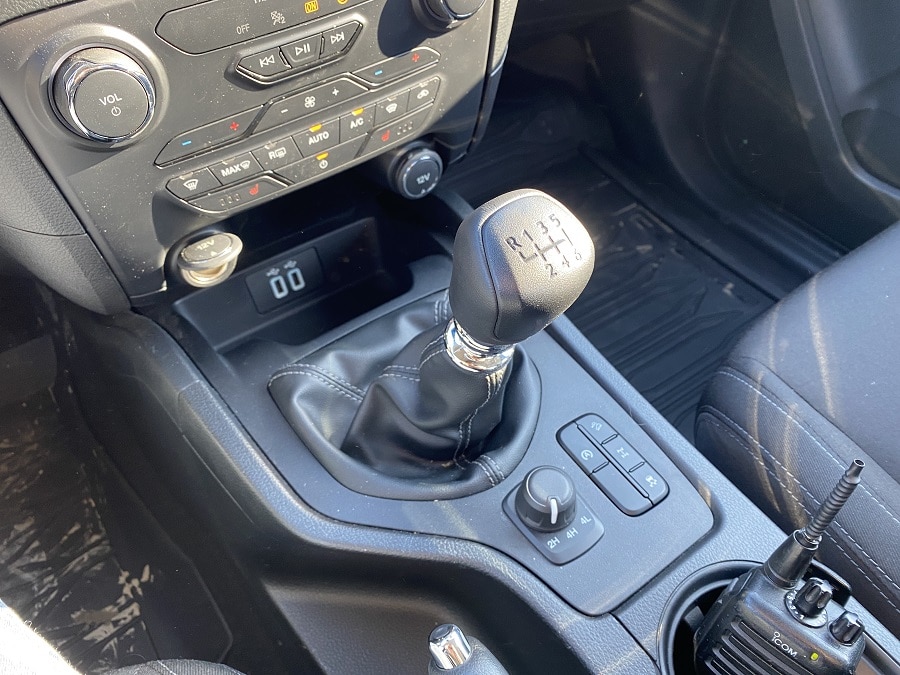 Although in fact it is the lowest of the Rangers tested today, as well as the least powerful and handsome, Ford Ranger Wolftrak has disengaged great in all situations we put him in. The insertable all-wheel drive is of excellent workmanship, and makes this “small” off-road vehicle capable of overcoming practically all obstacles. With the vehicle in two-wheel drive mode, it is agile and pleasant to drive, even allowing some oversteer very enjoyable on the mud. As soon as the four-wheel drive is inserted, however, the traction is excellent, and by remaining at constant gas you can easily drink even the most demanding quagmires. And if the going gets really tough, the reduced gears and the differential lock allow you to get out of even the most complicated situations. 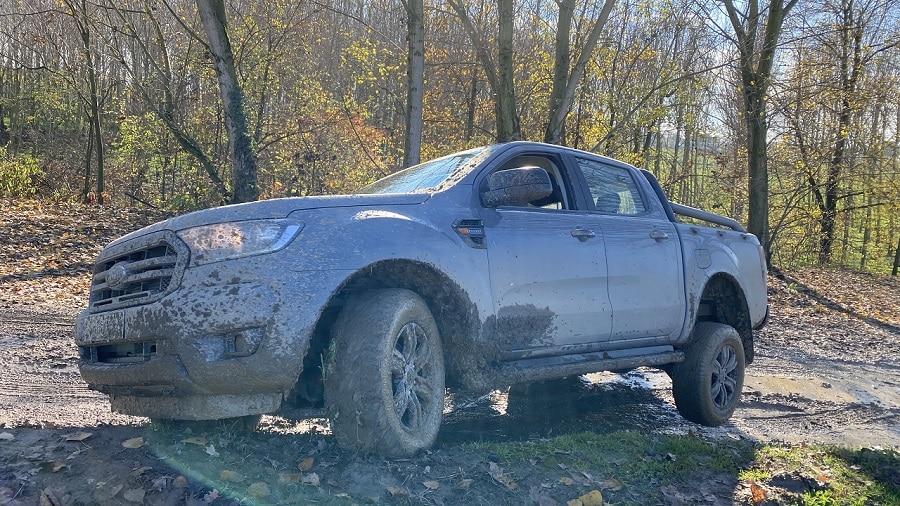 The “little” Wolftrak struck me: he was able to overcome practically all the obstacles we faced him, from the twist to the mud. The 170hp engine pushes well and never feels underpowered, while the only sector in which it gives way to its older brothers is comfort. Compared to the more refined and sophisticated versions, in fact, on Wolftrak there are more holes and knocks. The spars frame and the dedicated leaf spring rear suspension …