We don’t often talk to you about vans and commercial vehicles, despite the fact that the writer is a great admirer. Today, however, we make a small exception to tell you about a real whitefly, the first (and for now only) plug-in hybrid van on the market: Ford Tourneo Custom Plug-in Hybrid. We have seen closely the “civil” version, Tourneo in fact, of the legendary Ford Transit, the most popular medium van in the world. Under the hood, more than a hybrid system we have an electric powertrain with a thermal engine that acts as a range extender, with 40 km of electric range and many qualities. But it’s not a van for everyone, starting with the price. Are you curious to know him better? The Ford Tourneo Custom Plug-in will soon have no more secrets for you.

What is Tourneo? The “civilian” version of Transit, the most famous small van in the world

Before we start telling you about the Ford Tourneo Custom Plug-In, it’s best to take a little trip back in time to understand that what Tourneo is. The name of our 8-seater van is in fact little known to the general public, but it is none other than there “civilian” version of the legendary Ford Transit, one of the most famous and sold vans in the world, as well as one of those with the longest history.

The Ford Transit was the first model produced in collaboration between the German division of Ford in Cologne and the British division of Dagenham, resulting in all respects the first European Ford model. In the 1960s, Ford wanted to create a van modern, different from the classic rear-engined vans or with the engine, very noisy, between the front seats. The new van had to have one driveability like a classic sedan, with a spacious load compartment and the right comfort to work. Thus was born in 1965 the Ford Transit. Front engine, rear-wheel drive, pronounced front bonnet, aesthetics inspired by American vans and many configurations, from passenger ones to box bodies to frames to “dress”.

Thanks to its driving and comfort qualities, the Ford Transit has become one of the most popular vans in the world in just a few years. Just think that even in America, where Ford was very proud of its Econolines, vans with V8 engines and even huge and heavy V10s, from the last generation of 2013 the Transit also arrived in the States. Welcomed with distrust, it is now highly appreciated for its qualities of driveability, space and reliability.

In its 55-year history, however, the Transit has not remained alone, quite the contrary. A “Transit family” was formed. At the base of the range are the Transit Courier e Transit Connect. Small and compact, from a mechanical point of view they have little to do with the original Transit project, based respectively on Fiesta and Focus, but offer practicality and driveability even for those who work and live in tight cities.

We then have the Transit Custom, who is the protagonist of today. They go medium, the Transit Custom is a rival of medium vans such as FIAT Scudo and Talento, Renault Trafic or Mercedes Vito. Available only with front-wheel drive, it is the best-selling van in the range thanks to its size-to-space ratio. At the top of the range there is also the hard and pure Transit. Rival of the great FIAT Ducato, Mercedes Sprinter and the like, it is available with both front and rear wheel drive, and offers a lot of space and versatility, as well as an excellent range. 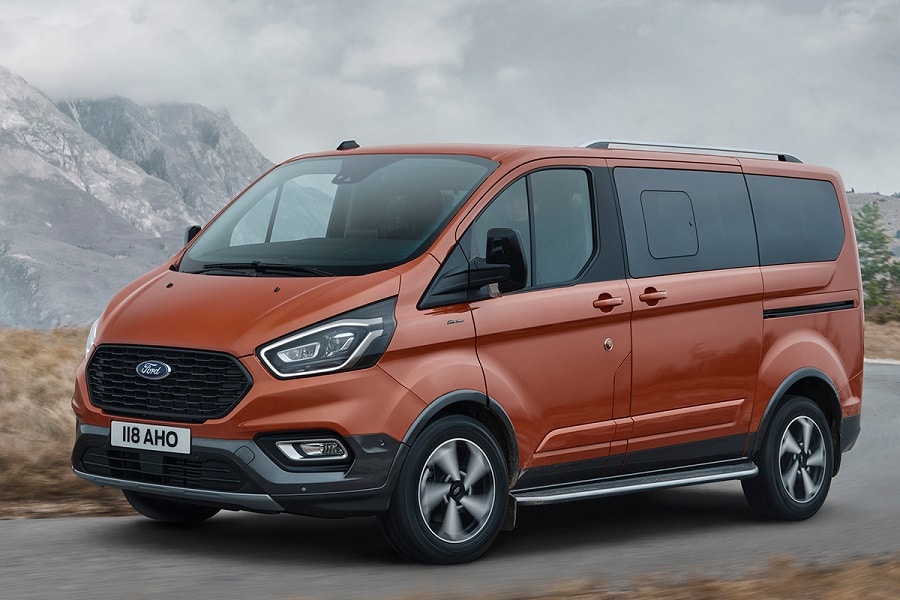 And what does Tourneo mean? With this name, Ford identifies all versions used for transporting people, both mixed (with compartment for things and cockpit for people) than cars. The small Tourneo Courier and Connect are real minivans, like the Renault Kangoo or the FIAT Doblò. The Tourneo Custom of today, on the other hand, is a real minibus. It has 8 or 9 seats depending on the version chosen, lots of space for luggage and is dedicated exclusively to the transport of (many) people. Today we will focus on this version, but we will also mention the “work” Transit. The target? Understanding whether this particular hybrid system makes sense at work as well as with people on board.

From the outside, the Ford Tourneo Custom Plug-In (almost) never shows its nature

After understanding what we are talking about, let’s immerse ourselves in understanding what is the first plug-in hybrid commercial vehicle on the Italian market, Ford Tourneo Custom Plug-In Hybrid starting fromaesthetics. Both in passenger and cargo versions, our protagonist it differs very little from the traditional thermal version, if not for very few circumscribed details. 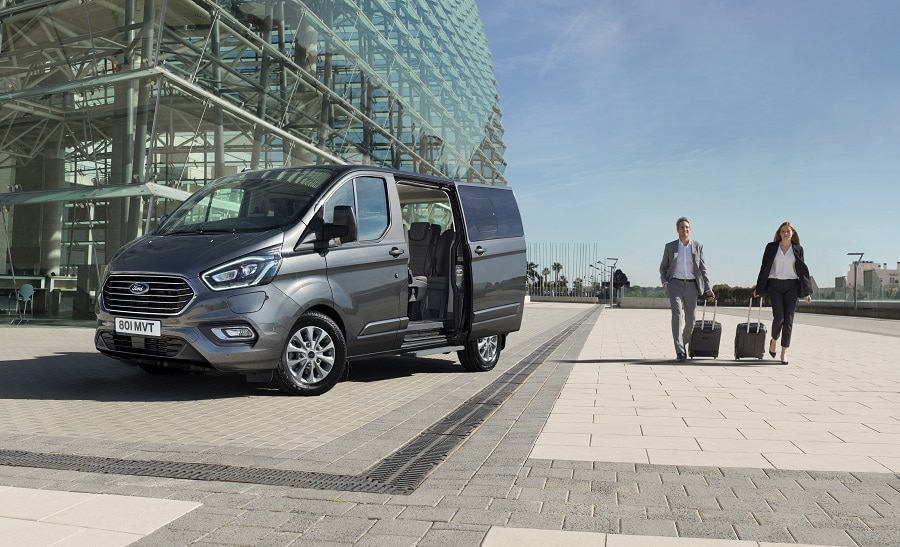 The front remains very characteristic, with the large Ford grille and very gentle and pleasant lines to be in a medium sized van. Laterally, then, we find ourselves in front of a large “cube” on wheels, as expected, with the forward cabin and two very large sliding doors. From the side, the “meat” of a vehicle that is commonly called the “medium” van can be seen very well. 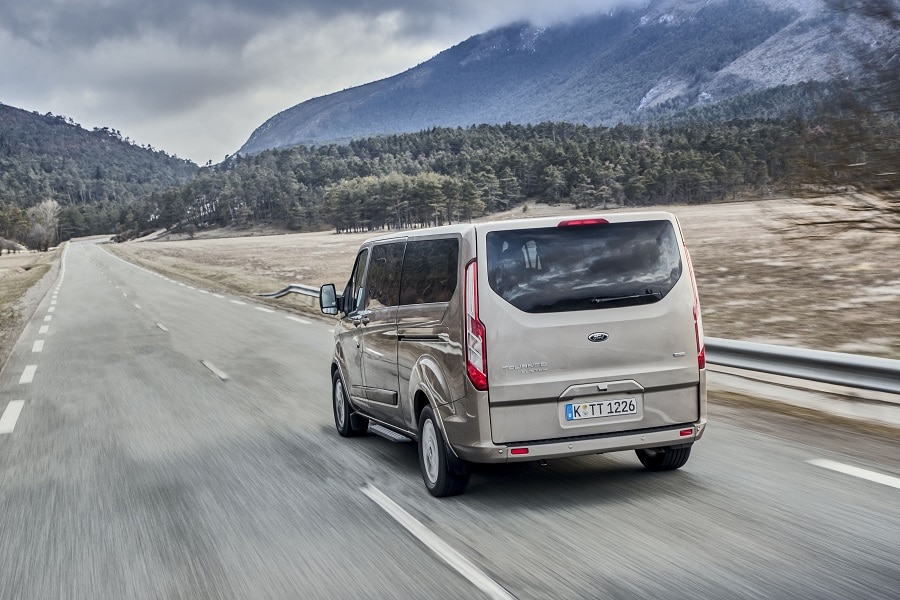 The plug-in version is available with a single body variant, that is with the “short” L1 wheelbase and the low roof H1, for both the cargo and passenger versions. So let’s talk about 4.97 meters long, by a’height of 1.98 m it’s a length really important, of 1.99 meters. And be careful in the city, because they become well 2 meters and 26 considering also the rear-view mirrors. From behind you can appreciate how massive it is thanks to the truly huge tailgate and full-height side lights. 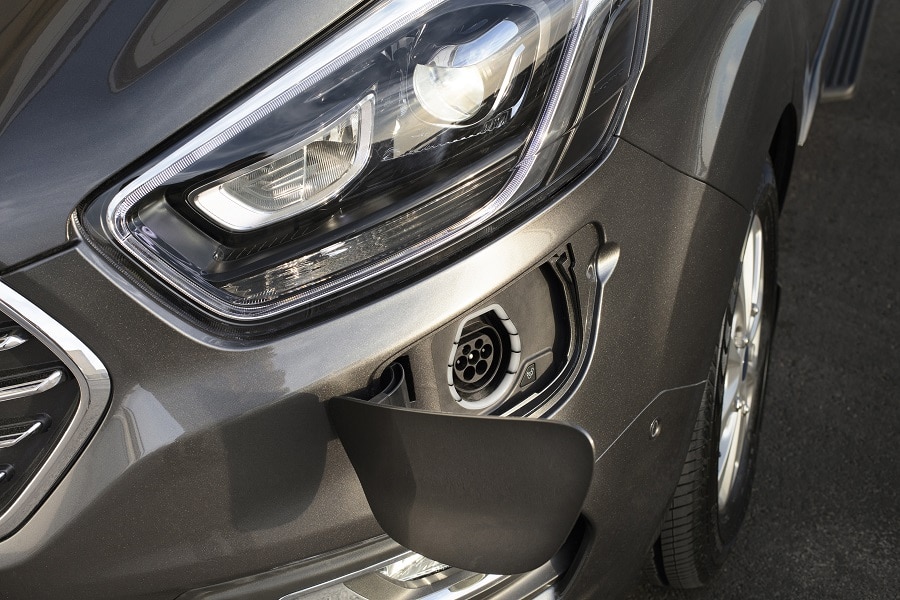 But how do you understand that you are dealing with the plug-in version? The aesthetic differences are only two. Behind, at the bottom right we find a badge Plug-in Hybrid, while returning front let’s find out flap for the charging socket under the left headlight, very convenient for “on the fly” refills.

Inside, lots of space and a dashboard… particular

If outside the Ford Tourneo Custom Plug-In Hybrid it points out its green soul only through two details, inside the “Find the differences” challenge is slightly easier. Overall, however, the Tourneo Custom is a very neat and well thought out van. As it should be, there are many compartments, vanes and storage doors scattered throughout the car, starting with the door above the dashboard, or the compartment next to the gear lever covered by a retractable grille. 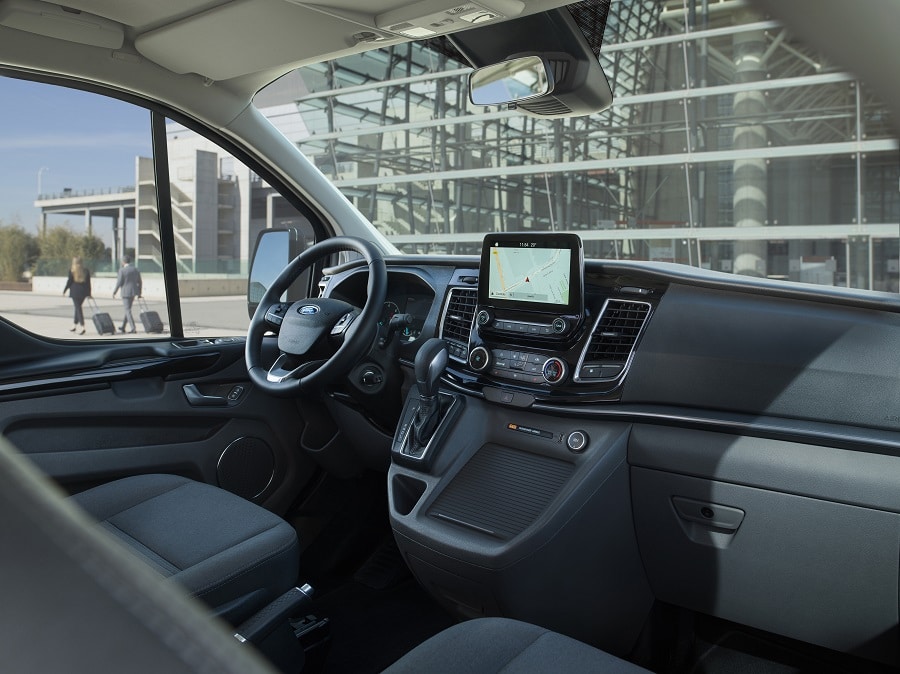 The infotainment system Sync3, the same that we know well about the most popular Ford cars such as Puma, Fiesta or Focus, equipped with an 8-inch screen and connectivity to Apple Car Play and Android Auto. The seating arrangement of the version we tested is from 8 places. Two in front, three in the second row in reverse and three more in the third row of seats. Behind then, opening the huge tailgate, we find space for numerous luggage (perhaps not enough to take all 8 people on board on vacation). Wishing, however, if more space is required, the seats can be removed, to have a Transit instead of your Tourneo. 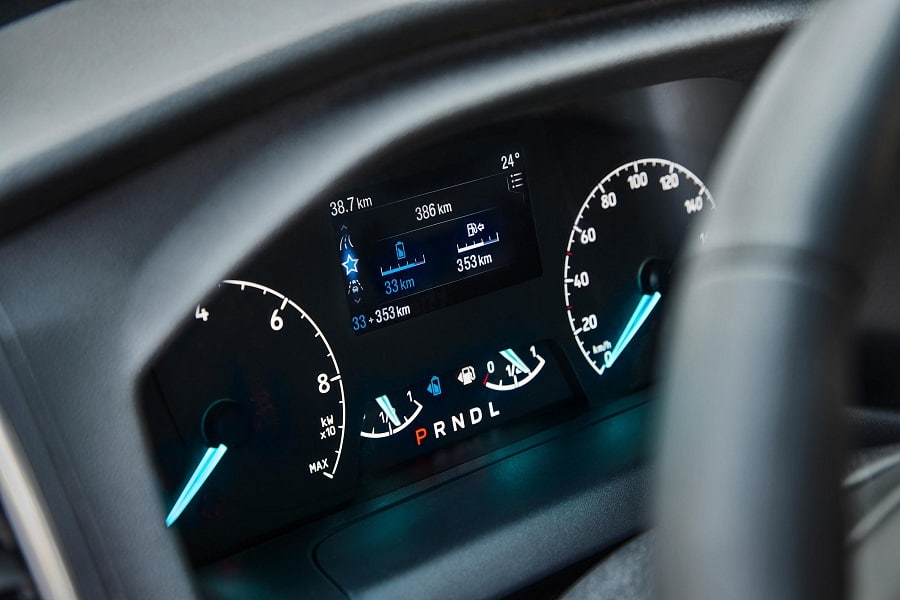 If you look closely, however, you can see the big differences between the traditional Tourneo and this Ford Tourneo Plug-in. The main innovations are two. The first is the automatic gearshift lever, present on the Transit range but which here sports a new letter, L, which will be fundamental in driving. Plus, the big difference is the completely redesigned dashboard. In fact, alongside the classic speedometer we do not have a tachometer, but a power indicator, from 0 to 10. This indicates the kW of power that the hybrid system is delivering at all times, obviously to be multiplied by 10. At the center then we find the multifunction screen, which will show the four main driving modes of this “green” van. Below this, finally, there are two indicators, one for the amount of petrol and the other for the remaining charge.

But what makes the Ford Tourneo Custom Plug-In so special? Under the hood of the only plug-in / range extended van

But what makes the Ford Tourneo Custom Plug-In such a special van? Its very special hybrid system. Although Ford calls it “Plug-In Hybrid”, in fact, we are not facing the classic hybrid “on tap”, with a heat engine and an electric motor of equal (or almost) power, as for example on the Ford Kuga Plug-In Hybrid. On the Blue Oval SUV, the internal combustion and electric motors can push both wheels, and they can work together or activate separately to propel the car as efficiently as possible.

None of this happens on our Tourneo Custom. We are in fact facing an electric vehicle, also equipped with a heat engine that deals exclusively with generating energy to recharge the batteries. It is therefore, more than a hybrid car, a true electric system with range extender, that is, with a combustion engine that is not connected to the wheels but generates only electricity. This is an innovative system among vans, but one we have already seen in the past. There BMW i3 REx, for example, the classic battery was flanked by a twin-cylinder petrol engine derived from motorcycle production. Then, how not to mention the Opel Ampera and Chevrolet Volt, the most famous cars with this technology. 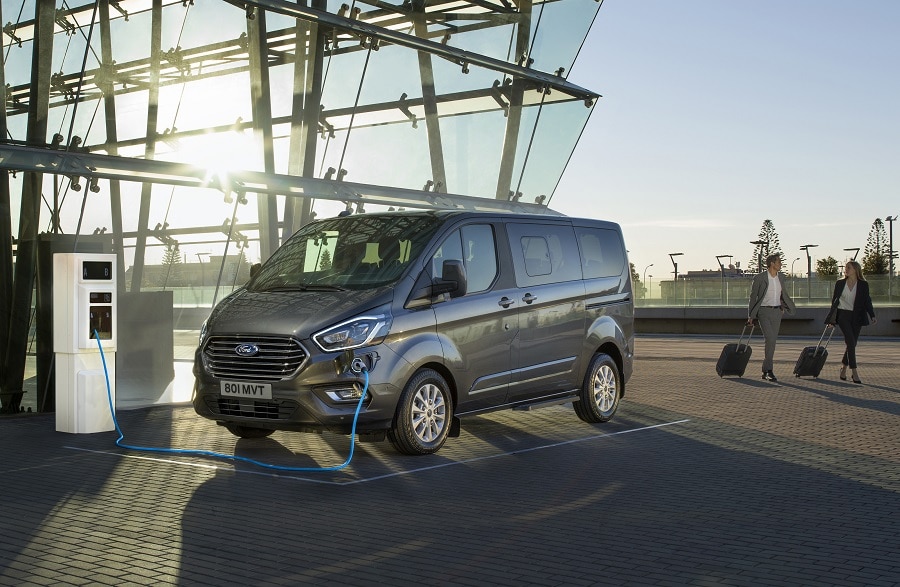 On Ford Tourneo Custom Plug-In Hybrid we have a front electric motor of 92 kW, or 126 hp, and 334 Nm of torque, which is the only engine in the system to propel the drive wheels. This is related to a rather compact battery, from 13.6 kWh, which is able to propel our van in purely electric mode for 56 km in the NEDC cycle. The recharge takes place in 4 hours and 15 minutes from the domestic socket, while from the Type 2 columns it takes 2.7 hours.

This limited autonomy, however, would risk making our van impractical without an alternative solution. Ford knows this well, and has also crammed the famous 1.0 EcoBoost engine under the hood, the three-cylinder turbocharger that we enjoyed so much on several Fords we tested. The House of Dearborn has not declared the power of the heat engine, but what we do know is that it is able to recharge the battery to guarantee autonomy total of over 500 km, always in WLTP cycle.

The gearbox is obviously not present, being an electric-powered vehicle, while with the selector you can choose to travel in mode L, Low. This mode allows you to recover a large amount of energy during braking, recharging the battery and stopping the van without using the brakes. The driver can then also manage the driving mode which he prefers among the 4 present.

But beware: we do not have “classic” modes such as Sport, Eco or Normal. The four driving modes allow you to manage the charge and delivery of the hybrid system in different ways …