Welcome back to our weekly appointment with In the mood for East, a column entirely dedicated to oriental cinema. Today we talk about Lee Kang-sheng’s Help Me Eros

Here we are on a new appointment with In the mood for East and with its specials dedicated to oriental cinema. Today we go back to Taiwan for the second time, after having already made a small trip to this island-state with Tsai Ming-liang. And we will talk about the Taiwanese director and screenwriter in a certain sense even today, given his close relationship with the author of today, Lee Kang-sheng.

Before measuring himself behind the camera, Lee Kang-sheng holds a artistic partnership with Tsai Ming-liang, becoming his fetish actor and appearing in all of his films (absolutely all!) as the protagonist. In 2003 he decided to pursue a career as a director, with The Missing, without forgetting the lessons learned from his great teacher. Lee Kang-sheng in his feature films in fact incorporates all the stylistic features of the most famous director, as well as the recurring themes and that melancholy and pessimistic taste that distinguishes his films – by his own admission.

The film we’re going to talk about today is Help Me Eros, his second work, as well as the one that has achieved the most success to date. Help Me Eros was presented at the 64th edition of the Venice International Film Festival, causing considerable dismay in the public. Obviously, here too we find the hand of Tsai Ming-liang, who participates as an executive producer and set designer. But not only that, and now we will see why.

Plot and trailer | Help Me Eros

Ah Jie (played by the same Lee Kang-sheng) is going through a dark period. His relationship with his girlfriend has just ended, he has lost his job and his affluent lifestyle suffers an abrupt end due to a stock market crash that causes him to lose all his savings. All that remains for the man is to console himself with marijuana, which he grows in his luxurious apartment, and seek solace in a “friendly phone” dedicated to would-be suicides.

At the other end of the phone is Chyi (Jane Liao), a portly girl neglected by her husband, with whom Ah Jie falls in love. The meeting between them is impossible, so he will begin to idealize her in every way. In particular it is the girl who works in the betel place under his house, Shin (Ivy Yin), to receive his attention. The two engage in some sort of sex and drug relationship, but that won’t save Ah Jie from her suicidal plans.

A thread that connects teacher and pupil | Help Me Eros

As already mentioned, it is impossible not to notice how much Lee Kang-sheng has “stolen” from his teacher Tsai Ming-liang. Sometimes there is almost the doubt that behind the camera there is the second one. First for one stylistic question. The actor and neo-director keeps the camera mostly fixed (although we notice a greater propensity for movement) and uses shots from unusual angles, with a tendency to favor the whole figure rather than the emotions that transpire from the faces. Because this is not a cinema made up of faces, but of details, of sensations. 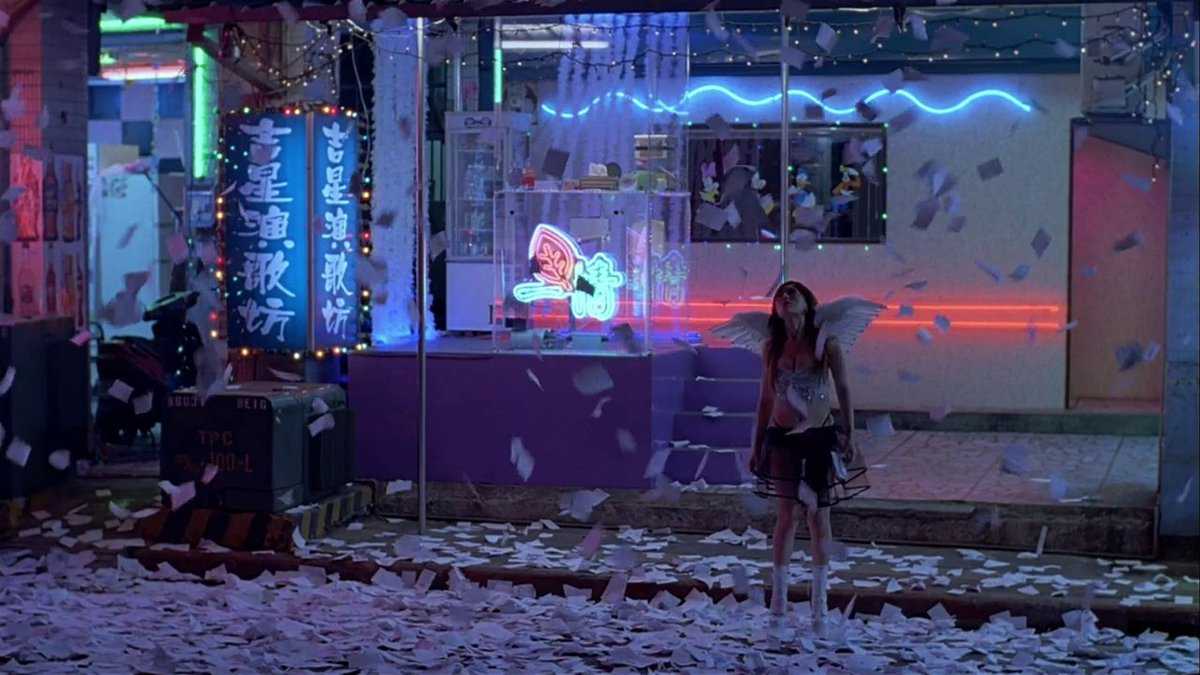 The second question that unites the two authors is that thematic. In both poetics they stand out with violence loneliness and the search for love. All the main characters share an unbridgeable condition of loneliness. Ah Jie just lost everything: on a human level (his girlfriend), and on a material level (money, home, job). What kept him connected to the world no longer exists, and this leads him to desperately seek support through the phone or in physical contact with strangers. Chyi is the voice in which Ah Jie finds refuge, but her life is far from perfect. Trapped in a body in which she no longer recognizes herself and in a relationship with a man who does not want her, she has nothing left but to take refuge in food. Shin, to get by, has to commodify and show off his body, leaving it at the mercy of passing men, sometimes getting too involved with his customers.

A cry for help | Help Me Eros

Needless to say, the natural habitat for these lonely souls is there city ​​immersed in the night, with its neon lights, its noises, the clubs, the people passing by. The metropolitan darkness that swallows lonely and desperate lives, inevitably destined to unhappiness, the common denominator of the human being. It swallows their bodies, whatever forms they may have: perfect and less perfect, displayed or hidden from view, bodies imbued with nothing. 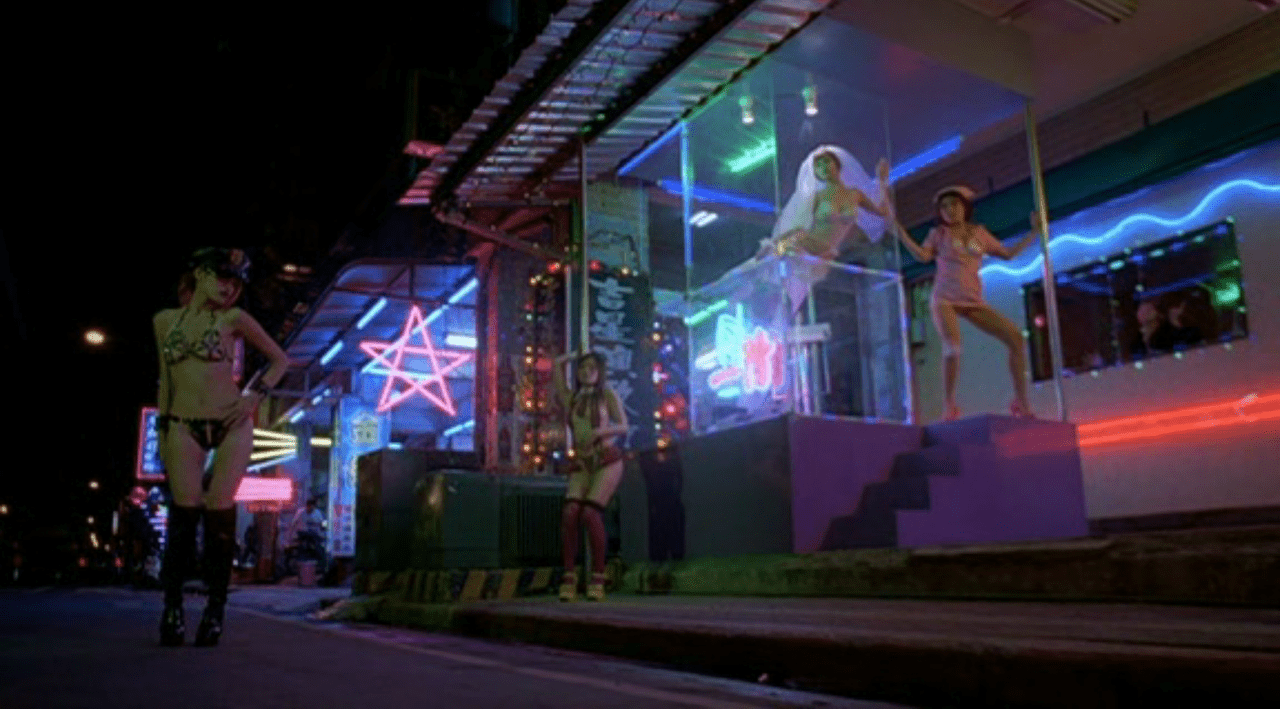 Fundamental elements in this representation of humanity are eros and food, as happened in The taste of watermelon (2005), once again Tsai Ming-liang. Ah Jie and Chyi seek solace in the lush pleasure of sex (cold, acrobatic) and food (hot, almost alive), but that little comforting moment is the most ephemeral there can be. Because in the end everything is just an appearance. The characters seek comfort in each other’s body, in breaking away from the rule, but they cannot find it. Their dissatisfactions are sought, united, but inevitably rejected. Each of them launches their own cry for help, which will never be heard, because after all we are always and in any case alone and unable to be in the world.

Lee Kang-sheng is inspired by real life experiences to represent theincommunicability of our times. A theme that has certainly already been seen elsewhere, but which still maintains its dignity here, showing how the director has something to say, also and above all thanks to his emotions put at the service of cinema. At the same time the debt with Tsai Ming-liang is strong, especially on the aesthetic level (and what an aesthetic level!), But the young director manages not to disfigure even in front of his expert teacher. With Help Me Eros, in fact, not only a careful look at the staging is dedicated, but also a profound look at one’s soul.

Keep following our page dedicated to specials on cinema and TV series, where you will find new appointments every week!