The Tokyo 2020 Olympics are now fully underway and the participating athletes have already competed and won many medals. On the occasion of this edition of the competition, an official video game of the Olympics was also released, simply called Tokyo 2020 Olympic Games – The Official Videogame. Not many people know, however, that the tradition of creating bespoke video games of the Olympic Games is a long-standing tradition, which began in 1984 with Hyper Olympic: let’s see what it is.

Hyper Olympic: the forerunner of the Olympics games

Known in the West as Hyper Sports, this unique video game was published and developed by Konami in 1984, as a direct sequel to Track & Field, another sports title heavily focused on athletics. Hyper Olympic fully embraces the soul of arcade video games and, like its predecessor, it is a video game dedicated entirely to the Olympics.

Although both games were created in honor of the Olympic Games, only the Japanese arcade cabinet versions of the game bear the official logo of the sporting competition. The game also arrived in western arcades offered a selection of seven different disciplines, in which players could compete to get a score based on his performance.

As per tradition, for the arcade cabinets of the time it was necessary a certain level of “tweaking” of the game controls to be able to complete the races in record time. Specifically, the action was associated with a joystick and the alternating and rapid pressure of the keys to jump. Since to move the character it was necessary to move the joystick quickly from right to left and vice versa, this title soon earned the name of “joystick smash”, as it was very common to break the lever in an attempt to go faster.

The disciplines available were swimming, clay pigeon shooting, archery, triple jump, pole vaulting, weight lifting and horse racing, and a certain number of points had to be scored to advance to the next level of competitions.

The future of the saga

Having enjoyed good success in arcades, Hyper Olympics has also landed on several other platforms, such as Commodore 64, Amstrad CPC, and ZX Spectrum. In these versions, however, the game lacked multiplayer and pole vaulting discipline, a factor that deprived it of some of its appeal.

Hyper Olympic is to all intents and purposes a historical video game which must be assigned the title of real precursor of all games inspired by the Olympics. Among other things, this Golden Age Konami title also had the great merit of being a avant-garde product for the time, with top-notch graphics and animations, and even realistic consequences for too much effort, such as sweat and pain. 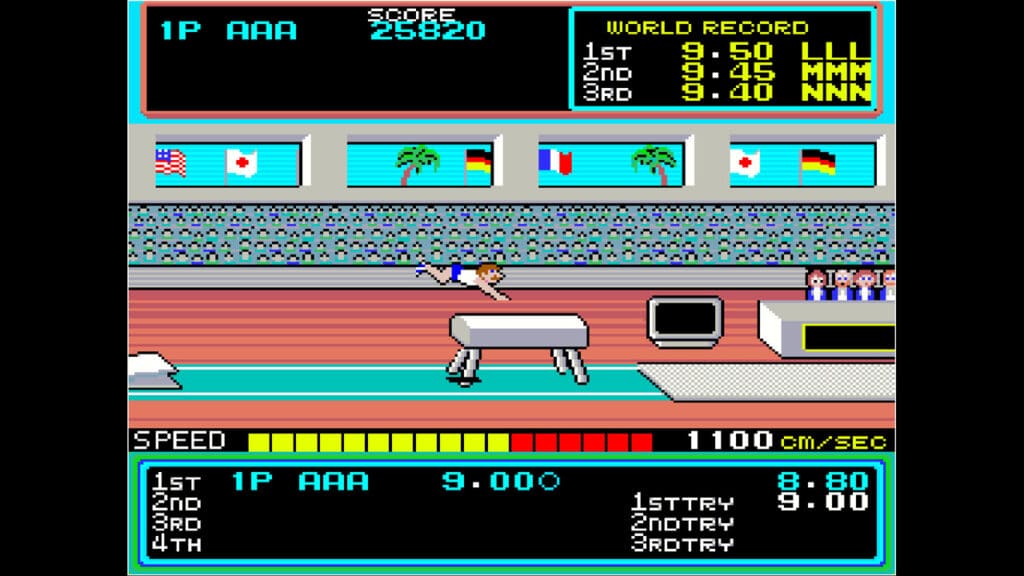 Hyper Olympic then released three sequels for MSX, each containing from three to four disciplines and which overall could include completely new ones, such as diving, curling, cycling and trampoline. The series then disappeared from the radar for a long time until recently, more precisely until 2018, when the Japanese house was planning to launch Hyper Sports R.

This modern version of the historical video game however never displays the light, since was canceled for reasons still largely unknown today. The postponement of the Tokyo 2020 Olympics to this year probably played a role in this decision.

The task of developing the official game of the Olympics was therefore entrusted to SEGA, and it seems that the Hyper Sports saga will have to wait a few more years to make a comeback.