After the charismatic De Tomaso and the nostalgic Autobianchi, we return to the surroundings of Milan where, just in conjunction with the company founded by Edoardo Bianchi, another car company was born ready to wage war against the great Alfa, Lancia and above all FIAT. And the Innocent, a company born in Milan in 1933 but which in the 1950s and 1960s began to find its space thanks to the Lambretta motorcycles and cars, British produced under license. Behind Innocenti there is a small world of opportunities seized at the right time, mistakes, union revolts of the 70s and excellent projects left too soon. Are you curious to know it? Welcome to Auto for Dummies, the column that tells you the history of the car world in a simple way. Ready to go to the Lambro bank?

The first years of Innocenti marked by Lambretta

As per tradition, let’s start with the first cries of today’s House, Innocent. The company was born in 1933 in Milan from his lively fwaver, Ferdinando Innocenti, originally from Pescia, in the province of Pistoia. The Tuscan entrepreneur had in fact been the protagonist of several companies in the region of origin from a very young age, and he decided to move to Milan to take advantage of his experience in steel production.

In the neighborhood of Lambrate, Innocenti founds a company specializing in joints for steel tubes, the famous Innocenti tubes still used today in construction scaffolding. After a decade of good results in the steel industry, however, the turning point came for Innocenti in the 1940s. The production, due to the entry of Italy in the Second World War forced Innocenti to convert civilian production for the war industry. In this context, scaffolding joints are almost useless. So Innocenti decides to bet on mechanical production, which will later become the main branch of the company.

At the end of the Second World War, Milan was the Italian city most affected by the Allied bombings. Among the rubble of the city, not even the Innocenti factory in Lambrate was spared, almost razed to the ground. It was time to roll up our sleeves. Thanks to the huge demand for scaffolding for reconstructions, Innocenti, thanks to its clamps, had lifeblood, which allowed the company to think about expand into another market. Which one though? It was precisely at that moment that Ferdinando Innocenti had an illumination.

Innocenti drew inspiration from American motorcycles arrived in Italy during the war, and learned the necessary knowledge to produce these means from the collaboration with the Allies in the Liberation. Innocenti also noted their spread even after the conflict was over. A simple, robust, easy and cheap vehicle, perfect for Italy ready to leave again. So it was then that Innocenti added his own to the pipes and scaffolding first means of transport, the Lambretta.

The Milanese anti-Vespa, from the failure of the first version to a true antagonist

Born in 1947, a year after the legendary Vespa by Piaggio, compared to the concentration of style and romanticism of the creature from Pontedera contrasted a more pragmatic, more… Milanese approach. The first version, the Lambretta M, was developed in Rome by Innocenti engineers, who escaped the Nazi occupation of Milan, and was the simplest and most robust one could think of. The motorcycle had visible mechanics, a tubular frame with separate bodywork, 7-inch wheels and even lacked the rear shock absorber. 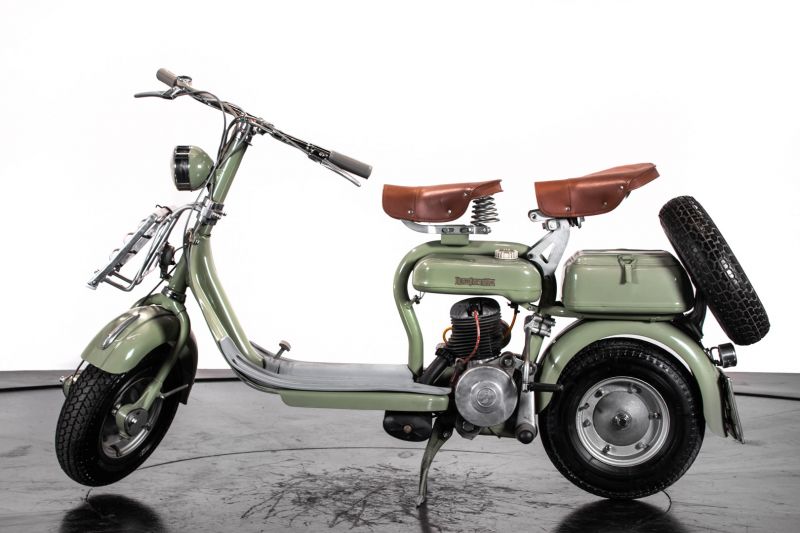 The finishes, however, were very accurate, the electrical cables were not visible and the ignition key and case were identical. The price, however, was more than double that of the rival Piaggio, also due to the impracticability of the Lambrate plant. The Lambretta, named in honor of the Lambro river, on whose banks the Innocenti factory was located, had to wait over a year to receive the version ready to rival the Vespa, the Lambretta B. The wheels go up to 8 inches, larger and therefore better both on potholes and in road holding. A suspension finally arrives at the rear, and the gearbox switches from the pedal (uncomfortable on a scooter) to the classic handlebar gearbox. Now, then, the Innocenti plant in Lambrate was back in use and ready, allowing Innocenti to summarize all its workers and above all to lower the price of its Lambretta. 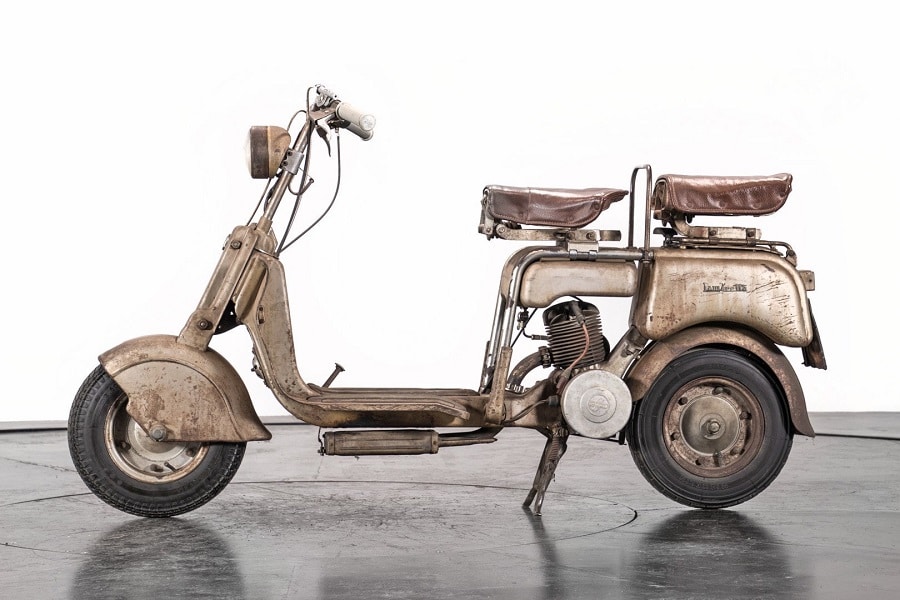 With his engine 125, the typical split and spacious saddle and the visible engine, the Lambretta became the anti-Vespa par excellence. Young Italian families, eager for a private means of transport, invaded the streets with Vespa and Lambretta, with these two still sharing and sharing preferences today. The Lambretta was also produced under license in many countries (Germany, France, Spain, Taiwan, Brazil, Colombia, Argentina) but above all in India, where the Lambretta had a resounding success ending production only in 1997. The Italian production instead came up to 1972, when the Italians, now devoted to the car, abandoned scooters as their main means of transport.

The arrival of the British: the agreement between Innocenti and the British Motor Company

In the meantime, however, with the success of Lambretta, the son of Ferdinando Innocenti, Luigi, had another dream. Given the success of the family business in a field until the Lambretta debut never experienced, Luigi Innocenti dreamed of landing in the world of the automobile. Ferdinando Innocenti, however, did not look favorably on the car, because he (rightly) believed it was far too expensive to produce a good car from scratch, and that it was impossible to make war on a colossus like FIAT.

And, in fact, he was undoubtedly right. A simple motorcycle like Lambretta was sustainable by the small Milanese company, but the car was a completely different commitment. Also, once Innocenti’s intentions are discovered it was FIAT itself that vetoed Innocenti’s entry into direct competition. The Milanese company, in fact, along with pipes and motorcycles also produced industrial presses, and was the first supplier of these machines for FIAT. The Turin-based company then prohibited Innocenti from developing a rival car from scratch. 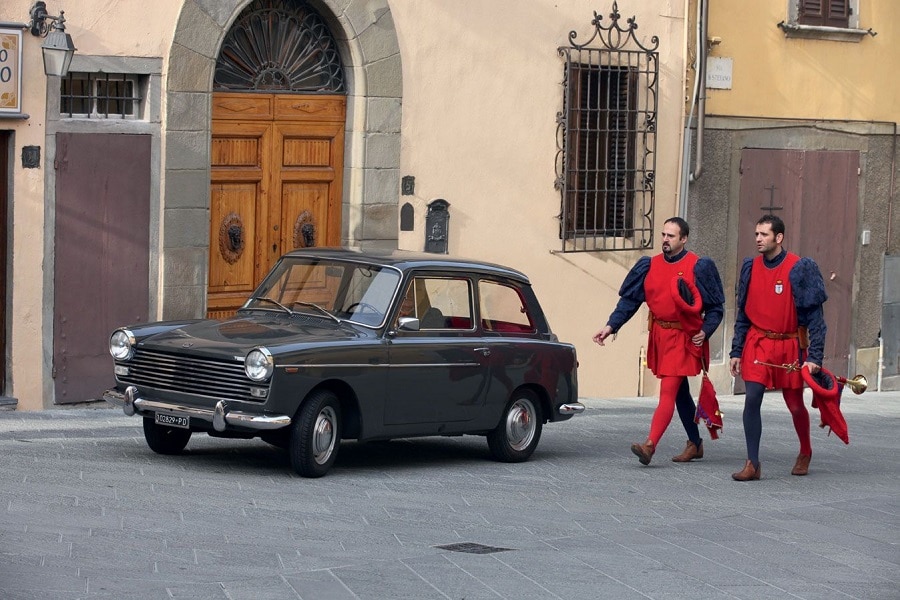 But, as they say, made the law … made the deception. Luigi Innocenti, now more and more involved in the fortunes of the company, began to contact various European companies for the production under license of foreign cars. In fact, at the time, in order to preserve national companies, rather important duties and taxes were envisaged for imported cars. For this reason, a company that committed itself to the production of licensed cars was a great opportunity for many manufacturers. However, it was there BMC, the British Motor Company, which convinced Innocenti to produce his own Austin A40 Farina. 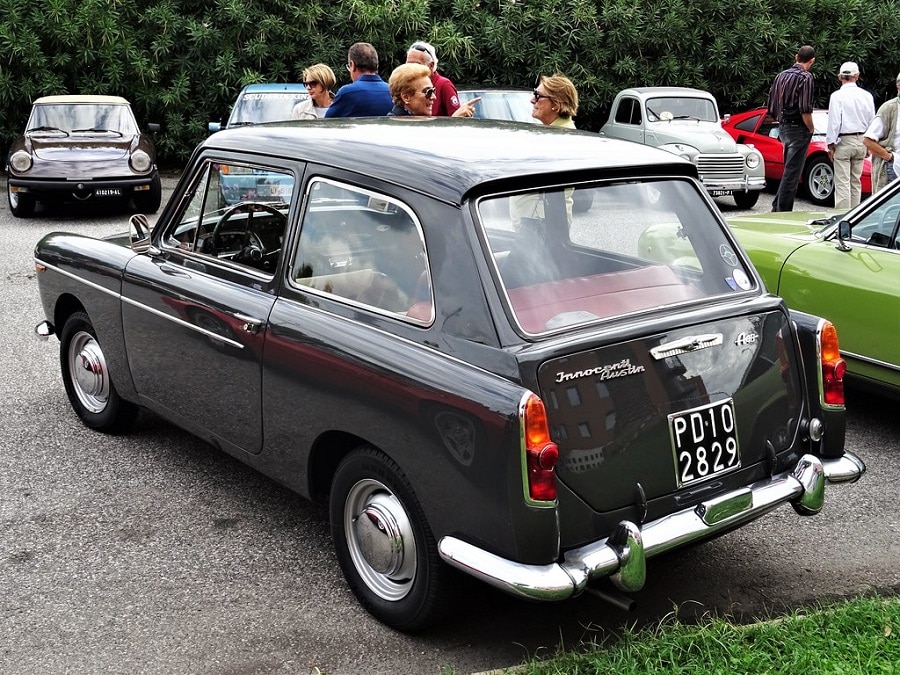 It’s about a medium sedan, which, as the name implies, has a bodywork designed by Pininfarina, and Austin A-Series engines between 950 and 1200 in displacement. The A40 is an elegant and refined car, practical but with a touch of elegance and luxury which made it different from any other FIAT car. This brought down the veto from Turin, and so onì Innocenti signed a seven-year agreement with BMC. As we will see, 7 years is a very short time for real planning, allowing Innocenti to navigate only “on sight”.

The success of the Innocenti A40, and the arrival of the 950 Spider and the IM3

The new Innocenti A40 began to leave the Lambrate plants in 1960, sanctioning the debut of the Milanese manufacturer among the greats of the Italian car. The automobile, for its part, had its success. Elegant, pleasant to use and different from the usual FIAT, Lancia or Alfa Romeo, the A40 produced in Italy also had a huge advantage over the Austin relatives made in England: the quality and finishes.

Although aesthetically and mechanically it was identical to its British counterpart, the Italian A40 sported better assemblies, more refined finishes and superior category car equipment. This led the Innocenti A40 to obtain a excellent sales success, almost unexpected for the first car of an emerging company. The problems of the agreement in a clearly disadvantaged position with the English giant, however, made themselves felt soon. Despite the quality of the Italian A40s, Innocenti had written in black and white on the contract with BMC the obligation to sell its products only on the national territory. No exports therefore, for a car that with its build quality could have convinced customers all over Europe. 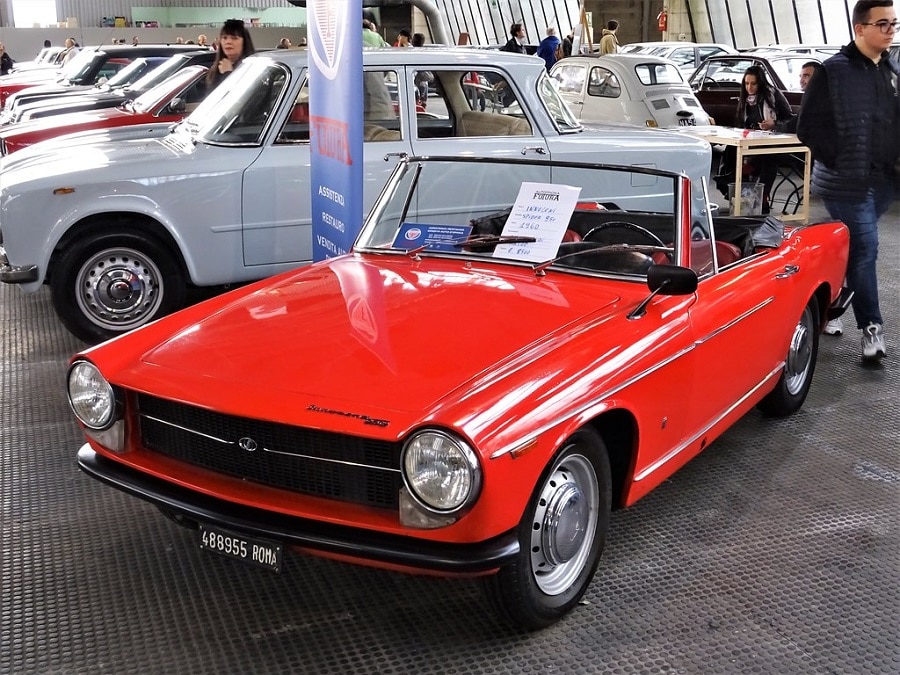 Despite this, however, the collaboration with BMC allowed Innocenti the chance to have access to a series of very interesting and valid mechanical bases. In addition to the Austin A40, in fact, at Lambrate they exploited the mechanics of another excellent English car, the legendary one Austin-Healey Sprite, to produce the first “original” Innocenti at least in terms of aesthetics, the 950 Spider. Equipped with the same 43 HP 950 engine as the Frogeye Sprite, and later the more powerful 58 HP 1100, the 950 Spider sports a typically Italian line created by Tom Tjaarda, Ghia’s leading designer. 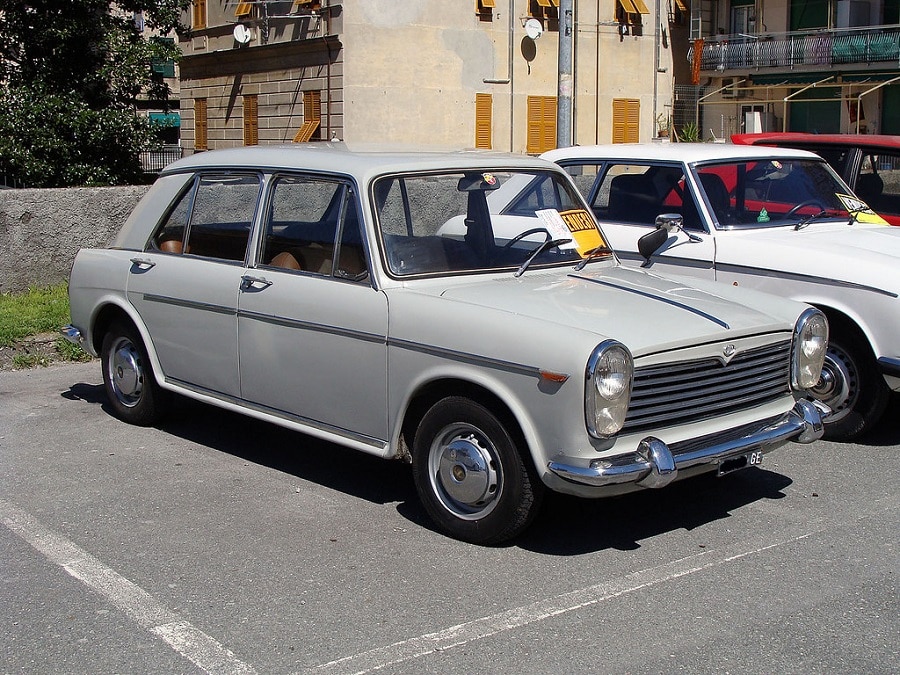 The coupe version was also born, the Innocenti C, and in total about 7,000 sports cars left the Lambrate factories between 1960 and the 1968. After this exploit, in the 1964 also came the tInnocenti’s first car, the IM3. The Innocenti-Morris Third Model it was nothing more than a revised and corrected version of the Morris 1100, a mid-range sedan but larger in size than the A40. Equipped with a front revised by Pininfarina, the IM3 and the “sisters” I4 (equipped with the same front as the English Morris, 48 ​​HP engine instead of 55 and simplified interior) e I5 (identical to the IM3 but with an English front) they made room thanks to a excellent value for money.

In recent years, there was also a coupe equipped with the V6 Ferrari Dino. Innocenti and Ferrari worked closely and also made prototypes, but in 1964 the project was surprisingly wrecked. The collaboration with BMC, on the other hand, was going just fine, but in 1965 everything changed for the better.

In fact, in that year, BMC decided to give Innocenti its flagship, the MINI. In reality, the MINI was already sold in Italy by BMC under the Morris and Austin brands, but success was limited. Due to customs duties and taxes on import cars, the beautiful and practical MINI car as popular as in the UK was the elite subcompact, and therefore very little … 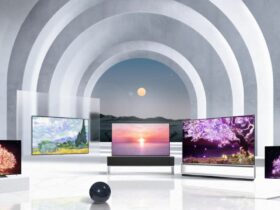 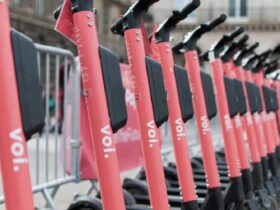 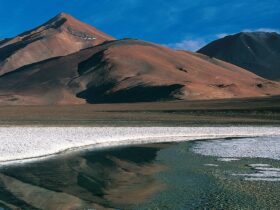 BMW Group focuses on the efficient and sustainable extraction of lithium 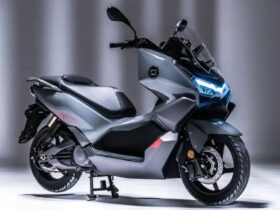 Super Soco CT, here is the maxiscooter with 125 km / h of maximum speed