In this review we will talk about Into The Pit, the title published by Humble Bundle that takes inspiration from the classics of the FPS genre

In the last decade, the first-person shooter genre has established itself as one of the most successful in the videogame market. Titles like Call Of Duty e Overwatch have redefined the rules of this type of video game and involved millions of players, who meet daily in online games characterized by a frenetic pace and an unimaginable amount of bullets. Despite the enormous success achieved by these modern titles, there is a slice of the public that is still interested in playing FPS with similar characteristics to those of the titles that marked the first season of this genre.

Simultaneously with the increasing popularity of contemporary titles, the demand for games that refer to the style of classics such as Doom e Quake. Into The Pit, which we will talk about in this review, falls into this category: it is a shooter that takes inspiration from the titles released at the turn of the 90s and the advent of 2000. Let’s find out together if, in addition to the experience nostalgic, it is capable of giving the player a noteworthy experience.

The descent into the abyss

We begin our review by illustrating the plot of Into The Pit, even if within the game’s economy this plays a far from primary role. As per tradition for this genre, the story narrated by the title is very simple: the protagonist is a charmer in search of his missing sister and, to find her, he will have to descend into an abyss inhabited by monstrous demons and commanded by an evil sorcerer.

As proof of its secondary nature, the development of the story is linked to the few interludes that occur during the game. The Into The Pit development team has in fact preferred to use playability and aesthetics to define the identity of this product. Precisely to ensure that this has its own unique identity, the team has opted to insert within it elements attributable to the genre of roguelite. These, which we will see in detail below, are useful to make the title attractive to today’s public. 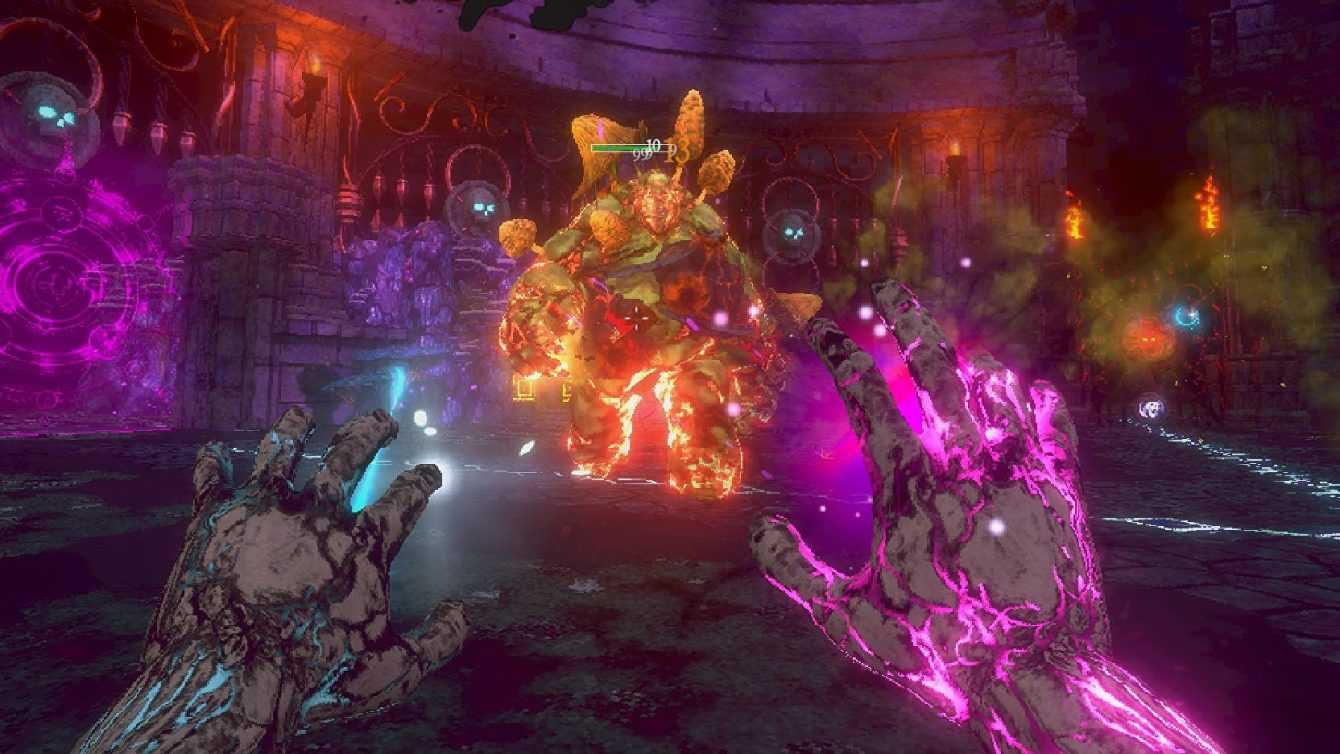 The Power of Magic – Into The Pit Review

Although the title is undoubtedly the central element of this, the gameplay it is not particularly complex. The title is divided into levels, each of which is made up of several rooms and, to have access to the next stage, it is necessary to enter it and complete some tasks. Obviously, within these environments we will find a rather large number of demonic creatures waiting for us, but the game is worth the candle: in addition to allowing us to proceed, exploring the rooms allows us to collect the resources necessary to purchase the upgrades.

To combat the creatures that haunt the abyss, we will have a attack spell for each hand and, to cast these spells, we will use the left and right mouse buttons. At the beginning of our descent we will also have the possibility to choose one passive ability. Every time we emerge victorious from a room we will have access to an upgrade for one of our shots or to the learning of a new skill. As the game is related to the genre of roguelite, the death of the character will not only force us to restart our descent into the abyss, but it will make us lose all the upgrades and all the skills acquired.

In fact, the whole game is based on the repetition of this formula: enter a room, kill demons, collect resources, exit and power up. The high rate of discounts and the wide variety of enemies help prevent this mechanism from becoming suddenly boring but, despite this, the game tends to sin when it comes to longevity. 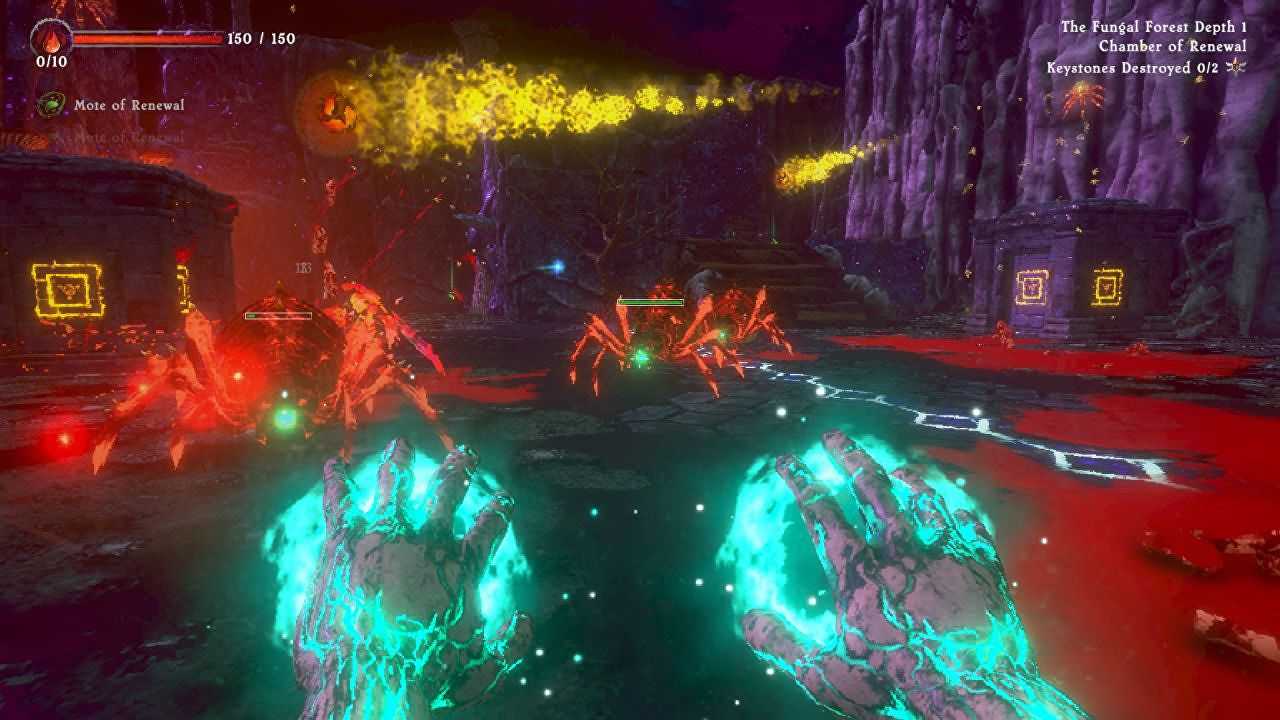 Exploring the Darkness – Into The Pit Review

In this review we have not yet talked about the aesthetics of Into The Pit, which is undoubtedly one of the elements that distinguish this title. The game uses a deliberately retro 3D graphics, which is useful to recreate the typical atmosphere of old school shooters and, at the same time, opts for cold and acid color palettes to paint its environments. Thanks to this, the scenario takes on a hellish and lysergic aspect, which contributes not a little to the creation of one fascinating visual identity.

The appearance of the demons is not particularly original, but it is still effective and sufficiently in line with the general aesthetic. The element in which the game is instead lacking is the level design. Despite their attractive appearance, the rooms the player is called upon to explore are all too similar; in particular, continuing with the game the repetitiveness of the scenarios, both in appearance and in structure, becomes painfully evident. 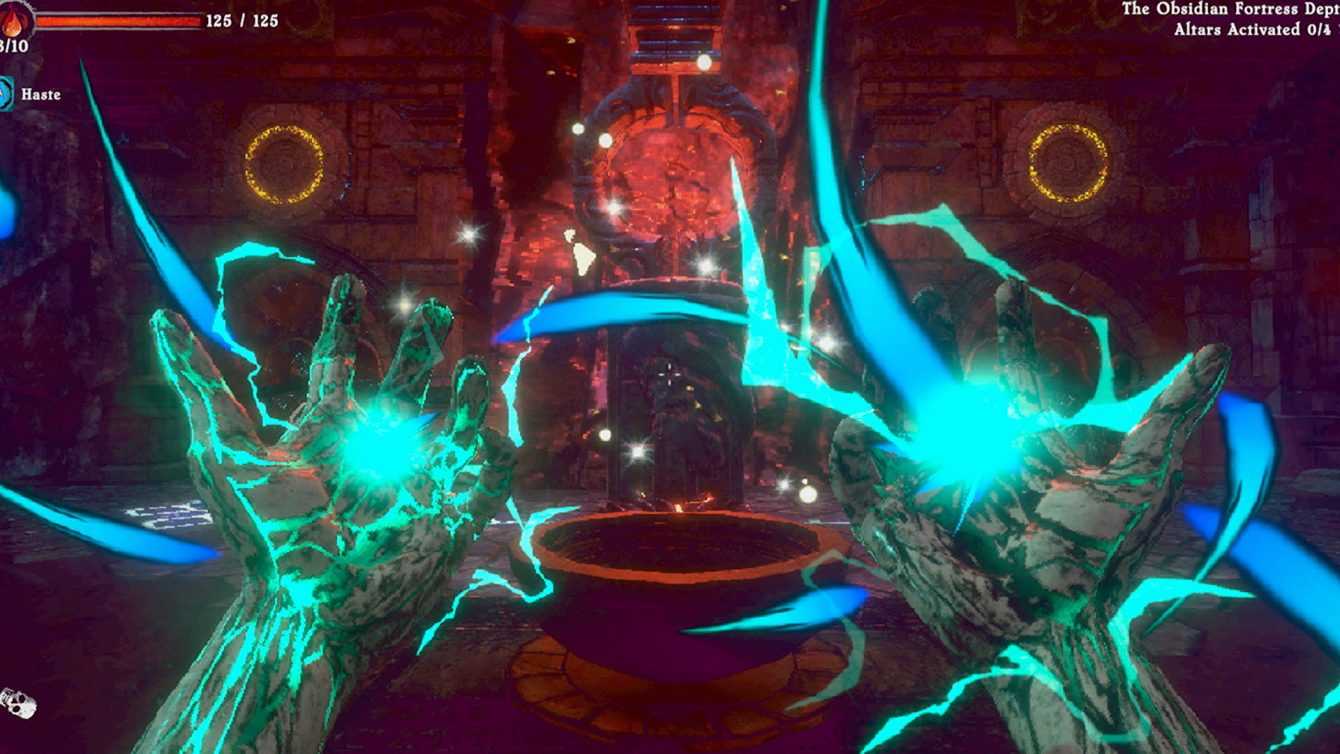 At the end of this review, it is quite clear that Into The Pit is a game with a fun gameplay and one captivating aesthetics, pleasantly poised between retro and lysergic, but at the same time lacking in longevity and depth. These limits probably depend on the choice of the development team to aim for the creation of a simple game, with easily learnable characteristics.

The game is therefore intended to make players happy who are looking for a product that does not take too long to learn and that is fun from the first moment; on the other hand, users who are interested in a deeper gaming experience will not find what they are looking for here. Also in this Into The Pit is consistent with its genre of reference, which has always stood out for its preference for action and simplicity over complexity.

Into The Pit was released on October 19, 2021 and is available for PC and Xbox One. Continue to follow us on TechGameWorld.com to read reviews, guides and insights dedicated to the best video games of the present and the past. To buy this and many other titles, you can use the Instant Gaming platform.