Apple wants to remove the notch from iPhone 14 Pro and it now seemed certain that he would achieve his goal by moving the Face ID under the display. But the latest rumors instead speak of a double punch-hole in the screen: a pill-shaped one for the camera and a circular one for the Face ID. Both visible on the screen, forming a sort of horizontal lowercase “i”.

iPhone 14 Pro, the Face ID in a circular punch-hole, not under the display

The news had first come from Ross Young, a screen expert who had procured an image of a prototype of the screen of the iPhone 14 Pro. In the photograph, i was clearly visible due punch-hole. One in the shape of a pill to allow the selfie camera sensor to collect a lot of light. The other circular for the infrared of the Face ID.

The analyst had expressed the opinion that the punch-hole del Face ID it would be invisible once the screen was turned on. But new rumors suggest that Apple does not want to hide the sensor.

The image above shows the back of the screen, we would see the circle on the right

The rumors also suggest that this design will arrive only for Pro and Pro Max models, while the standard and Max versions (6.7 inches but without the camera upgrade) could keep the notch.

However, both the presence or absence of the notch in the basic versions and the fact that the circular punch-hole is visible or not are based on rumors. What we do know is that in all likelihood it is two-hole screen posted by Ross Young is in development. But how Apple will decide to use it is still an unknown.

The reflective material on the Face ID remains a viable hypothesis: infrared to recognize the face does not need as much light as the cameras. It seems likely that Apple is carrying out tests to evaluate its effectiveness, and then decide based on the results.

There are still nine months left until the launch of the iPhone 14, much more information will arrive in this time. We keep you informed.

Horizon Forbidden West: the tribes and the realism of the game described by Guerrilla 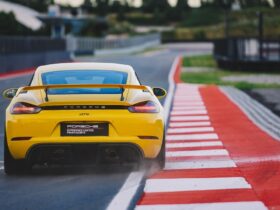 The Porsche Experience Center Franciacorta is born, the largest in the world