There are few cars in the world that have been able to channel the passion of an entire country onto them. Cars that after decades of life still know excite those who love the world of motors. And, as always when it comes to emotions, these types of cars are love and hate at the same time, divided between those who dream of them and those who just do not understand them. In Italy, these emotions are similar to a car in particular: the Lancia Delta.

42 years after his birth, thanks to its rally successes the Delta is still loved by all car enthusiasts, and for this reason to say the least discussed in its reincarnations, always guilty of not having respected the aura of the first, mythical generation. But where does the myth of the Delta come from? Today we will find out by taking a journey through the history of Delta, from the launch of the first series in 1979 to the mistreated second and third series up to the hypothetical (electric) future of the legendary Deltone. Ready? Say hello to the Queen.

The genesis, the first Lancia Delta: Ritmo platform, designed by Giugiaro and with several innovations

Let’s start with the birth of the first Lancia Delta. Are in the late 1970s: Lancia is now well within the FIAT Group, it has abandoned its historic factory in Borgo San Paolo to try to become a power in the global automotive world. Alongside the larger Beta, the first Lancia produced under FIAT influence, a small entry Lancia was missing from 1976, given that in that year the legendary Fulvia had greeted the price lists.

In fact, as early as 1973 Lancia began work on the new small sedan, project code Y5. The Lancia top management decided to make a clean break with the past: goodbye to the old Lancia platforms, welcome instead to new Ritmo platform, modern and capable of bringing more safety and technology as a dowry. In FIAT, however, they knew very well that they had to differentiate the two models well. The Lancia customers, as the documents and statements of the FIAT managers of the time say, it was considered “more demanding, refined and qualified”: a mere duplicate of the Ritmo would have been unacceptable.

For this reason, Lancia decided to modify the Ritmo base to install one more refined mechanics, with the adoption of bars front and rear anti-roll and, above all, of independent front and rear suspension, both of the McPherson type. A decidedly more expensive and complex solution, but that it only brings advantages on the road: more comfort, more stability, better response on the holes. THEPlus, Delta’s lines had to be more elegant and refined than the popular cousin Ritmo. For this the pencil was entrusted to Giorgetto Giugiaro, the great Turin designer behind some of the most iconic cars of the last 50 years. Its design is simple but fits perfectly: Delta is an elegant and square hatchback, as the stylistic features of the time wanted. 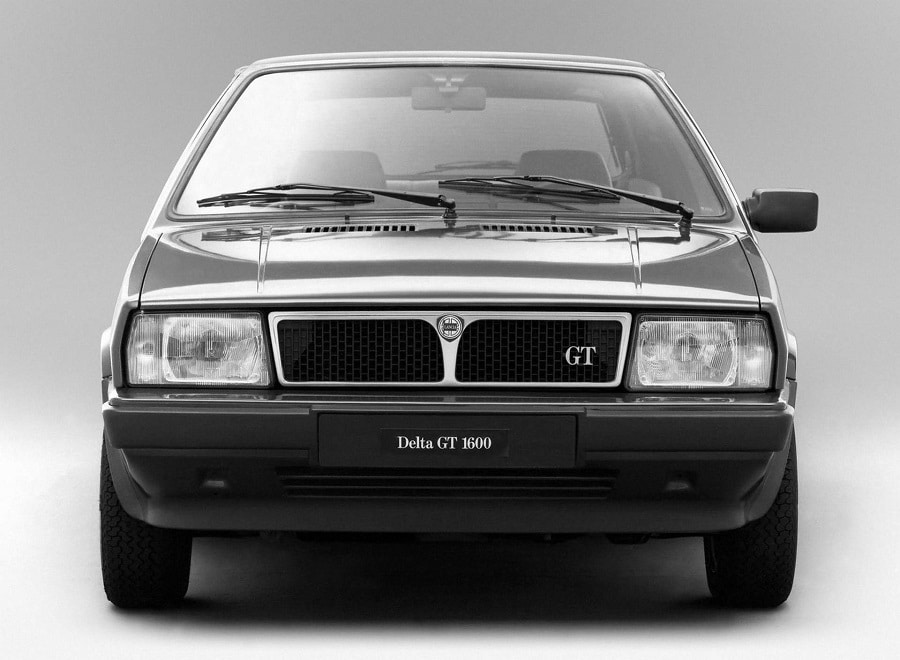 The front, with the classic stainless steel Lance shield, it was nestled between two square headlights, and the whole car was designed in a trapezoid pattern, with a short, compact tail and a steeply sloping rear window. The interior space is good for the passengers, while the trunk is a bit narrow due to the short tail. The interiors, on the other hand, are modern, complete and made with care, such as the seamless seats and the polyurethane foam dashboard. 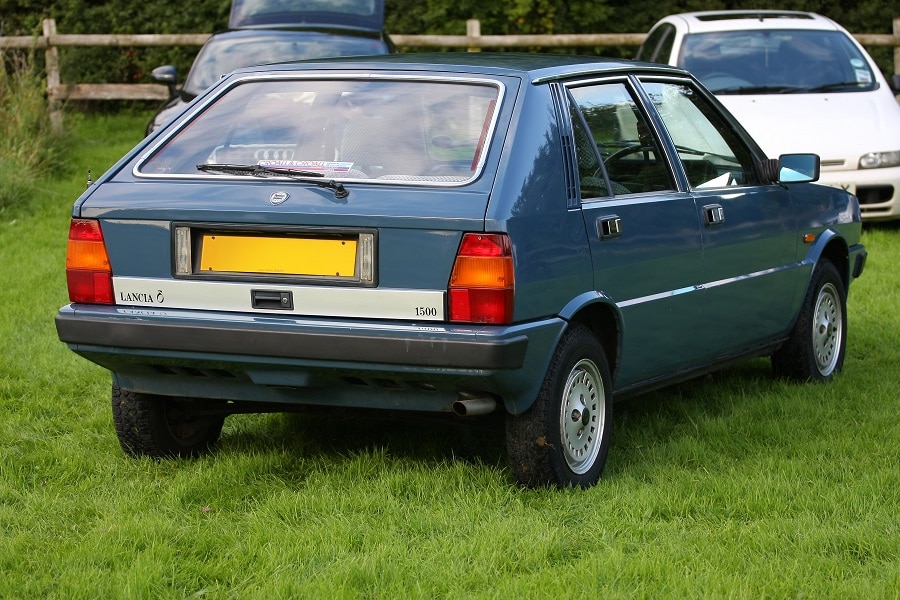 Delta, however, has returned to offer real ones cutting-edge innovations, as per Lancia tradition. In addition to the rear independent wheel suspension, Delta incorporates the innovation of the glass fiber reinforced plastic bumper of the Rhythm. This solution, lighter and better able to absorb shocks, is however declined with matching painted bumpers. The reason? Simple: to offer a much more refined and refined aesthetic. In addition, Delta also offered air conditioning, clock with stopwatch, headliner in standard fabric, heated rear window with iodine wiper and headlights and with double reversing light, without forgetting the mirrors adjustable from the inside. On the more equipped versions that will arrive later then Delta will also offer electric windows, on-board computer, automatic climate control and automatic transmission. Not bad for the time, right?

The success: Lancia Delta is Car of the Year 1980, a good chassis and a lot of comfort are the advantages of the Y5 project 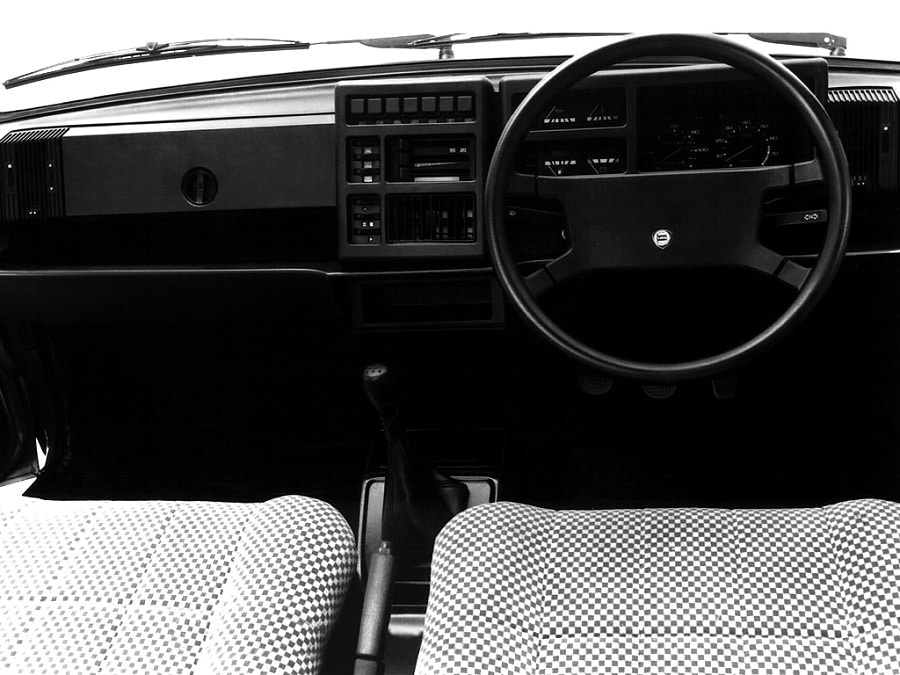 Delta’s success was immediate: sales flocked, with Lancia customers who appreciated the quality of the finishes and the silence, reminiscent of the best Lancias of yesteryear. Despite FIAT’s hand, in fact, the quality and refinement were that of the old Fulvia and Flavia, who had made hundreds of lancers fall in love so much. The Delta project, however, took good basic driveability from the Ritmo, which thanks to the Lancia care based on independent suspension, stiffened chassis and anti-roll bars gave even more driving pleasure. 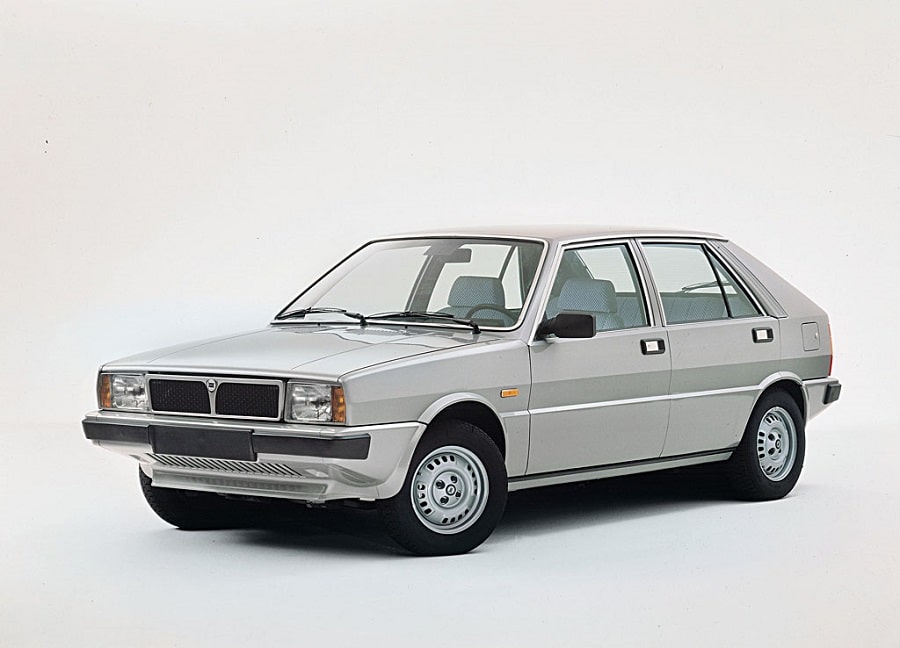 In addition, the internal silence, the quality of the finishes and the galvanizing of the bodywork (which eliminated the rust problems of the Beta) made it increasingly popular and appreciated. And the Giugiaro line was its strong point: typically 80s, square but at the same time dynamic and spacious, with its shapes it convinced more and more customers in Italy and beyond. The Lancia Delta therefore in its first year of life convinced the lancers, sportsmen and those who were simply looking for a car that was pleasant to drive, beautiful and comfortable..

A success that was quickly recognized not only by sales, but also by the specialized press. Indeed Lancia Delta came proclaimed Car of the Year in 1980, the first and so far only Lancia to obtain the prize. In the first year of production, 45,000 Deltas came out of the Lancia plant in Chivasso, which reached more than 100,000 units by the end of 1981.

Curiosity: the Lancia-Saab 600 experiment, which led to the air conditioning and the Lancia Thema

Another feature that made the Lancia Delta very popular, especially in colder countries, was his excellent heating system. Very avant-garde, it exploited its excellent power with a stratified heat distribution, making the Delta perfect even for cold climates. The credit, however, was not all of the Lancia technicians, but of the fundamental help of a manufacturer that knows the cold well: Saab. 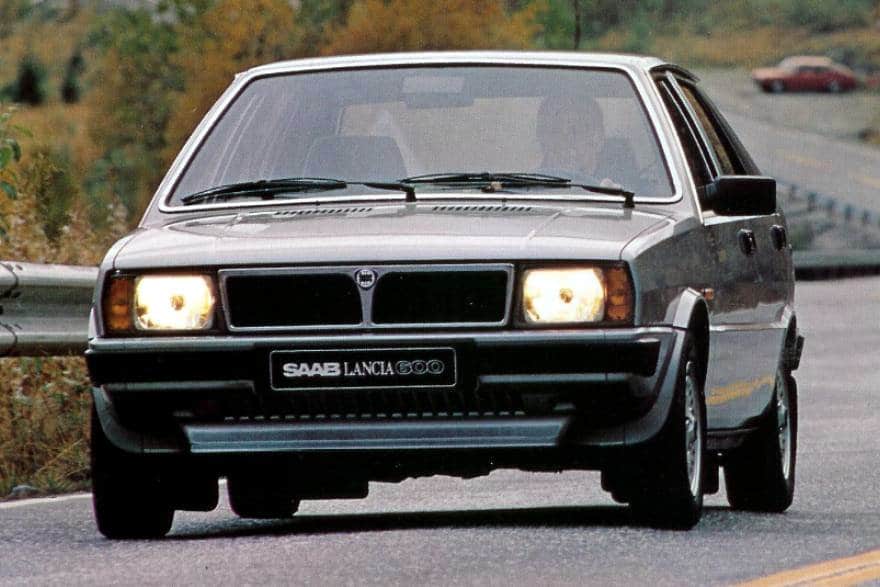 The Swedish company, in fact, had established one in 1978 collaboration with the FIAT Group. The objectives of this collaboration were mainly two. The first was to equip the small Swedish company with a compact car, smaller than its own proposals, as a substitute for the entry-level car of the range, the antiquated 96. In addition, Saab and FIAT created the platform together Type 4, which was the basis of 4 high-end cars: Saab 9000, FIAT Croma, Lancia Thema and Alfa Romeo 164. But that’s another story. 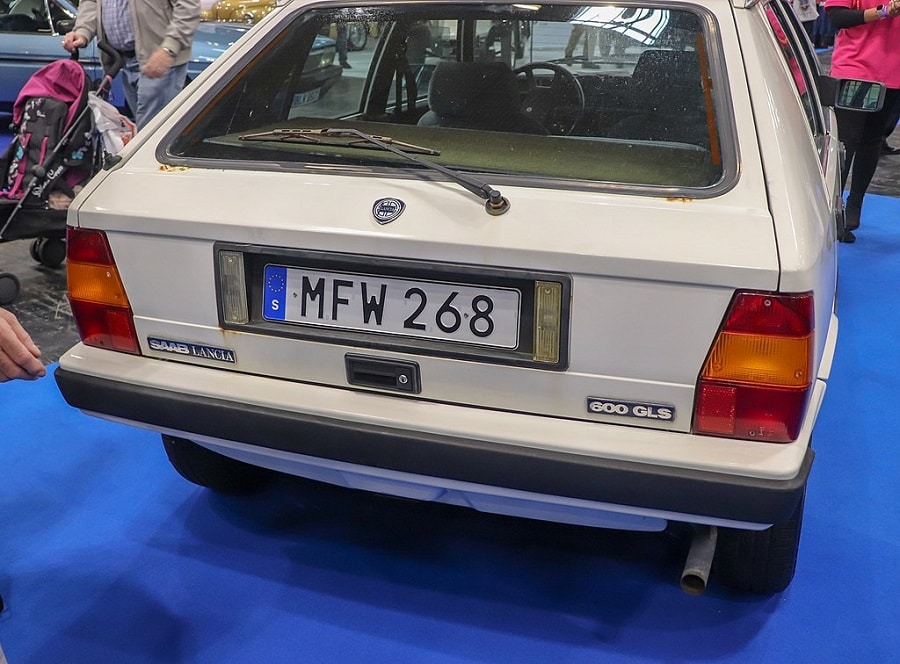 So Saab chose to market the Delta in Sweden, Norway and Finland under the name of Saab-Lancia 600. For this Saab studied a heating system suitable for his country and his very demanding customers. The Saab-Lancia 600 was equipped with the 85 HP 1500 engine, two trim levels (GLS and GLE) and headlamp wipers, mandatory in Sweden. In addition to these differences and the double Saab-Lancia logo, the 600 was identical to the Italian version, but it did not have the hoped-for success. In fact, only 6,400 Saab-Lancia 600s were sold between 1980 and 1987.

Here are the first sports versions: 1600 GT and HF Turbo

Outside of Scandinavia, however, Delta continued to like it. Its success then led Lancia to decide to expand the range. At the time, in fact, FIAT and Lancia were reluctant to improve and “upgrade” their models: the instability of the market resulting from the oil crisis of the late 1970s in fact did not make it wise to expand the range of a model. But Lancia Delta proved to FIAT to deserve new engines, taking advantage of the driving pleasure that customers liked so much. 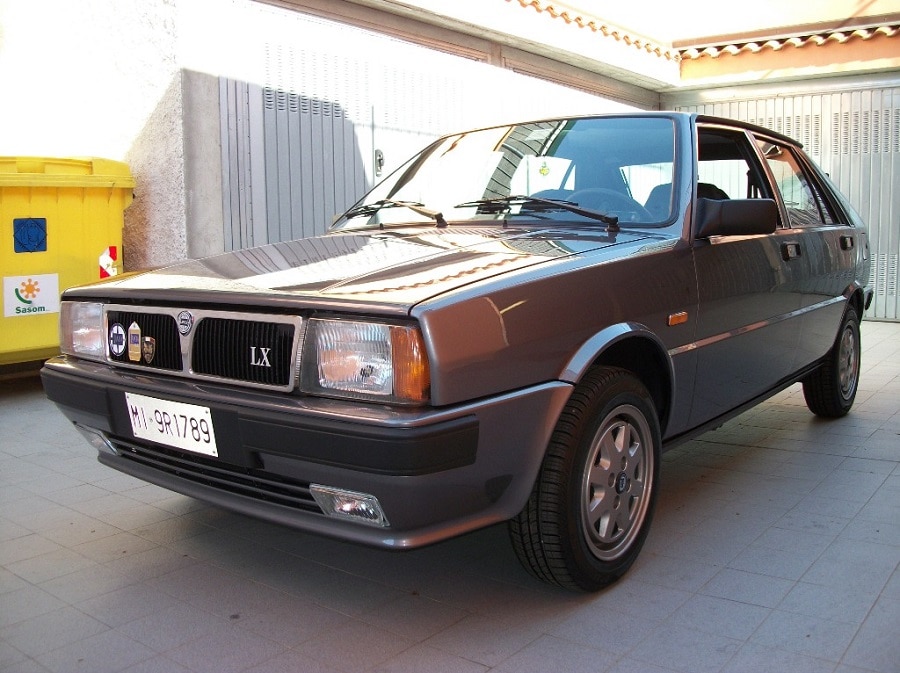 In 1982 the versions arrived LX, the most luxurious. Equipped with 13-inch alloy wheels, electric windows and heat-insulating glass, they were the top of the Delta range, which in the 1983 she did her makeup again. The bumpers have been redesigned and made in a single piece, while the satin grille disappeared behind, one of the few details not appreciated by customers. Among further improvements to the interior upholstery and other small innovations, the first, shy sports versions of Delta, the 1600 GT and 1600 HF Turbo. The name of the second takes up the initials High Fidelity, which characterized the Fulvia HF that won in rallies in the 70s. The engines, on the other hand, were based on the 1600 twin cam Lampredi seen on the sportiest Ritmo, the 105 TC. 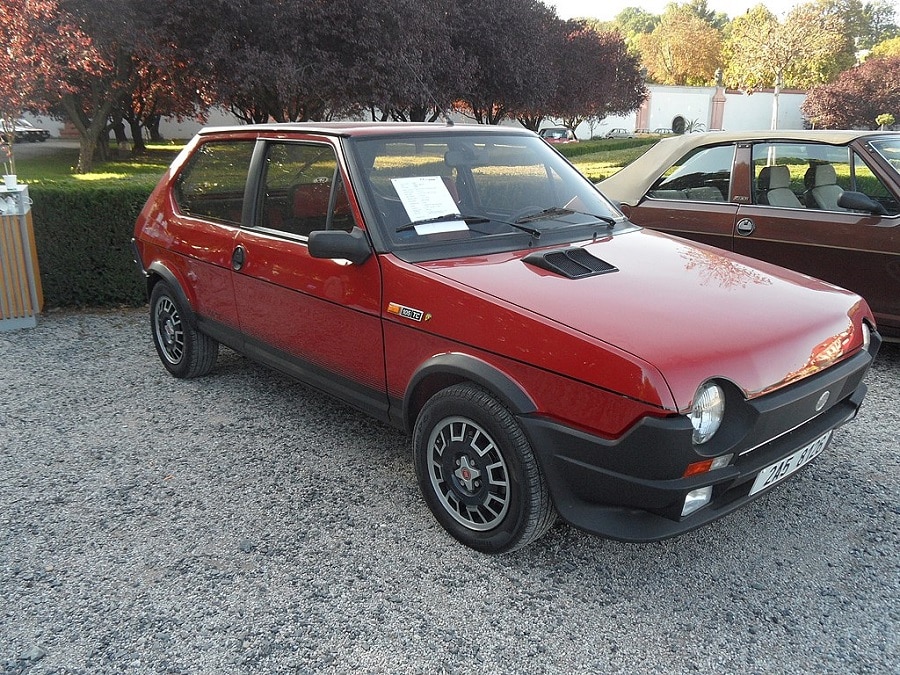 On the 1600 GT, the engine was the same as the “cousin” Ritmo, equipped with 105 CV, 5-speed gearbox and very brilliant performance. The top of the range version, however, was the 1600 HF Turbo: a turbocharger was added to the 1.6 twin cam which brought power to 130 hp. In addition, the suspension became stiffer, the rims larger and the brakes became disc brakes at the rear as well. The power of 105 and 130 hp was no coincidence. They were in fact the same powers as the sports versions of the Ritmo, the 105 TC and 130 TC. The two Delta sports cars were in fact complementary to the Ritmo, not rivals. 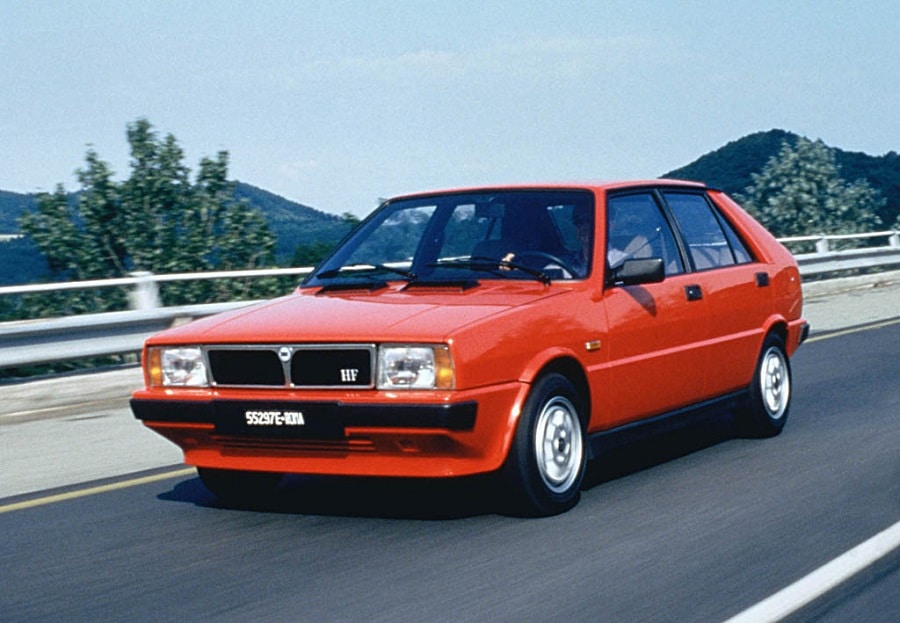 The FIAT Ritmo TCs were in fact only available with 3 doors, and they were spartan and uncomfortable, no frills. For who from his sports car he was also looking for refinement and usability, the answer was Delta. Always available with only 5 doors, and equipped with the same well-finished interiors as the others, the Delta GT and HF were the sports cars for every day.

The turning point in the history of Lancia Delta: the Rally. The shy (and tragic) debut with the Delta S4

The decision to create a sportier perception around the Delta name was not accidental, and it turned out to be Lancia’s real stroke of genius. With the exit of production of the Beta Montecarlo and the Beta HPE, in fact, the emotionality of the Turin manufacturer could risk disappearing. In addition, the mythical 037, winner of the World Rally Championship in 1983, was by now capitulating under the blows of integral cars such as Audi Quattro and Peugeot 205 T16. 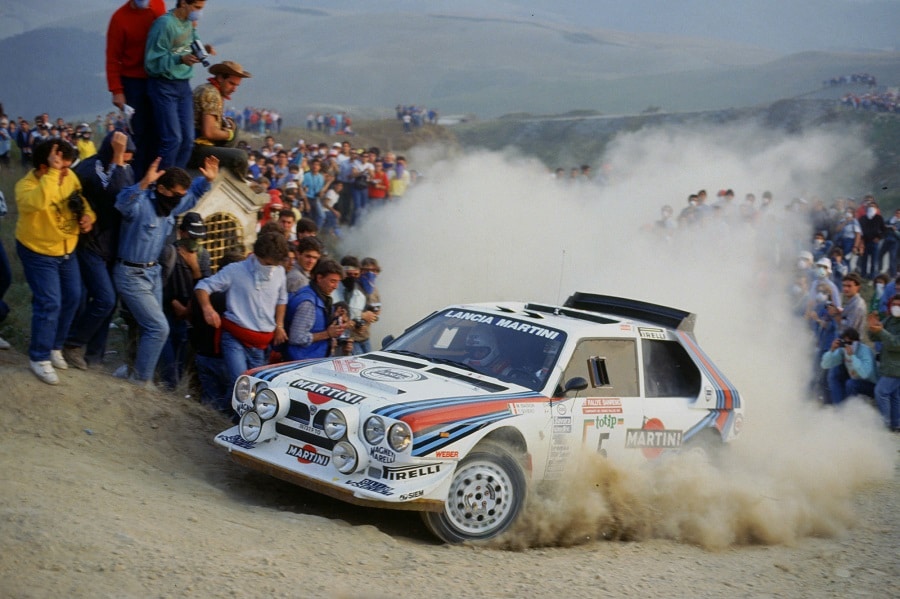