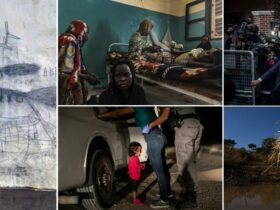 The Leica Oskar Barnack Awards 2019 are an important photographic competition that gathers numerous participants every year and always gives us excellent shots to observe and understand. Let’s try to analyze the winning shots to understand what these great photographers can teach us

Leica Oskar Barnack Award 2019 is a competition created for professional photographers and this year awarded the ability to tell the relationship between man and the environment with a sequence of at least 10 shots. It is therefore a very deep research because harmonizing a dozen shots is not easy and requires a lot of time, dedication and talent. Leica Oskar Barnack Award Newcomer is instead the competition aimed at young people who have not exceeded 28 years of age to give the opportunity even to those with less experience to see their work rewarded. The overall winner of the Leica Oskar Barnack Award 2019 receives an award of 25,000 euros and also a Leica M kit with lenses worth 10,000 euros; instead the winner of the Newcomer category receives “only” a cash prize of 10,000 euros plus a Leica M kit. The 10 selected finalists instead receive a prize of 2,500 euros. Let’s now pass to the analysis of some winning shots.

Mustafah Abdulaziz’s approach to his monumental series is his own way of elaborating his own understanding of water as a universal theme. For over eight years he has been traveling the world in search of metaphorical or suggestive images that capture the meaning that water can have. When considering the work involved in the series, Abdulaziz offers a glimpse into his particular way of thinking and how the project came about. Here is what he says about the series that won the jury of the Leica Oskar Barnack Award 2019:

“Acqua” is a long-term photographic project that tells how human beings interact with the natural world and what this means for our civilization and our future. In this sense, it is my first attempt at such dimensions. My visual approach to the work on “Water” could be distilled down to naturalism and simplicity in perspective and scale. I am incredibly wary of unnecessary complexity and try to limit the tools I use to find creative and honest methods to observe a topic that encompasses every aspect of the human experience. 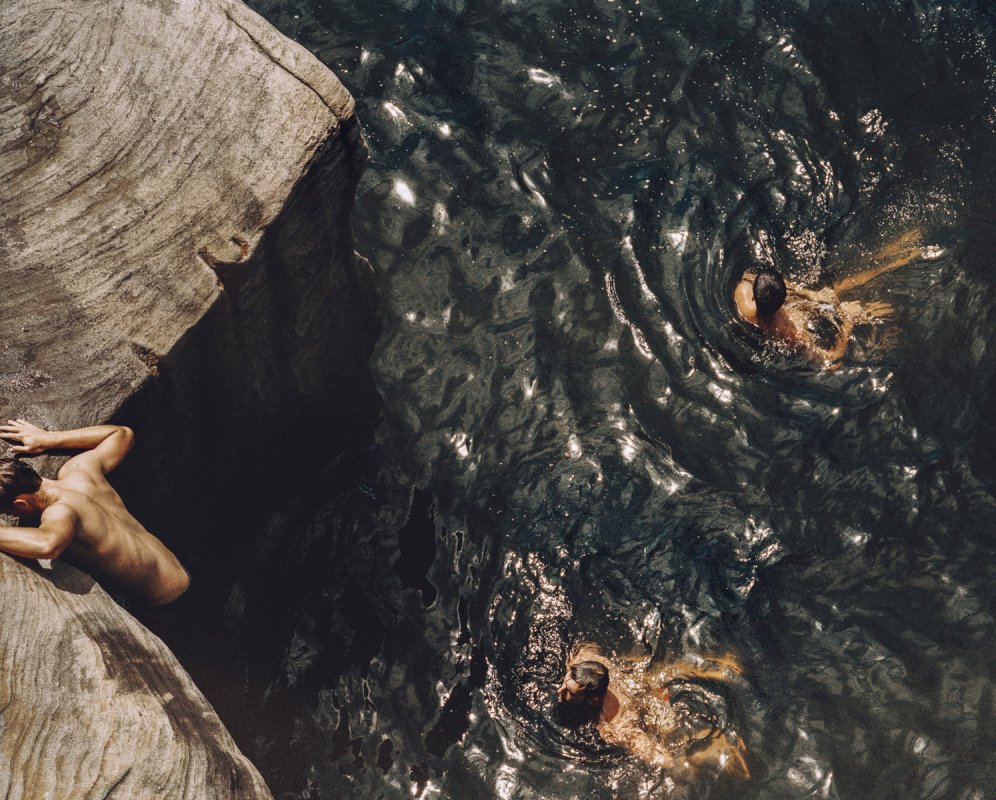 For example, in this shot the 3 subjects form a triangle that gives a certain dynamism to an image that in itself is very simple. The positioning of the three boys is not trivial: two of them help to create a diagonal line that cuts the entire image in half, guiding the gaze along the composition; secondly we notice that all three are positioned close to the edges, as if were the frame to the protagonist of the series which is obviously water. The use of color is very basic: we have one two-tone tone with the green of the water and the pink-brown of the rocks and the boys; these are complementary pastel shades that make the composition simple and harmonious, but with an impact. 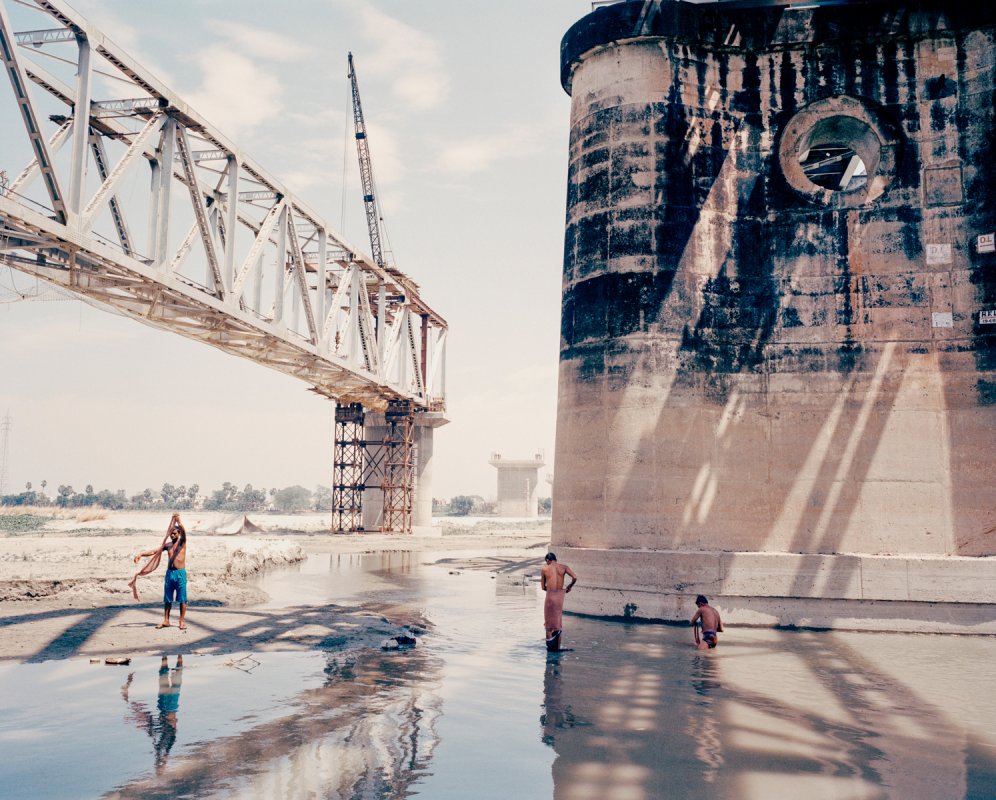 This one shot already more complex than the previous one has several more elements, but it is always simple and well composed. We immediately notice the use of pastel shades: this slightly saturated color grading discharges the confusing power of color, giving the image a simpler and more placid atmosphere. The contrast between the dimensions of human subjects and infrastructures stands out: not only geometry, but also a semantic contrast can give life to a strong dynamism. The relationship between human activities and water in this shot is however very evident. 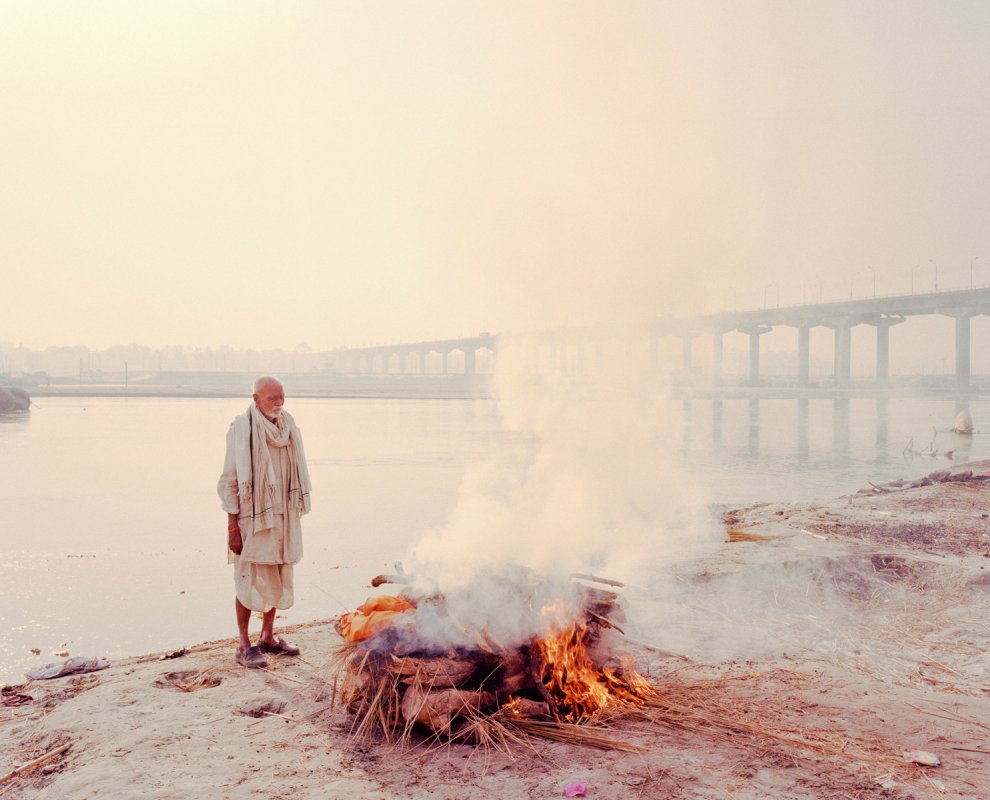 Water is life, but also death. For centuries in eastern countries there has been the tradition of entrusting the bodies of loved ones to the waters of rivers. The most famous case is the Ganges in India, but traces of this custom have also been found in the ancient Middle East. An aspect of the relationship between man and water that we Westerners often neglect. The shot sees the relationship between man and the funeral pile as a central element. Once again we find the pastel colors, especially on the yellowish-pink, as if you wanted to remember the dryness of a cold northern desert, giving rise to the desire for water in the observstore. Here we also have the element of fire to underline the concept. Water is the background to the main scene, but it is a fundamental presence in the semantic construction of the story of this shot. The bridge in the background guide the gaze in depth in the image and is also used to balance the composition which has all the weight shifted to the left.

Finally we include the other images in the series as it would go viewed in its entirety to be able to appreciate it. In all these shots we find different aspects of the relationship between man and water represented and perhaps this very varied research has bewitched the judges of the Leica Oskar Barnack Award 2019.

The Yenisei River is one of the longest rivers in the world and was the guideline that Nanna Heitmann followed through Siberia. The photographs speak of the ideas behind his series “Hiding from Baba Yaga”. Here is what Leica Oskar Barnack Award Newcomer 2019 winner said:

My mother is from Russia; but Russia, apart from Moscow, was just a big blank space on the map. So, I decided to do a semester abroad in Tomsk, Siberia. The way I imagined Russia was defined by Soviet children’s films and Slavic fairy tales; they also inspired my story, “Hiding from Baba Yaga”. Baba Yaga is an important figure in Slavic folklore. She is an unpredictable and dangerous witch who lives in a small hut in the middle of the forest. For my project I borrowed a Russian jeep, packed it with camping gear and drove to the Republic of Tuva in southern Siberia. I had some inspired images and places in mind that I wanted to see along the way. I received the support of a friend’s mother, who worked there as a geologist and helped me connect with people and find places. Visually, Russian painters have been a great source of inspiration: Ivan Bilibin, an illustrator of Russian fairy tales; and Mikhail Nesterov, whose symbolic images at the Tretyakov Gallery in Moscow amazed me as a child.

Nanna’s style is a bit different from that of the overall winner. There’s a constant change of focus between the river and nature and the human being with his activities. The intertwining of these two elements leads us to explore one of the most desolate and fascinating areas on the planet. The relationship between human beings and the environment comes out very well from this long reportage and this probably convinced the judges of the Leica Oskar Barnack Award Newcomer 2019. Let’s analyze some shots. 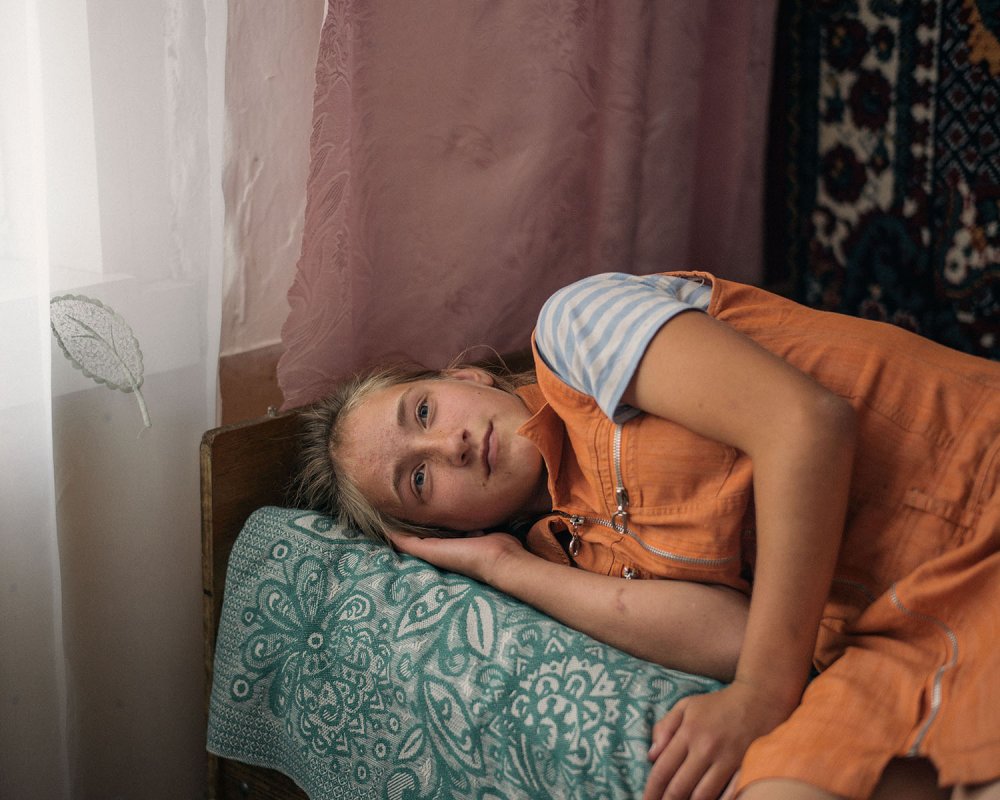 Immediately you can smell the scent of a different style: more direct, less sophisticated, but also more true. The composition is based on the rule of thirds, with the girl dominating the scene both from the point of view of the coverage and from the chromatic point of view. They are also present numerous straight lines which give great stability to the image, the only dynamic element is the main subject with a slight curvilinear hint. Very important it is the face that immediately catches the eye together with the orange of the dress. The girl’s enigmatic expression prompts the observer to investigate the image more deeply to find out more. 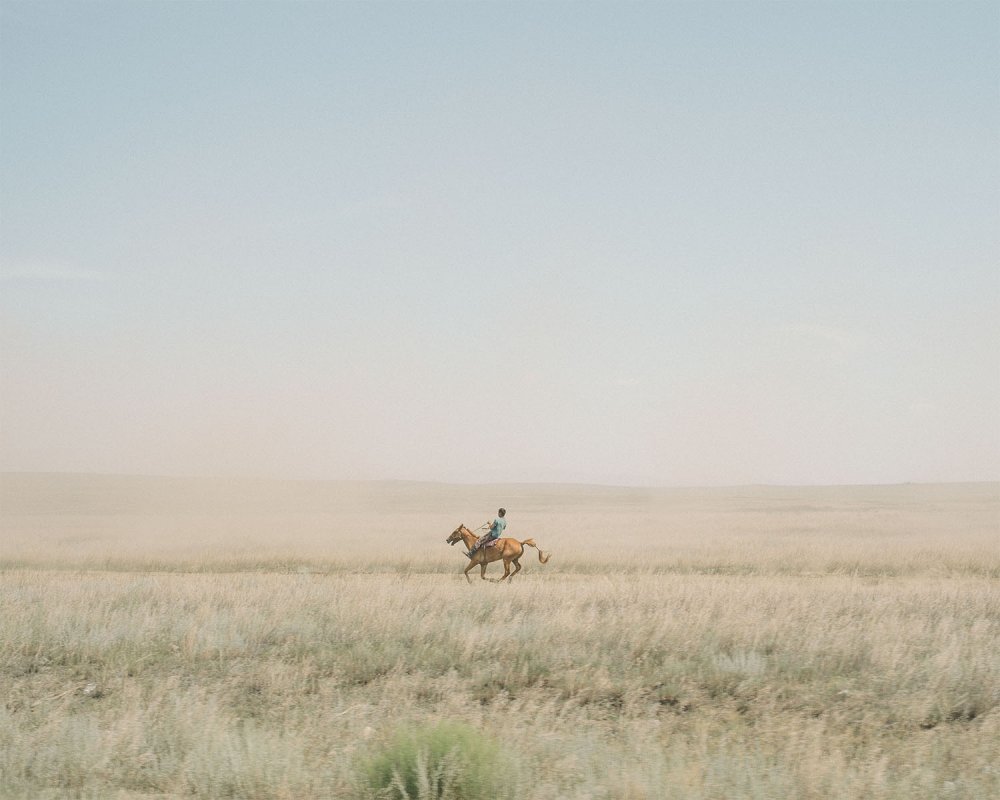 Here too the rule of thirds is applied over the horizon. We totally change our mind though: here the protagonist of the shot is absolutely there desolation of the landscape. The man himself who rides in solitude is only one element used to reinforce the concept; however it plays an important role for give the image a point of dynamic tension. Otherwise the composition would have been very empty. The use of pastel ocher shades returns to accentuate the desolation of the landscape. A simple image, but which with a few elements used artfully manages to have a great impact. 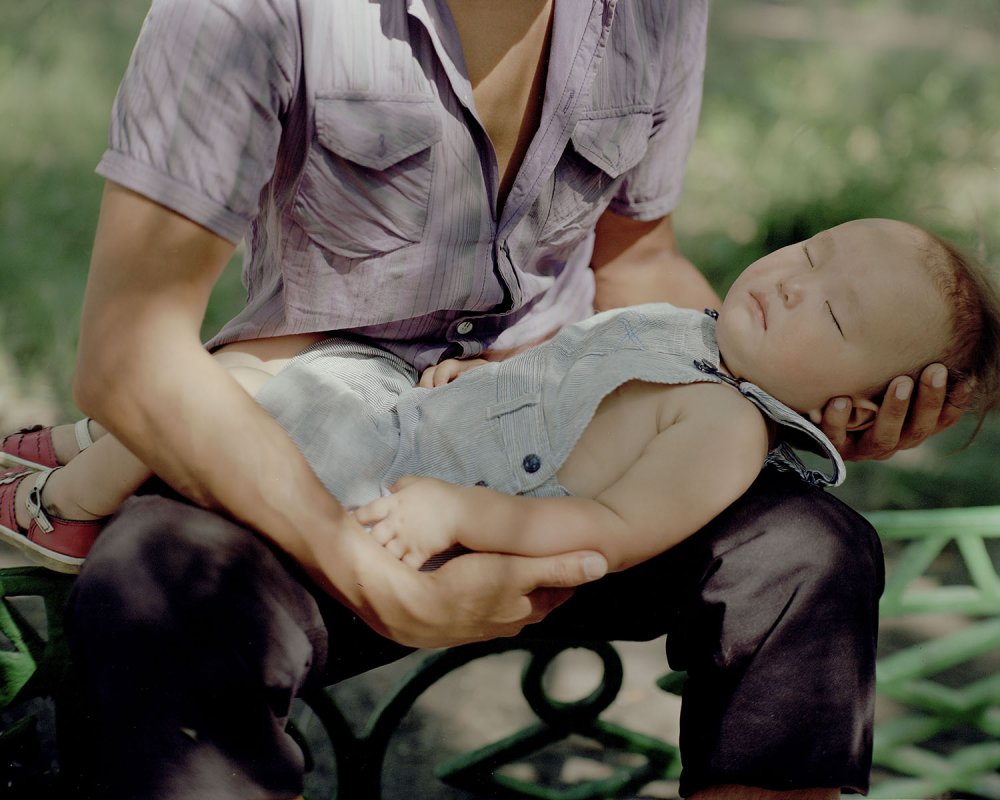 And let’s go back to people. We all remember the first line of any portrait guide categorically prohibits cutting off subjects’ heads. But the rules are meant to be broken. The center of attention here had to be the sleeping child, including the father’s face would have inserted a second point of interest completely changing the message of the photograph, transferring it to the father-son relationship. Here, however, we see that the center of the whole narrative lies in the sleeping child. The father, who wears the same color as the son, almost looks like an extension of the child. The tight cut and the use of blur are essential to isolate what should have been the central subject.

We leave the other shots of the winning series of the Leica Oskar Barnack Award Newcomer 2019 below. One split between nature and man of life along a Siberian river.

The shots of the other finalists are available on the official website of the competition and many they really deserve to be seen. They all tell of great journeys and interesting stories. The Leica Oskar Barnack Awards have always emphasized and rewarded the photographer’s ability to immerse himself in new scenarios and to tell them. From the photography section that’s all! We hope we managed to leave you something with this analysis and continue to follow us for many insights and news from the world of photography!