On the eve of the debut, in 2012, of Mercedes citan, there were many doubts about the success of a city van with the Star. Today, after a 9-year career, Citan has brought great satisfaction to the Stuttgart company, which has always been involved in the world of commercial and work vehicles. And after an excellent sales success, the new, awaited second generation has arrived. Mercedes Citan 2021 is a totally new van, which incorporates the stylistic features and technologies of the cars of the Star, combining them with the practicality and quality of its French brother, Renault Kangoo. Let’s find out everything new, ready?

Mercedes Citan, the first fruit of the Mercedes-Renault alliance

Before getting to know the new Mercedes Citan 2021, it is good to understand the importance of the first generation born in 2012 of the small Van of the Casa della Stella, not new to the world of work vehicles. Although for some it may seem strange or surprising, in fact, Mercedes-Benz has always produced vans, commercial vehicles, tractors and even the legendary Unimog, a multifaceted vehicle capable of traveling on all types of terrain, even on train tracks.

Focusing for a moment on light commercial vehicles, the LCVs, Mercedes-Benz has produced over the years iconic and widespread models. From the middle Vito up to the big one Sprinter, passing through the classics T1, T2 e MB100, vans with the Star have always stood out for reliability, sturdiness and finishes. In the late 1990s, however, the compact size van, with dimensions comparable to those of an average compact but with a lot of practicality and versatility. Despite his experience, however, Mercedes did not attack the market, or rather not with conviction. In fact, in the early 2000s a van version of the Vaneo minivan was born, which however did not convince the public. From that first attempt, Mercedes abandoned the market, focusing only on the larger vans. 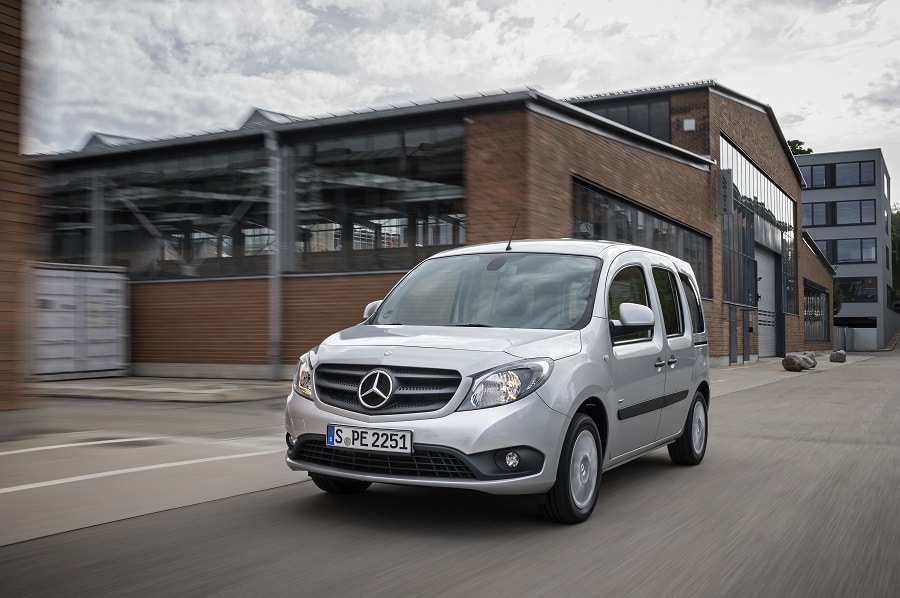 The opportunity to return came, however, in 2012. Right at the beginning of the 1910s, in fact, Mercedes-Benz and the Renault Group have entered into an agreement for the sharing of know-how, platforms and enginesthe. The most famous results of this alliance were precisely the landing of the 1.5 turbodiesel engine on Mercedes A-Class and Class B, or the birth of the “little sisters” Smart ForTwo/ForFour e Renault Twingo. The first fruit of the Daimler-Renault alliance, however, was the Citan, born in October 2012. In every respect, in fact, the new born of the Stuttgart company was a badge engineering del Renault Kangoo. 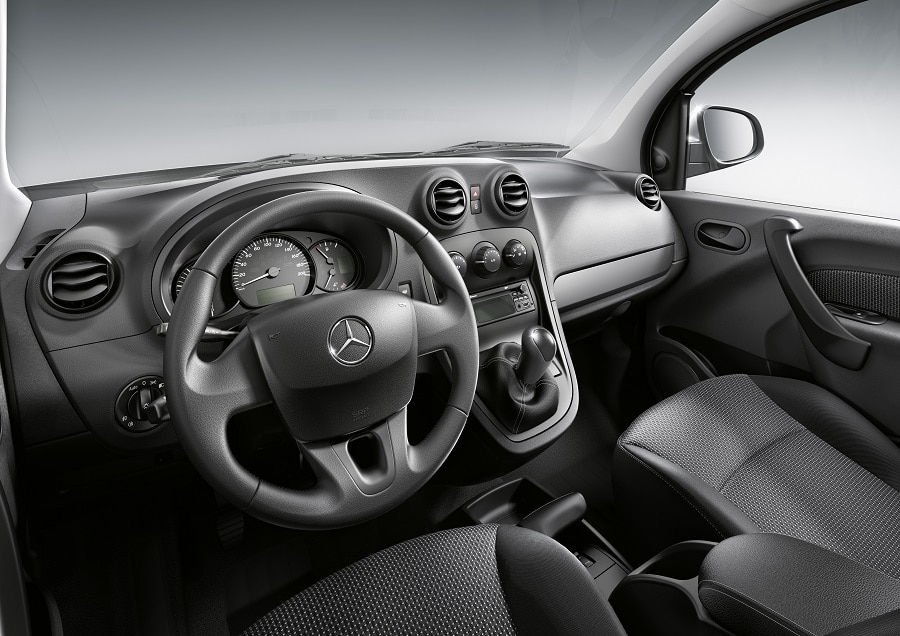 What does it mean? That Renault shared its Kangoo second-series project with Mercedes, which changed slightly the exterior and interior aesthetics and created its first lightweight van, the Citan. And the name? A crasis between City and Titan, to combine its urban vocation with space and its robustness. However, the changes made to the original design by Mercedes were very few. Although in fact spacious, economical and robust and with an aesthetic that despite the clear references to Kangoo made it more personal, Citan was seen by some as a Mercedes version of the 2007 Kangoo. A condition that is not at all different from reality, it must be said. In fact, to enter the market immediately, Mercedes has adapted an already existing project to itself, albeit a very valid one. And despite major changes over the years, today there is a need for a very clear change of course.

From the outside, the Mercedes Citan 2021 is unrecognizable: elegant, well-finished, looks good in the Star line-up

And in fact Mercedes Citan 2021 is a totally different creature than its predecessor. Seen from the outside, the new Citan and the old model are light years apart. The merit is also of the mechanical starting point, that of the new third generation Kangoo, which is already totally different from the previous one, more refined and much more mature. The differences between the two, however, are several. In fact, Mercedes has been keen to point out from the beginning that this new Citan is no longer just a rebranded Kangoo. With the old Citan it has only the presence of two distinct versions: the Van, for the transport of things, and the Tourer, the multi-space version for transporting people. 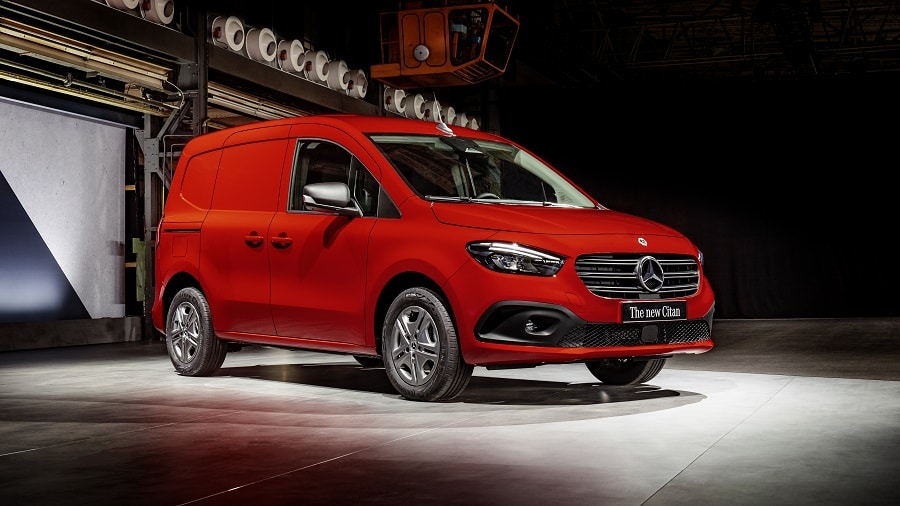 This time, however, Renault and Mercedes worked together from the beginning to be able to create a Van that reflected both the wishes of the German company and those of the French Régie. And this collaboration can be seen immediately from front, which loses that squat look of the previous Citan to get a unquestionably Mercedes glance. The grille with three double blades and the large star in the center is taken from the other vans of the Mercedes family, Vito and Sprinter. 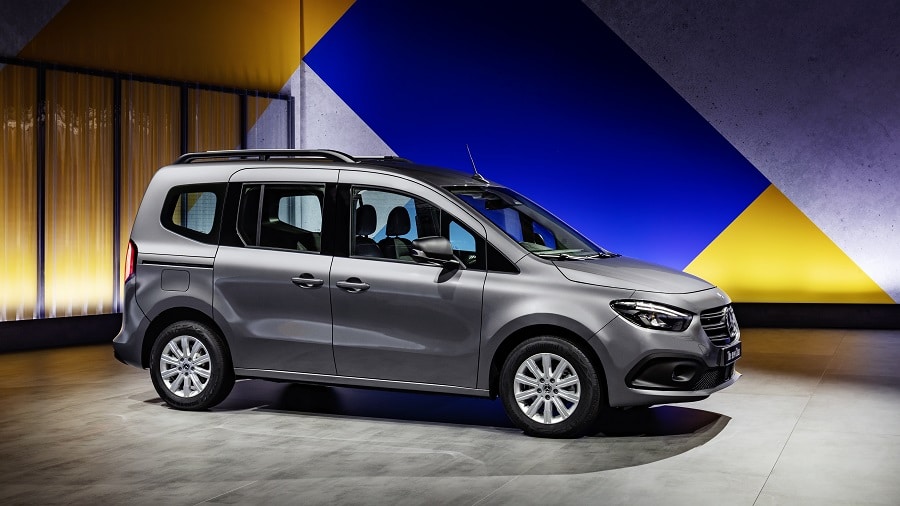 The slim (also available LED) and elongated headlights and lower air intake grilles make the pointed and dynamic front, and make the front overhang less evident. Sideways then both the Citan van and the passenger transport one, the Tourer, offer a view typically from a van, but more refined. The roof is therefore high and square, to maximize cargo space, but the wheel arches are rounded, and the windows are cut upwards at the C-pillar. For continuity, the cut of the sheet metal van also takes up the design of the windows. On the Tourer, then, there is no shortage of very useful ones roof bars. However, it is behind that Mercedes Citan 2021 betrays the kinship with Kangoo, showing off a line quite similar to the French van. In this case, however, it is a real one merit. 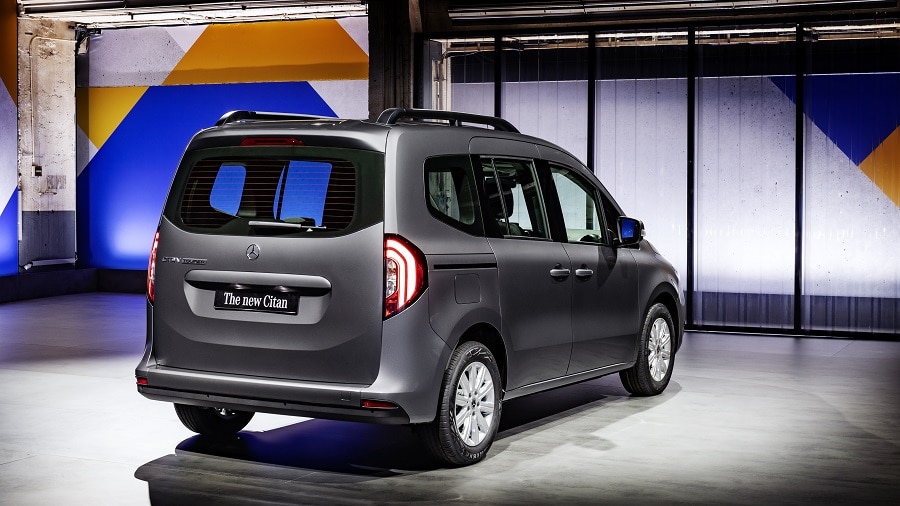 The van Renault in fact led to the debut among the van una rounded waistline, very muscular and automotive. This solution makes Citan more dynamic both in the Tourer version with full tailgate and in the versions with double rear door. Finally, the headlights share the brick line with Kangoo but the LED light signature is different, with three vertical light bands inspired by the V-Class. of the intended use. Basically, Citan comes with iron rims, bumpers and handles in raw plastic, but on request it can be entirely in body color. By the way, there are 8 colors available, 4 metallic and 4 standard.

Inside the Mercedes Citan 2021 is technological and pleasant, with practical and delicious details

If from outside the Mercedes Citan 2021 has changed and is now much more mature and aligned with the cars of the Star, inside has come a revolution. The major criticisms addressed to Citan were aimed precisely at the interior, which differed from those of Kangoo only for the steering wheel with the Star and for little else. Today, however, Mercedes Citan sports a technological interior, well-finished and complete, if you like. 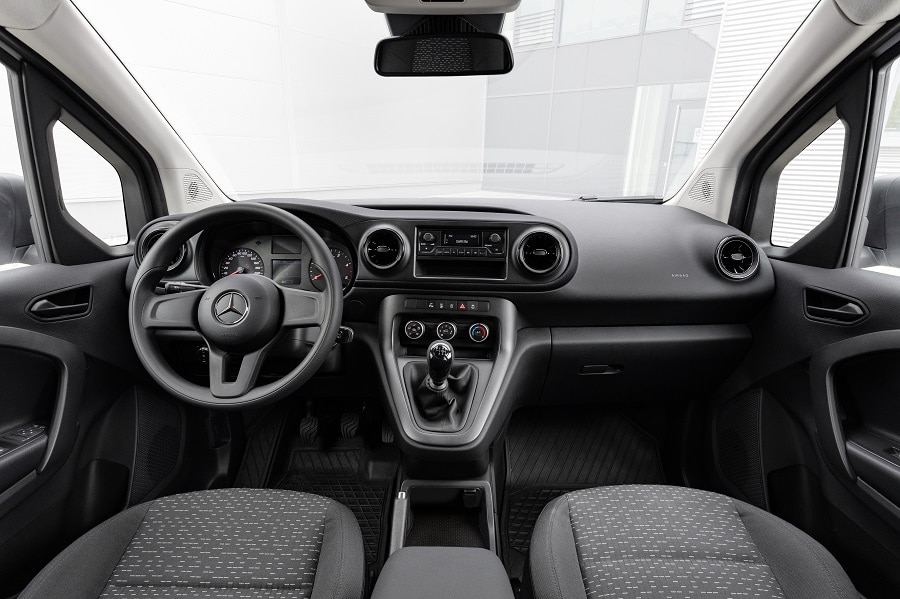 In pure commercial vehicle style, in fact, the basic version of the Citan offers only the essential: CD-MP3 radio, manual climate control, plastic steering wheel and many storage compartments. These versions are the most requested by those who use the van in the workplace, of course. But as we have seen with cousin Kangoo and on rivals VW Caddy, Peugeot Rifter and the like, multispaces are no longer just seen as work vehicles. Today, interior aesthetics, build quality, technology and equipment are also important. 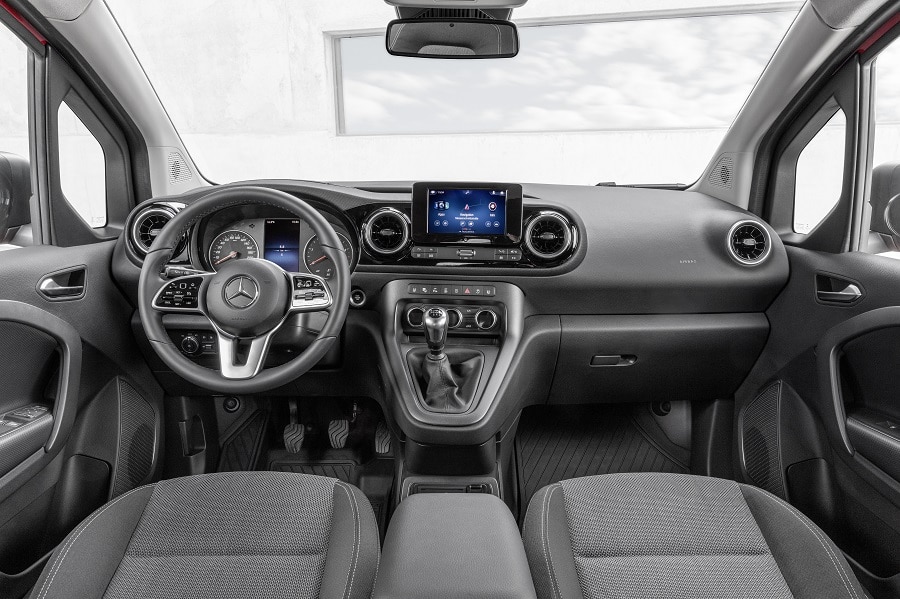 For this, the 2021 version of the Mercedes Citan is much more complete and cared for inside. The steering wheel, to begin with, is the same seen on other Mercedes, with the steering wheel controls (on request) taken directly from the A and B Class, to name a few. The dashboard, then, combines style and practicality and also differs from its French cousin. The instrument cluster is not digital at the moment, but it is the same seen on Mercedes as the previous A-Class, refined and almost sporty. In addition, the dashboard has a very soft and fluid flow, almost as if it were carved out of air or water. In fact, there are no taut or bold lines: everything is relaxing and elegant. Belle then the turbine air vents, taken straight from the A-Class. 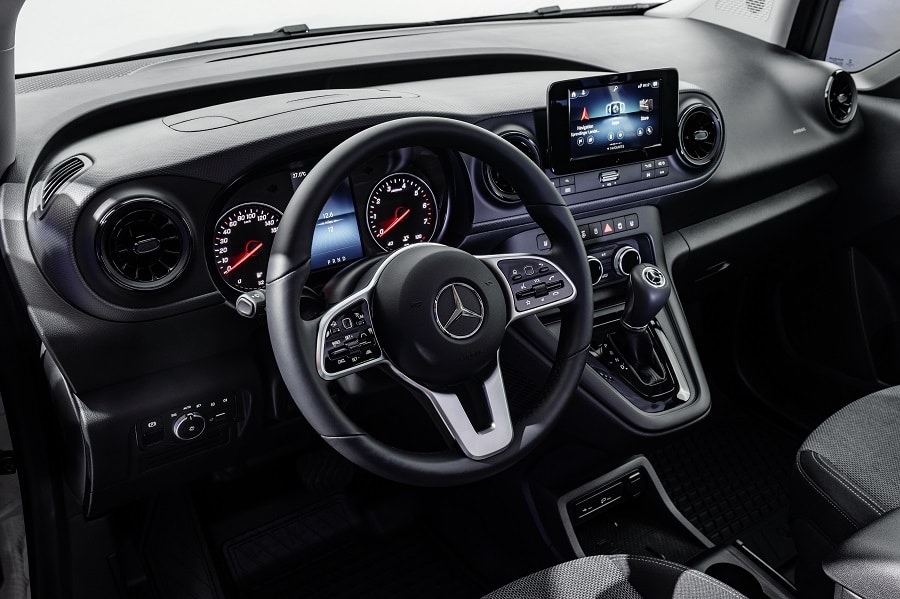 The raised position of the gear lever and the physical climate controls, however, betray the relationship with Renault, as well as the very useful glove compartment located above the instrument panel. In addition to being capacious and equipped with two USB sockets, in fact, this compartment integrates as seen on Kangoo un smartphone holder can be swiveled and mountable both left and right. This support is very comfortable and well made, and allows both right-handed and left-handed users to always have the phone at their favorite hand.

On-board technology and safety: Citan breaks with the past and aims to be the most hi-tech van

The similarities with Kangoo, however, disappear when we arrive at the entertainment system. Aside from the aforementioned 1-DIN radio available for the basic models, in fact, in the most complete set-ups it will be possible to opt for the much appreciated system MBUX. This system, already known to enthusiasts, is one of the best on-board systems around thanks to its speed, intuitiveness and very complete functionality. 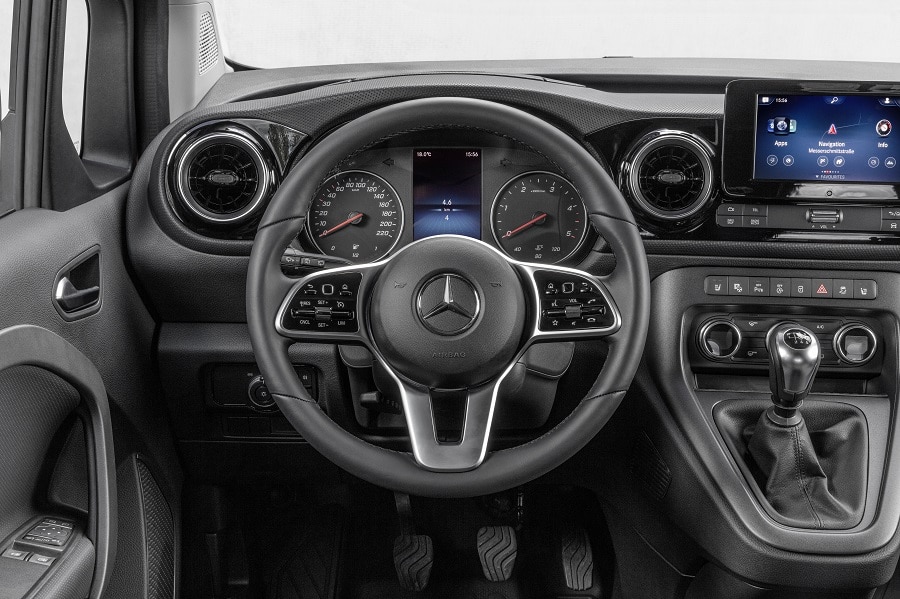 On Citan it may be available with one diagonal starting at 7 inches (and which could grow in the future), and is positioned cantilevered, with a “floating” solution similar to that of the previous generation A-Class. With that old system, however, this MBUX has nothing to do. Equipped with Android Auto and Apple CarPlay, the Mercedes Citan 2021 system is touch screen and is equipped with DAB radio, network connectivity and Vehicle To X communication system to communicate with infrastructures and other cars.

Together with on-board technology, in Mercedes they took great care of the safety issue, to put Citan in the conditions of obtaining the coveted EuroNCAP 5 Stars. Like? Taking advantage of the ADAS technology of traditional Mercedes. As standard in the van version there are 6 airbags, while on the Tourere they increase to 7 with a brand new central airbag. This airbag, once deployed, is placed between the driver and the front passenger, to prevent them from colliding in the event of a side collision. More, now the hill start aid system and cross wind assistance are standard. But it doesn’t stop there. 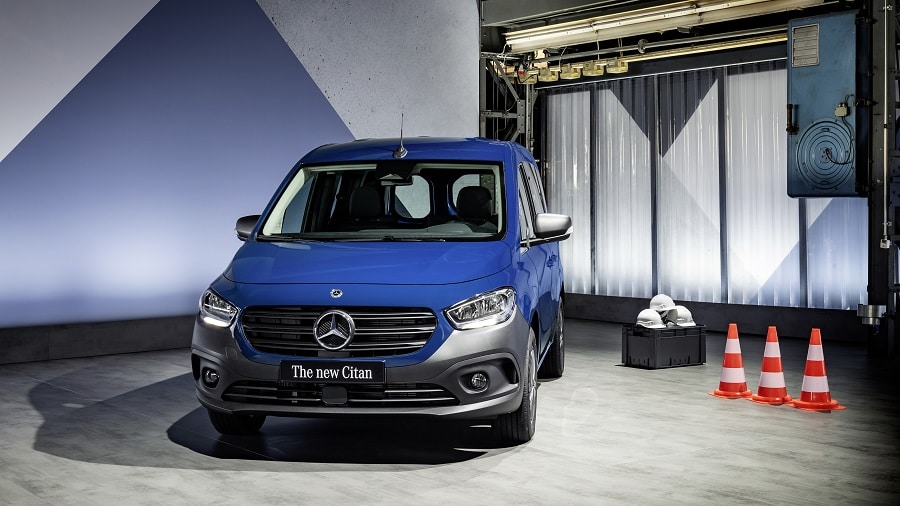 On the Citan, Mercedes has finally also equipped its commercial vehicles with the anti-skid system and lane assistant systems that correct the car by acting on the steering and no longer on the brakes. This solution greatly improves driving comfort on motorway journeys. In addition, we have the system that detects driver fatigue and call …