There is a new queen today in the world of the Star. Mercedes-Benz has indeed presented the most powerful production car in its history, the new Mercedes GT 63 AMG SE Performance. An eternal name that hides an equally enormous power: the new German hyper-sedan is in fact a ‘ibrida plug-in, and comes to deliver up to 843 hp and 1,400 Nm of torque. How did AMG extract all this power? Let’s find out together by seeing all the news of the new more powerful GT 4 Door.

Before throwing ourselves to analyze the incredible technique behind the power of this sedan that makes even the Formula 1s of a few years ago pale, let’s see what are the differences between the new Mercedes GT 63 AMG SE Performance and a “normal” GT 63 AMG S. And the answer is … not many. The differences from the already splendid Mercedes GT 4 Door, or the 4-door version of the Stuttgart Supercar, are really minimal, and visible at first glance only to a very experienced eye.

The general lines are the same as the other GT 4 Door, which speak of one low, very wide and very sleek sedan-coupé, capable of combining the right mix of uncompromising sportiness and true Mercedes elegance. A car that, although powerful and sporty, does nothing to conceal its more than 5 meters in length, which characterize the aesthetics and driving experience of this Super, indeed, Hyper-Sedan. 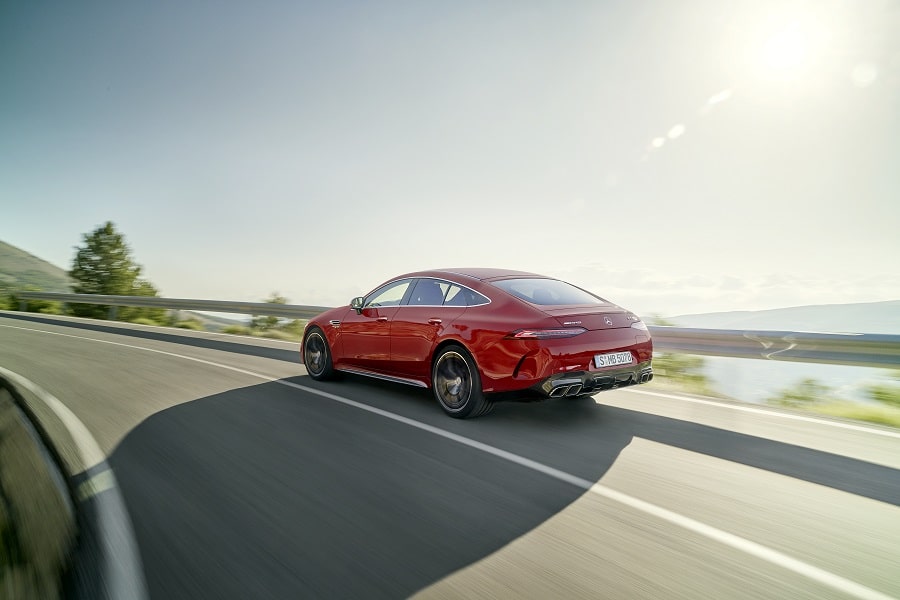 Compared to a “normal” 639 hp GT 63 S, the GT 63 SE Performance sports a front with larger lower air intakes, e vertical battens inside the same air intakes instead of the horizontal ones of the other GT 4 Door. In addition, gods peep out from the side 20-inch wheels at the front and 21 at the rear with a specific design, it’s a badge E PERFORMANCE in red on the firewall, under the classic wording V8 BITURBO. 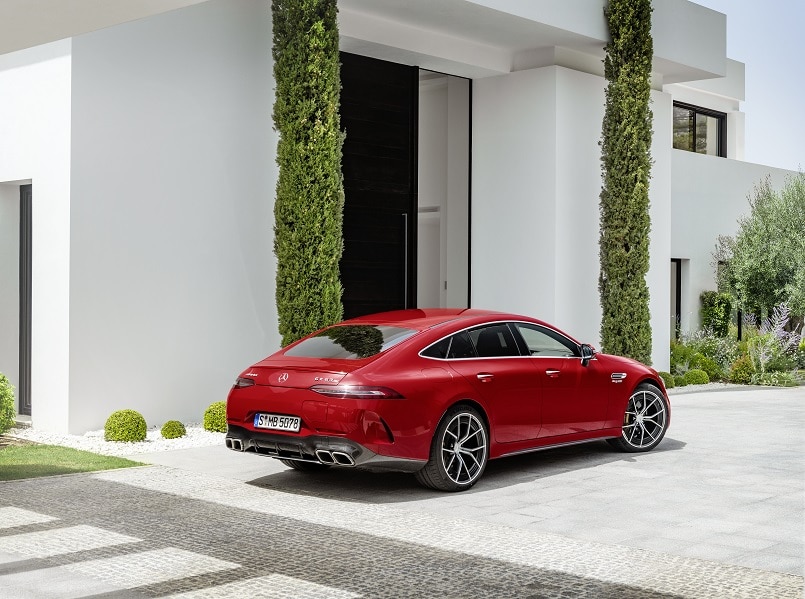 In the queue, it remains unchanged retractable spoiler they trapezoidal drains, while another red E PERFORMANCE badge and one appear door that hides the charging socket of the hybrid system in plain sight under the right headlight. We will talk about why this particular position is short, because there is a lot to analyze.

Therefore, if on an aesthetic level the differences are very subtle, it is the mechanics that are the real star of this new AMG GT 63 SE Performance. This new plug-in hybrid system, the first developed by AMG, has made it possible to obtain powers never seen before with the thermal engine alone. 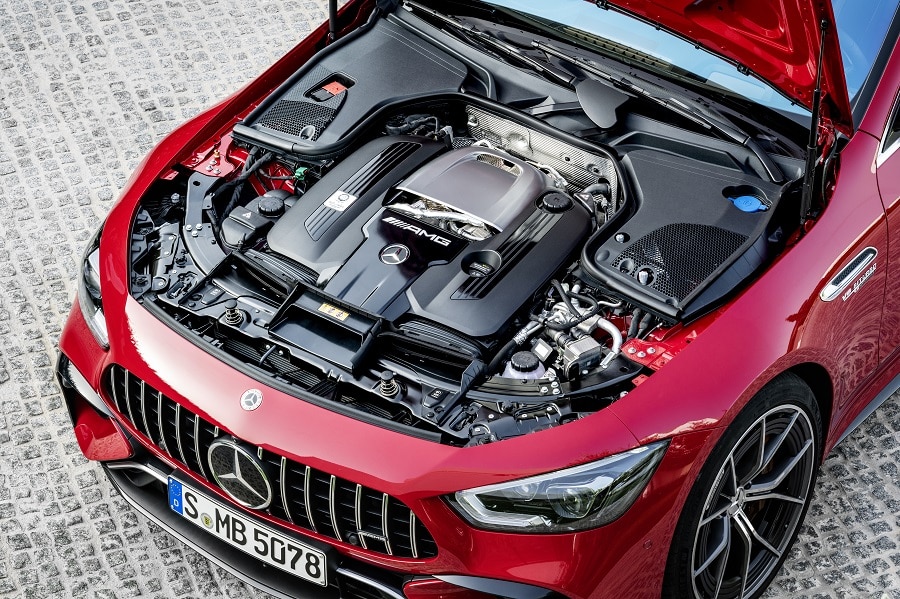 But, despite everything, it is still him, the 4.0 V8 Biturbo, the star of the car. Under the long front bonnet we find the same 8-cylinder as the GT 63 S, and appreciated on many other Mercedes-AMGs. This V8, design code M177, derived from the 2.0 turbo 4 cylinder M133 seen on Class A 45, it is compact and light, thanks also to the solution chosen by Mercedes of insert the two turbos inside the V of the cylinders. This solution, called “hot V”, allows for a compact engine with almost no turbo lag phenomena.

The thermal part is essentially unchanged compared to the normal GT 63 S AMG. So let’s talk about 639 hp and 900 Nm of torque, assisted by 9G-Tronic 9-speed automatic transmission. Traction is the integral 4Matic+, capable of distributing up to 100% of the torque on the front axle, creating a true rear-wheel drive car. 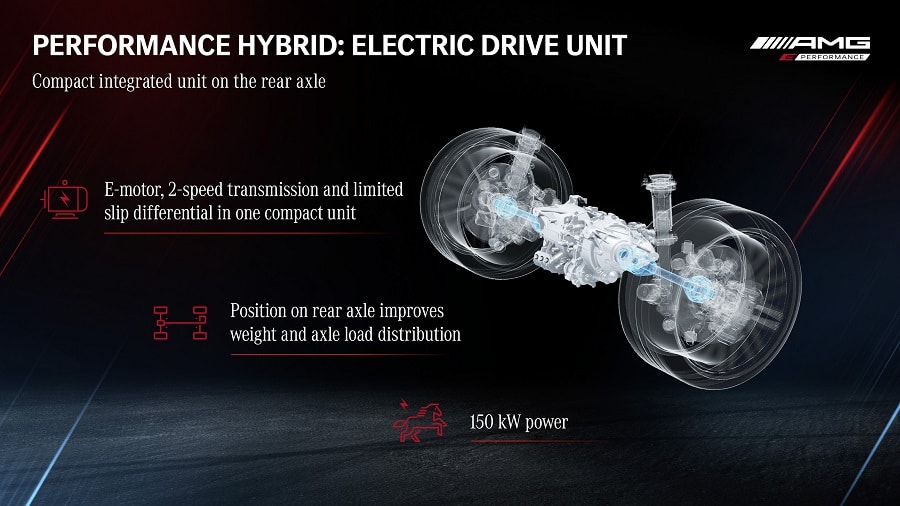 In addition, however, compared to the “normal” GT 63 there is aunprecedented hybrid part. It is not the first hybrid AMG produced, as the Affalterbach company had also dealt with the 53 AMG versions, equipped with only Mild Hybrid engines. Here, however, we do not have a small 20 HP engine that helps the thermal engine, quite the contrary. In fact, at the rear there is a very compact synchronous electric motor capable of powering up to 204 HP. The system is indeed capable of delivering to the car 204 hp for about 10 seconds, or 90 hp continuous boost during the driving. This engine is also equipped with its own two-speed gearbox, and is integrated into the rear axle, together with the electronically controlled self-locking differential.

This compactness is due to the use of technologies derived from Mercedes-AMG’s experience in Formula 1, where since 2014 the Mercedes-Benz has dominated the Championship. Derived from the W12 of Lewis Hamilton and Valtteri Bottas there is also the battery, totally different from those mounted on other Mercedes Plug-in. If in fact on the “quiet” Mercedes hybrids the focus is on offering maximum autonomy with one charge, on the GT 63 SE Performance the focus was on speed performance.

The hybrid system is in fact very light, weighing only 83 kg overall. This result is also thanks to the compactness of the entire system, which starts from position of the charging socket at the rear, a short distance from the battery located under the boot floor. This allows you to save precious unnecessary kilos of heavy high voltage cables, but there’s more. The battery, in fact, is lithium-ion and is quite small, from 6.1 kWh. This choice does not allow the Mercedes GT 63 AMG SE Performance to do so many km in electric, but it is a choice made by focusing on weight saving and speed of charging and discharging. 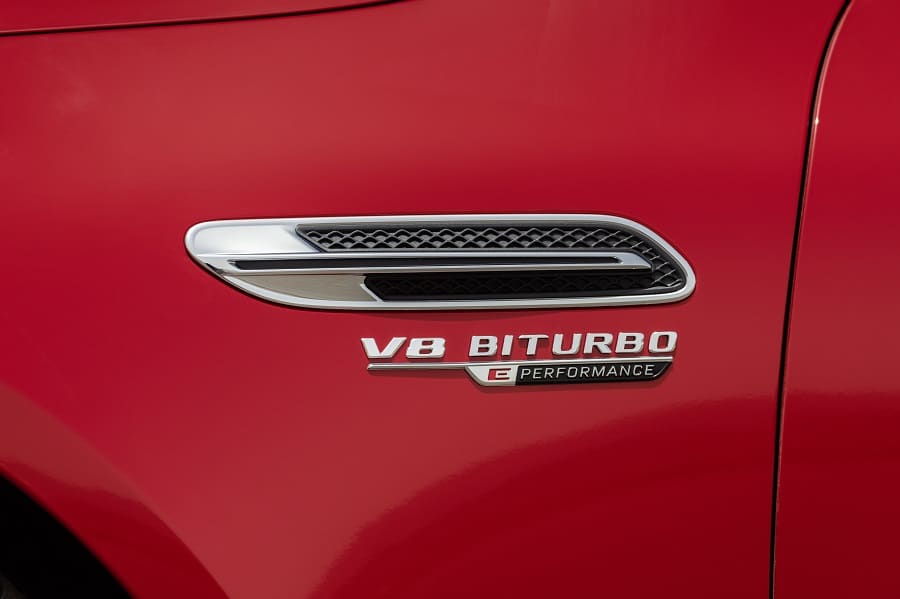 Indeed, as on modern Formula 1 cars, the battery is not designed to store a lot of charge, but to do it quickly. So the 204 HP of the electric motor are available immediately, and recharging during braking or using regeneration on release fills, for the same time, much more than the battery. To obtain this result, then, the battery uses the same chemical composition as those used on the Mercedes Team F1: the density of the battery pack is double compared to other accumulators used by Mercedes. 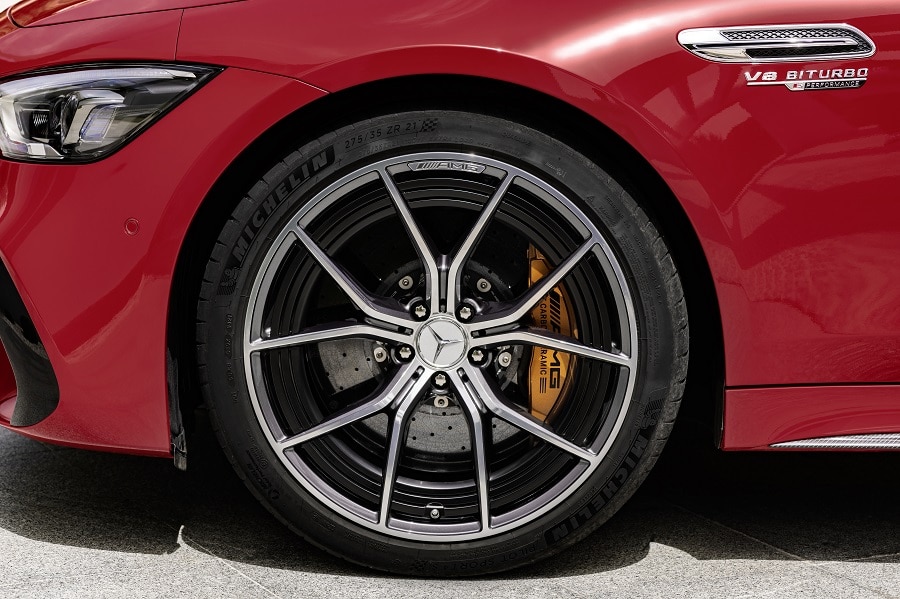 In addition, on GT 63 AMG SE Performance you can choose to set the regeneration leaving the gas pedal on 4 levels. Level 0 allows you to sail by removing the clutch, while Level 3 is able to recover up to 100 kW in release. This allows this automobile to be one of the very few plug-in hybrids that allows you to have a “one pedal” ride, being able to fully slow down to a stop simply by releasing the accelerator. Finally, to compensate for the slight weight gain i carbon ceramic brake discs are larger: 16.5 inches in front and 15 inches in back. Huge.

The performance of Mercedes GT 63 AMG SE Performance: 843 hp, torque from trucks and 0-100 from Hypercar

After knowing all the mechanical innovations of the brand new Mercedes GT 63 SE Performance, the question is only one: it’s complex, but how strong is it? The answer is very simple: a lot. The numbers of the new hybrid system of the German sedan make it to date the most powerful road Mercedes ever. At least waiting for the AMG One, which promises a power of over 1,000 hp, with powertrain derived directly from the Formula 1 V6. 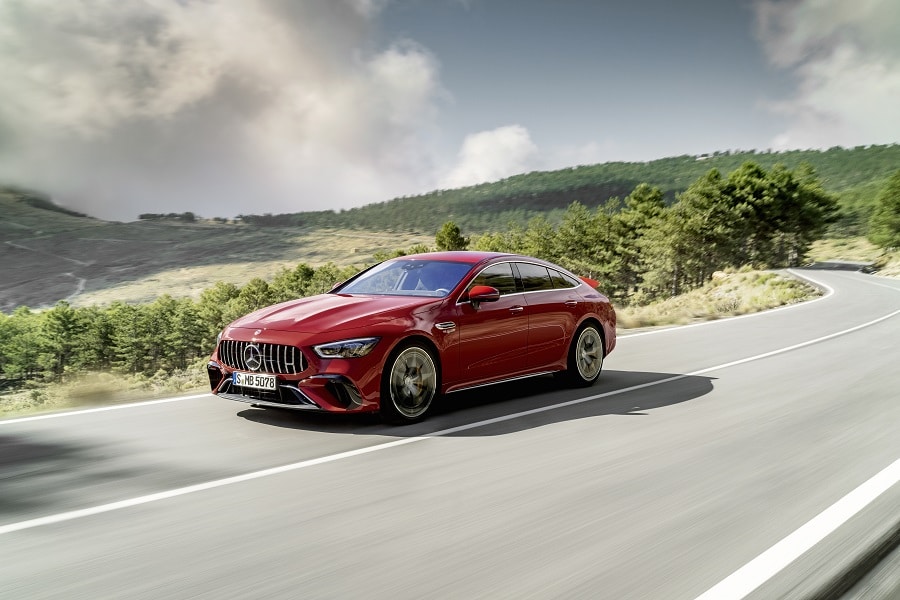 In any case, let’s go back to talking about today’s protagonist, who will be for a while the Queen of all high-performance Mercedes. Combined together, in fact, the 4.0 V8 and the rear electric motor deliver well together 843 CV, with a maximum torque of 1,400 Nm. With an efficient all-wheel drive like the 4Matic + and the presence of two gearboxes, one for the internal combustion engine and one for the electric one, the 0-100 km / h acceleration is truly impressive. 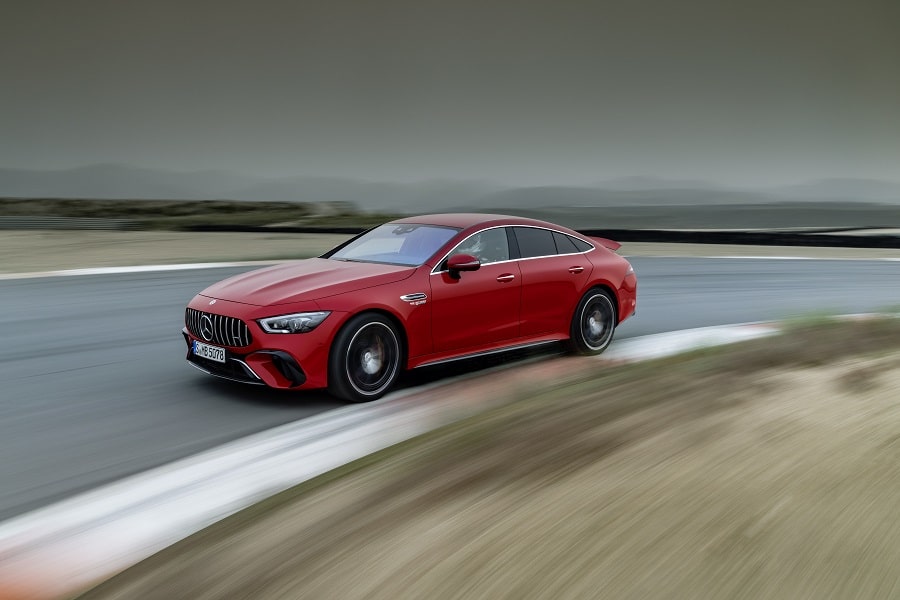 In fact, Mercedes declares that its new GT E Performance is capable of cover 0-100 acceleration in just 2.9 seconds. To be clear, it is a long time identical to the McLaren 720S tested by Fjona a few weeks ago. All with 4 comfortable seats, a large trunk and lots and lots of luxury. Surprisingly, then, the Mercedes GT 63 AMG E Performance has no limiter, and pushes up to 316 km / h. Numbers that make it a real HyperCar, as well as the second fastest 4-door in the world, second only to the 333 km / h Bentley Flying Spur W12. 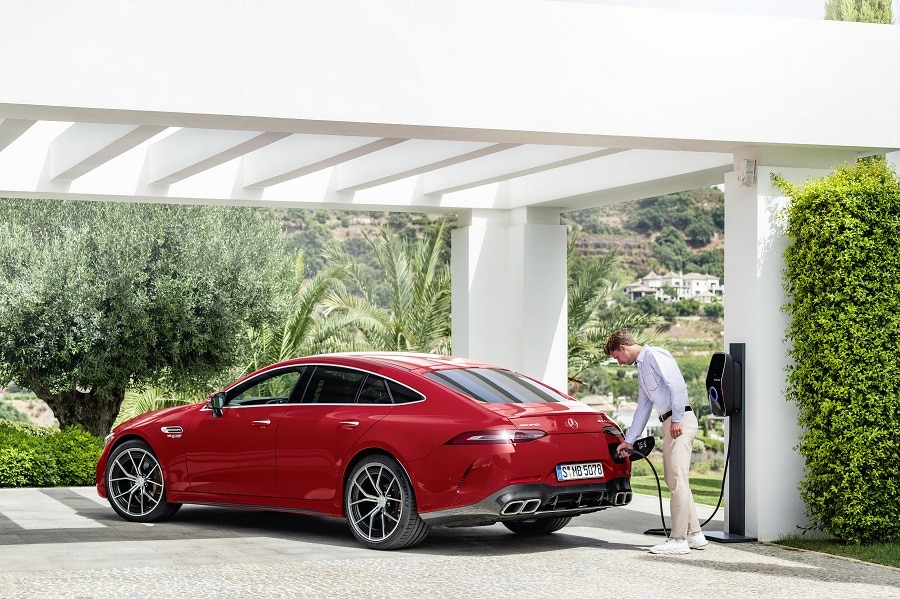 And if you are intrigued by the range promised by the small battery of 6.1 kWh, know that it allows you to travel up to 12 km in fully electric mode. The maximum zero-emission speed is 120 km / h, while the maximum charging power is 3.7 kWh. In addition, for those interested, the two-speed transmission of the electric motor changes ratio at around 140 km / h, when the electric motor runs at over 13,500 rpm.

Interior and equipment are the same as the traditional GT 63 S, only with more red and carbon details

Finally, let’s see what the differences between the classic Mercedes GT 63 AMG S and this E Performance inside. The answer is really simple: it changes little or nothing. The biggest difference is the presence, as standard, of one carbon fiber molding glossy on the entire dashboard. This is then embellished with a red band, the dominant color on this E Performance. But as always in the Mercedes world, the entire interior is fully customizable. 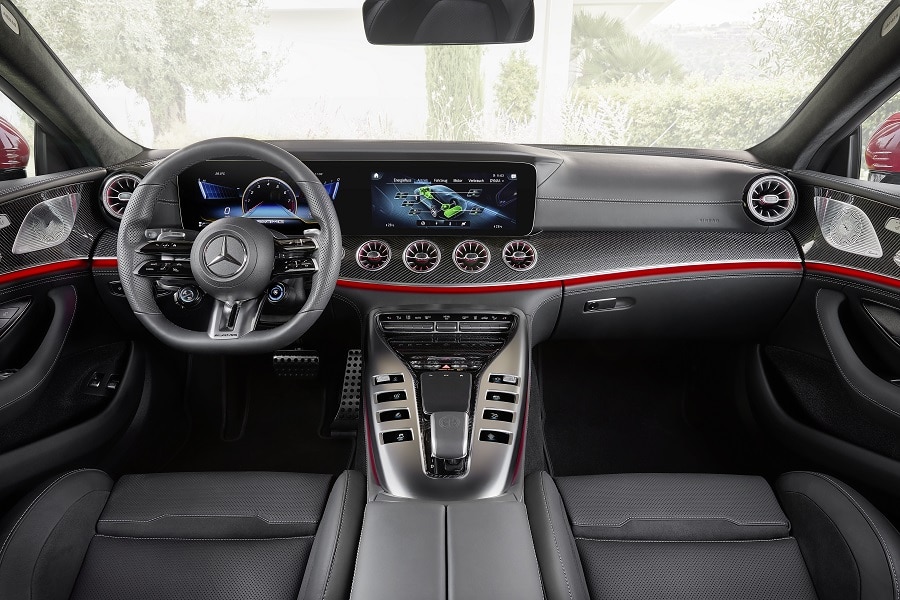 In addition, through the manettino located on the steering wheel that allows you to select the driving modes with a touch, thebrand new EL mode, for electric driving. Finally, infotainment MBUX, unchanged in screen size and performance, allows you to consult a page dedicated to the analysis of the plug-in hybrid system. For the rest, the interior of the GT 4 Door E Performance remains as elegant, neat and well done as on the other GT 4 Doors.

How much does the Mercedes GT 63 AMG SE Performance cost? And when will it hit the market?

We have told you everything about the new Mercedes GT 63 AMG SE Performance 4 Door. From its incredibly long name to its incredibly powerful powertrain, this sedan is a car of excess. Its 843 hp will certainly be much more than necessary, but having the same performance as a real Hypercar on a representative sedan is simply incredible. Attention then to the real 0-100: the normal GT 63 S, in fact, is able to burn 0-100 in just 2.6 seconds. Who knows where this E Performance can go …

We just have to find out its price, and when it will arrive on roads around the world. Unfortunately, this information is still unknown at the moment. The car will indeed be officially presented at the IAA in Munich, which will start on Tuesday 7 September. The price, then, is still totally obscure. But if the …

Person: a clue from Atlus points towards the sixth chapter

Tales of Arise: how to remove gear and costumes

Elgato Stream Deck 5.0: all the news of the new version