Let’s get the uncomfortable news away: the car we’re talking about today, Nissan Z, will not officially arrive in Europe. So why are we telling you? Despite this news, the Japanese coupe is really interesting and awaited by all sports car enthusiasts. 405hp twin-turbo V6 engine, rear wheel drive, manual gearbox and one clean and retro line which refers to the legendary 240Z. The price? In America it should be around 40 thousand dollarsi: but let’s discover everything calmly. Are you ready? Let’s fly to Tokyo!

Nissan Z, the latest descendant of the “Fairladys”.

For those who are not used to Japanese sports and do not know what it is Nissan “Z series”, it is only right to take a very short step back. Despite the fact that the Japanese company is famous in Europe for its pragmatic and quiet cars, such as the Micra and Qashqai, over the years Nissan has three distinct series of sports cars. At the top there is the serie GT-R, born as the Skyline GT-R and has come down to the present day: uncompromising sportiness and power, for performances that scare European supercars. At the base there was instead Serie S, which officially arrived in Europe only in the 90s with the 200SX, and known throughout the world as the family Silvia.

In between, then, there are the “Z-Cars”, the Z car. The “Zs” are sports cars that combine usability and driving pleasure without compromise, with strictly six-cylinder engines, driving dynamics at the top and a relatively affordable price. In the world they are also known as “Fairlady“, From the name that these models have always had on the Japanese market, Fairlady Z. The progenitor of this series was the legendary Nissan 240Z, also known as Nissan’s “entry” brand, Datsun. 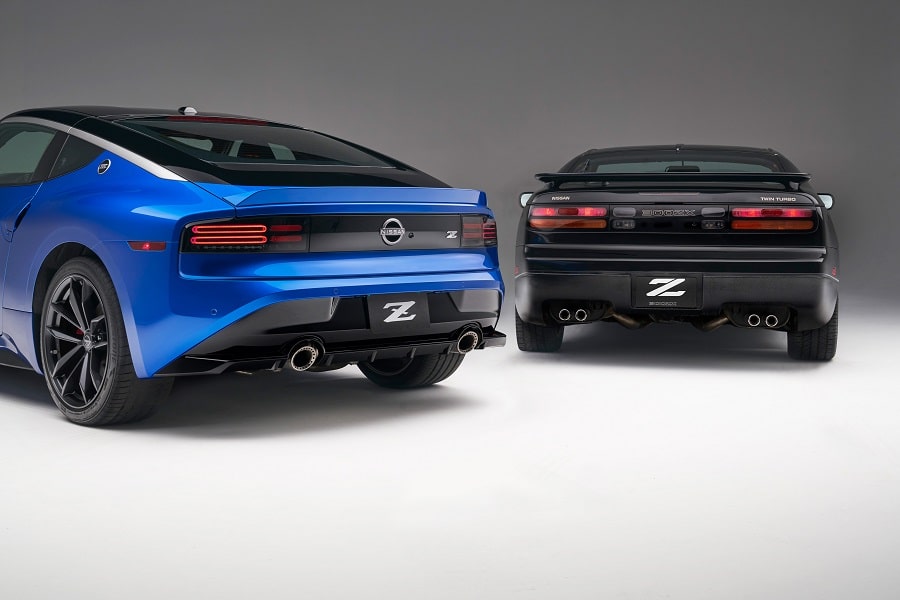 Sporty without frills, with its graceful and elegant line and its 2.4 six-cylinder in-line under the bonnet gave birth to the 1969 the myth of Z cars. After the 280HP, the 300ZX e the recent ones 350Z e 370Z, with the latter present on the market for over 13 years, the Z-Cars now seemed to have come to an end. Last year, however, the turning point: in 2022 the new Z arrives, and we finally got to see it in its final form. Its name is unmistakable: Nissan Z, the latest addition to Z-Cars.

Elegant and retro, from the outside the Nissan Z refers to the legendary 240Z and challenges the “baroque” Supra

After the refined and original 370Z, many expected from the new Nissan Z a very aggressive and tormented style, as is now traditional for Japanese sports cars. Instead, the new Nissan Z also surprises in this respect, almost perfectly following the lines seen on last year’s Nissan Z Proto. From the outside, therefore, Nissan Z is perhaps one of the most beautiful and elegant Japanese sports cars of recent years, inspired by the splendid 240Z of 1969. 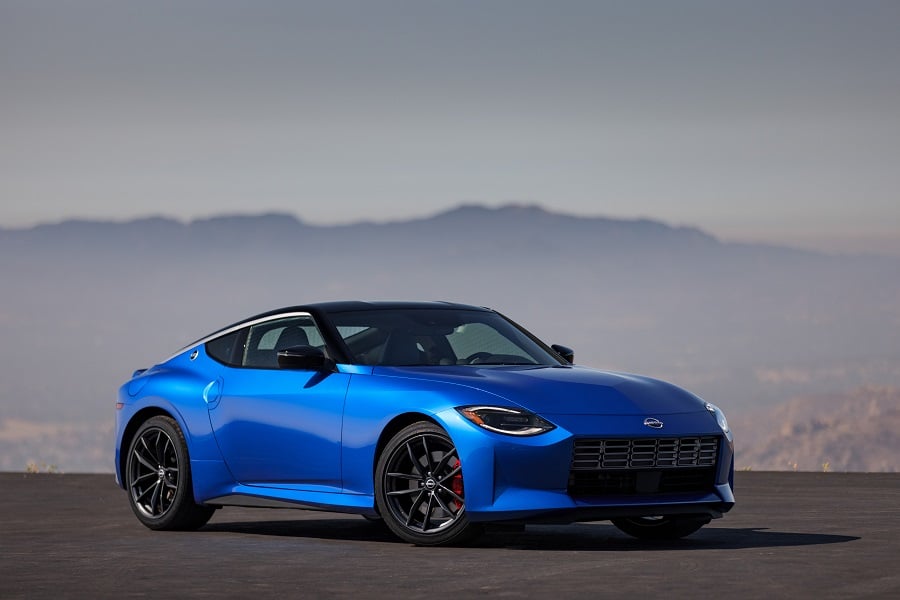 Starting from the front, in fact, the references to the 240Z are unequivocal. THE to do, circular and obviously made with LEDs, almost perfectly reproduce the optical group of the original Z. Even the grille, squared and in a raised position with respect to the lower part of the front bumper, is a clear reference to that of the 240Z. The long and very low bonnet and the compact and set back passenger compartment complete a truly successful front and side look. 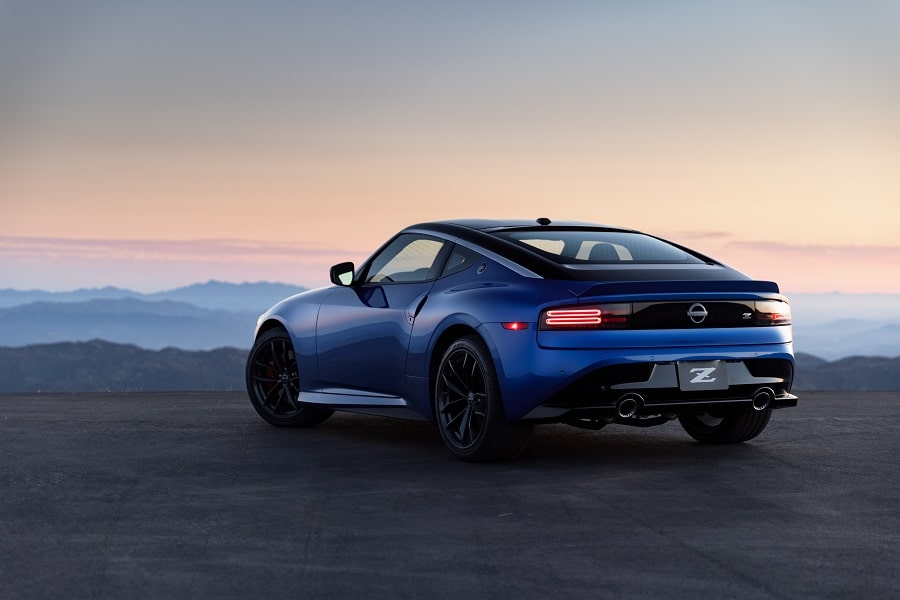 The rear instead refers to both 240Z but also to other Nissan Z of the past. The C-pillar is very similar to that of 280ZX, while the horizontal pattern of the lights, the verticality of the tail and the LED headlights set in a black panel clearly refer to the Nissan 300ZX from the 90s, one of the most popular Z-Cars. Overall, the new Nissan Z is much more European and linear than many of its predecessors. They are then the differences with its main rival, the new Toyota Supra, are very marked, who instead chose a decidedly more Japanese style, more baroque and tormented but equally impactful. And what do you think of it? What’s your favorite? Let us know in the comments!

On a mechanical level, however, Nissan Z scores another point in the challenge against Supra. Unlike Toyota, in fact, which was created in collaboration with BMW, the new Z is a Nissan in all respects, starting with the platform. The mechanical base is in fact an evolution of that of the outgoing 370Z, which from the point of view of the chassis has always been very popular. 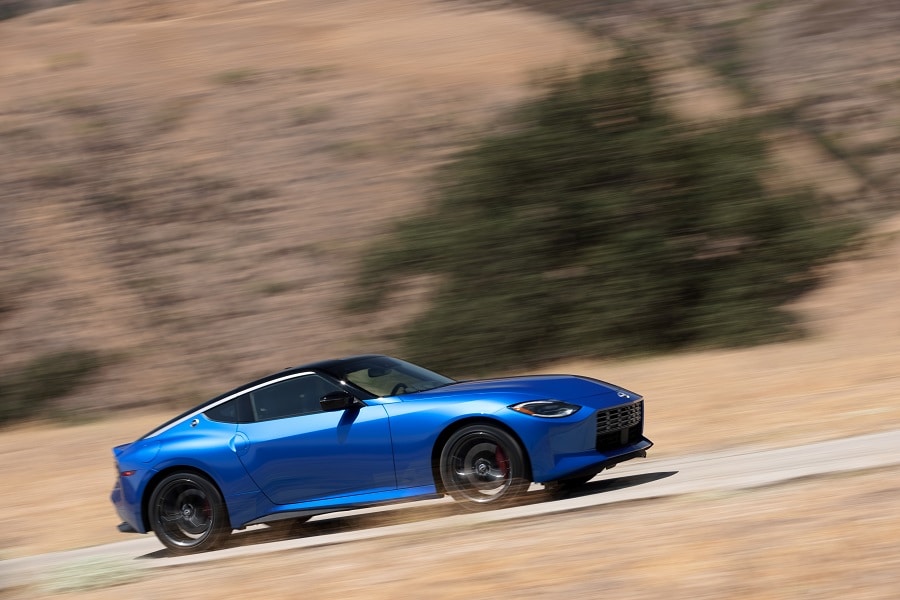 The pitch is in fact unchanged at 2.55 m, while the length increases from 4.25 to 4.35 meters. The mechanical layout obviously remained the same, with front engine far back, almost central position, and exclusively rear-wheel drive. the suspensions are double wishbone at the front and multilink with 5 levers at the rear, like on the 370Z, but there were several improvements. The suspension has been revised in geometry, with the front ones that now have a greater caster angle, to improve stability on the straight.

The frame itself is now more rigid, and lateral acceleration has now improved by 13% also thanks to wider and more performing tires. The steering is now equipped with electric power assistance, which at Nissan ensure that it has a “nice mechanical feel”, while the brakes are larger than the 370Z and ventilated on all four corners. But I know that you are all waiting to learn more about the motor of Nissan Z, which represents a return to the past. After the aspirated 350Z and 370Z, the new Nissan Z picks up on the tradition interrupted with the 300ZX and sports a powerful twin-turbo V6. 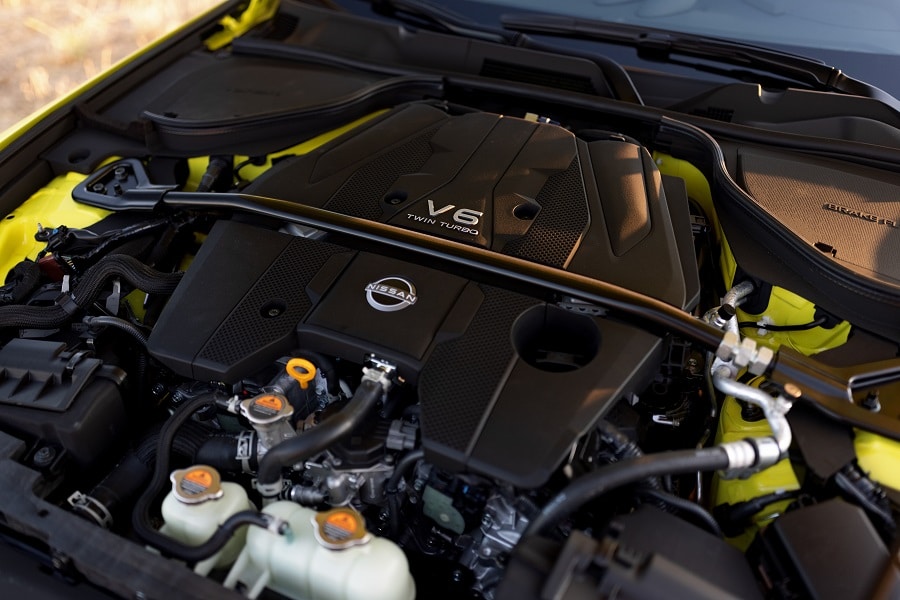 This 3.0 liter (code name VR30DDTT) is derived from the Infiniti Q60 Coupé, and welcomes two small turbos to maximize response to throttle inputs and reduce turbo lag. The power grows from the 326 of the “normal” 370Z to well 405 CV a 6.400 giri, while the couple comes to 475 Nm and it’s present constantly from only 1,600 rpm up to 5,600. These features combined with the red line placed at 6,800 rpm they suggest a V6 that has a lot of torque at the bottom, but which also appreciates revving up, and capable of excellent performance. We have no official data, but Nissan stated that 0-100km / h was reduced by 15%. From the 5 seconds of the 370Z, then, it should go down to just 4.5 seconds with a manual gearbox. 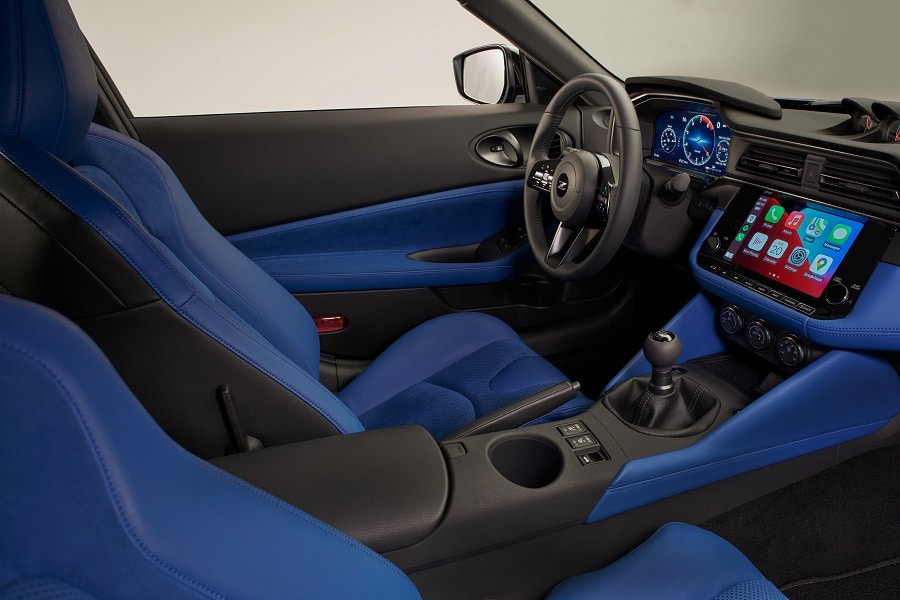 Yes, you heard right: manual transmission. The new Nissan Z does not give up a nice old school manual gearbox, a 6 gears with short shifts and a high performance clutch of Exedy. The system will also be available on request and on the Performance version automatic shotgun, brought to its debut by 370Z in 2008 and which also returns on the new Z. For those who do not wish to work too much on the left foot, however, a classic 9-speed automatic transmission will also be available. This automatic will come standard with Launch Control, eland its paddles behind the wheel will be the same as the GT-R supercar. Finally, all versions of the Nissan Z will be equipped with a carbon fiber drive shaft.

It’s inside? Two seats but a lot of space, and a good dose of technology

Before talking about the two available set-ups, which will lead to great differences on the dynamic profile, let’s dedicate a couple of words about interior of the new Nissan Z. The criticism raised the most to the old 370Z was precisely the interior that remained “stuck” in 2009, which now attracted very few customers. Nissan knew very well that it had to revolutionize the interior, and the result looks great, from what we can see in the photos. 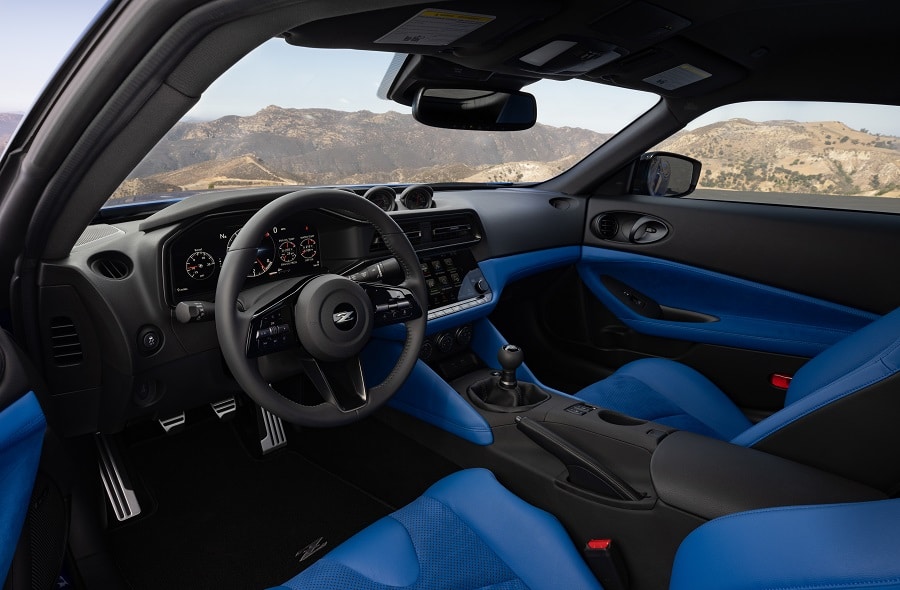 From the previous Z, however, it inherits the general approach, with the voluminous central tunnel which houses the short shift lever and the mechanical handbrake. More, the three additional instruments on the top of the dashboard also remain, present on the Z since the 240Z of 1969. What do these three instruments indicate? The boost of the two turbos, the turbine speed and the voltmeter. The rest, however, has been heavily modified, starting from infotainment system. In fact, the interior dominates new infotelematics system with 8 or 9 inch screen depending on the chosen setting, the same seen (and appreciated) on Qashqai. If you want to know how it goes and get to know the Japanese SUV better, at the bottom of the page you will find our road test of the new Qashqai. 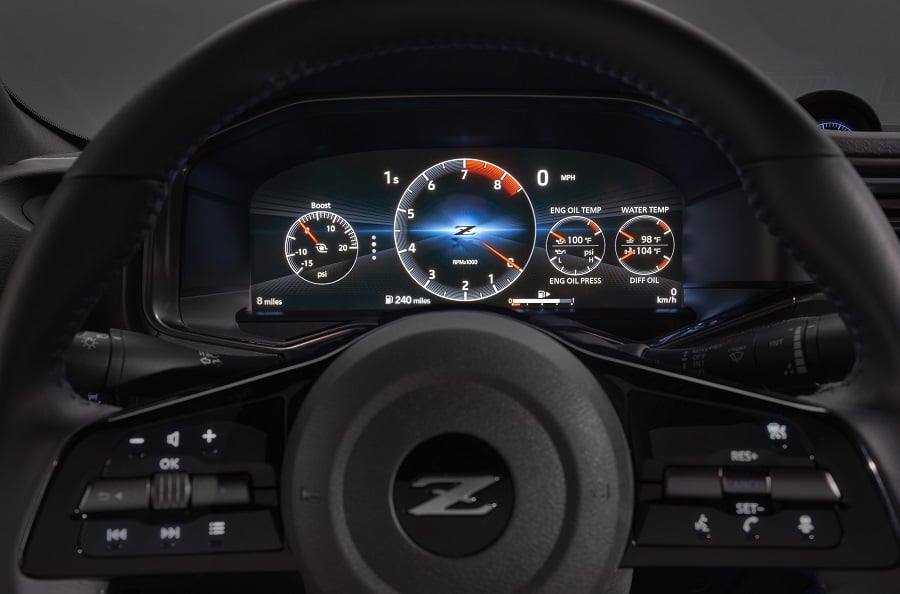 The steering wheel has also been revolutionized, with a new design, new controls and the inevitable Z in the center. And behind him now there is one 12.3-inch screen for the digital instrument cluster. This is configurable in three positions, with the Normal and the Sport featuring the tachometer, made as an analog instrument. Nissan has also decided to place the red line at 12 o’clock, to make legibility while driving excitedly even easier. 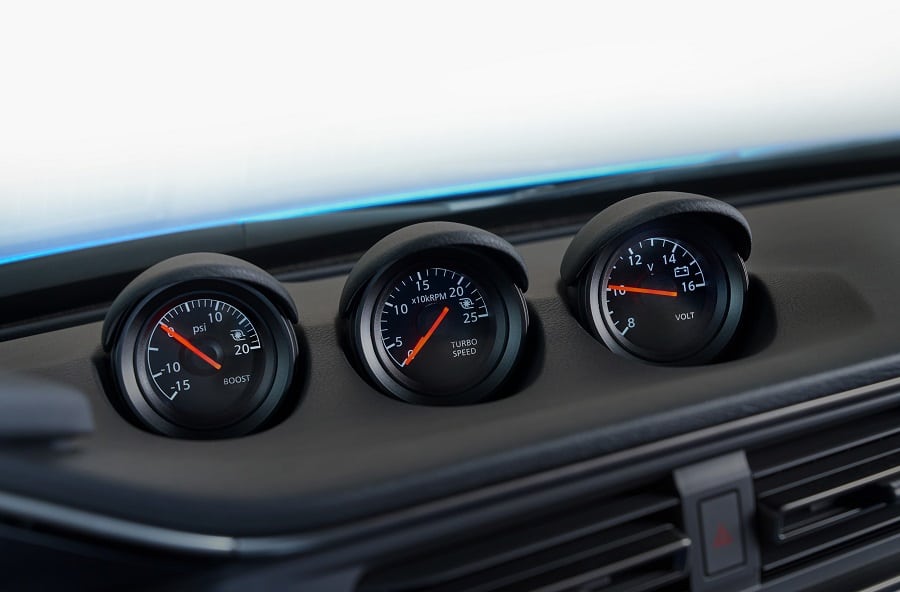 The seats are then derived from those of the GT-R, and despite the 2-seater configuration the availability of space on the card is generous even for the tallest. The boot space should also be increased from the already respectable 235 liters of the previous 370Z. In the end, Nissan Z offers a host of technological and safety features as standard. In terms of on-board technology, Nissan Z offers automatic climate control, a reversing camera, two 12 V sockets and two USB sockets (one Type A and one Type C) and the 8-inch screen with Android Auto and Apple CarPlay. On the side safety, all Z will be equipped with Adaptive Cruise Control, automatic emergency braking, sensors for the blind spot and for involuntary lane invasion and all the most common systems FENNEL, which guarantee you one level 2 autonomous driving.

Nissan Z will have two versions: the “base” Sport and the Performance, with double automatic and LSD

So let’s close with the versions that will be available to the public. Nissan Z will in fact be offered with two trim levels, Sport and Performance. The “base” Sport already has everything that can be used in everyday life, as we have just seen. This set-up is equipped with 18-inch wheels, manual fabric seats, all the technological and safety systems mentioned earlier and the 8-inch infotainment screen. In addition, from a mechanical point of view the Sport is equipped with gomme Yokohama Advan Sport, but it lacks both the Rev-Matching function and the Launch Control if equipped with a manual gearbox, and at the rear we find a open differential. 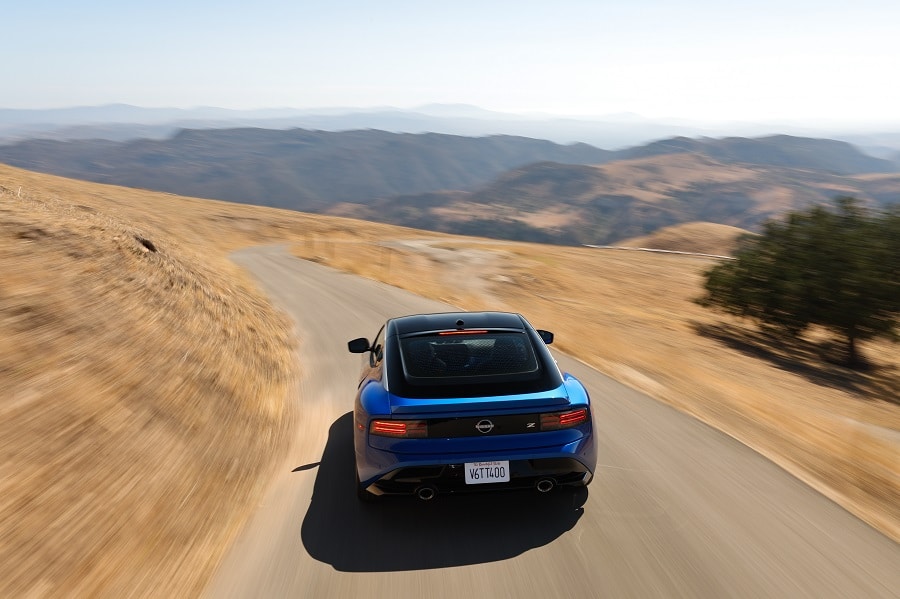 If the Sport is therefore the perfect Nissan Z to drive every day, if you are looking for sports emotions and equipment …