The one between Veronica Mars and Logan Echolls is one of the most tormented “serial” loves ever. Let’s relive it with the top ten of the most intense moments that saw them as protagonists

New appointment with the column dedicated to the most beautiful couples of seriality: this time it is the turn of Veronica e Logan of Veronica Mars.

The best moments of Veronica and Logan in Veronica Mars

When Logan’s mother dies under suspicious circumstances, Logan, who believes she only faked her death, asks Veronica to investigate to find out what really happened. In “The Russian Bride” the truth finally comes out: it was the stepsister Trina who used Lynn Echolls’ credit card, who had actually committed suicide. At that point Logan collapses and Veronica stays by his side, comforting him with a tender hug and taking care of him.

2. Our story is epic

One of the most memorable moments of the entire series is the one in which Logan defines the story with the epic Veronica: “It lasts for years, conquering continents, ruined lives, massacres… epic“.

Although at that moment they are not together, Logan’s words confirm what, in reality, we already knew: he never stopped believing in their love.

In the eighteenth episode of the first season, Veronica is taken hostage by a man who threatens to have hidden a bomb in the school. The bomb scare turns out to be a lie, but Logan rushes to the scene to save the girl. To thank him, the girl kisses him straight away. He reciprocates with an intense and passionate kiss.

In the Season 2 finale, Veronica learns the truth about Cassidy and decides to confront him. In a fight, Veronica manages to disarm him and, with a gun in her hand, she almost lets herself go to the idea of ​​doing herself justice. Luckily Logan arrives, protects her and reminds her that she is not a killer, making her desist from killing Cassidy.

During the Sadie Hawkins dance, Logan is forced to endure Gia’s constant whirlwind. Veronica “saves” him from the situation and invites him to dance. Tight, Logan and Veronica dance all night. In their embrace, in the unspoken there is all the love in the world.

In the first episodes of the second season, Veronica and Logan are a steady couple. During a moment of intimacy, he confesses to her for the first time that he loves her. Veronica, with her typical and cutting irony, replies with a “Things that are said before moving on to the second phase”.

It’s Veronica and Logan’s wedding day, and the latter’s delay seems to portend that Logan has changed his mind. But when Logan catches up with his beloved, the wedding is the most moving ever. It’s just a pity that tragedy is just around the corner.

8. The message on the answering machine

After Logan’s death, Veronica visits the boy’s therapist, who plays her a message on her answering machine about her:

I want to marry Veronica because she is the strongest human being I’ve ever met. From all that destroy most people, she always gets up.

9. In the school bathroom

Veronica and Logan have just started dating and one of the hottest and most sensual moments of their relationship is undoubtedly the one in which the two share a lot of kisses in the school bathroom. Their story is still in its infancy, but the desire and passion are already there.

Although Logan and Veronica have decided to keep their relationship a secret, their intentions go sour when they are caught kissing by a surprise “birthday” party organized for Logan. When Dick addresses the girl in a rude way, Logan immediately takes his defense: “Anyone who has a problem with Veronica is dead to me.”

The story between Veronica and Logan hasn’t always been perfect, sometimes experiencing it as spectators was like riding a roller coaster, but, through ups and downs, it undoubtedly gave us a myriad of emotions. Although the happy moments have been few and those that break the heart many more, the epic love between the two has literally conquered us for the emotional power that characterized it from the beginning to the tragic ending. 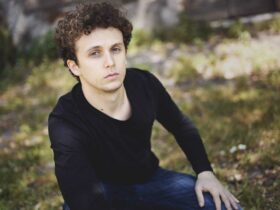 Riverdale and much more: interview with Mirko Cannella