In this review we will delve into The Mandalorian: First Gallery Diorama by Diamond Select Toys statue

To the world of collecting on Star Wars and especially) The Mandalorian, we at TechGameWorld.com are not, after all, newies. After reviewing both the protagonist and the antagonist of the Disney + TV series in version action figure, we can’t stop here!

After two crackling seasons in George Lucas’ space, between breathtaking photography and an Italian Western mood, The Mandalorian won us over. Waiting for the third season or, at least, of “The Book of Boba Fett“, The desire to see what Jon favreau e Dave Filoni they have in store for us and increasingly nagging.

And here comes Diamond Select Toys. After announcing the statue in May of this year, we had the pleasure of taking a detailed look at the “The Mandalorian: First Gallery Diorama by Diamond Select Toys“. Let’s see all the details in the course of this review!

As with any review of the “Nerd Stuff“ section, let’s start with sales packaging. While not one of the best display boxes in your collection, this one is for sure generous in size. With a height of 31cm, by 28.5cm in width and 32 in depth, the box has a black base color. This is characterized by large windows present on all sides, except on the back and bottom.

The front side houses the “Star Wars” logo, that of the company and the collection to which the statue belongs, as well as the stamp which specifies that it is aDisney exclusive. The two sides house the large plastic display cases, as well as the Star Wars logo and nothing more. The backinstead, it replaces the window with a ‘image of the statue in question, presenting the various logos of the companies and, this time, also that of Gentle Giant.

While the bottom exposes only the various wordings of the case, the upper part leaves room for yet another window from which, in the exposed case, the light can radiate to better observe our statue. Statue which is contained in a plastic blister that can be removed from both the upper and lower side, once the 4 security seals. Although this blister provides excellent protection to the product, the two plastic sides were not interlocked, making opening a little too easy and dangerous as it could easily slip when we open the package.

Once we pulled out the statue, we noticed that the bottom of the box features the Clan Mudhorn symbol in plain sight, while the internal background is a gray-like color. In addition to the statue, we will have a small leaflet with different Gentle Giant products belonging to the Star Wars saga. 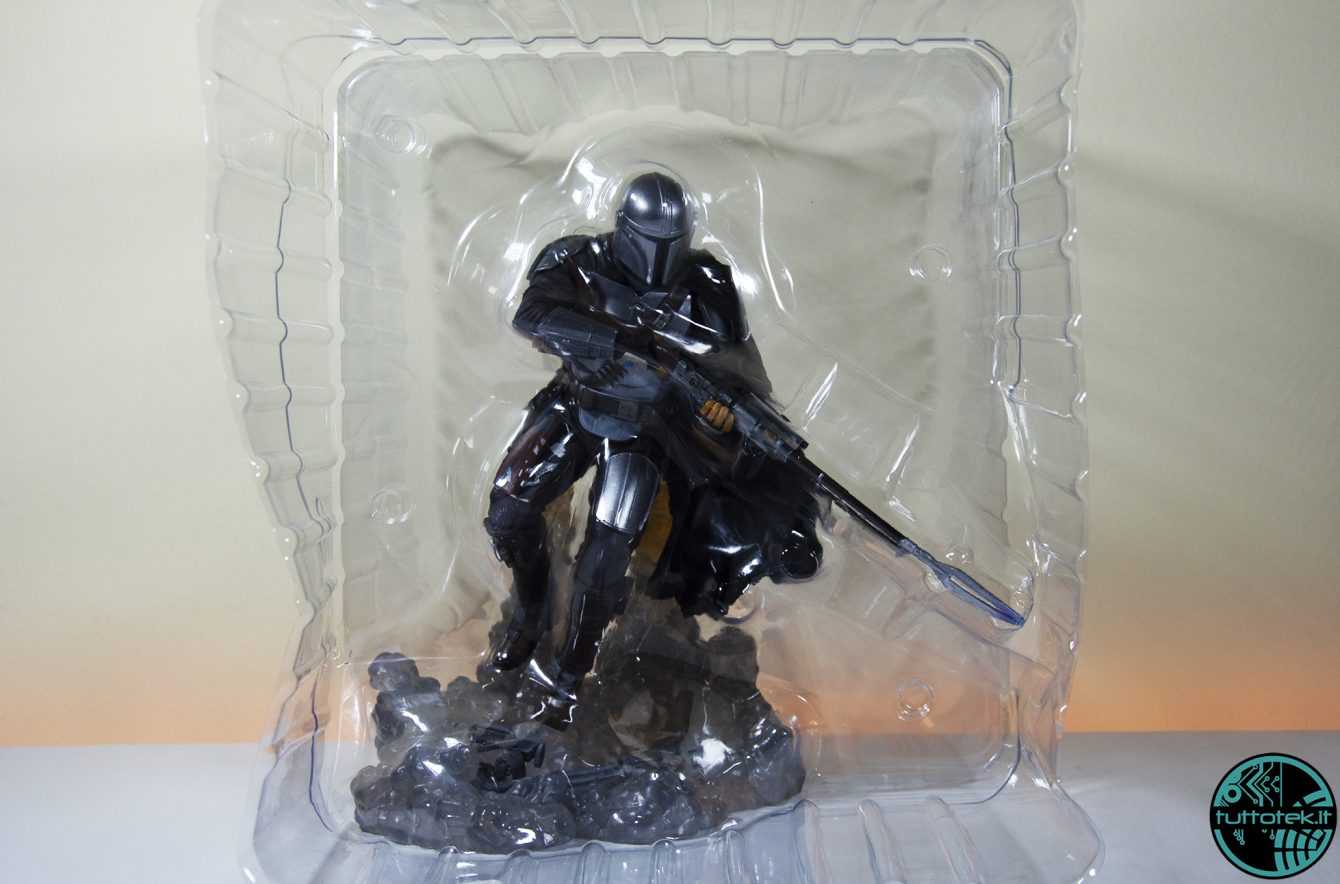 Made totally in PVC, this statue enjoys a construction really made with flakes. The diorama reaches anmaximum height of 24.5cm, for a base depth of about 18cm it’s a length (counting the rifle) di ben 28cm. This reproduction is, therefore, in scala 1:7.

Let’s talk about the pose in which the statue was carved, connecting us to the reason why its construction surprised us. Well, for how the base is made, with a smoke effect sculpt that, despite being “empty” at the bottom, allows this diorama to be very solid. The support that connects the actual statue to the steam below are the flames coming from the jetpack of our Din. We assure you that such an iron stability for a statue with such poses, composed solely of PVC, is really rare. This robustness also shines through in the weight of the diorama: ben 819 grams!

Leaving aside the base (which we will deepen later), let’s talk about the reproduction of the Mandalorian. Well, the latter boasts aheight of about 23cm but, being slightly bent forward, it allows the diorama to be more “contained”. Protected by his armor in Beskar, as we see him at the end of the first season, the representation enjoys numerous details. Among the most obvious we can find the Mudhorn logo on the shoulder pad, the blaster pistol placed in the holster, as well as the knife in the boot, up to the ammunition and grenades on the belt.

On the back we can find the jetpack in plain sight, to the left of which theiconic poncho of the protagonist. Sending takes hold of his faithful fucile Amban in flight, pulling the trigger with one hand and holding it with the other. A detail that has left us slightly perplexed is the removable front sight. Once we opened the package, we found some sort of protective plastic. Upon removal, the viewfinder practically fell on my desk and I thought it had been damaged during travel. In reality this was not the case since by placing the viewer slightly on the weapon we can install it. Although it does not fall easily, we cannot say that this is very secure to the weapon once it is engaged. 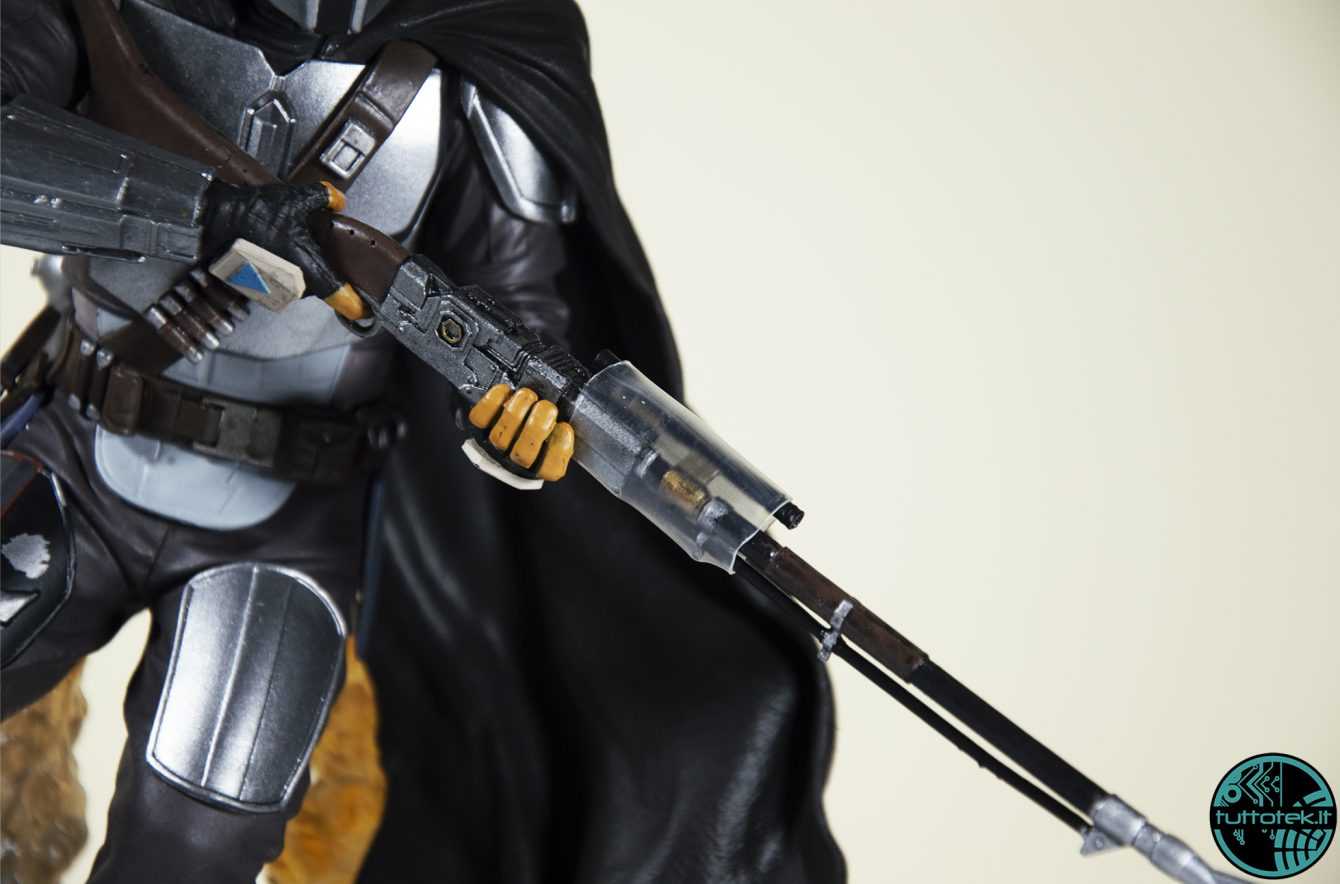 The base is made entirely by simulating smoke. Between points where the steam is thickest, while others where it borders our library, the visual effect is magnificent. In the front, at the feet of the bounty hunter, we will find what remains of a heavy machine gun in gray color. Although we said earlier that the base is “empty”, this is it reinforced by rigid PVC sections to ensure greater stability.

We have very little to say: the statue is impeccably crafted. Maybe for the retail price of $ 49.99 to whom this diorama was proposed, he hadn’t given us too much confidence… and we were wrong. As anticipated, the work reveals the study of the creators who designed the composition, making it very stable. Despite this, the product was not affected in aesthetics, quite the contrary. Once displayed on a shelf slightly higher than us, the diorama will come to life, showing us all its positives.

Let’s go into more detail, starting with the helmet. Between the typical black “T” shaped “window” and the different grooves, the Mandalorian helmet is faithfully reproduced. A surprising treat is that this helmet is not a single piece of PVC “Full” but, looking at it from below, you can see some gaps, as if there were Din’s face underneath.

The armor is also flawless. There are numerous minutiae present throughout Mando’s body. All parts in Beskar are excellent and reproduce the armor in a worthy way. We have, in addition to the symbol on the shoulder pad, i details of the weapons present in the vambraces it’s a Beskar’s casting in the piece of armor placed on the right thigh. Some fabric parts enjoy linear motifs made with a slight engraving on the PVC. There are clearly the folds appropriate, both on clothes and on boots. The latter are composed of various levels and particularly well sculpted.

On the back we have the jetpack with the various grooves and a shape faithful to the one present in the TV series. One of the best parts is definitely the hunter’s weapons. On his rifle we can find tiny details, the barrel with sections in variable thicknesses, as well as the forked butt and toe. The model, in general, is very consistent. One of the features we liked the most is the pistol placed in the holster: really beautiful. Not bad even the undone machine gun which, when compared with the other components, does not particularly stand out.

How can we not talk about the base? Between the fluttering cloak and the hood of smoke, the “dynamic” effect is assured. The flames start from the mouths of the rocket pack in a less tangled way, to go rounder as you go down. The rendering of the entire diorama improves not a little thanks to this base that is a real strength of the product. 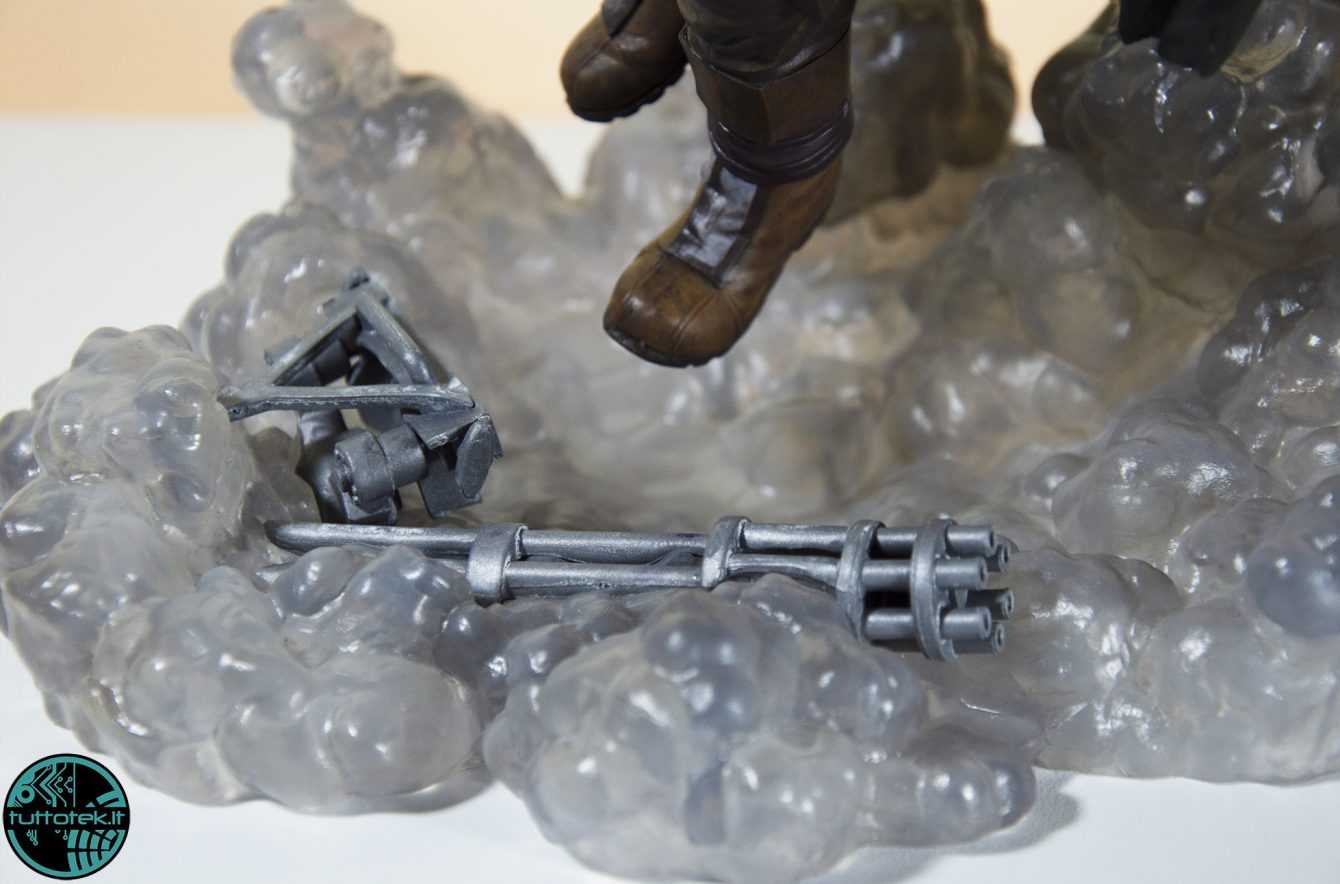 As for the painting, this statue has many ups, but also some small errors. Let’s start with the most impactful part: the two flames. Being made of semi-transparent plastic, the two supports are characterized by a color gradient. From a brighter initial orange hue from which the natural light shines more, proceeding downwards, the paint becomes more opaque, fading to off-white / gray. These painting variations are the icing on the cake for this fantastic base.

Speaking of Mando, however, his armor does not have shades, but different shades of color. THEThe Beskar is covered with a pearlescent and opaque varnish, which manages to reflect lightly. The only parts they present dirt details I’m gloves e boots. The colors used to characterize the armor are consistent with those dressed by the protagonist. There are excellent variations on the armor section that covers the right leg, which recalls its original armor.

Covered in the same color used for the Beskar, the jetpack features a unique hue. However, even in the series the latter is equipped with a solid color, so nothing to say. The segment richest in variegated colors is the Abman rifle. Here we have the dirty silver of the body, with black details, all the way to the brown stock and the tip that goes from gray to purple, to simulate the barrel still hot after a successful shot. Another noteworthy detail is the grenades with a red center, which are well hidden and make us understand how much the Diamond Select guys are committed to its realization.

Unfortunately, side painting we have some buts. Looking at the diorama in detail we have been through gods small defects caused by drying of the paint, as well as some lowercase color smear. Nothing surprising, given the price at which it is sold. 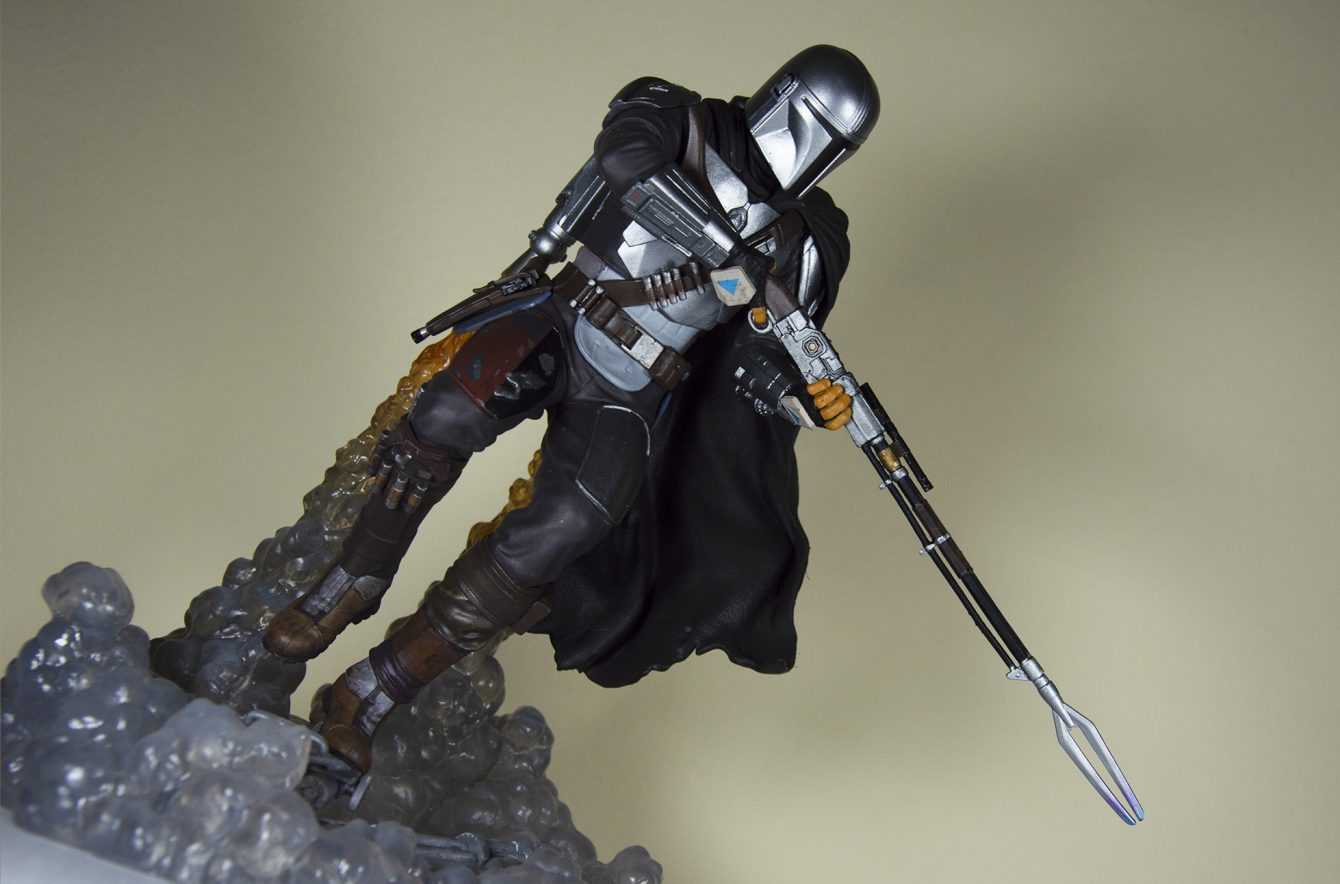 The Mandalorian: First Gallery Diorama by Diamond Select Toys is undoubtedly an amazing statue. Diamond’s boys, in collaboration with Disney, have managed to create a real masterpiece for The Mandalorian fans at a very low price. At just $ 49.99, they came up with a perfectly decent sized diorama packed with minutiae and a sensational pose.

Despite some slight imperfections, we would like to reward this product that we remind you to be an exclusive for the American territory.

In case you are interested in the Diamond Select statues, we suggest you take a look at the following page!