Our retrogaming journey continues with Baldur’s Gate: Dark Alliance and its successful attempt to bring the Forgotten Realms to console

The Forgotten Realms are one of the most popular fantasy settings never realized. If you’ve ever rolled a few dice in the company of your friends, you’ll know how much depth the manuals of Dungeons & Dragons have pushed over the years, not to mention the huge amount of novels and other products that have decided to take a cue from this license to create new stories that are often memorable. Video games, of course, are no exception.

On the contrary, it can be said that to reproduce on screen the experience of a match “in flesh and blood” is one of the oldest obsessions of our favorite media. In 1975, for example, the legendary was born The Dungeon, a title secretly designed on the system PLATO which can be considered in a sense the precursor of the entire world of role-playing video games and which had all the characteristics, or almost, that we now recognize as typical of the genre. Since then, the road has been really long and full of surprises.

The title we will deal with today in our column dedicated to Retrogaming is Baldur’s Gate: Dark Alliance, developed by Snowblind Studios and published by Black Isle Studios in 2001 for PlayStation 2, Xbox and Game Cube. We decided to talk about it because the announcement of its sequel, which took place two years ago, was a bolt from the blue for all fans of this long-forgotten IP and whose legacy is more complex and tangled than expected. With a new Dark Alliance upon us, then – or at least we hope – it still makes sense to brush up on its predecessor? In our opinion, yes, and today we will explain why.

Baldur’s Gate: Dark Alliance is a title that lends itself very well to opening up many discussions on retrogaming. First of all there has never been a conversion of the title on modern platforms: it can only be recovered in physical version for sixth generation consoles or by emulation. A version for PC, developed by none other than CD Projekt, was sadly deleted.

Secondly, Dark Alliance represents a curious attempt at bring to console the series of Baldur’s Gate, which has always been associated with the PC world and, consequently, with the control via mouse and keyboard. The choice was to adapt the rules of the third edition of Dungeons & Dragons in a simplified way and to transpose them into an action title with very frenetic rhythms. The most evident touchstone, moreover, is represented precisely by that Diablo that of the hack & slash he had effectively become the most important standard-bearer. 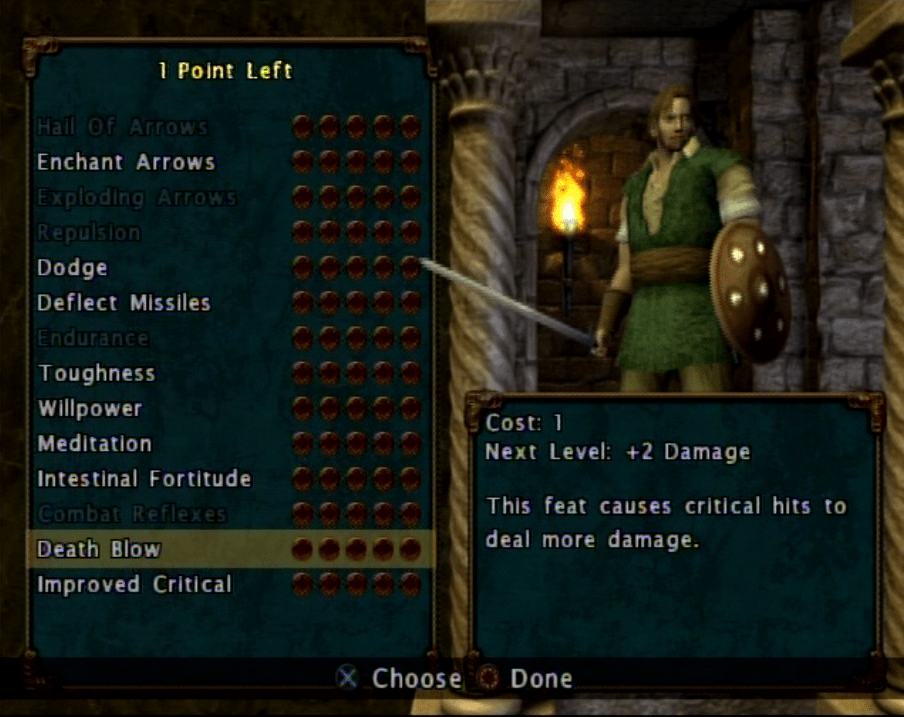 Via the party, via the freedom of action, then: what remained was the plain and simple loop of killings, collection of equipment and advancement of level which, after all, was already at the basis of the ancient Rogue. Dark Alliance gave birth, however, to everything a series of sequels and epigones that shared the graphics engine (something similar happened also on PC with the titles that used theInfinity Engine of Baldur’s Gate) and the basic mechanics. In addition to a sequel, Dark Alliance II, it is necessary to mention at least the beautiful Champions of Norrath: Realms of Everquest, which is perhaps the most complete expression of this formula.

It was about a second way to the hack & slash genre, which did not require a mouse and keyboard and could afford, thanks to the analog control system, to also incorporate elements taken from the genre platform. A very interesting idea that today is not seen very often in this type of securities. Snowblind Studios, unfortunately, closed its doors in 2011, after the publication of The Lord of the Rings: The Northern War. His employees merged into Monolith Productions and it seemed that there was no future for Dark Alliance, at least until the announcement of a reboot by Tuque Game, coming this summer on PlayStation, Xbox e PC. 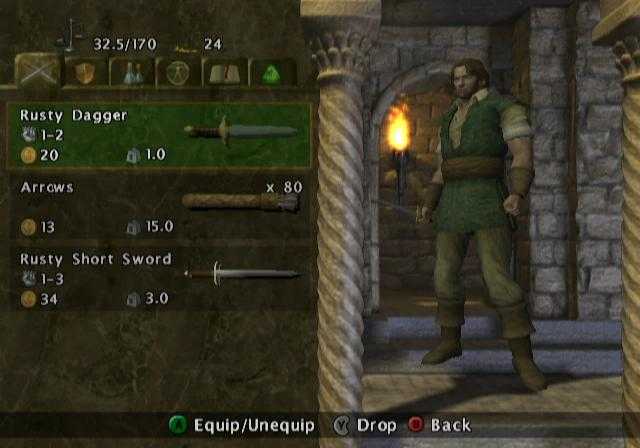 Who does not play in the company … – Retrogaming, Baldur’s Gate: Dark Alliance

Baldur’s Gate: Dark Alliance could be played if desired completamente in single player. The player could choose between three preset characters without the possibility of customizing them aesthetically. Each of them proposed a fairly classic archetype: theArcane Archer he preferred ranged attacks and could charm his arrows with various elements; L’Enchantress he could use various spells at long, medium, or short range; the Warrior, instead he was… well, a warrior, who did warrior things and sowed death and destruction among the opposing ranks with the sound of axes and hammers.

By killing monsters and leveling up, each of these three heroes unlocked new skills and new talents, and there was no lack of a complete system of loot and equipment. New weapons and armor could be either collected from enemies or purchased from merchants in the city. The setting, as you can see, is reminiscent of Diablo, but it is there something that particularly differentiates the Snowblind Studios title from Blizzard’s masterpiece. Specifically, it is his dialogical propensity. 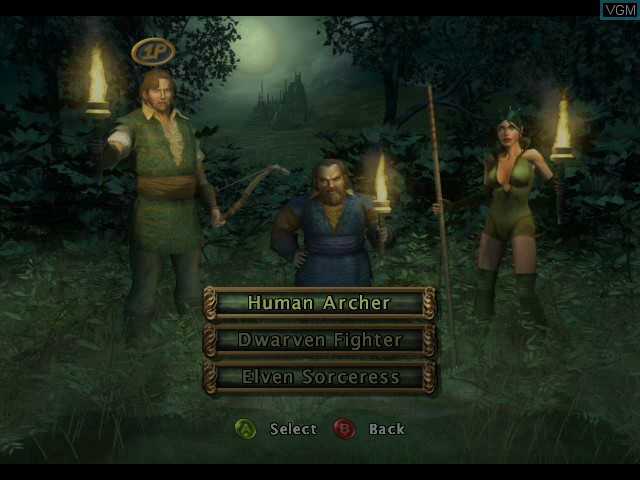 The title opens with a sequence in which the narrator (or the dungeon master, if you like) introduces us to cities of Baldur’s Gate:

The night has fallen for a few hours and we, lonely travelers, venture through the deserted streets in search of an inn, when here comes a group of thieves that stuns us and robs us of our possessions.

From here, a bigger than expected adventure will unfold that will involve the whole Sword Coast. The Dark Alliance storyline kicks off from a very overused opening and, to be honest, it does not stray too far from the usual clichés that we have come to appreciate over the course of so many sessions with friends, yet it is not at all evil in its development.

Once we have taken control of the player, in fact, we realize that dialogues with non-player characters, while not allowing us to make any narrative choices, they are often a lot deepened and branched for the average of the genre (and they all were dubbed in Italian!). The impression is precisely that of talking to one of the characters created by our trusted master, the ones we torture by asking them stupid questions about insignificant aspects of the location for the pure pleasure of embarrassing the narrator (and if you deny that you ever did, you are lying).

An interesting note: among the designers of the title it even figured Chris Avellone, known today (unfortunately) due to his legal events, but unquestionably author of the screenplay by many masterpieces of the role-playing video game (one example above all: Planescape: Torment). Baldur’s Gate: Dark Alliance, therefore, is really fun in single and allows you to build your build with a certain freedom, also being very replayable. But what happens when you face it in the company of a friend? 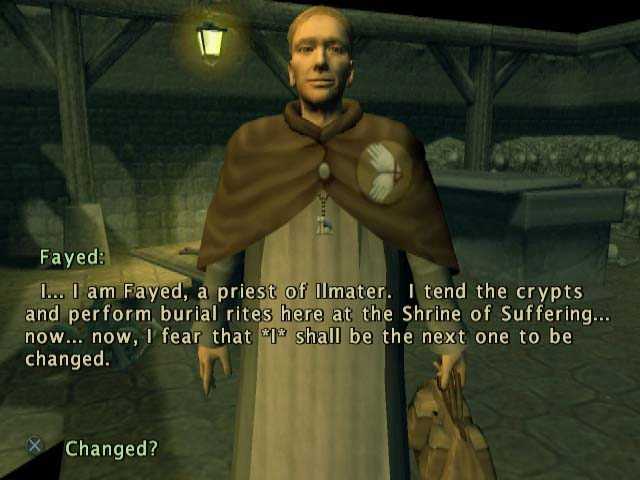 Anyone who has tried the Snowblind Studios title with a friend at least once will probably tell you that it is one of the experiences that comes closest to the feeling of a live session. The transportable weight is limited, the characters all have strengths and weaknesses and often you will have to economize on what to buy and when, since the money will never be enough. Speaking of the loot: unlike what happens in many other games today, the game world shares the fallen objects between the two players. Good luck for when you will compete to see who will collect that Morning Star +1 first …

Playing the campaign on a medium difficulty level, to be honest, the cooperation between the two players can also become a clash between who will grab the loot first. If you opt for the maximum difficulty level, however, you should prepare yourself for a not insignificant challenge. Even the meager of the sewer rats will be able to halve your hit points with a single hit, and if you consider that there is no type of enemy respawn, you will understand that the path of unbridled grinding is closed to the player. 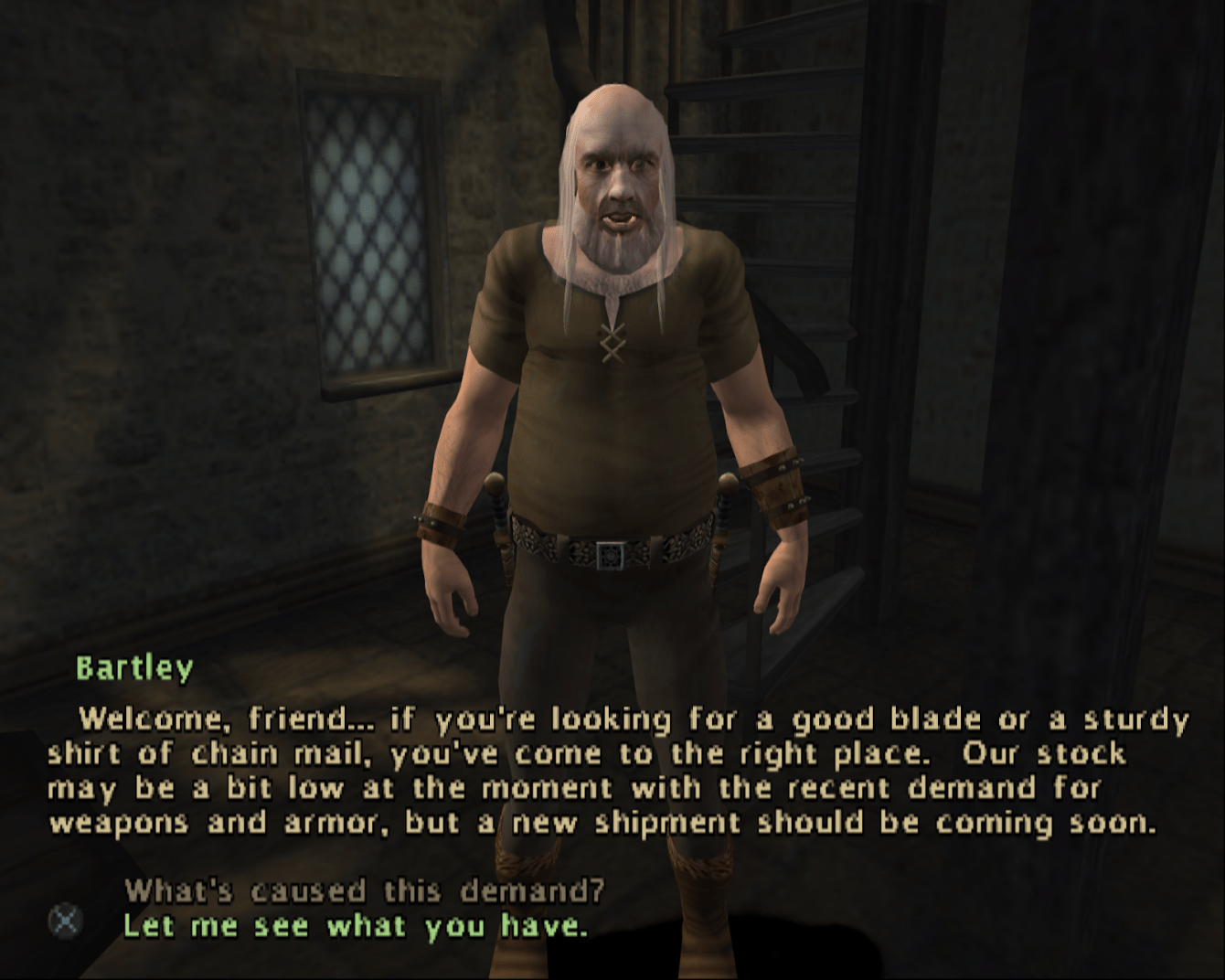 Collaborating will be the only real key to success, especially during the very difficult bossfights. The difficulty level changes the experience drastically that you are going to live. The beauty, of course, is also here. Together with a friend, Baldur’s Gate: Dark Alliance becomes one of the most accomplished accomplishments the world of Dungeons & Dragons has ever had on screen. Also because, let’s face it, the creatures and iconic races of the Forgotten Realms are crafted with painstaking care and attention to detail.

The game engine still defends itself very well today. The polygonal models are solid and rich in detail, even if the animations betray the passage of time. Surprising is the frame rate, firmly anchored at sixty frames per second; even better is the creation of water, equipped with its own physics and still capable of leaving the player amazed today. The waves move in a realistic way as we pass and reflect the surrounding light, eventually breaking against obstacles in a very credible way. Despite everything, very few aspects of the title have really aged. Even the inventory remains today one of the most intuitive and functional ever seen on consoles. 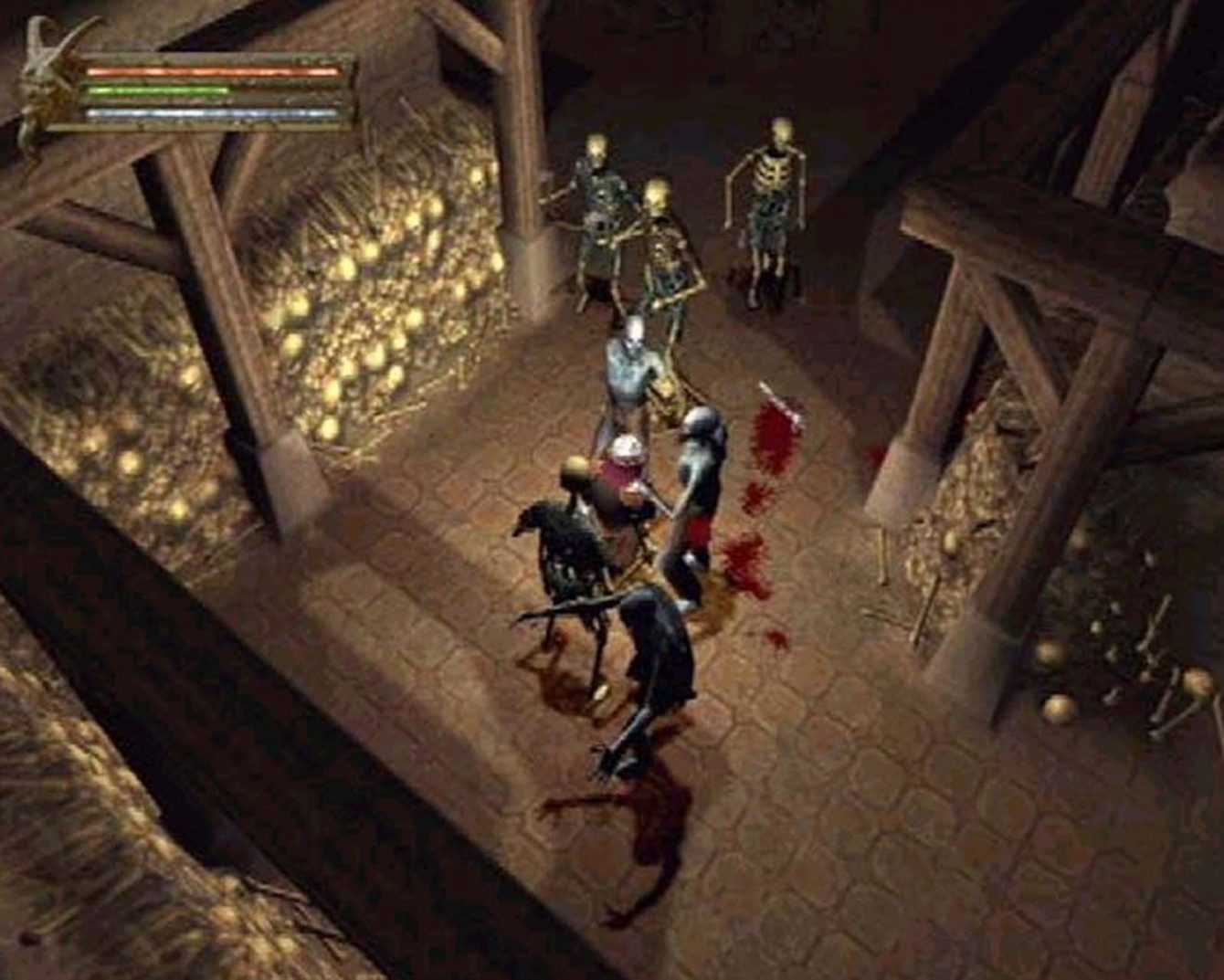 Our appointment with today’s Retrogaming ends here, in the hope of having put a little curiosity about Baldur’s Gate: Dark Alliance. Although the title has given birth to a series of sequels and also very successful spiritual successors, the public interest in this particular type of hack & slash for consoles seemed to have died out. The new chapter of the seriesPlus, it’s going to be a very different game in setting, judging from what we’ve been shown. As usual there is hope for a new remaster of the original that preserves its existence and prevents it from getting lost in the mists of time.

Have you ever tried any of these titles? Let us know in the comments. If, on the other hand, you are planning to buy one of the many licensed titles of Dungeons & Dragons, you could take a look at Instant-Gaming, which offers many of them at a discounted price. Continue to follow us on the techgameworld.com pages to always be informed about the world of technology and video games.