Every lover of fighting games, even the most uncompromising, has played Super Smash Bros. at least once in his life, a pearl of retrogaming that continues to shine even today with new chapters, tournaments and many additions. You are ready? Fight!

We are at the beginning of 1999 When Super Smash Bros. hits the shelves of Japanese stores, a truly impressive year for retrogaming in general that brought particular joy to gamers of the time, but also to modern ones who rediscover the masterpieces of the past.

In all this, our dear Nintendo 64 was preparing to take leave because, within a few months, it would be the turn of the Nintendo GameCube to enter the homes and hearts of fans with titles such as Super Mario Sunshine, Luigi’s Mansion, The Legend of Zelda: The Wind Waker, Mario Kart: Double Dash !! and so on, but there was still a card to play. And this card was inside a small bedroom. 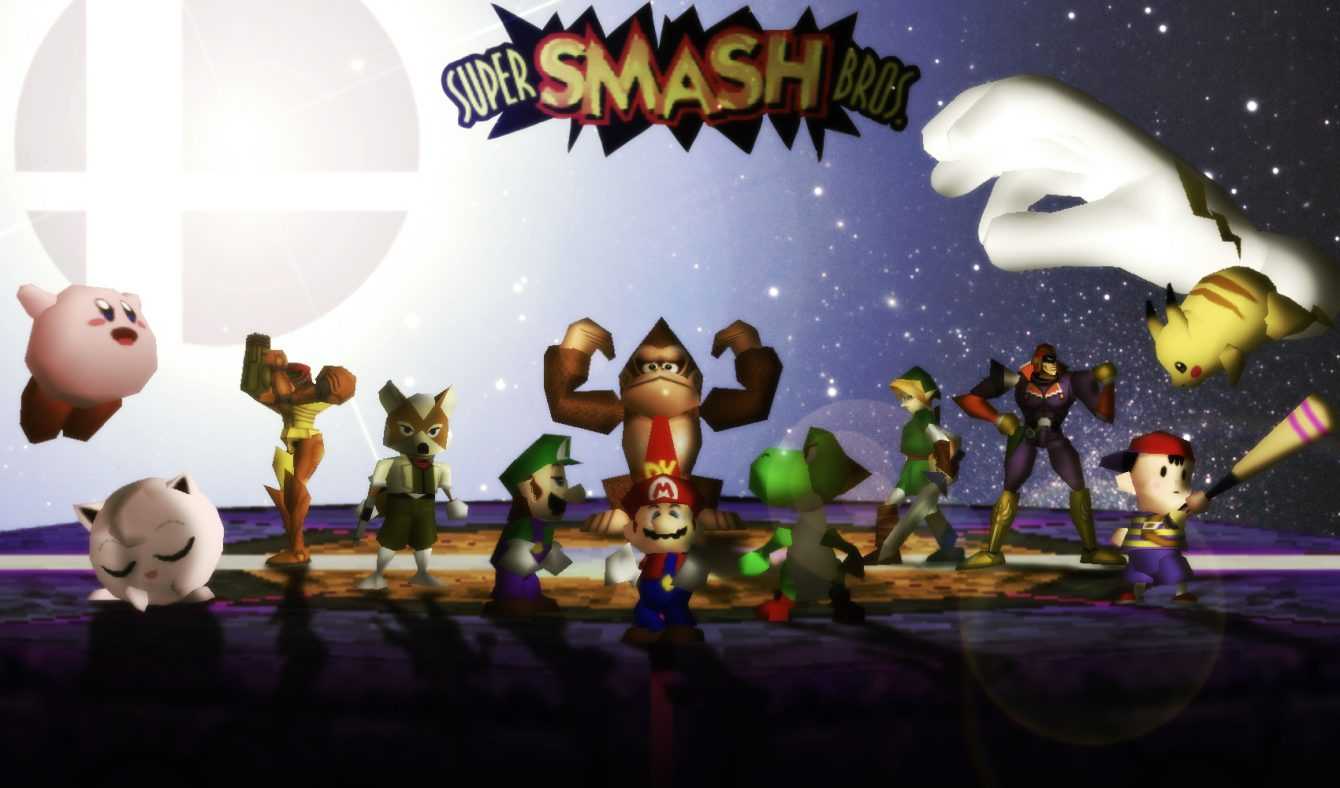 Can I play some more?

A bedroom opens in front of us while, from the window, the warm light of the sun begins to warm the environment when that’s it a hand appears who, from a basket, takes out the good Mario and puts him on the desk. However, he is inanimate and it collapses on the wooden surface as if it were a toy, but it is not over because, to keep him company, an equally inanimate person thinks about it Pikachu. However, the hand returns and begins to move objects on the desk and then quickly counts to three, snap of fingers and voilà!

Our heroes come to life and the environment around them transforms into respective “game kingdoms” such as, for example, the Princess Peach’s Castle, that of Hyrule, the Donkey Kong’s jungle hut and so on. Kingdoms they know very well and will certainly not hesitate to exploit them to their advantage, are you ready to join the fray too? So choose your character and go! 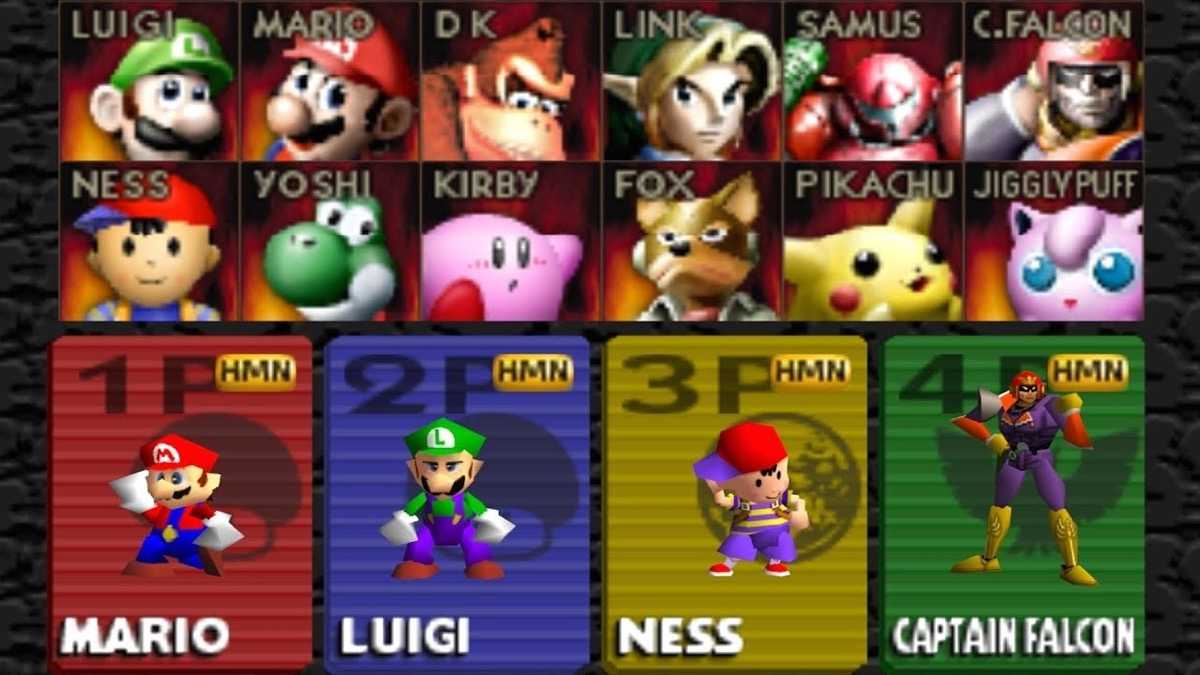 The above could already be considered a bit like the main story of this title, the simple materialization of a little boy’s imagination in the company of his toys (and we’re not talking about Toy Story) on a lazy afternoon. After all, who among us has never done it? Take your favorite toys and make them “fight” with each other in improvised arenas until arriving at an iconic final battle that here will be halfway between the goliardic and the grotesque.

Obviously, we are not faced with one of the classic narrative lines of fighting games that see the arrival of champions from all over the world for a tournament (Street Fighter, Mortal Kombat, Tekken, SoulCalibur, Virtua Fighter etc.), but do not worry because punches and low blows will fly from everywhere! In fact, if in the fighting games just mentioned, the main goal was to reset the life bar, here, on the other hand, we are based on percentages.

Specifically, the higher the percentage of damage suffered by the opponent, the more easily they could take flight. L’goal of each round it is in fact to throw the opponent off the screen or, alternatively, to see him disappear in the distant horizon behind the game arena or blurt out directly on the screen to make everything even more fun and, at times, cartoonesco. 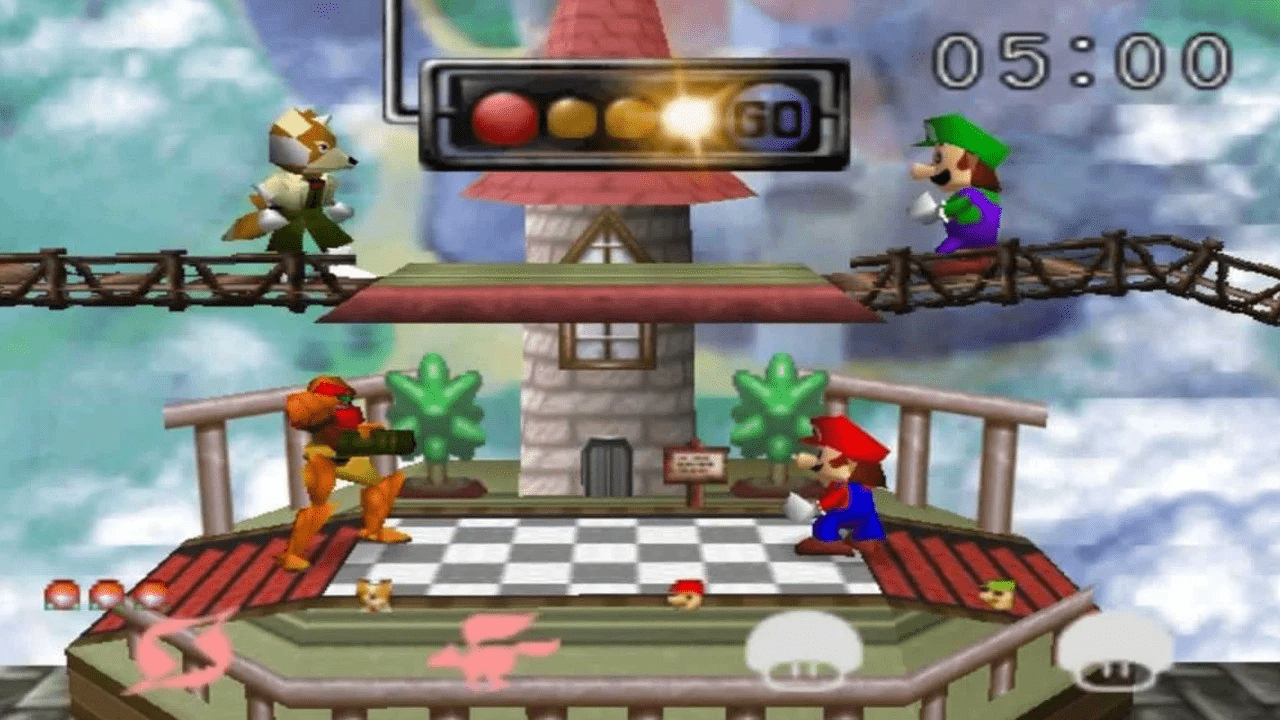 Of course there will not be only the bare hands, or the weapons typical of the player characters, with which we will have to deal. In fact, there will be a whole series of crazy weapons coming from the various Nintendo worlds and not like the hammer coming from Donkey Kong’s first cabinet, the Bob – ombe from Super Mario Bros. 2, the Maxim Tomato from the Kirby chapters, the pokéball containing a small circle of first 151 Pokémon for help in battle and much more.

In short, the nice thing is that, even those who have never picked up one of these Nintendo titles, after having a good feast of laughter and punches, he can go and get one of these titles to increase his personal videogame culture. Ah, then pay attention to the game arena itself, it does not necessarily remain stable so watch out for the unexpected! As for the game modes, however, we start from the very classic single player.

Once you have chosen the character, the difficulty level, the color and the number of lives you will throw yourself in a series of challenges against other opponents alone, in teams, in groups, in a giant version and even more pixelated with the mid bosses. All this will lead up to the final confrontation with the hand of the beginning, the Master Hand. Then follows the versus mode where it will be possible connect three more controllers to your Nintendo 64 and have a nice challenge with friends. Finally there are two minigames, also present in the single mode going to “intersperse” the challenge, such as Break the Targets e Board the Platforms. Here it will be necessary, respectively, to destroy the targets scattered along the path and try to jump on platforms in the shortest possible time. 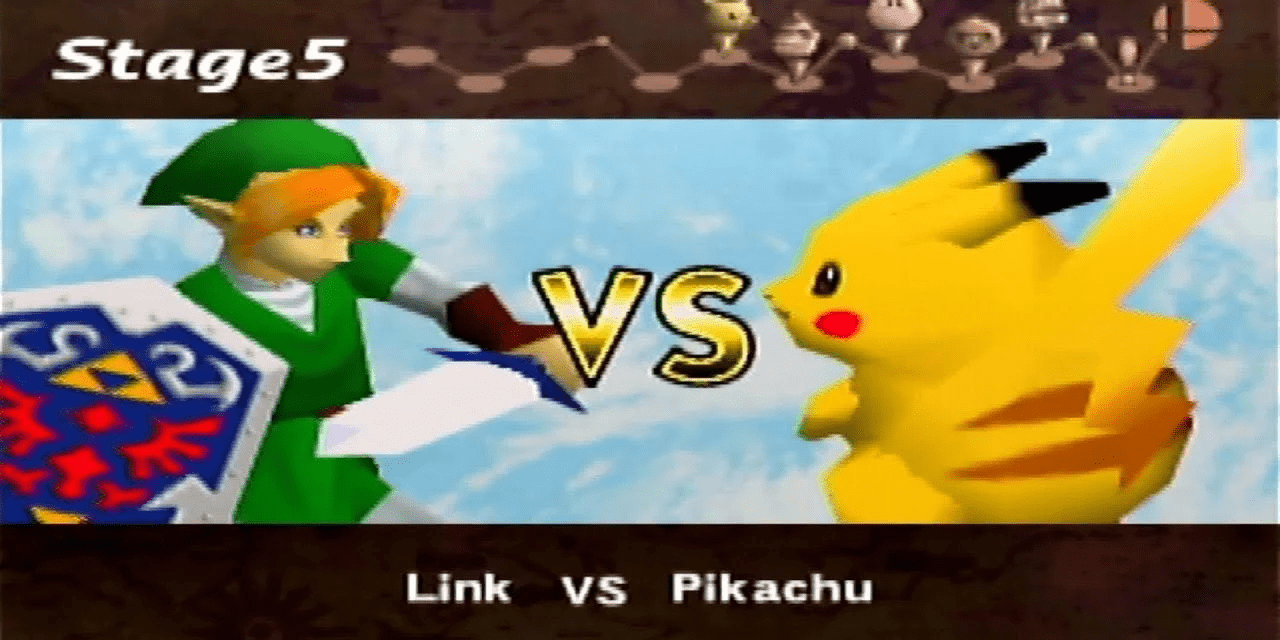 L’announcer therefore calls his characters in the ring, but others you will have to unlock them yourself. How? But it is clear, ending the single player mode and after the final part where you literally have to hit the credits to get more info about the game and the characters, wait for a new opponent to be defeated to be able to count him among those selectable at the beginning of the game. We come therefore tocomplete, albeit restricted, list: 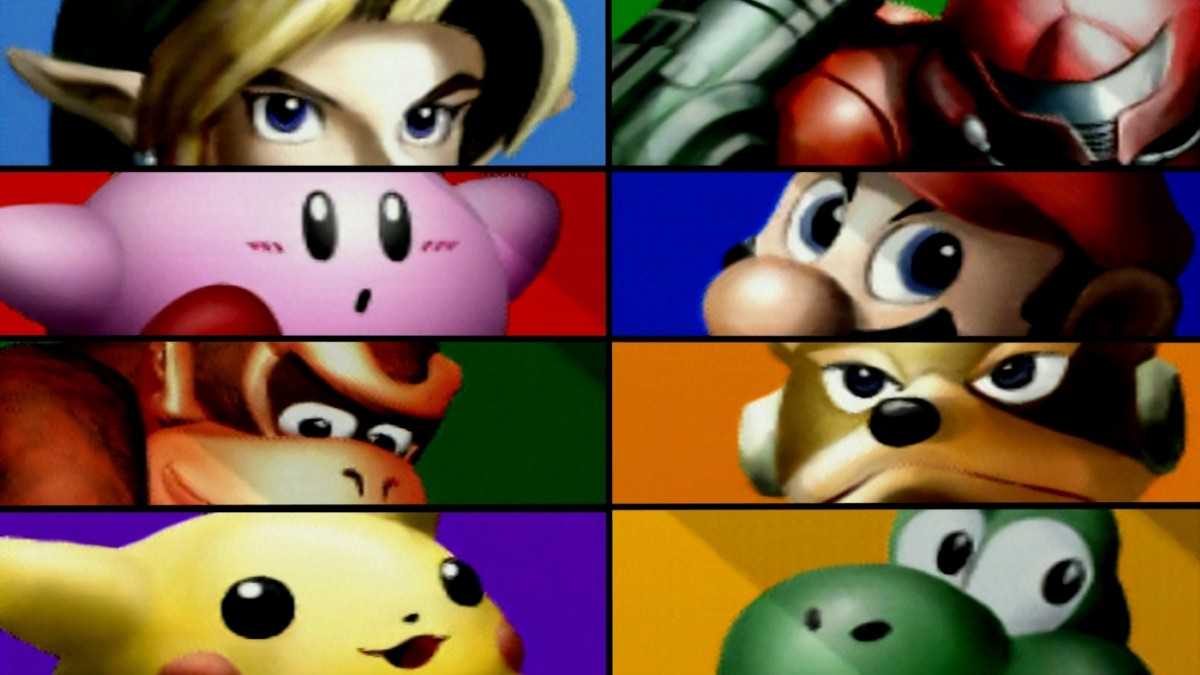 Obviously all of these characters were “Optimized” from a Nintendo 64 point of view and therefore, their appearance and some of their typical moves and objects present in the various game arenas, are directly inspired by their latest titles seen on good old Nintendone without neglecting the time spent on NES and SNES. Initially it was thought to also include gods villain par excellence such as Bowser, King Dedede, Mewtwo, Ganondorf ed other characters such as Peach, Wario, Mew, Toad, Banjo & Kazooie and even James Bond (in reference to the classic GoldenEye 007 from 1997).

In any case most of these just mentioned would be appeared in subsequent chapters that have been enriched with characters from other videogame universes such as the newcomer Sora directly from Kingdom Hearts, the blue hedgehog Sonic from SEGA and even Solid Snake from Metal Gear Solid! 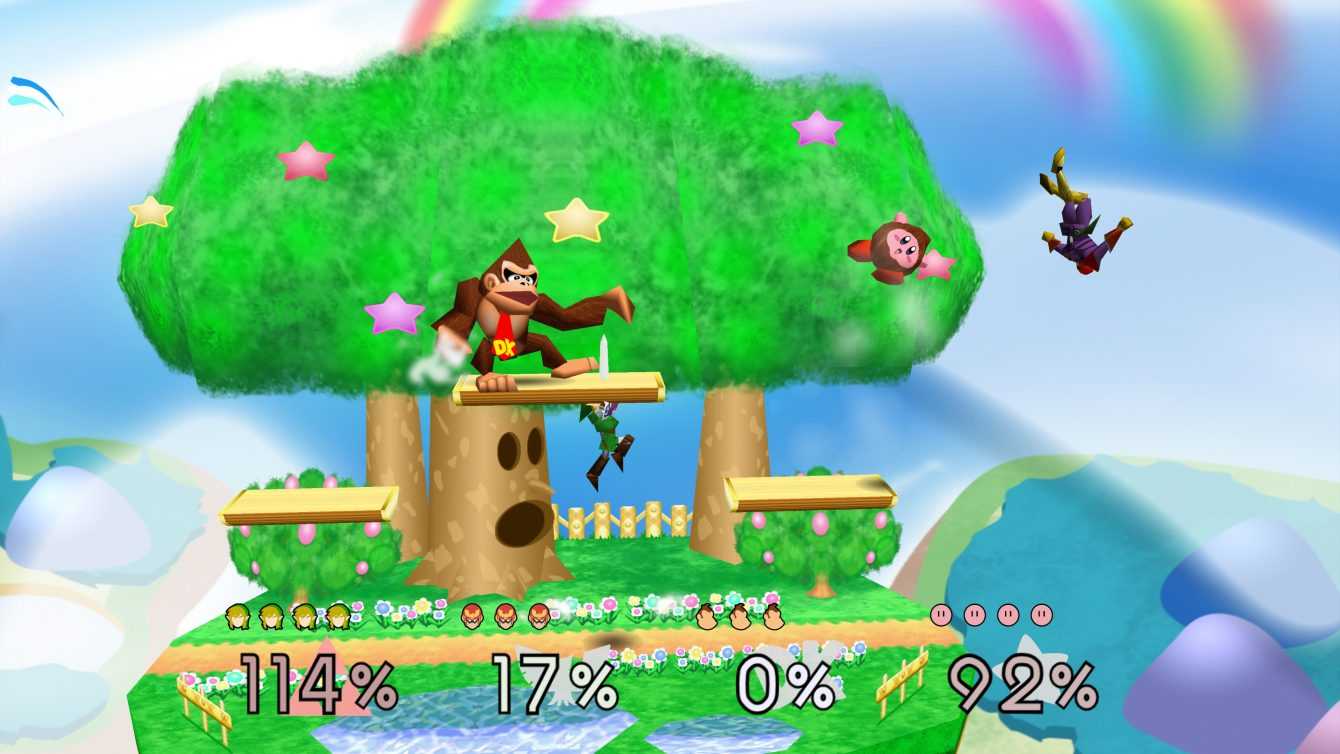 A game in economy, from the very beginning – Retrogaming: Super Smash Bros.

At this point it could be said that, from the beginning, Nintendo has staked everything it had, together with Hal Laboratory, on the lucky horse, but things did not go quite that way. First of all, the project of a fighting game started from the mind of Masahiro Sakurai who subjected his intuition directly to Satoru Iwata (former CEO of the Big N died in 2015 and also honored in The Legend of Zelda: Breath of the Wild among others).

However, the one that arrived on the test screen was another game with the title Dragon King: The Fighting Game (Kakuto – Geemu Ryuoh) which was originally slated to be released on SNES. Sakurai, however, was not too enthusiastic about it, too trivial and similar to other fighting games already on the market, so he had the brilliant idea of insert a percentage dammeter to make opponents fly off the platform.

In the end he got it, of course it is otherwise we would not be talking about it, and Dragon King became the game that all of us can see today with no trace left, or almost. In addition to the percentage damage that affects the force of gravity, a residue can be found in Captain Falcon’s moves since, the saga of F – Zero, did not have any fighting modes and therefore it was necessary to create new techniques for this character.

Made relatively cheaply, this can be deduced from the design of the truly polygonal mid bosses, from some arenas, from the small number of playable characters and from the final part of the game where you have to “hit” the names of the credits, the game was advertised with the dropper and , initially, it was thought to keep it “relegated” only to the lands of the Rising Sun.. But success goes beyond all borders and this is why, fortunately, the game has come down to us. 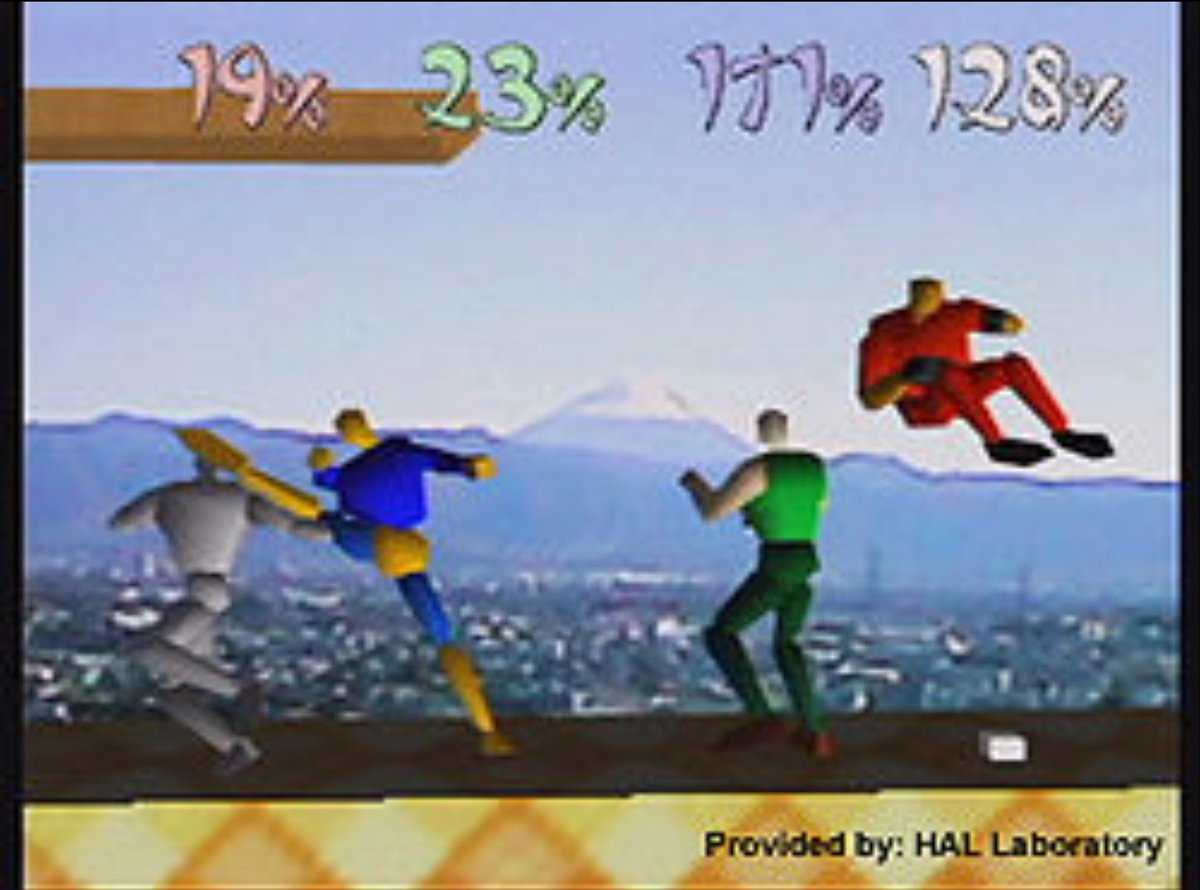 Basically, what we found ourselves in our hands was a fighting game that is truly out of the box where it was even possible to play in quattro and equipped with a very comic book as if to reflect the childish element of the title. It should also not be forgotten that everything was seasoned with just the right amount of nostalgia above all thanks to the music coming from the different videogame worlds, first of all those of Buon Kōji Kondō, which made the whole experience even more complete and exciting.

And to think that dear Super Smash Bros. only arrived a year after the first Mario Party (another retrogaming gem that today has reached the seventeenth chapter entitled Superstars) where the “clash” was much milder, but no less fun! Today the series has become much richer and more complete thanks to the following chapters such as the Melee for GameCube, more than recommended, the Brawl for Wii, the chapters dedicated to 3DS e Wii U and finally the Ultimate that continues to thrill on Nintendo Switch.

In any case, given that more and more games for Nintendo 64 are appearing on the aforementioned Switch, it would not be bad at all to see this title among those that the Big N has made available. Waiting to discover them, indeed to rediscover them, then why not brush up on this game if you still have a Nintendone? Alternatively we advise you to retrieve the special Starbomb song for a quick musical review.

If you then want recover other titles from the Grande N, and more, at the best price ever, then we advise you to click here, while, to be always up to date on video games yesterday and today, we are waiting for you on TechGameWorld.com! For the rest, good blows to everyone!