Let’s find out together, with this long-winded review, if Disgaea 6: Defiance of Destiny managed to match and overcome a practically perfect prequel: the adventure of Zed and Cerberus begins

There is no denying it: the peak reached by the Disgaea series, since its first iterations on PlayStation 2, is undoubtedly Disgaea 5: Alliance of Vengeance. A title that has known superbly blend the deepest gameplay complexity ever achieved by the series with the sagacity and boldness of the script, inserting at least unforgettable characters. Six years after the release of the prequel (we remind you that the fifth chapter has arrived at the time also on Nintendo Switch in its perfectly successful Complete Edition) Nippon Ichi tries to surpass itself with a new chapter of its most famous franchise.

Disgaea 6: Defiance of Destiny arrived at the end of June as an exclusive Nintendo Switch in Europe, although in the West it was also released on PlayStation 4, and was anticipated by a generous demo from which we took our first impressions, collected in a ‘ preview. We were not particularly surprised by the return of Disgaea, as the two or three hours spent in the company of Zed and Cerberus seemed to us too inclined with an eye to the past. Let’s find out if our impressions of Disgaea 6: Defiance of Destiny have been confirmed by the full game with our review!

Zed and Cerberus are, respectively, a literally heartless zombie and a stuffed dog with a high-sounding name. Disgaea 6’s narrative actually begins with its ending. Zed finds himself in the presence of the Overlord and, for a series of (un) lucky events, the two start chatting about how our protagonists managed to defeat the God of Destruction. The events narrated are therefore a very long flashback of about 35 hours (for the completion of the main quest alone) of the exhausting adventure of Zed, made up of infinite deaths and resurrections in the continuous search for a way to defeat his eternal rival. We will discover the reason that drives Zed only very far with the unfolding of events, even if it has already been anticipated by some trailers and, in any case, it is understood quite soon. We avoid going further, however, to let you have the pleasure of discovering it.

The main problem with Disgaea 6: Defiance of Destiny’s ever-whimsical narrative is one: it’s slow. The prolixity of the first chapters, which serve to introduce us to mechanics and characters, but are still too redundant, will bore the most accustomed gamers in the world of Disgaea and who certainly did not need such a long-lasting introduction. On the other hand, we admit that it was still necessary to calmly present the various secondary characters, although NIS did it with interactions and events practically all the same, only set in different worlds. In short, verbose, slow and too diluted: the narrative of Disgaea 6 is far from the qualitative level of its prequel. 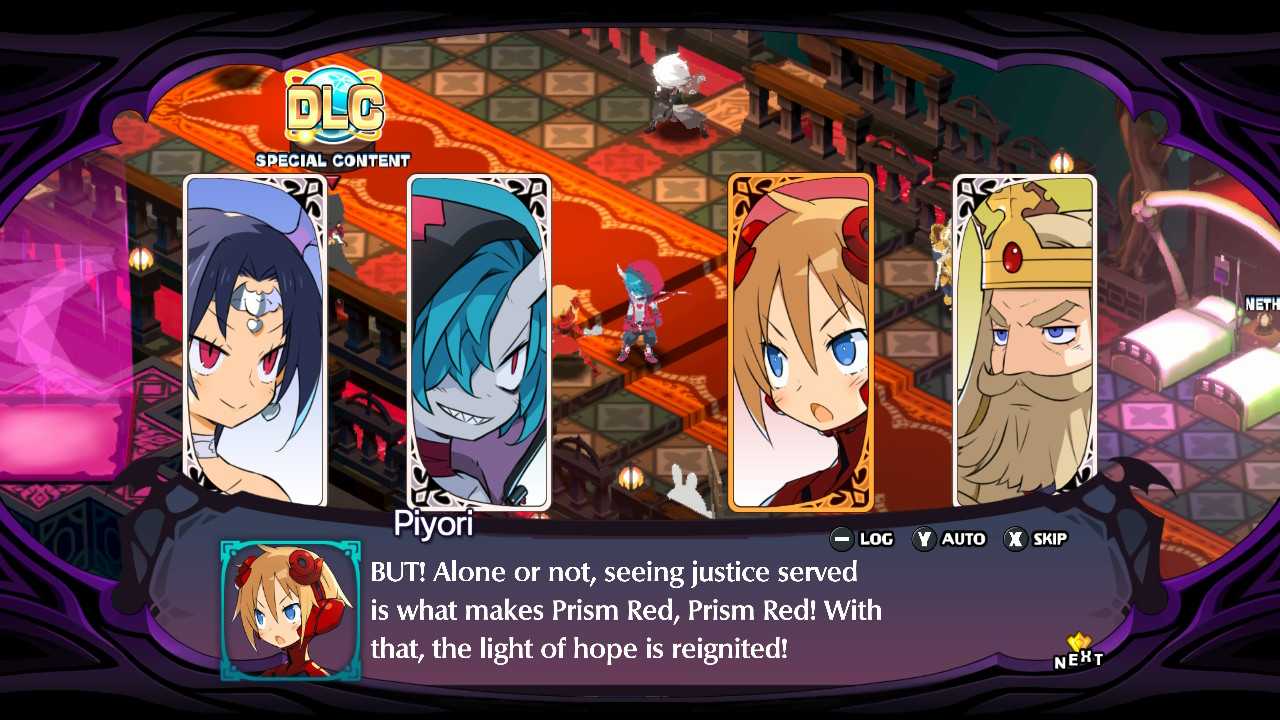 To keep everything afloat, of course, the gameplay returns, which has been reworked for the occasion in some details and made much more user friendly, leaving it practically intact compared to the previous iterations. Newbies will find themselves in front of a strategic JRPG, in which the fighting characters are placed on a chessboard and can perform numerous actions. Unlike the classic S-JRPGs (whose imprint was also recently taken up by Project Triangle Strategy), however, Disgaea allows you to use any token in any order, thus not relying on stats like Speed. An even greater freedom if we consider that the pieces will not attack until we finish the turn or we do not give the order “Execute”, making the clashes even more manageable.

Combo attacks with the other adjacent pawns and counterattacks are back, as well as special features such as being able to stack fighters to overcome ditches or reach elevated positions where there are treasures. The classic core gameplay of all Disgaea is back, with the difference that this time the “number” factor has been brought to the nth degree. Just think that the level cap of Disgaea 6 is 99,999,999 and that, from the beginning, it is possible to cause damage from hundreds of thousands of units to enemies. All this, however, in our opinion, immediately loses its charm as it simply seems that the numbers have been multiplied by 100 without any kind of additional effect. Disgaea 5’s 2000 point damage was simply transformed, adding a few zeros, to that of Disgaea 6. 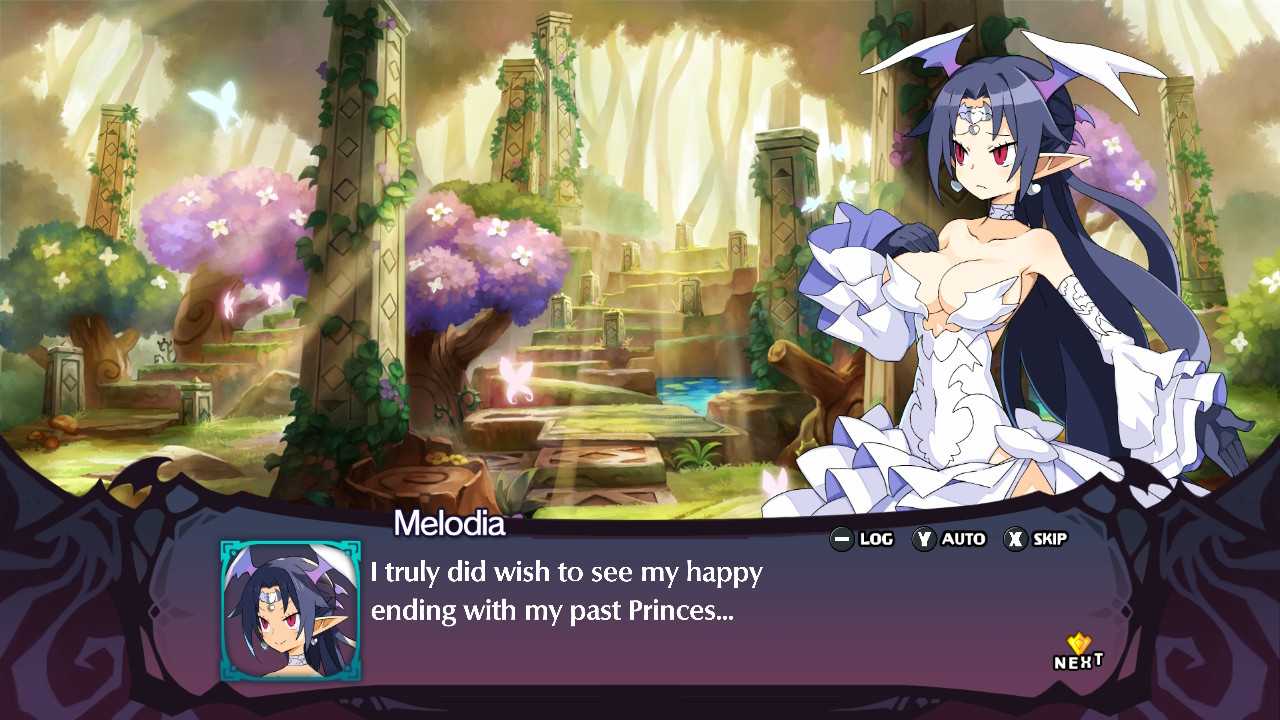 The customization possibilities of the various pieces, which now count as many as 22 different classes, are as always exorbitant. Leaving aside the return of the various shops, including that of weapons and objects and the Mana Shop which allows you to purchase new skills for the tokens, del Cheat Shop, which allows you to set the various obtainable levels of money, experience and many other technical details, the Dark Assembly. An addition much appreciated by fans and which allows, through the votes made in the “Senate”, to obtain various bonuses by bribing the voters. We can then, stupidly, change the commanded character or change the color of the clothes, or more technically increase the experience points and money obtained from the next fight or increase the radius of the explosions and so on.

Also through the Dark Assembly it is possible to use the absolute novelty of Disgaea 6 and, probably, the most significant: the Super Reincarnation. Through this feature, you can reset the level of the various pieces and make it go back to 1, but in return, using Mana, a decent bonus in terms of power and points to redistribute, permanently, to the various characteristics. It is also possible to increase the power of the reference class, in order to unlock new Evilities (passive skills) or active skills of various kinds. 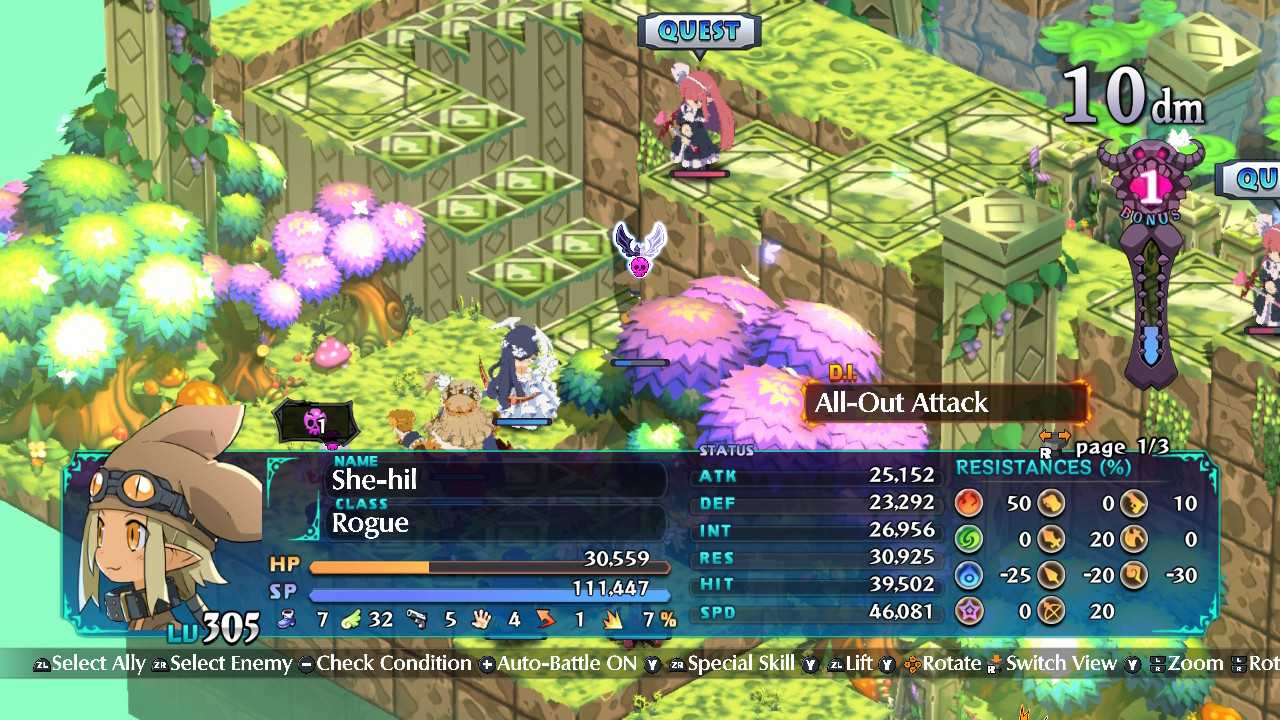 In all of this you will ask yourself: does it really make sense to reset the level over and over again? The answer is simply: yes. The benefits are gradually more and more evident, with the pieces that become exponentially more performing despite the level is perhaps lower than a quarter of an hour of play before. Furthermore, the level up has been made much easier because the grinding phases are also simpler. Fans know very well that much of Disgaea’s gameplay, especially in the endgame, is completely devoted to grinding.

In Disgaea 6: Defiance of Destiny, everything has been made much easier thanks to the introduction ofAuto-Battle andAuto-Repeat which, as you will understand, when combined together will allow you to automatically repeat a stage an infinite number of times. Maybe a feature not very welcome to hardcore gamers, but undoubtedly useful for the quality of life of the game that, while it is by no means difficult enough to necessitate excessive grinding in the campaign stages, it will become suffocating and devoted to repetition in the endgame. 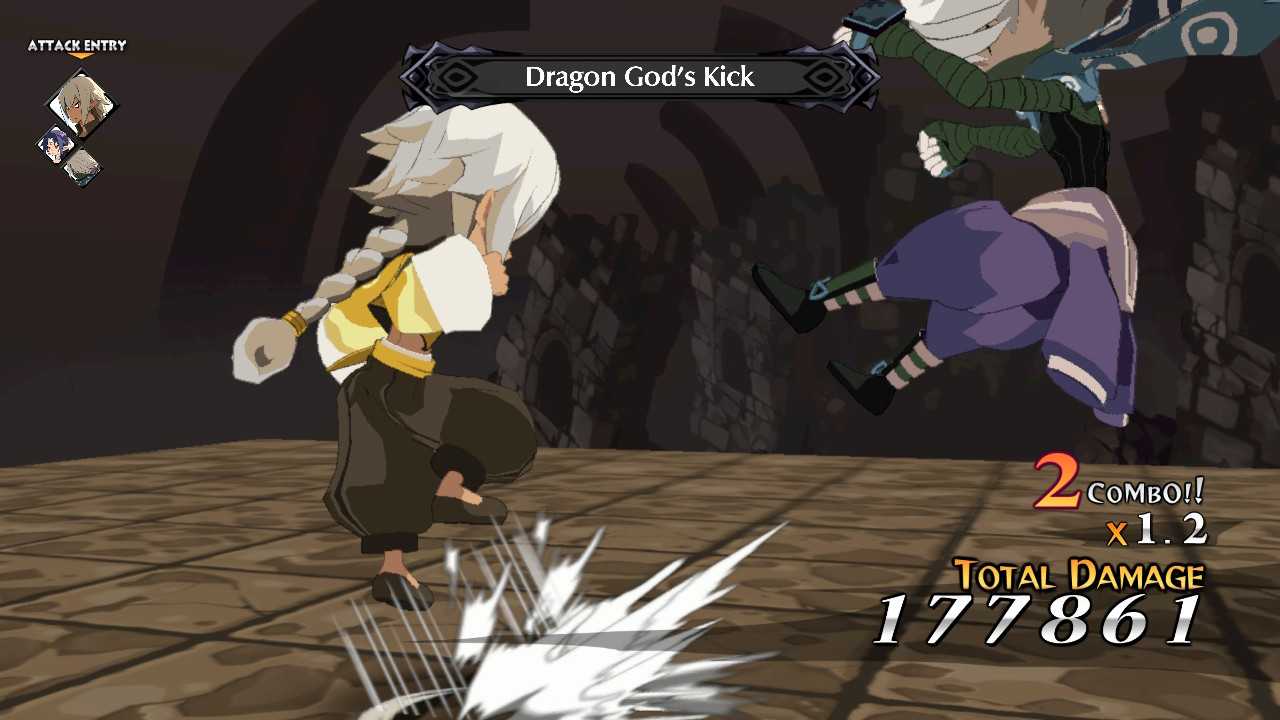 Technically speaking, we unfortunately find ourselves confirming what was said in our preview. The transition from the exquisite two-dimensional sprites of the previous chapters to the 3D ones of Disgaea 6: Defiance of Destiny was definitely a step too long for Nippon Ichi Software. Let’s admit that stylistically speaking the company has been able to keep its standards high, with graceful and aesthetically enchanting models, on the other hand we found ourselves faced with serious technical flaws, probably magnified also by the non-performing hardware of Nintendo Switch.

As we had already said in our preview, even in the review we unfortunately find ourselves having to emphasize how the three preselectable modes of Disgaea 6: Defiance of Destiny are reduced to a single viable path: the Balance Mode. The latter is a cross between Performance Mode, which should guarantee 60 fps (and obviously it does not) at the expense of a graphic resolution at the limit of myopia, and the Graphics Mode, which sacrifices (too much) the frame rate by visibly increasing the resolution. Too bad that in the latter case, during even quieter battles, we had gigantic drops in frame rates at the limit of the application’s freeze. Not wanting to become even more blind than we are, we opted for Balance Mode that, while it doesn’t guarantee such a stable frame rate, it’s still a good compromise.

Finally, a praise to the soundtrack that boasts several catchy tracks that stay in your head even after you turn off the console, in line with previous Disgaea chapters. Absent, as always, the Italian localization. By now, however, it is almost needless to say, Nippon Ichi has never used any other languages ​​other than English in Europe. 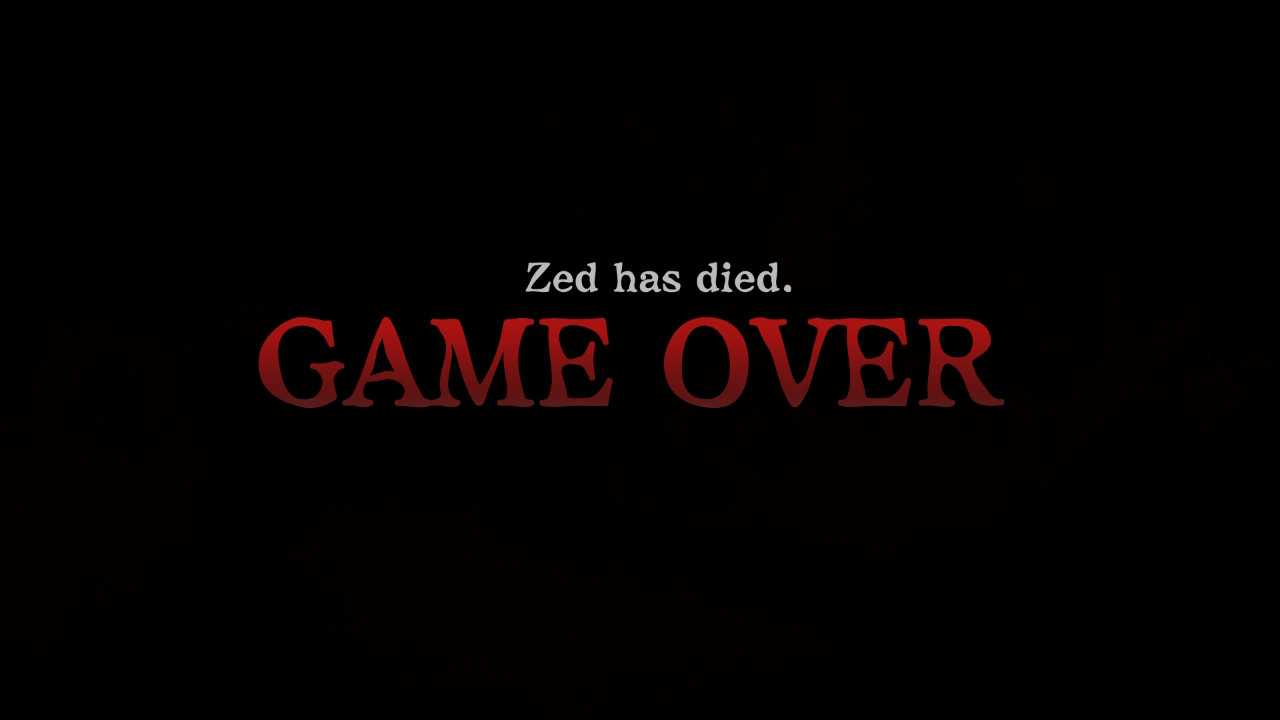 In short, to conclude this too long-winded review of Disgaea 6: Defiance of Destiny, we find ourselves in a bit of trouble. This is because, although we are talking to you as fans of the series, it is really difficult to find a specific reason to recommend this sixth chapter over the prequel. The core gameplay has remained practically intact, with some smoothing to the quality of life that made the grinding phases easier, and the Super Reincarnation is an interesting feature, but not enough to lift everything else. The technical complexities of the transition to 3D have put a strain on Nippon Ichi Software, which has not bothered too much to create a narrative that could interest both fans and newbies. In short: if you are new to it, we advise you to start with Disgaea 5 and then think about moving on. If, on the other hand, you are passionate about the franchise, buy it because you already know what you will find in front of you: numbers, grinding and a lot of satisfaction.

We remind you that Disgaea 6: Defiance of Destiny is available exclusively for Nintendo Switch in Europe. What do you think of this new iteration of the Nippon Ichi Software franchise? Write it to us below in the comments, we will continue to keep you updated with all the news, guides and reviews on videogame and tech! And if you are interested in game keys at affordable prices, we recommend that you take a look at the InstantGaming catalog!

A little more courage was enough!