In this review we will tell you about Mark & ​​Lara: Partners In Justice, a co-op investigative title developed by the Italian team Deep Monolith

In recent times, video games meant to be played exclusively in cooperatives they are becoming more and more popular. Just think of the recent success of It Takes Two to understand how much players appreciate this particular type of shared experience.

Given the growing popularity of this type of video game, it was only a matter of time before something similar was born here in Italy. In fact recently la software house nostrana Deep Monolith posted an interesting co-op investigative game called Mark & Lara: Partners In Justice and in this review we will talk about it in detail.

In Mark & ​​Lara: Partners In Justice the players will have to impersonate, precisely, Mark and Lara, two detectives who have been working together for a long time. This time the couple will have to face a very difficult case concerning the mysterious death of Mr. David Thompson. The man had spent a quiet evening in the company of two of his old friends, but was found the next morning hanged in the middle of the kitchen of his house. Most detectives would have labeled Mr. Thompson’s death as a simple suicide but Mark and Lara are intent on uncovering the truth, and to do so they will have to question the only two witnesses thoroughly.

This incipit is reminiscent of some of the most classic detective detective stories and as you go on in the investigation you will find that even the case will take an extremely predictable turn. This sense of already seen though it won’t hurt the experience, since the focus of the game is not the story but rather the way you live it together with another person. Sure, we would have liked to see a case a little more interesting, but in the end it is not a serious shortcoming. 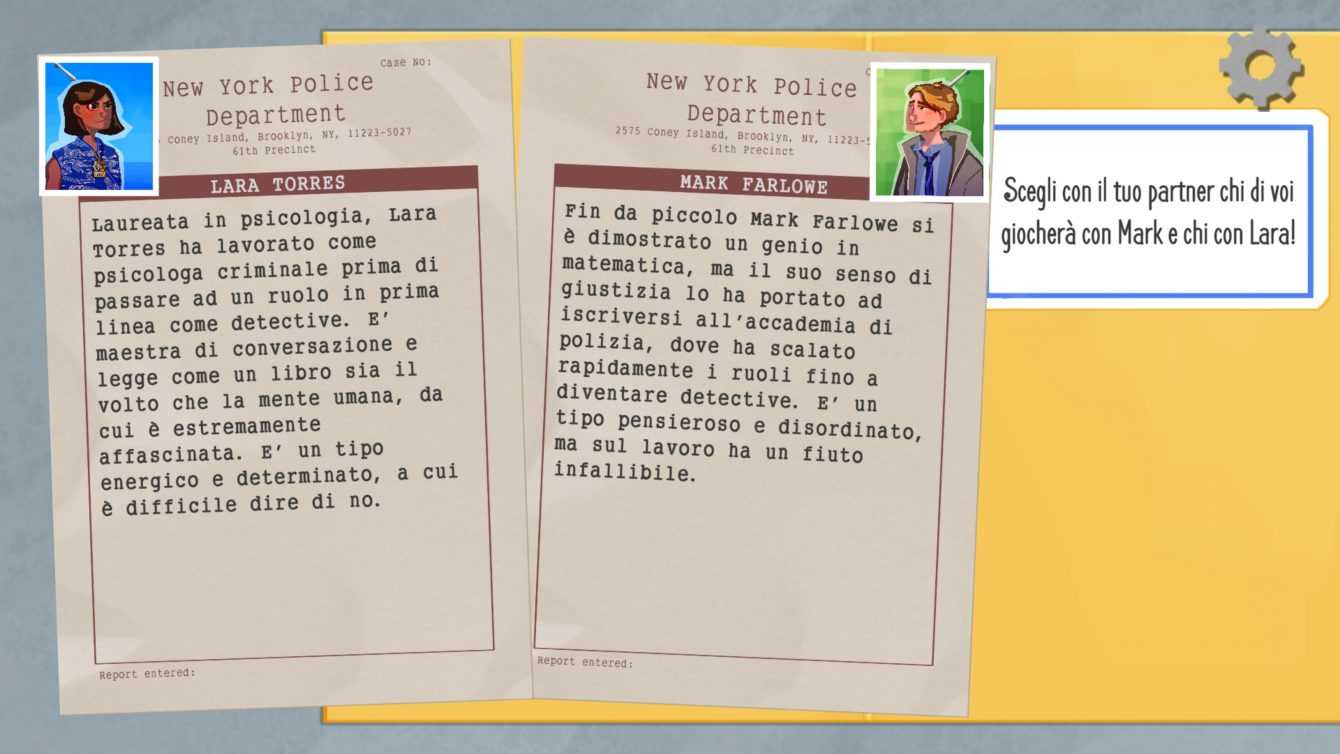 Mark & ​​Lara: Partners In Justice can be divided into two distinct sections: the interrogation e the investigation. During the interrogations you will have the task of ask questions to one of the two suspects to find out as much as possible about the events preceding the victim’s death. This phase is quite linear and, in addition to choosing some dialogues, all you have to do is listen to the depositions of the two witnesses.

The investigative section instead represents the main focus of the game, since here you will have to investigate the allegations made by the suspects. To do this you will have various means, such as i documents provided by the police station and a search engine where to look for information on past places and events. The main method by which to carry out the investigation, however, is that of compare the statements of the two suspects together with your partner.

To go forward in the game in fact you will have to find contradictions in the words of the two witnesses and to do so you will have to communication actively with your partner. Once you have found two contradicting sentences, all you have to do is enter the numbers associated with them in the appropriate boxes and check if your hypothesis is correct. But unfortunately this method is quite cumbersome and in the course of the game it could cause you many difficulties. This is because to advance in the story you will always have to select two very specific sentences which sometimes differ little from other similar statements. Furthermore the confusion also increases due to different less important contradictions which unfortunately are not in the least taken into account by the game. 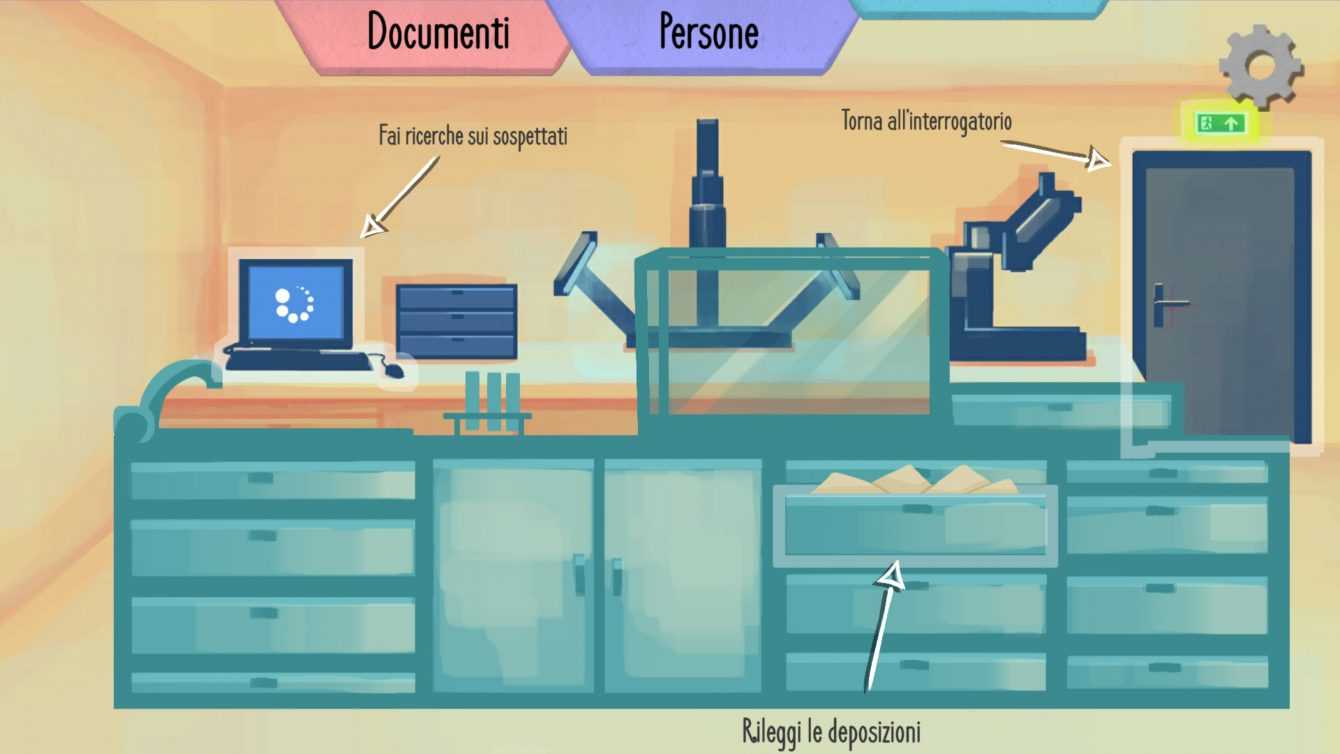 From a technical standpoint there isn’t much to say about Mark & ​​Lara: Partners In Justice. The game is extremely light and consists of only a few interactive screens. On the other hand, however, the game manages to stand out thanks to a artistic side really not bad. In fact, all the elements present in the game are designed with a very nice style that moreover manages to immediately highlight the personality of the various characters. Furthermore, also the soundtrack it is really good and you will often find it pleasant to stop for a few minutes to listen to the very pleasant background music.

Unfortunately however the game also suffers from some annoying bugs. For example, during our test we happened to get stuck within some screens or to find duplicate dialogues that made the search for contradictions very uncomfortable. Thankfully we didn’t come across anything about game breaking, but anyway these problems have damaged our experience somewhat. 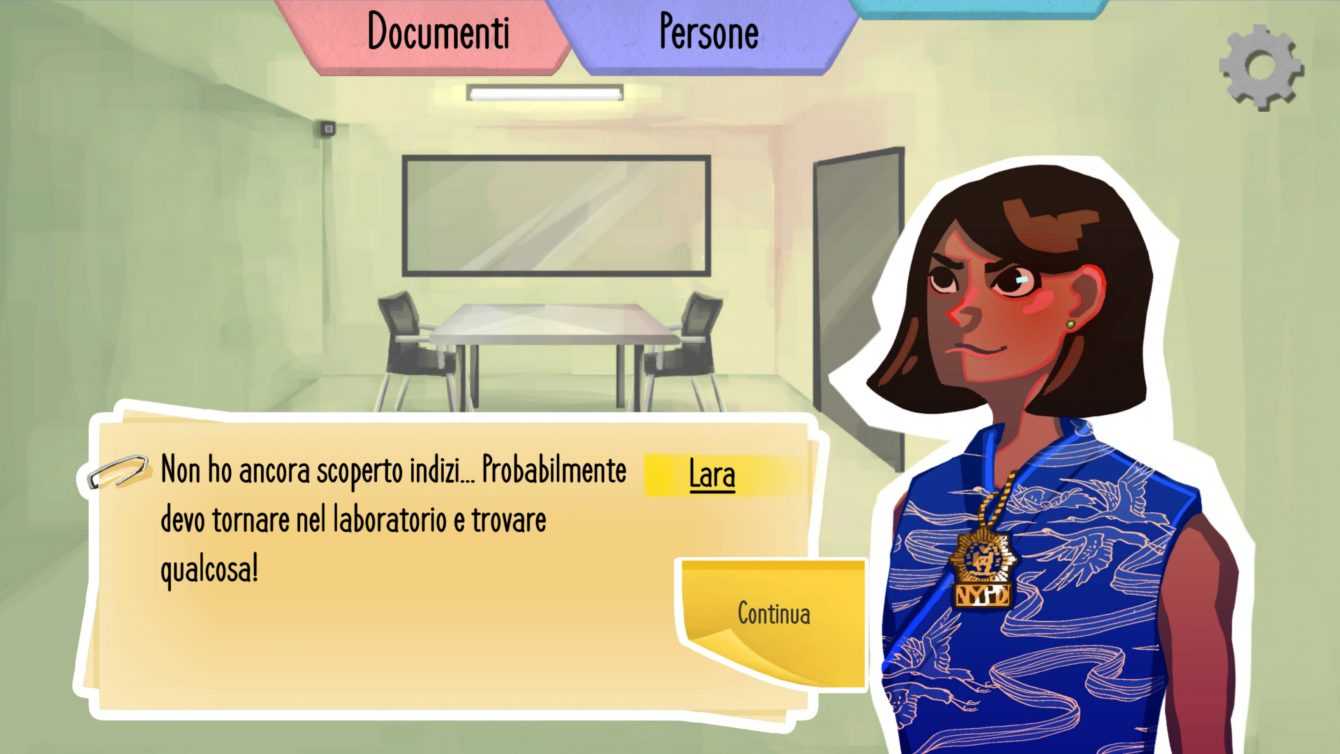 Mark & Lara: Partners In Justice ha several imperfections but, also thanks to his extremely low price, it is still a valid choice for those looking for a cooperative game. The title has a very short duration (about 2 hours) and consequently it is perfect to be completed in one session. Plus you can play it when and where you want, since it does not require an internet connection and is available on many different devices. Despite the issues we told you about during our review, Mark & ​​Lara: Partners In Justice remains a good game suitable for those looking for a fun way to spend an afternoon with a friend.

Mark & Lara: Partners In Justice è available now for PC and Android devices. If you are interested in staying up to date with all the news on the world of video games and much more, then continue to follow us here on TechGameWorld.com. Furthermore, in case you want to buy some games at an advantageous price, we suggest you take a look at the many offers on Instant Gaming.

A good way to spend an afternoon