In this review we will tell you in detail about Monster Hunter Stories 2: Wings of Ruin, Capcom’s new turn-based JRPG

Monster Hunter Stories is one spinoff of Monster Hunter which is very different from the main series of Capcom. In fact, the focus of this title is breeding monsters and, as if that were not enough, it is flanked by a typical turn-based JRPG gameplay that fans of classic chapters are not at all used to.

It has been a while since the launch of the second chapter of this spinoff series and in this period we have had the opportunity to play it very thoroughly. Consequently in this review you will find one of ours detailed evaluation sul nuovo Monster Hunter Stories 2: Wings of Ruin.

The strength of the bonds

Since we have already dealt with it extensively in ours preview, in this review we will not dwell on history Monster Hunter Stories 2. We’ve already said everything there was to say about the game’s incipit and consequently we prefer to avoid repeating ourselves.

Now that we have tried the title in its entirety, however, we are finally able to make a complete judgment on the story. Initially the plot of Monster Hunter Stories 2: Wings of Ruin seemed promising to us and now we can say that our expectations were largely met. In the course of the game the story it will take an increasingly interesting turn and, apart from a few drops in the middle of the adventure, the narrative will keep gods really good rhythms. Plus, all the characters you meet will really be well characterized and you will end up getting attached to each of them immediately. In short, overall we really enjoyed the story of the game, especially when compared to that of the main chapters of Monster Hunter. 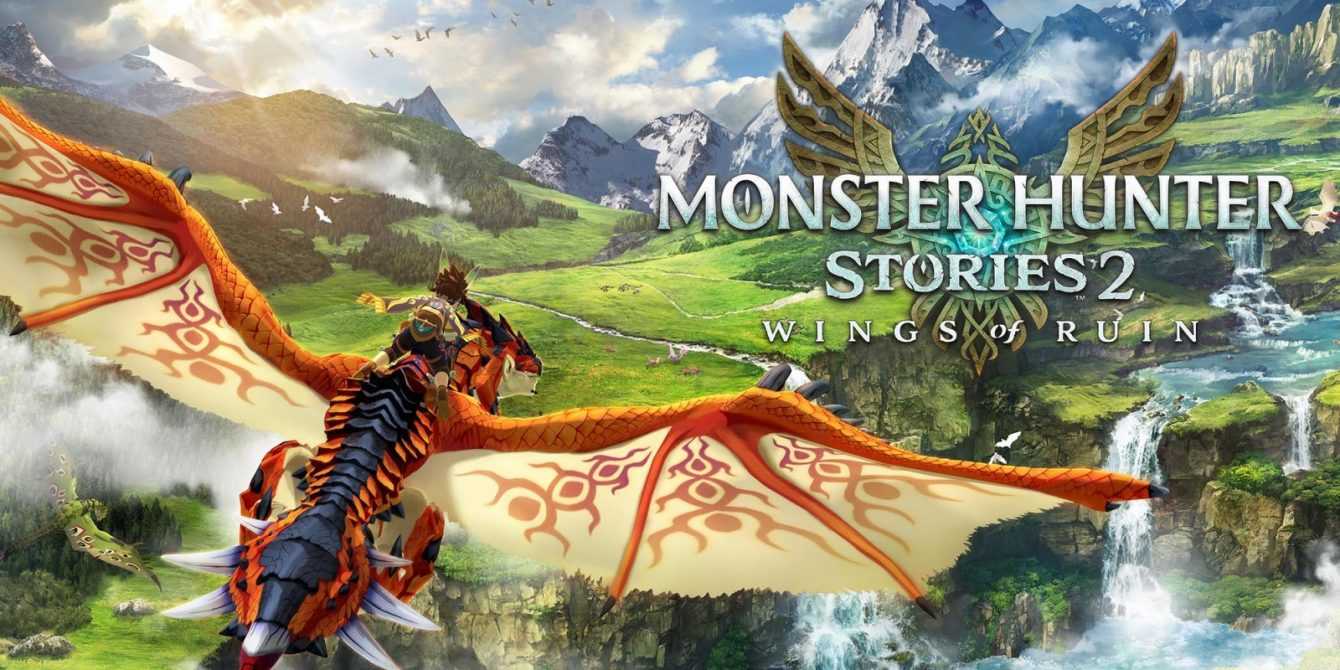 Catch Them All – Monster Hunter Stories 2: Wings of Ruin review

In nature monsters are extremely aggressive towards humans, but raiders still manage to create a strong bond with them. To do this you need to start raise your companions from the very beginning and for this reason your protagonist will be constantly looking for egg.

You won’t initially have many opportunities to grow your squad, but once you get through the introduction you will have the option to explore a large number of many of monster. These places are small randomly generated dungeons full of enemies, treasures and most of all eggs. Of course the monsters won’t let you take their young easily and as a result you will often be forced to fight. Fortunately, however, these creatures will not always be cowards and sometimes you may be able to stealing the eggs by stealth when they are not in the nest or while they are sleeping.

Unfortunately, however, even if there are no dangers, the collection will not be easy at all. This is because every time you interact with the egg stack you can get one randomly but, since they are all very similar to each other, it will be very difficult to understand which one to take out of the den. To find out which monster they belong to you will be enough learn to recognize the colors and symbols of the shell, but understanding the actual potential of the puppy hiding inside will be much more complex. Fortunately, you can always count on the help of your companion felyne Navirou, who will evaluate the eggs based on smell and weight. The heavier an egg is and the stronger it smells, the more powerful the creature within it will be.

Because of this random component, you will often find yourself having to farm eggs to try to get the best possible version of a monster. This process is very repetitive and can be boring due to the structure of the dungeons. In fact, the nests of the monsters will almost always be very similar to each other and extremely linear, so you will soon end up losing interest in exploring them thoroughly. 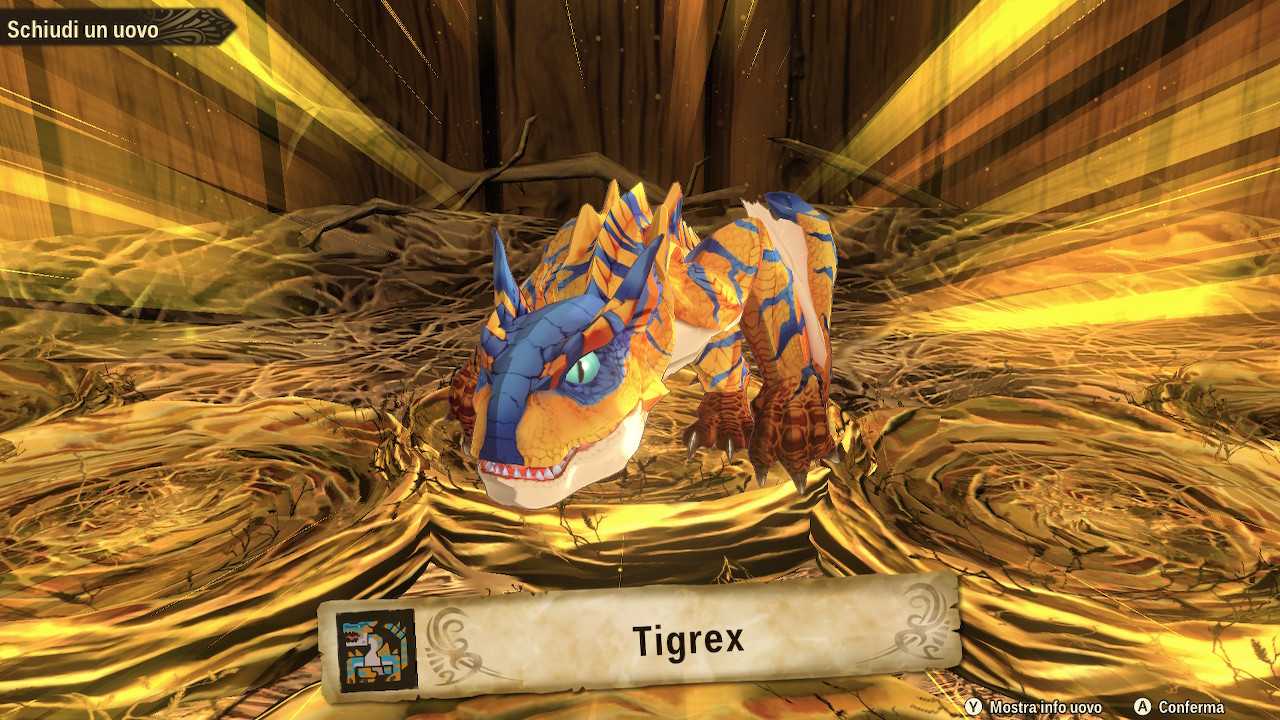 When an egg hatches, the monster that comes out will be randomly assigned genes based on the rarity of the egg. These genes are nothing but gods passive or active skills that your companions will be able to take advantage of both in combat and during exploration. In total each monster has 9 slot where you can place these power-ups which, if aligned in a precise order, will have even greater effects. Not all housings will be available right away, but some will need to be unlocked by leveling up your monster or by using certain items.

Despite the presence of 9 slots, basic players will not have the ability to freely move genes as they prefer. In fact, to be able to correctly align the upgrades you will be forced to rely on Shamanic Rituals. This mechanic will allow you to transfer genes from one monster to another, however, losing the donor forever.

The Shamanic Ritual is essential to be able to make your companions competitive, as it will allow you to enhance the skills he already has and replace those he doesn’t need. Also, since the two creatures that undergo the ritual don’t have to be of the same species, you can also teach your monsters skills they would normally never learn in nature. For example, you could create amphibians that breathe fire or flying dragons that throw rocks. Experimenting with the Shamanic Ritual it’s really a lot of fun and will allow you to really customize all your companions. 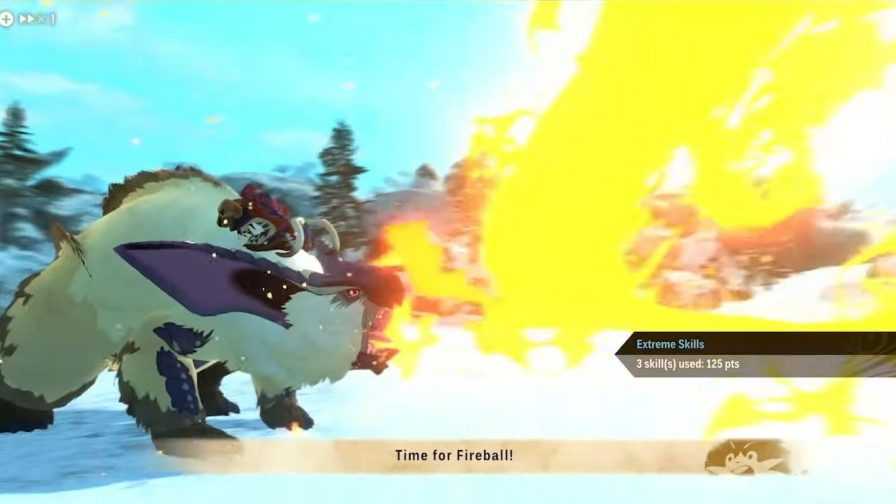 The fights of Monster Hunter Stories 2 are very similar to those of a classic turn-based JRPG. Once you have approached an enemy the battle will begin and both your protagonist and the first monster on your team (made up of max 6 creature) will take to the field to fight. Also, in case you are traveling with another raider, he and his partner will also fight alongside you. During the fight you you can directly control only your protagonist, but fortunately the actions that your allies are about to perform will be indicated on the screen.

Monster Hunter Stories 2, however, has a particularity that distinguishes it from other titles of the same genre: the combat system. In fact, in the game almost all the moves are available in three variations: power, technique and speed. These “attributes”Can be easily associated with rock, paper and scissors from Chinese morra, as each of them will have an advantage or a disadvantage in a fight with the other two.

Whenever you attack an enemy that is also targeting you, a head to head and, depending on the attribute selected by both, you can win, lose or draw. In case of victory you will inflict greater damage and you will suffer less, while in case of defeat it will be the opposite. In addition, in case your monster companion attacks the target of the head-to-head using your same attribute, you can unleash a very powerful double attack capable of inflicting tremendous damage e cancel the opponent’s move.

Damaging enemies and especially winning head-to-head will also allow you to fill your bond bar. This indicator allows you to execute powerful skills and issue some orders to companions, but most of all will allow you once full of ride monsters. As soon as you get on the saddle, both you and your mount you will recover a large number of HP and later you can unleash one devastating bonding ability. Also, should your fellow Raider do the same thing, you can even activate a double bond attack really powerful. 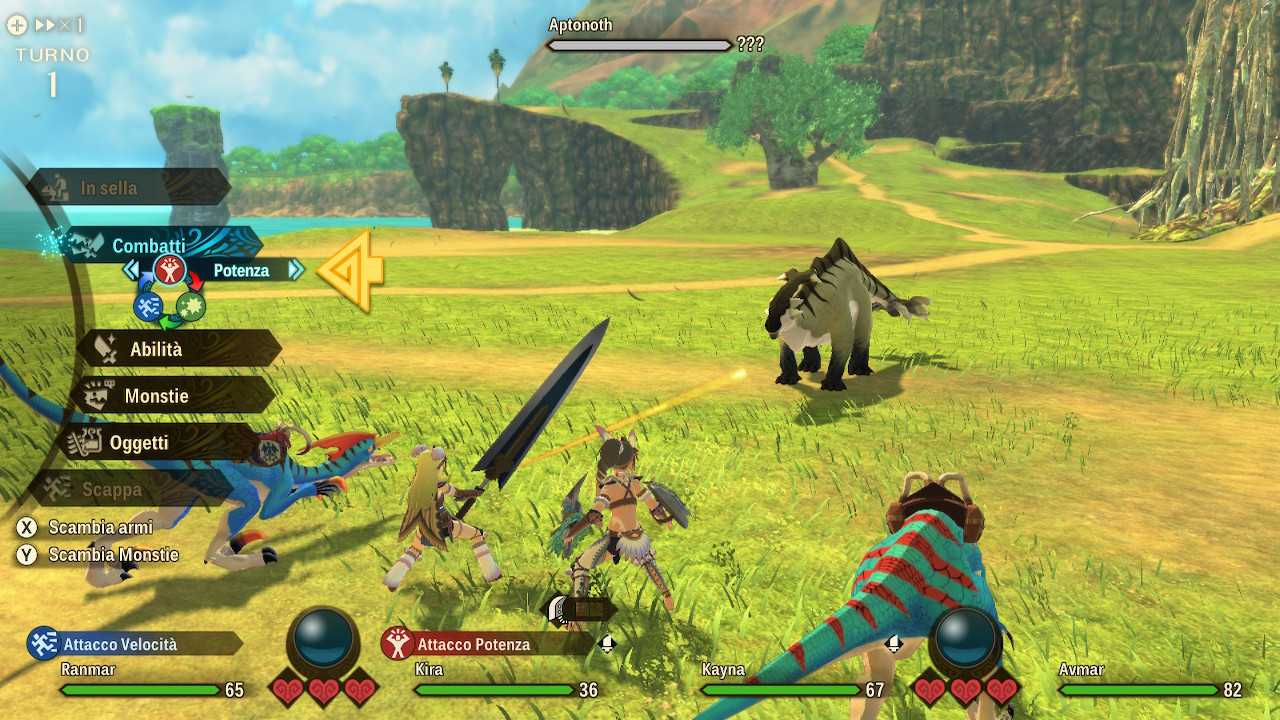 In addition to the particular mechanics of the Chinese morra, the fights of Monster Hunter Stories 2 feature many other very interesting elements. For example, your Raider can use weapons capable of inflicting cutting, blunt or piercing damage, and alternate them during the fight for exploit the weaknesses of the opponents. Also by facing some of the most powerful monsters you can decide to target specific parts of their body. In fact, by destroying them you can block some of their attacks or even stun them.

In addition, during the fights, the consumable items. In fact, in addition to the classic treatments you can use explosives, blinding bombs, traps, throwing knives and many other useful tools. These items are typical of the Monster Hunter series and in many cases will have e’seffects extremely similar to those of the main chapters of the brand. Thanks to all these tactical possibilities, during the battles you will have the possibility to use many different approaches.

Since the main fights are quite simple you will often not be forced to use all these options, but the subject changes for the secondary schools. Monster Hunter Stories 2 indeed really presents lots of optional activities which very often represent real challenges which require careful preparation. Sometimes you will have to try to finish fights within a certain number of turns, while in other cases you will simply have to beat monsters that are much more powerful than normal.

In addition to the side missions, another very fun and challenging activity is fight against other Raiders. In fact, in Monster Hunter Stories 2 you will be able to cooperate with other players to overcome the most difficult battles, but also challenge them in extremely complex battles with unique rules. This competitive component is really a lot of fun and significantly increases the longevity of a title that is already extremely long-lasting. 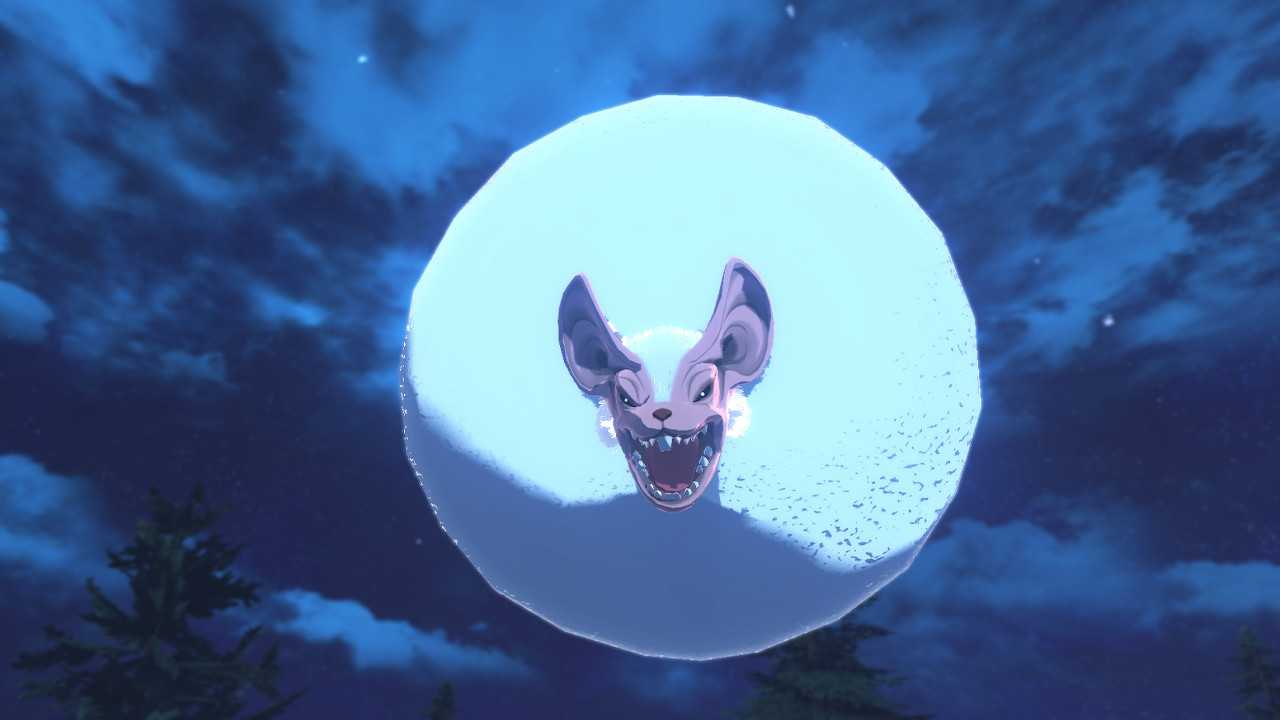 During our review we told you about how important egg farming is in Monster Hunter Stories 2, but there are also many other items that you will need to accumulate. By exploring the various areas of the game you will have the opportunity to collect a large number of materials that you can use in different ways. For example natural resources such as honey, mushrooms and herbs can be combined for create healing items, while minerals and monster parts will be key for forge and upgrade both your Raider’s weapons and armor.

The maps will also feature numerous deposits of rare materials and forzieri containing very useful treasures. These items, however, will generally be hidden in hard-to-reach places and this is where your companions come into play. In fact, many monsters have special abilities that you can use outside of fights for reach places otherwise inaccessible. For example, some creatures can tunnel, others are able to swim, and still others can fly.

Using your companions’ unique abilities to explore is a lot of fun, but sadly the game will not take full advantage of this feature. Most areas in fact …