That smart is changing very fast is certainly not a secret. The Swiss-German House was in fact the first Thermal home to become 100% electric, in 2020. And today we can finally see the first car of the new smart generation, Concept # 1. This prototype electric SUV compact on the outside but spacious on the outside condenses over 20 years of smart history into a new format, more modern and totally electric. So let’s see what lies behind the original lines of smart Concept # 1.

The aesthetics of smart Concept # 1: immediately recognizable as smart, it combines old and new (and many Mercedes treats)

Being a concept car, or rather of a prototype not yet ready to be put on the road, the technical details are few, and the aesthetics are certainly very extreme and personal. From here, however, Gorden Wagener, the Chief Design Officer of the Daimler Group, told us that we can already see the future of the smart brand. “The new Concept # 1 is a redefinition of the brand and of the smart stylistic code in a cooler and more mature way: smart Concept # 1 is the first smart of the new era ”, and not just because it is the first built in collaboration with the Chinese company Geely, owner of the half of smart, on a par with Mercedes-Benz.

The aesthetics of smart Concept # 1 are in fact immediately recognizable as smart for the front mouth, taken from the current electric fortwo and forfour, the contrasting roof that mentions the Tridion safety cell, a smart trademark since 1998, and a high, stubby tail. Thanks to the platform designed from the outset to be electric, then, the front and rear overhangs are minimal, in pure smar stylet. But it is also a totally different car than any other smart ever seen on the market. The dimensions, of course, are from… normal car: we are talking about 4.23 meters long. The width, in reality, is really generous, from 1.91 meters, as well as the height, of 1 meter and 70. 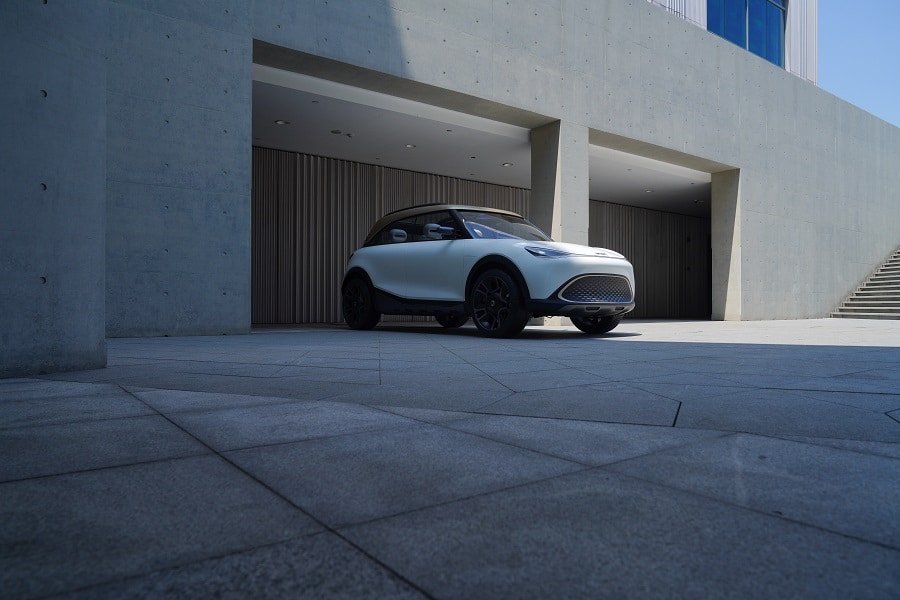 We are almost 50 cm longer than the first smart forfour, still today the “biggest” smart ever produced. THE circles then they are very large, from ben 21″, and together with the plastic wheel arches and a high waistline give the car a very aggressive look, different from what we are used to. To this look are added the windshield pillars painted in silver, which have a bit of a “floating roof” effect. 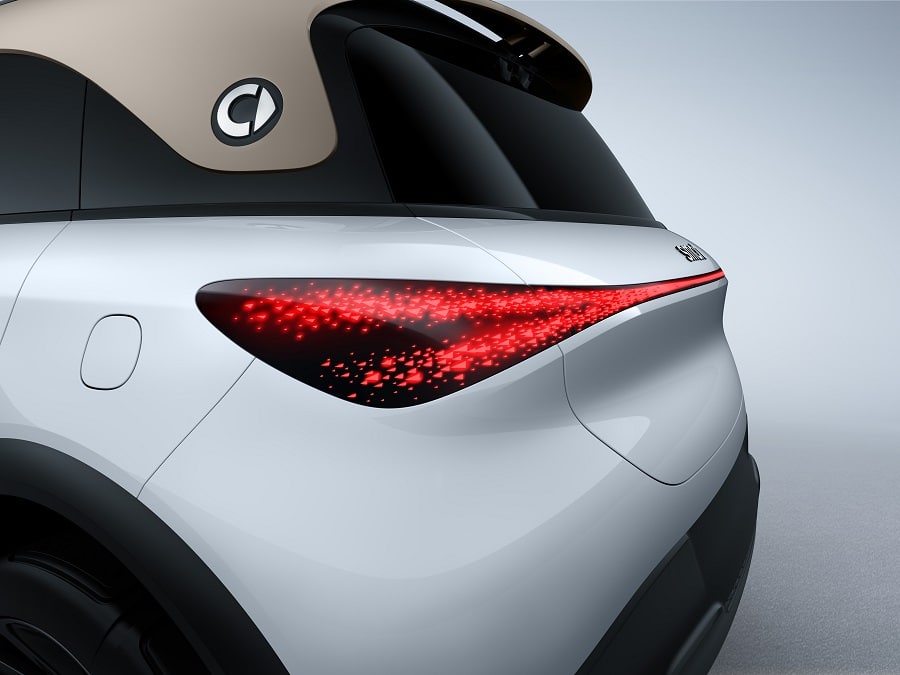 The front and rear LED headlights, both joined by a thin strip of light. Here you can clearly see the hand of Mercedes, that has brought back the typical styles of the electric cars of the EQ range also on the small smart Concept # 1. On smart, however, the headlights are a bit more playful and whimsical: at the ends, for example, they give the impression of dissolve. The LED light breaks into many small triangles, which give, according to the smart designers, an effect similar to fireworks. 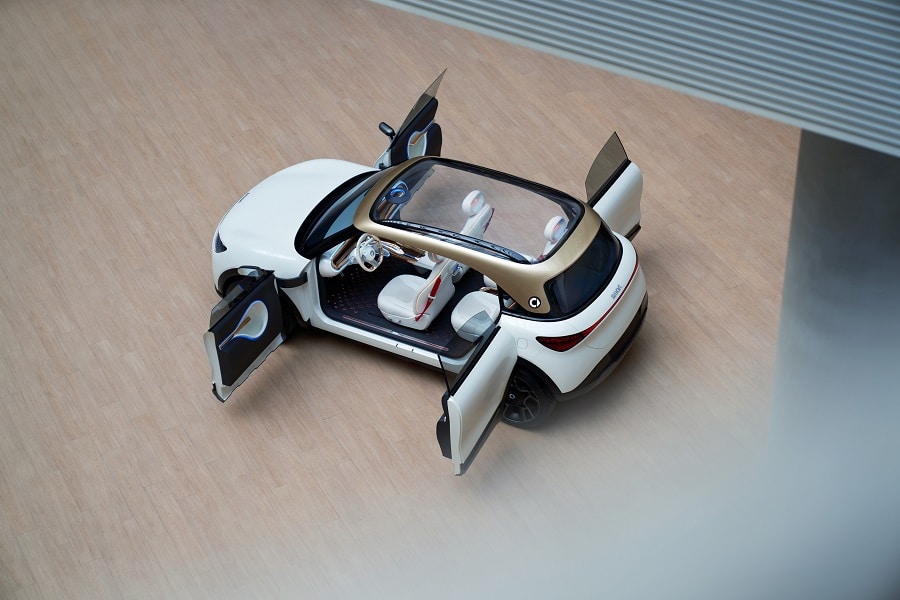 Finally, the show is also the doorman. Without frame, as per tradition on the smart fortwo, the four doors have thewardrobe opening. The rear doors are in fact hinged behind, and reveal a completely free opening. In fact, the central B pillar is missing, and the opening that is formed is really wide and scenographic. Last note on handles, totally absent. On smart Concept # 1 the password is in fact digitization, which begins as soon as you get into the car. The handles are in fact not physical, but touch: they are only indicated by a beam of light on the door, which indicates where to touch to open the car.

The interior of smart Concept # 1, minimal and technological: Mercedes influence, a large tablet and lots of light

If out smart Concept # 1 confirms the stylistic traits typical of the German (indeed, now Sino-German) company, inside there are new styles to bring to the production model, a lot of technology and, looking sharp, many references to the world of Mercedes. Let’s start with the real protagonist, the party piece of the interior, the all-glass roof called Halo Roof. Already on the first MCC smart, the first series from 1998, you could opt for a glass roof which gave so much light to the passenger compartment. Here, however, we are at a higher level, with a full glass roof that runs from the windshield to the rear window. 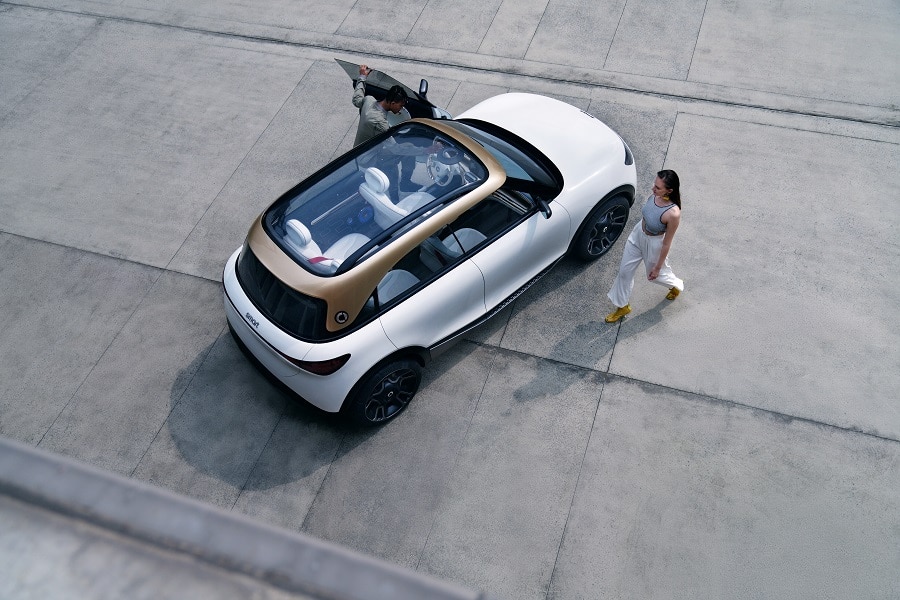 But the light also comes from lots of scattered light strips between the seats, the dashboard, the air vents, the doors, the floor and even on the glass roof. These bright parts are also capable of go to the music, connected with the Beats audio system inside. For the rest, the internal environment is extremely minimal and clean, as if to create a small personal lounge. The prototype has a 4-seat configuration, but smart has already communicated that the standard version will have the classic 5 seats. Who knows, however, that the 4-seater version may find the way to reality, somehow. 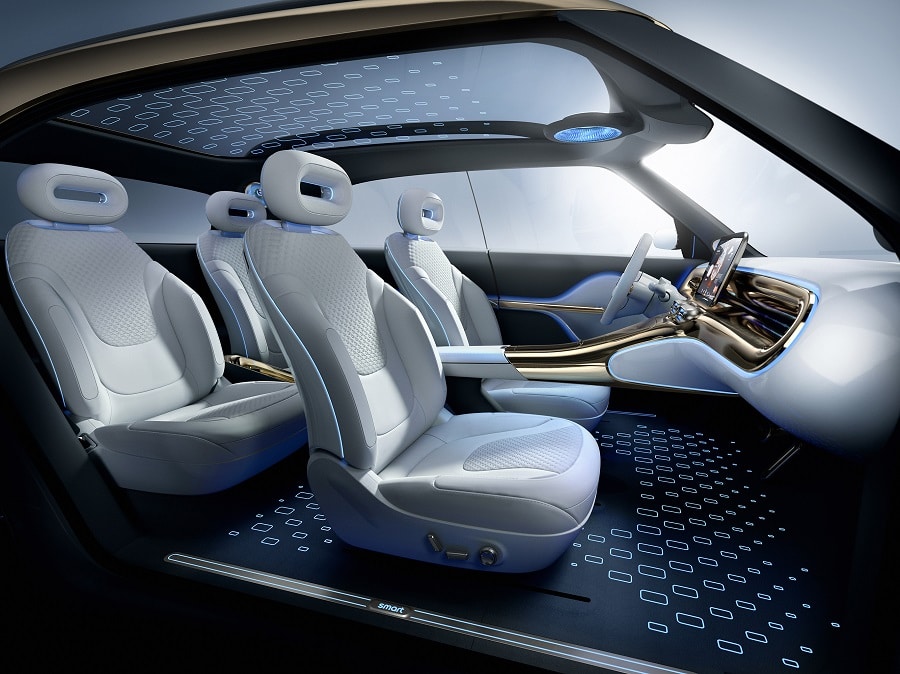 We will therefore not see the long central tunnel that divides the 4 seats, nor the individual seats, nor probably the gold finish of the tunnel and dashboard. We will most likely see the arrangement of the storage compartments, the steering wheel and the climate vents, all three solutions clearly inspired by Mercedes-Benz. In addition to these touches of class with the Star, however, the interior environment dominates presence of a single, huge touch screen for infotainment. Measure 12.8 inch, and it is the only way to interact with the car. In fact, a classic instrument panel is missing: everything should be left to the central cantilever touch.

And around him, therefore, all the car’s functions will be concentrated, from consulting maps, music and entertainment to information on instant speed, position of the gear selector and so on. The screen then has another surprise inside, namely the debut of the new and unprecedented UIUX operating system. This system was developed in parallel with the new and highly popular MBUX from Mercedes-Benz. From this it takes some aesthetic and functional details, such as the fixed position of the climate controls at the bottom, but it differs almost completely at the level of interface and operating system. 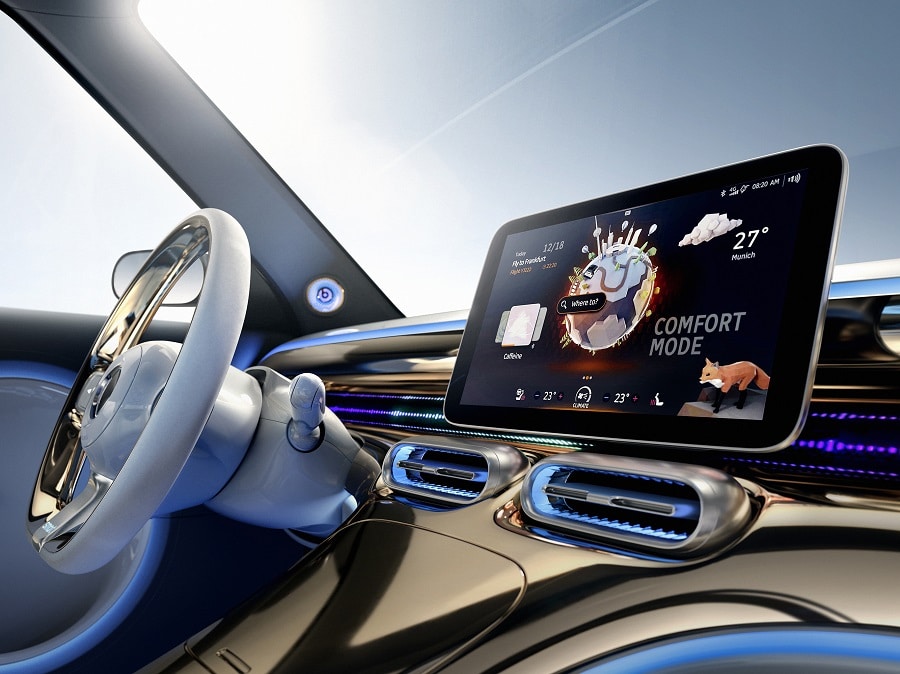 The UIUX is in fact very colorful, user-friendly, easy and almost cartoonish. To help the driver, in addition to the voice assistant we also have aartificial intelligence who learns our way of speaking, the most common functions and our routine to be customized right on us. More, There are no menus to navigate the options, but a huge 3D globe, to rotate to select what we were looking for, such as navigation or music. There is also a companion app for the smartphone, which will serve not only as a digital key but will be able to give access to various related services and functions. 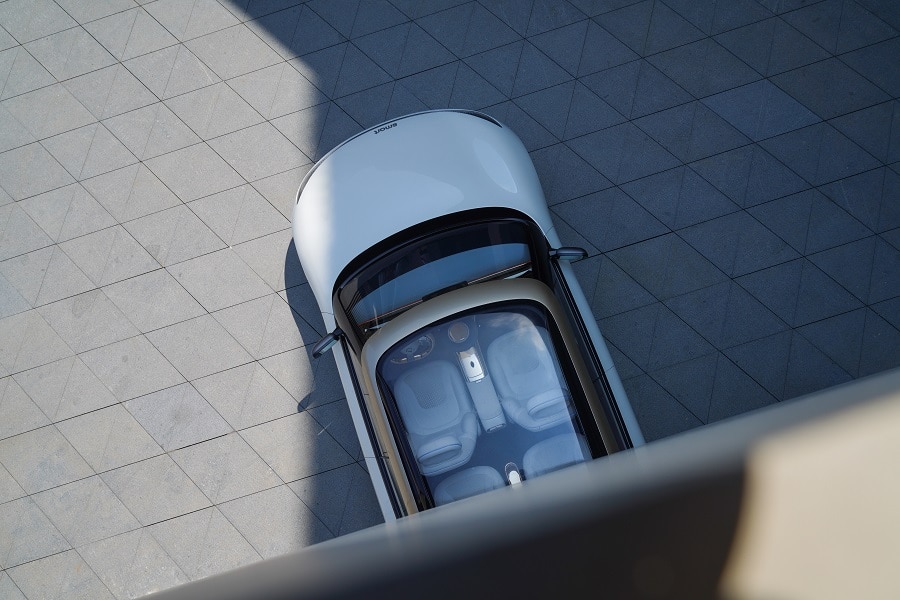 On a mechanical and technical level, the innovations have been well hidden. We know the car was built and developed on a platform totally dedicated to electric cars. The same smart, in the past, had then revealed that it was the SEA platform of the Geely Group, already used on other electric of the Chinese giant. We have no information on the quantity and power of the engines, nor on the technology of batteries and recharging. The smart leaders, however, spoke of a ‘autonomy of about 435 km in the mixed WLTP cycle, an excellent result on paper. Finally, the digitization that is the mantra of this smart Concept # 1 can also be seen for one last innovation. 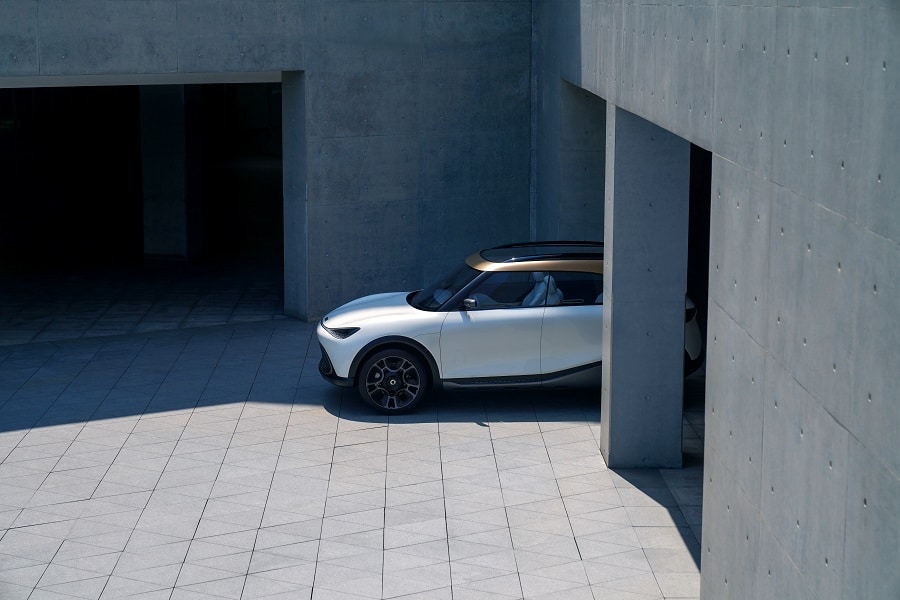 The new smart model has indeed a Huge power central control unit that greatly simplifies the car control electronics. Instead of having many control units, in fact, smart Concept # 1 has only one central control computer, which alone controls i four main components: infotainment, driving safety systems, specific functions on electromobility (such as recharging, searching for columns, …) and the last one that monitors the engine, transmission and batteries. Thanks to this centrality and the power of the OTA update system, virtually every component and aspect of the car can be remotely upgraded. For example, up to 75% of all engine control units can be upgraded remotely.

Finally, smart has always focused a lot on safety. To convince the public that their cars were exceptionally safe, albeit tiny, the company invested heavily in its Tridion safety cell, which has become a smart trademark. Therefore, even Concept # 1 focuses so much on safety, passive but above all active. In fact, as standard there will be parking assistant, highway driving, lane crossing and an “evasive automatic steering” system. According to smart, Concept # 1 will be at the top of its category for active and passive safety.

When will smart Concept # 1 arrive on the market?

And when will the electric SUV category see the debut of a smart SUV? Certain data have not been disclosed here, but the rumors speak of a launch expected in 2022. We will therefore not have to wait more than a year to see smart Concept # 1 in its final form. The technical and technological contents seem to be really interesting. Obviously, the great curiosity remains to discover the mechanical and electrical part, especially on power and autonomy.

In any case, however, the smart electric SUV amazed us. Sporty, elegant and capable of evolving the smart style without looking too toy, thanks to the positioning of the brand and the appeal that the smart brand still has it might surprise all zero-emission rivals. Everything will be in the aesthetics of the final product, especially inside, and in the price, which in smart has never been as small as their cars. However, in our opinion, the potential to do well is all there. And you? What do you think? Do you like this new smart model so different from what we are used to? Or do you still prefer the good old fortwo? Let us know in the comments: it’s your time.

Don’t miss the latest news from the Daimler-Mercedes world!