After years of silence, CVT changes and a push towards electrification, Subaru is returning to have gods emotional models in range. After the new FAST, more powerful and modern, another beloved model surprisingly returns, Subaru WRX. The 2022 version sports a new floor, a 275 bhp 2.4 turbo e manual transmission, but as for the coupe cousin his arrival in Europe is unlikely, unlikely. However, let’s find out what this new WRX hides, returning after more than 2 years of absence.

The history of the Subaru Impreza WRX: from rally icon to idol of young sportsmen

Reading the history of the Subaru WRX, I realized that perhaps the youngest among you do not have well in mind the role that this model covered between the 90s and the 00s. To understand what those three letters WRX mean, let’s take a very short excursus. In 1992 Subaru launched a new compact model, the Impreza. Despite being smaller than the Legacy sedan, the Impreza doesn’t give up on the two pillars of the Pleiades brand: the boxer engine and permanent symmetrical all-wheel drive.

These two characteristics also make the less powerful versions of the Impreza very pleasant to drive, and with extremely effective road holding on difficult surfaces. In addition, Subaru already equipped the larger Legacy with a 2.0 turbo boxer, and used it in the World Rally Championship against the more agile Toyota Celica and Lancia Delta. For this reason, at the launch of the new sedan, Subaru immediately launched a sports version, the WRX: World Rally Experimental. Available since the launch of the 1992, the Impreza WRX with its 218 hp was a real big-killer. And in rallies, the Subaru Impreza WRX 555 (name derived from the brand of cigarettes that sponsored it) immediately proved to be very competitive. 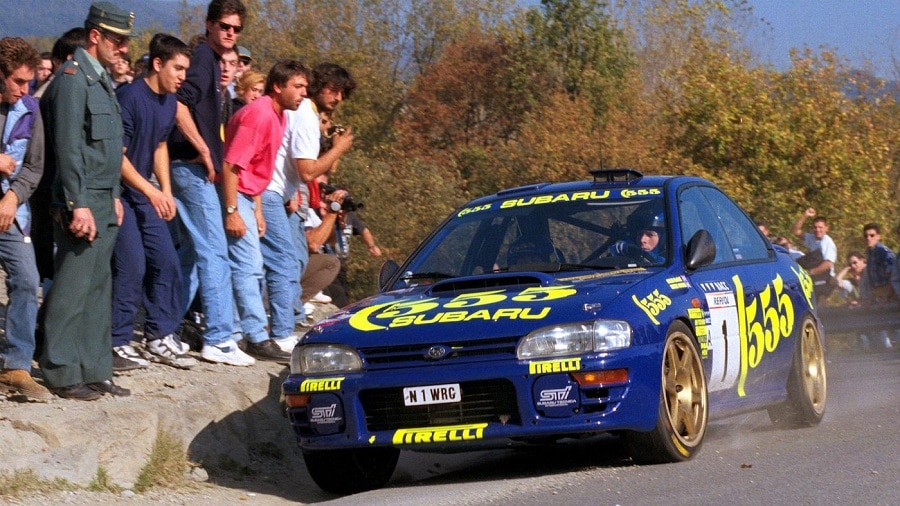 From the WRX 555, from the subsequent legendary WRX 22B and from the WRX STI WRC of the early ’00s, Subaru obtained 3 Drivers ‘World Championships and 3 Rally Constructors’ World Championships between 1995 and 2003. And on the road, the Subaru Impreza WRX and WRX STI were much loved and sought after by enthusiasts. Thanks to their power, the versatility of the sedan or Wagon bodywork and the ease of driving at the limit, they have earned a place in the hearts of enthusiasts all over the world. Over the years, however, the passion has slowly faded. Younger rivals were increasingly fierce, and the Subaru WRX STI, orphaned of the Impreza name, said goodbye at the end of 2019.

The return of Subaru WRX, 2 years after the farewell: a more mature but still sporty aesthetic

Two years ago we were sure that we would never see another Subaru sports sedan again. You want for the Subaru brand’s drift towards electrification, or for the prevailing trend of SUVs, another WRX seemed almost impossible. But if in Europe it might seem that the Subaru brand is not that popular, in America the whole Japanese are very popular. Between the Outback and Forester models and the evergreen XV (known overseas as Crosstrek), Subaru has continued to grow. And in 2019, with the launch of the highly anticipated medium SUV Ascent, the House of the Pleiades has won more and more hearts. And you know, a successful company also allows for particular, exciting models that make people talk about themselves. Thus, in 2022 the new Subaru WRX will arrive. 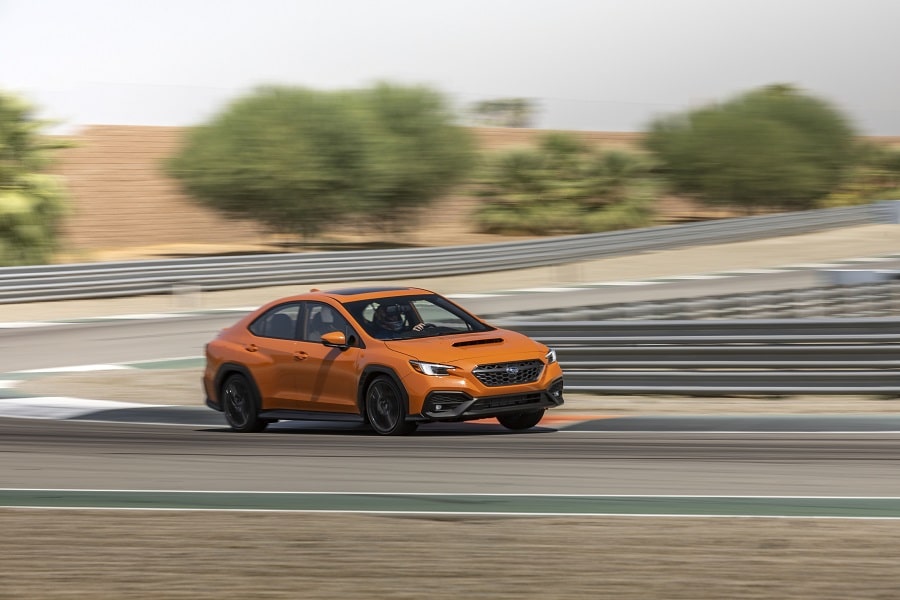 It definitively loses the name Impreza, which has already disappeared in recent years, and is defined by the House “The rally legend for the new generations”. Considering that there are no longer any historical rivals on the market, there is no doubt about this. But the aesthetics? From the outside, the second generation Subaru WRX is more polite of the previous view on the Italian market, but we must not forget a fundamental detail. In fact, in Europe, with a few exceptions, we only received the STI version, the Subaru Tecnica International, the most extreme and sporty both technically and aesthetically, with huge rear wing, golden wheels and Blue Mica paint.. This time, we are facing the “only” WRX. In Italy this version has been missing for several years. We last saw it on the 2008 Impreza hatchback, but for sedans we stopped in 2007. 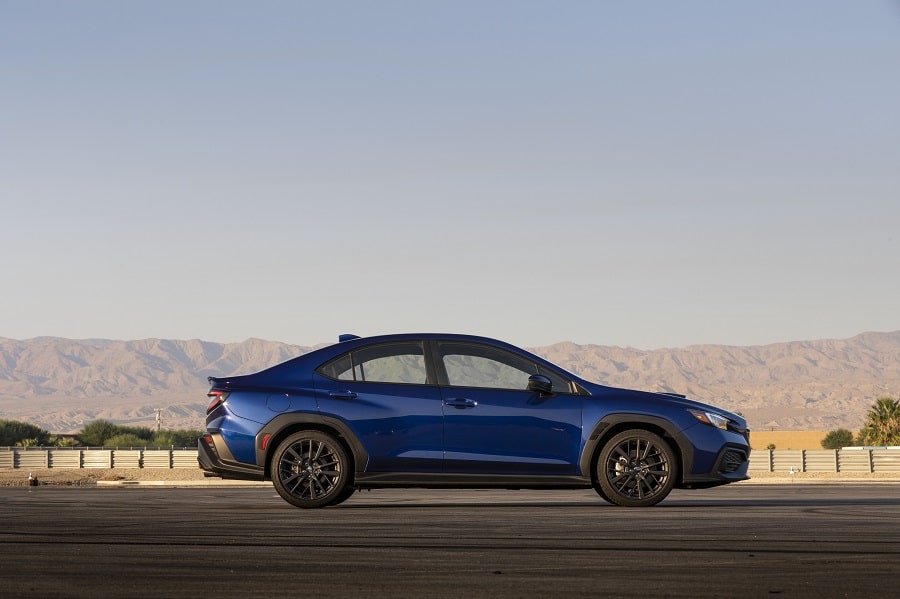 For those who do not remember, in fact, not surprisingly, the absence of gold rims and huge ailerons: the WRX are more discreet, but still sporty. The front is the same seen on the latest Subaru: pointed, equipped with a very wide trapezoidal grille, and with thin headlights and, of course, full LED. Then there is theinevitable air intake on the hood, the trademark of every Subaru with a turbocharged engine. The hood is long and very low, as per Subaru tradition, and laterally the lines are those of a peaceful medium sedan. However, the large (but not huge) alloy wheels, and the small lip on the tailgate. Going back then you can see the very widened and rounded bumpers, really sporty. The kit widebody (wide body, ed) is standard for the WRX, and gives it so much more nastiness. 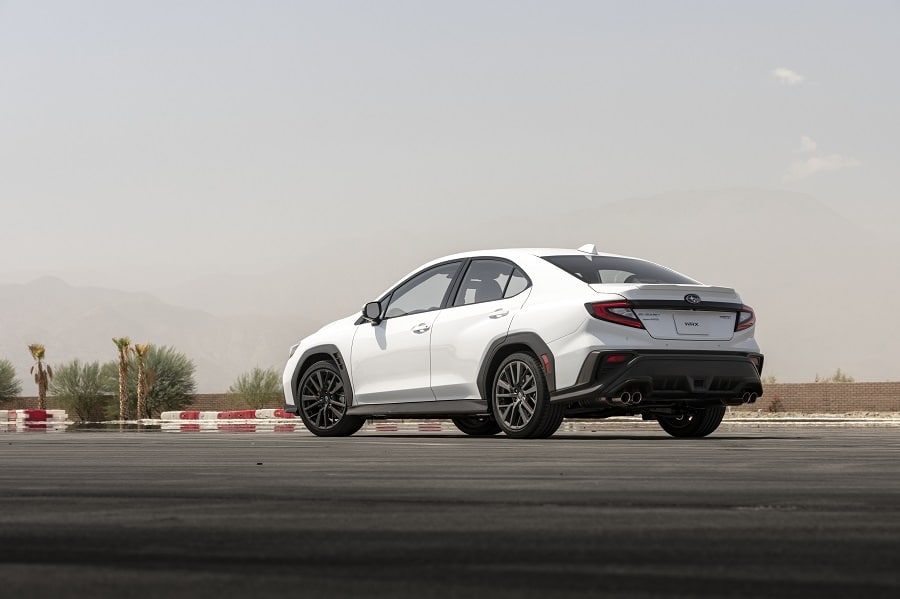 And right behind the Subaru WRX sports a look that we haven’t seen in Italy for several years. WRX indeed has a third volume quite pronounced, with full LED arrow headlights that reflect the look of the new BRZ. The diffuser and the (fake) air intakes in the lower part of the bumper are in black plastic, lightening the tail, and there are the beautiful 4 split exhaust pipes, the trademark of the latest Fast Subaru. In general, the tail is very traditional, recalling other compact hatchbacks with 3 volumes such as, for example, FIAT Tipo (this time for real). In general, the WRX touches just captivate a mature and practical sedan, making it sportier but without exaggerating. We like such a sleeper look, especially knowing what lies beneath. And you? What do you think of the look? Let us know in the comments.

Inside, Subaru WRX follows the latest trends from the House: vertical screen and lots of technology

One of the criticisms that has been leveled at the Subaru brand in Europe in recent years has been the adoption of slightly dated interior, with small screens and anachronistic separate fencing at the top of the dashboard. The House of the Pleiades has treasured these suggestions, completely revolutionizing the cockpit compared to the latest Subaru. From the old models comes only the general layout of the dashboard, with a vertical central part, the air vents on the side of the central body and a soft strip in front of the passenger. 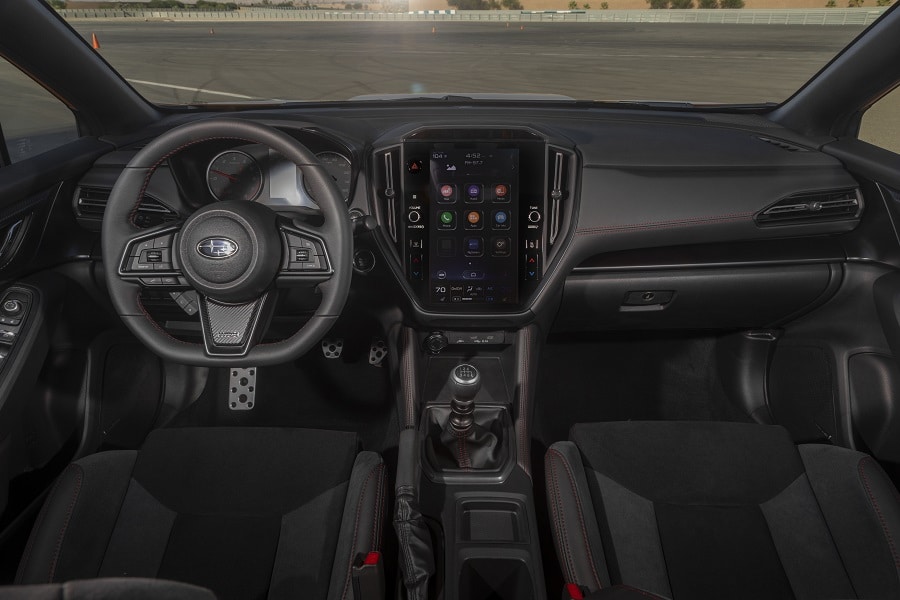 The steering wheel has also remained the same, and behind it we find a beautiful and traditional analogue instrument panel, with a small digital screen between speedometer and tachometer. The elephant in the room, or rather, in the cockpit, is however new 11.6-inch vertical touch screen. The panel has a Full HD resolution, and is the true nerve center of the car. Inside the operating system Starlink in fact, in addition to navigation and entertainment, there are also the car settings and the controls for the air conditioning system, automatic dual zone standard. A potential problem for those who are a lover of physical commands, but don’t worry. 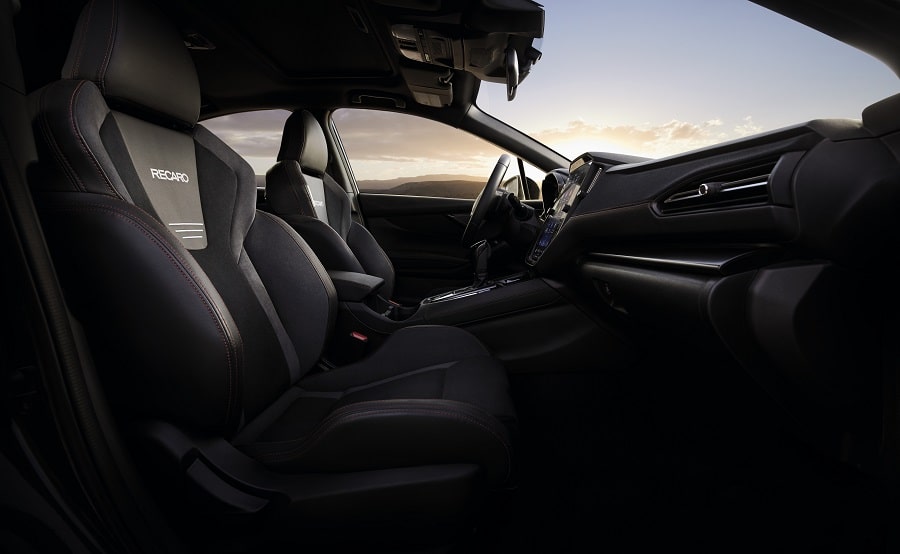 In fact, despite the presence of a huge screen, in Subaru they remain traditionalists: on the sides of the screen we find a glossy black finish that houses two knobs for volume and multimedia selections, and at the bottom the buttons for adjusting the temperature on the fly. But technology isn’t just about entertainment. The EyeSight system is standard on all Subaru WRXs with automatic transmission, which combines automatic emergency braking, adaptive cruise control with lane keeping and Automatic Emergency Steering. This system works in conjunction with the high-speed anti-collision braking system: WRX is able to improve steering to avoid an obstacle or an accident below 100 km / h faster.

The mechanics of Subaru WRX: 2.4 turbo with 275 hp, all-wheel drive and there is also manual

Finally, let’s talk briefly about technique, which does not need many preambles. The platform on which the new WRX is based is the Subaru Global Platform, shared with all models of the Japanese house. Like every Subaru apart from the sports BRZ (and some, rare cars made in collaboration with other manufacturers such as the unfortunate Justy and Trezia), the traction is Symmetrical AWD type. What does it mean? That the traction is integral on the 4 wheels, and always symmetrical between the right and left side of the car. There is also a Torque Vectoring system, and there have been some nice changes to the chassis. The new platform allowed the WRX to have the 28% more structural rigidity compared to the previous 2014 WRX, with the rigidity of the suspension attachment points increased by 75%. 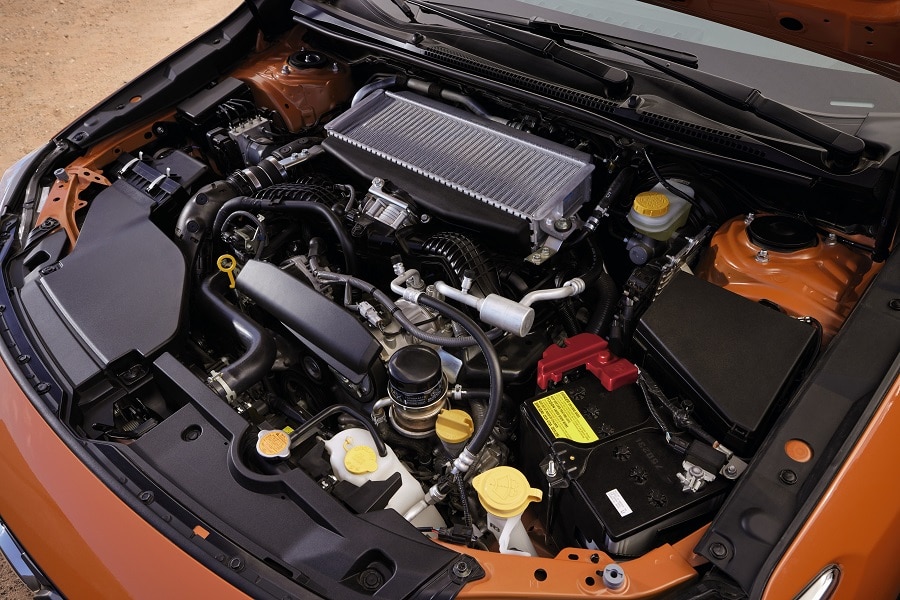 Also on a mechanical level there is a good news, with the adoption of a motor much bigger. It is in fact a 4-cylinder turbocharged boxer of 2.4 liters, well over the 2 liters of the previous one. The engine, then, is not the classic EJ, but is part of a new family, the FA, which we will also see (in aspirated version) on the BRZ and on the Toyota GR86. The engine here is obviously turbocharged, and it delivers well 275 hp and 375 Nm of torque. The change? Customers can choose from the now inevitable automatic transmission CVT Lineartronic, called for the occasion Subaru Performance Transmission, which has a “manual” mode with 8 simulated gears and shifts 50% faster. But rest assured: there will be a good one as standard 6-speed manual gearbox equipped with RevMatching, and change much faster. 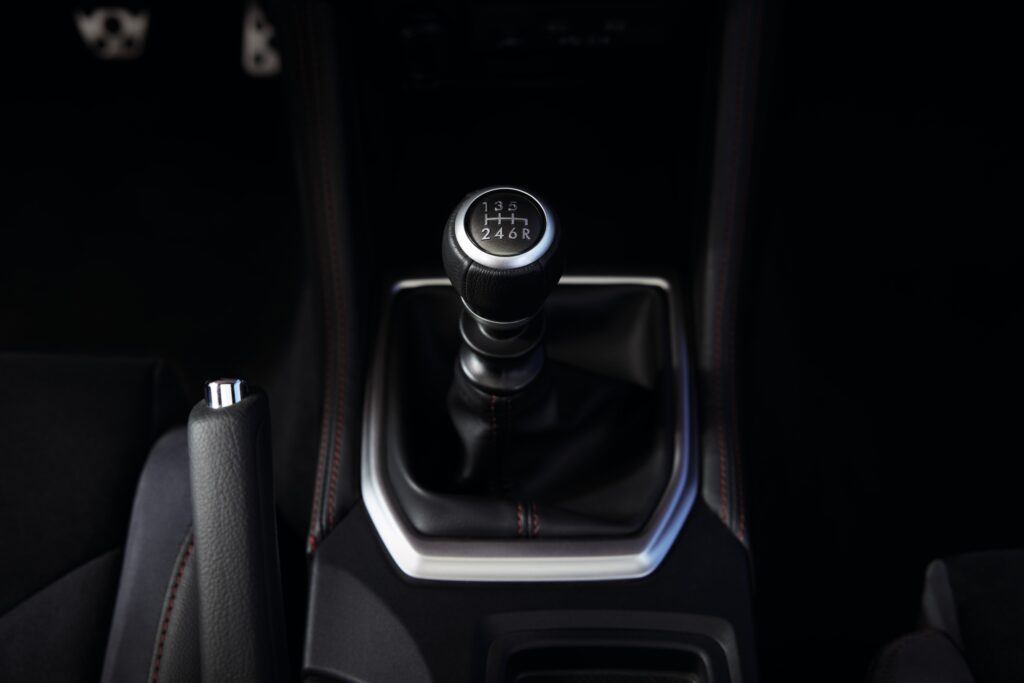 The wheels will be 17 on the basic version and 18 on the more complete GT, which also offers a great novelty: the electronically controlled suspension, featured for the first time on a Subaru. The performances have not yet been formalized, but we expect avery fast acceleration, with 0-100 km / h well under 5 seconds, and an ability to go fast both on dry and wet asphalt and, of course, on dirt and snow.

The new rally icon for young people. But will Subaru WRX ever arrive in Italy?

As anticipated before, there will be a new top-of-the-range set-up, the GT. It will be the top of the WRX range, which in addition to electronically controlled suspension will also offer a improved driving mode selector, which will give the driver over 430 customization options. In addition, in addition to the 18 ″ rims with 245/40 tires the beautiful ones will also be standard Recaro seats electrically adjustable. Finally, there will be a sistema audio Harman Kardon to 11 speakers and theEyeSight for automatic versions.

And when WRX arrives in …