WowCube it is a strange device that recalls the Rubik’s cube but which instead of the single colored squares has of small displays. It is in all respects one mini console which allows you to play by rotating the WowCube, shaking it and tilting it. The truly fascinating project was born five years ago by a 13-year-old boy and will be available to the public at the end of 2021.

WowCube, the smart mini console with 24 small screens (and a must have)

The mini console WowCube it’s like a Rubik’s cube with lots of displays. It is a simple but at the same time unique device: it is composed of 8 separate but interconnected modules. Each module is an independent device equipped with a CPU and three high resolution displays, for a total of 8 CPU e 24 display. Thanks to this it is possible run a video game on all screens at the same time, covering the six sides of the cube.

The project started five years ago, by a boy of then 13 who asked his father if it was possible to make a Rubik’s cube equipped with a display and that would run small games. The father, Ilya Osipov, he therefore decided to found the company Cubios to make the small console. The San Rafael, California-based company wanted to get out of the usual traditional game consoles and smartphones. He thus created a play device that can be rotated, shaken and twisted in the hands.

Ilya Osipov said in an interview with GamesBeat that she thought about her son’s idea for a few days and then called a patent attorney to do research on those inventions. Unable to find anything else, they proceeded with prototyping towards the end of 2016. They founded the company in April 2017 and in 2018 Ilya Osipov showed the prototypes at events and found enormous interest in the product. Thanks to this success, then, he managed to get gods financing which allowed us to develop the final version of WowCube.

This is a very unusual device, equipped with 24 screens and 8 microprocessors. The real challenge was to make this device affordable for the youth market: a cube with 3 × 3 squares on each side, like Rubik’s, would have cost too much.

The WowCube entertainment system has the shape of a cube made up of eight connected modules. The twenty-four high-resolution screens cover the cube, converting the six sides into a playing field. You can check the cube on each side rotating, tilting, touching and shaking it, just like with a Rubik’s cube. Patented magnetic connectors allow for a continuous flow of information between standalone modules, ensuring a seamless gaming experience. An integrated gyroscope (still in beta) supports a realistic response to player movements.

It offers a unique user experience: it allows you to interact with the digital world as if it were a real object. Cubios is working on more than 30 different games: arcade games, puzzles, logic and strategy games; playful educational apps and many more for gamers of all ages.

During this month the company will launch i pre-orders and will open the software development kit (SDK) to third party developers. WowCube will come with several games, such as Pipes, Scrabble, Space, Puzzle, and Maze. Up to 24 games can be loaded via theapp mobile WowCube Store and via Bluetooth connectivity. Zeptolab, the company behind the game Cut The Rope, is one of the companies that developed a game for this console. 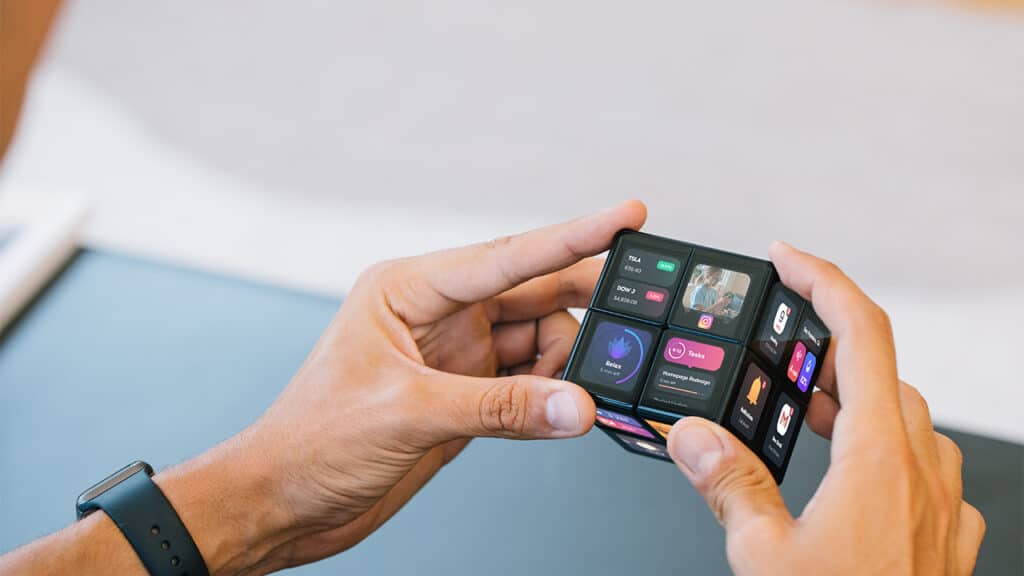 The amazing thing is that this cube isn’t just a handheld console, it is a real smart entertainment system. When it goes into screensaver mode it uses its many screens to show gods widget with notifications of the connected smartphone, such as messages, emails and the music player. It is also possible to view some information, such as the weather, stock prices and much more, or use it as a real design object thanks to some motifs that run on WowCube. And if you are an expert, you can develop anything you like for WowCube using the software development kit.

You can subscribe to the preorder page to receive a 40% discount than the original price once WowCube can be ordered. The cost of the mini console should be about $ 250.