The “Face to Face” tournament dedicated to Terry Bogard returns to ignite the Super Smash Bros. Ultimate weekend: this is what it stands out for

We promised ourselves, with the return of “Secret Identity”, not to deal with the events we have already talked about, but in the case of the tournament “Face to face”We are facing a rerun never seen before in our coverage of Super Smash Bros. Ultimate. After the roster welcomed both Ryu and his transoceanic equivalent Ken Masters, the arrival of Terry Bogard made it necessary to place an emphasis on representing characters taken from classic fighting games. Given the presence of Kazuya Mishima in the now complete cast, it is clear that it is worthwhile to dedicate a few words to the event.

In the face (to face) of the trivial tournament: Super Smash Bros. Ultimate turns red!

As you can see below, the in-game notification dedicated to “Face to Face” immediately shows what Super Smash Bros. Ultimate wants to emphasize. While there is no skimming on the roster, they are rules to arouse our attention more. The clashes will only be one versus one, you will play in Energy mode (with 200 life points) and with one life each. There will however be a time limit set on two and a half minutes, as well as the Final Smash bar will be active and there will be “Enough” tools, but all arenas will be in Ω version. In other words, therefore, we will collide on board a single flat platform. 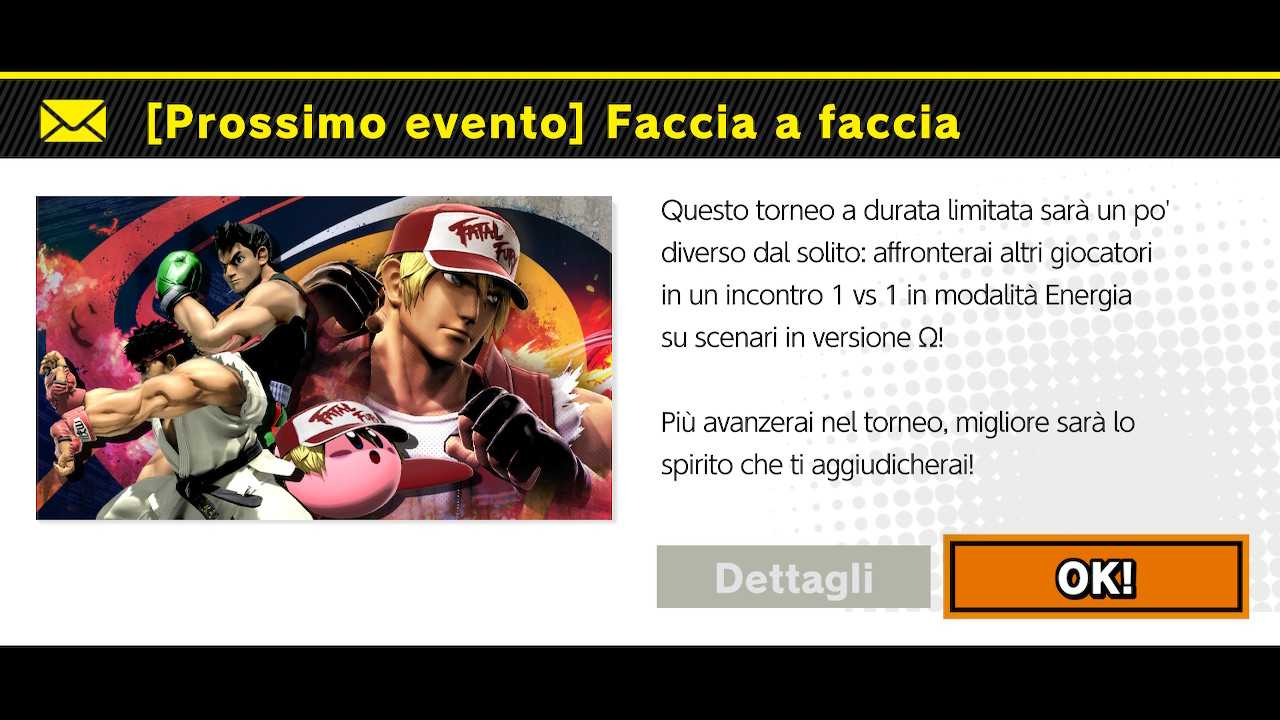 It will be an excellent opportunity to try your luck with Sora in the hope of being able to enjoy his special end-of-battle animation. Given our perhaps belated report of the event, you will have to wait very little before engaging in the clashes. The dances will open just tomorrow, Friday 4th February, at seven in the morning. You will have time to play until the same time as Monday 7. If you want to get to the event prepared, we gladly refer you to the summary of our comprehensive guide to the game. In addition to reviewing the various characters, we have also included some news in the appendix section.