The world of cars often seems simple, especially that of racing cars. In fact, in the various categories there is usually a winning project, stringent rules to follow and cars that, apart from aesthetic and mechanical differences, are very similar. However, this is not always the case: as in all areas, in fact, there is always someone who thinks outside the box. Welcome to Auto for Dummies, the column that tells you about the curiosities about the car world, and today we will talk about 6 strangest racing cars that have ever hit the asphalt of a circuit. Get ready: you will surely be amazed.

Let’s start immediately with a bang for a car that video game enthusiasts will certainly know, the Chaparral 2J from 1970. This car is in fact one of the fastest in the Gran Turismo franchise, present from Gran Turismo 4 to GT6. But what makes the Chaparral 2J so special? From his nickname it is easy to understand: “Vacuum Car”, the vacuum cleaner car. This strange car won the American Prototype Championship, the CanAm, using a technology as simple as it is discussed.

Let’s take a small step back first. Chaparral is a now defunct American company founded by the brilliant pilots and entrepreneurs Hap Sharp and Jim Hall, active between the 60s and the 80s. Although smaller than giants like Ford, Ferrari or McLaren, in Chaparral they followed the same principle as Colin Chapman’s Lotus. Which? Beat the huge rivals with unique technical solutions and anticipating the future of motorsport. In Chaparral, at the opening of the 1970s, they realized how theaerodynamics was starting to play an increasingly important role, and they decided to focus on aerodynamic grip too. But not like Ferrari and the like, or by mounting aerodynamic appendages, but working on theground effect of the underbody.

A project similar to the legendary Lotus 78 of Formula 1, which used the underbody and the “movable” side skirts to achieve perfect grip. However, if Lotus focused on the “natural” ground effect, in Chaparral they thought of a crazy solution. That is, to induce an “artificial” ground effect, a suction generated by a mechanical system. And in fact the Chaparral 2J is also famous as a “fan auto”. The bodywork was without ailerons or appendages, very simple: he just had to aim to cut through the air as best he could. What about adherence? It had been coming for a couple of huge fans, with a diameter of 43 cm, mounted at the rear. The 2J’s engine was a 7.3-liter aluminum Chevrolet Big Block V8 with an impressive 688 HP. The gearbox was also very strange: unlike the classic manual, in fact, Chaparral mounted an absurdity 3-speed automatic. 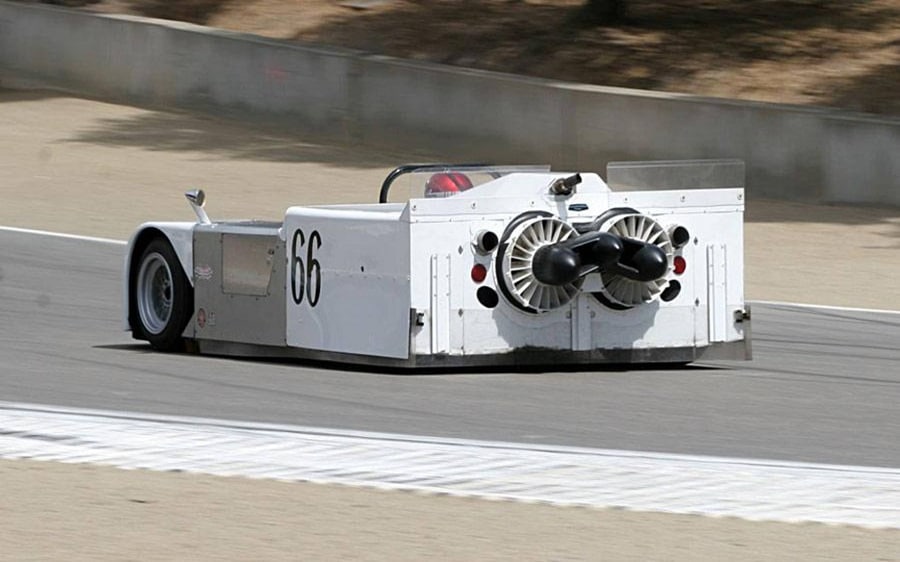 And it wasn’t the V8 that moved the fans, but a two-stroke engine of a 45hp snowmobile dedicated only to the air suction system.. These were able to attack the Chaparral 2J to the ground even when stationary, and the plastic skirts literally made the American sports car stick to the ground, exactly like a vacuum cleaner on the floor. The grip was unparalleled, and thanks to the absence of aerodynamic appendages the speed exceeded the impetus of 320 km / h. The result was incredible: in 1970, the Chaparral 2J took virtually every pole position in the CanAm category. This wouldn’t even be that incredible, if it weren’t there second classified, the McLaren M8C, which dominated the category until 1969, had an average gap of 2-3 seconds … Incredible! 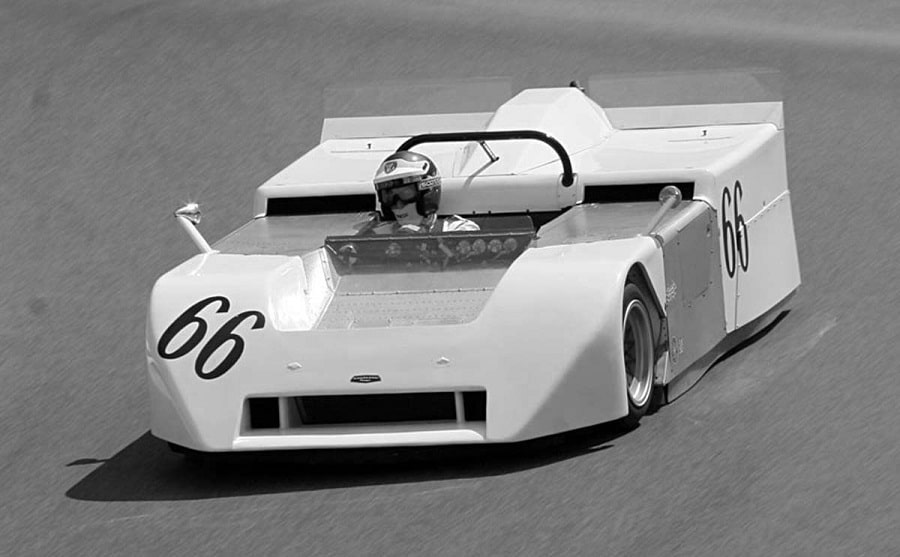 In the race, however, this superiority was never evident. The presence of two engines and this particular system made the 2J very unreliable, so much so that it only won a handful of races in 1970. And his career ended prematurely at the end of his only racing season. There presence of a second engine and the danger of the fans, which literally shot dirt and stones at the cars that followed it, forced the organizers of the CanAm Championship to banish it. It wasn’t the only “fan car” in history though. Lhe idea of ​​Chaparral was revived in 1978 by Brabham in Formula 1 with the BT46B. The BT46B was a conventional Formula 1 with an Alfa Romeo engine, which however had a huge central fan at the rear. 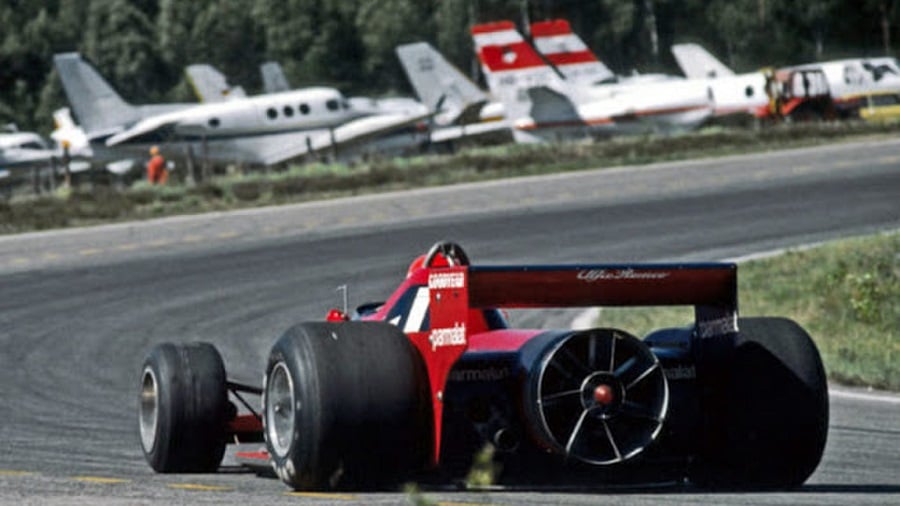 The idea of ​​bringing technology to F1 came from another designer, then very young but now famous all over the world: Gordon Murray, the father of McLaren F1 and other incredible F1 and non-F1 cars. With Niki Lauda at the wheel, the BT46B ran only one race, the 1978 Swedish GP, where a car that before the fan was struggling to get points he won with more than 30 seconds ahead of the runner-up. Since the next Grand Prix, the Spanish GP, the fans were banned forever from Formula 1 for the same safety issues seen in CanAm. And so, the Fan Car remains a car to be enjoyed in video games, thinking about what it could have become …

Volvo 850 Estate BTCC, among the strangest racing cars there is also a peaceful familiar… with over 300 HP

From one of the strangest and most controversial racing cars ever to a90s motorsport icon. Like Chaparral 2J, the Volvo 850 Estate BTCC it had only one season to shine, but that one season made it famous, still remembered today by fans all over the world. For the uninitiated, the B.TCC is the British Touring Championship, where peaceable sedans pumped up to 300hp and over competed in the most beautiful racetracks in the UK. 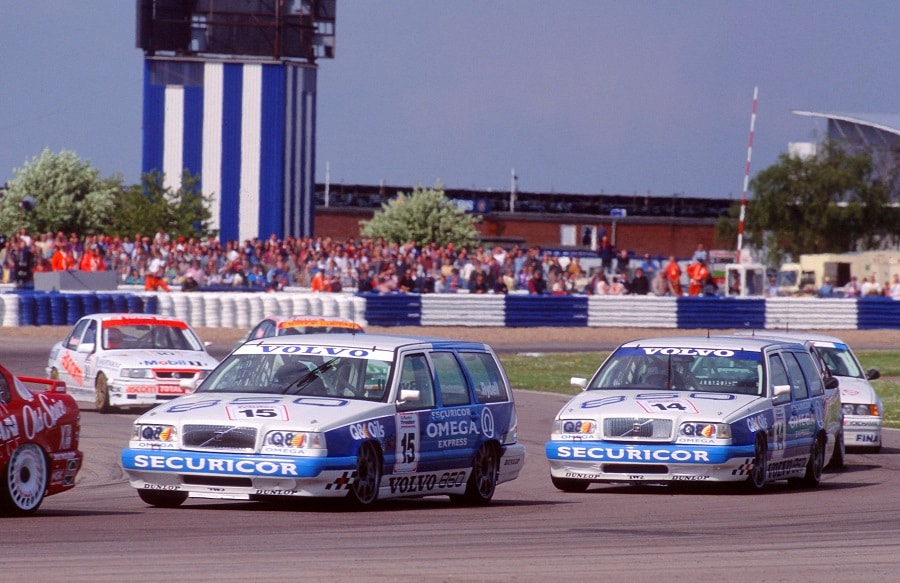 Among the “hosts” Ford Mondeo and Vauxhall Cavalier, the BMW 3 Series E36 and the very Italian Alfa 155, there was a flying Swede trying to grab the glory, the Volvo 850. Launched in 1991, the 850 was the prime Volvo modern. First Swedish (after the 400 Series, developed by the Dutch DAF) a front-wheel drive, the 850 debuted Volvo’s new design language, i 5-cylinder engines and a much sportier and more dynamic drive than the old 240 and 740. The 850 in fact reached, in the T5-R versions, over 230 HP, even on the Wagon version, launched in 1993. 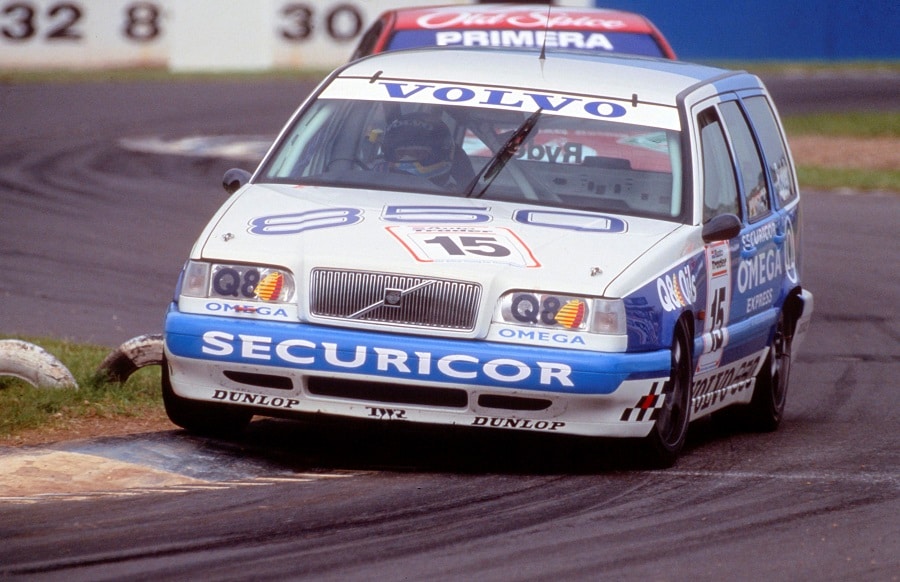 To do get to know the new Volvo “sporty aura” to the general public and prove that even the family members were quick and fun, Volvo came up with a crazy idea. Turn to the specialist TWR, Volvo decided to race in the 1994 BTCC season with an… 850 Station Wagon. Crazy, right? And in fact the detractors of this solution were many. Among those who saw it as mero marketing and others who thought it was only one joke, in Volvo they did not back down. The chassis of the estate was stiffer than that of the sedan, and the truncated tail, albeit limiting the presence of large rear ailerons, it was surprisingly more aerodynamically efficient, allowing for greater stability in faster corners. The engine was, of course, a 5-cylinder turbo 2.0 with 280 HP at 8,500 rpm. The sound and speed of that clunky wagon is still incredible almost 30 years later. 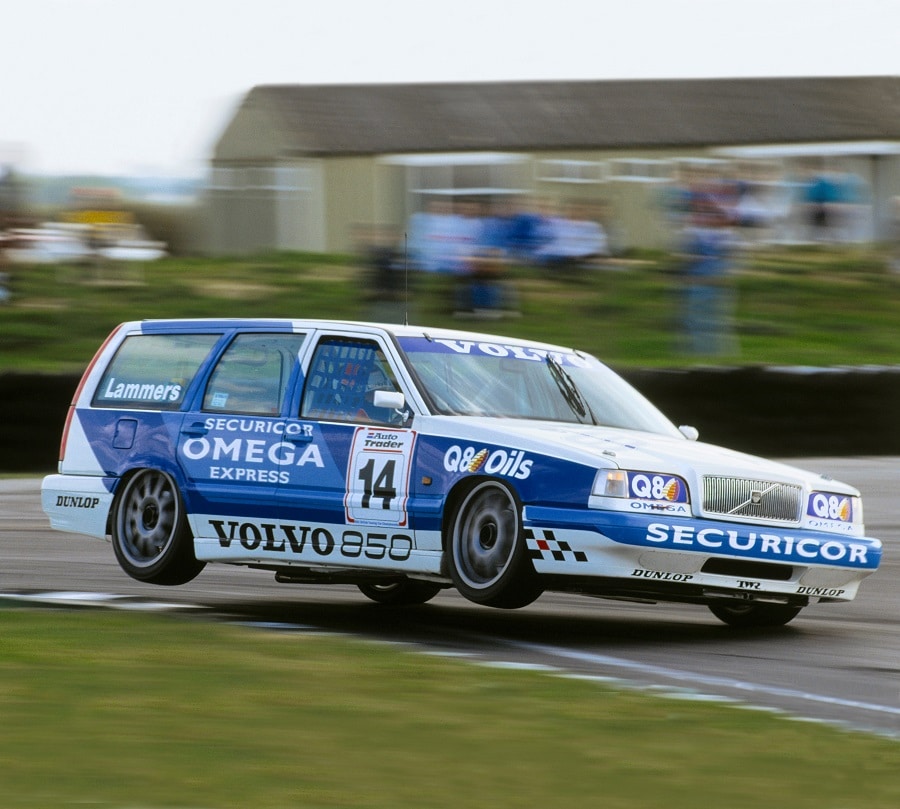 Even with all eyes on it, the 850 BTCC Estate (Summer in English means familiar) surprised everyone. Led by Rickard Rydell and Jan Lammers he performed very well on the track. He got several third places in qualifying and a fifth place as best result, before being retired for the 1995 season. In fact, in 1995 a change of regulation which required the presence of arear wing of standardized size. With the tail high, the Volvo 850 Wagon could never have fitted it and be competitive. Therefore, in its place came the 850 Sedan, which with some modifications to the engine and chassis he gained 13 victories in three years, and two overall third places as a constructor in 1995 and 1996. Who knows that with those changes, the 850 Wagon could have beaten the competition too …

Tyrrell P34, the first (and only) F1… with 6 wheels! The strangest (and most famous) racing car in the Queen Class

This brings us to today’s third car, which is arguably the best known on our list of weirdest racing cars ever, the Tyrrell P34. Born in 1975, her name may not tell you anything, but you will surely know her how “The 6-wheeled F1”. He ran for two seasons, in 1976 and 1977, getting a win with Jody Sheckter, the South African driver then winner of the 1979 World Championship with Ferrari. But the question everyone asks is always the same: how was such an absurd car born? Why does it have six wheels? 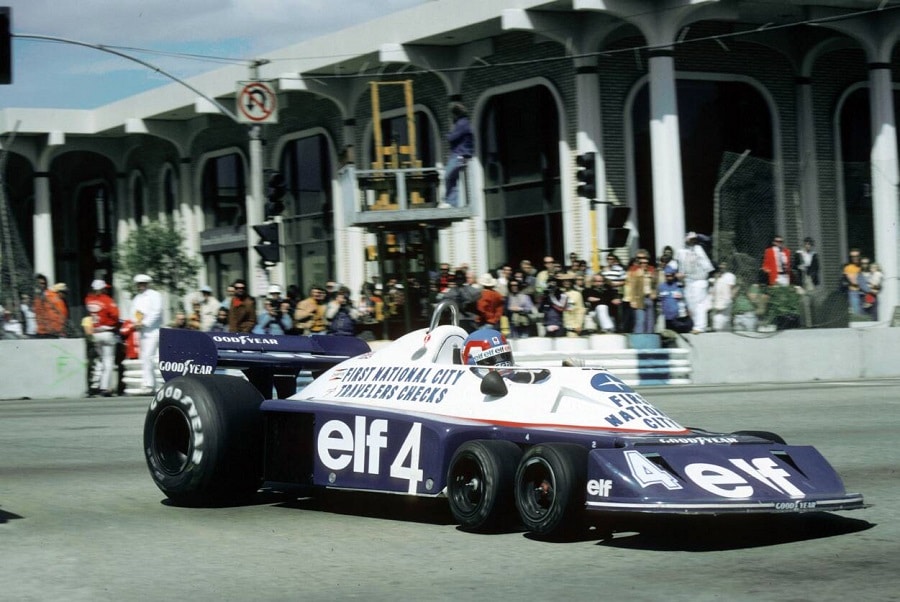 The answer is simpler than you might think. In 1975, in fact, Formula 1 regulated the front wing width at 1.5m. This meant that in order to have sufficiently large wheels, space for the steering column and for the rider’s feet, the front wheels should have been wider than the front wing. This may seem normal, but the wheels not covered by the wing generate various turbulences, thus ruining the flows and worsening aerodynamic efficiency and, ultimately, grip. Some, such as Ferrari, McLaren and Lotus, counterbalanced this shortcoming with larger rear wings and more efficient side bellies. In Tyrrell, however, they didn’t have the same idea.

The English team, founded by Ken Tyrrell and winner of 3 Drivers’ World Championships with Jackie Stewart, wanted Thinking outside the box. The basic idea was to have wheels small enough to fit within the meter and a half in front width. The initial prototype had 4 wheels, two normal rear and two tiny front, with a 10-inch diameter rim. But the car was undriveable, with crazy understeer and very low cornering grip. In fact, such a small wheel could not generate enough grip for the performance of a Formula 1. From there, the stroke of genius: if two wheels aren’t enough, let’s add another pair. 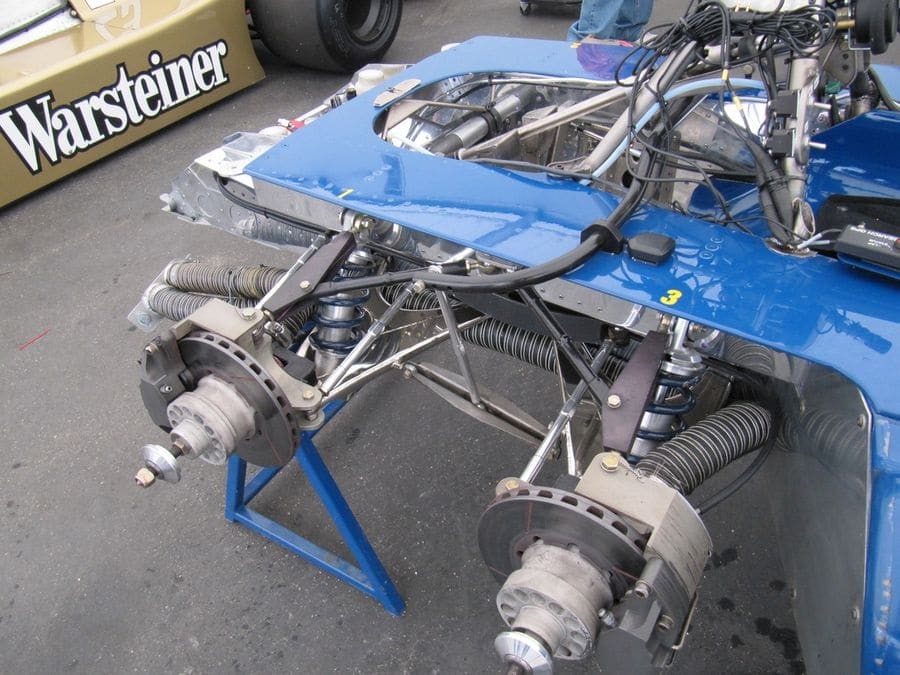 Thus was born the Tyrrell P34, the first six-wheeled F1. If you think that the regulation prohibits a car from having more than 4 wheels, you are wrong: a Formula 1 could (and still can!) have as many wheels as it wants. The four front wheels had two huge advantages. Given their small front footprint, they had a low coefficient of friction on the asphalt, allowing the car to be faster on the straight. In addition, as mentioned before, theand front wheels so small and hidden behind the wing made the flows very clean, maximizing the aerodynamic grip and speed on the straight. To then allow the rider to always see all the front wheels, the side bulkheads of the passenger compartment were in Plexiglass, thus allowing the two pilots …