Today is an important date for all computer enthusiasts. The Ibm 5150, better known as Ibm Personal Computer or Ibm PC, is in fact 40 years old..

It is often mentioned as the first personal computer in history. And if the definition is a bit forced, it can certainly be said that the IBM 5150 was the first computer to have had a popular diffusion. In short, having entered the homes of hundreds of thousands of people, thus breaking the barrier between electronic computers and ordinary people: since the launch of the IBM PC, it has been clear that anyone could have owned a computer. Thus was born the concept of personal computer.

Ma its commercialization would have started on 1 September 1981, exactly 40 years ago. And it would continue until April 1987.

The idea that the oldest and most glorious computer company in the world would make a computer available to all families immediately spurred sales.

In the first year, 200,000 Ibm 5150s were purchased, a surprising figure at the time. Just think of the comparison with the Sinclair ZX80, released the same year (and decidedly cheaper), which only reached 70,000 pieces sold.

The myth of 5150 would soon be fueled by the appearance on the market of several clones, called IBM compatible.

The 5150 would later be replaced by the IBM Personal Computer XT. And its success was even more surprising when you consider that the price was around $ 3,000, the processing capacity was rather modest, and the data management was tied to the purchase of (very expensive) external drives.

The hardware of the IBM 5150 included the central processing unit and an 83-key QWERTY keyboard with numeric keypad. It was not equipped with a mouse (which would begin to spread widely starting in 1984) and the monitor was sold separately so as not to further burden the cost. Users could choose whether to connect the IBM 5150 to the TV or to any display, or to buy two monitors from Armonk’s company, the 5151 (in the legendary green monochrome of those years) or the futuristic 5153, in color.

The central unit of the IBM 5150 could host a 64 kB memory on the motherboardhowever a 16 kB version was also marketed. The first geeks or nerds in history, which then began to spread together with the first personal computers, had the possibility of installing three expansion cards of 64 kB each, thus bringing the total memory to 256 kB.

The floppy had a formatted capacity of 160 kB, and there was no hard disk drive. The 5150 was the first computer to have an x86 microprocessor. 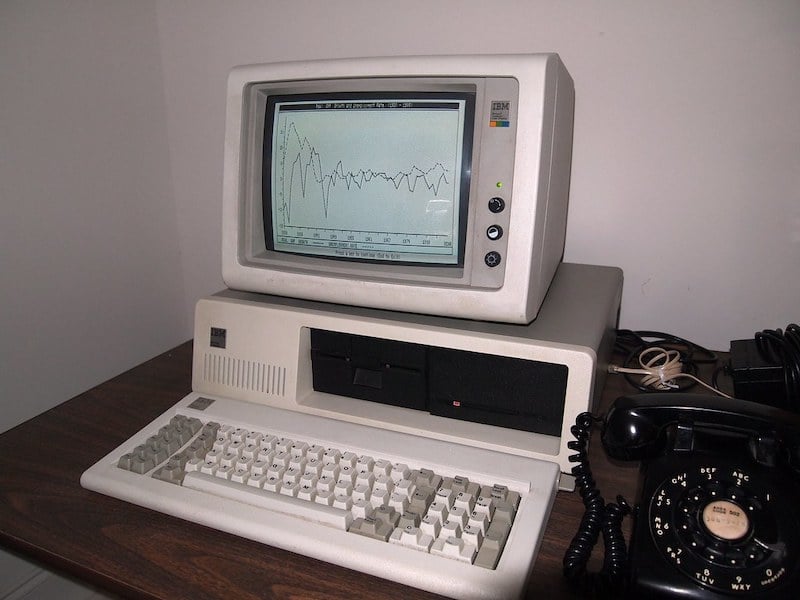 The process of making the IBM 5150, entrusted to a small team based in Florida, is curious.

To speed up the operations, components already available on the market were chosen, which allowed the assembly of an open architecture computer. A feature that among other things facilitated the birth of the first clones.

However, IBM’s choice also has another reason: by doing so, the company had kept itself safe from the risk of antitrust legal action, being already in a dominant market position.

In the IBM 5150 only the BIOS, a part of the operating system, has been patented.

The Californian team fine-tuned the hardware, while the operating system was built by a Seattle-based company. The same one who had already worked on some programming languages ​​for some of Microsoft’s first personal computers.

It is impressive (as well as a certain tenderness) to note the technological leap that has taken place in forty years.

Due to too much competition, IBM definitively abandoned the production of personal computers in 2004.

But today the company is increasingly focused on cloud computing and artificial intelligence. And part of his design concerns quantum computers, or (in other words) machines capable of reducing the processing time of very complicated operations from a few years to a few minutes.

Quantum Control, a quantum computer with more than 1,000 qubits, is expected to be launched in 2023 (ie quantum bits, quantum information units).