Hens, Cows, Llamas, Rabbits and Foxes are ready to enrich the lives of our Sims. The life of the campaign is finally among us, after weeks of waiting and months, years of requests from the Simmers community. Electronic Arts and Maxis had on their shoulders the heavy weight of the expectations of one of the most desired and complex reviews to make, ready to upset the lives of the Sims. In our preview, we explored the elements introduced in the expansion, but in this review, we find out how The Sims 4 Country Life in the field performs, along with the other expansions.

Our Review of The Sims 4 Living in the Country

The Sims 4 Country Living brings them into our Sims’ lives joys and sorrows of peasant life. In this expansion we will be able to look after new animals and cultivate the land in a whole new way. Added to these are new events such as village fairs and agricultural competitions but also the constant and urgent care of the animals. To let us explore this new world, Life in the Countryside ci introduce Henford-on-Bagley, the new neighborhood in which we will be able to enter into the heart of our new life.

Henford-on-Bagley is divided into three areas that take us from a wilder countryside near the woods, to the village square where you can shop and hang out at the local bar. The lots featured in this new map are the largest ever made, just to accommodate the fields and animals that require a large amount of space. Domesticated animals, namely Cows, Chickens (roosters and chicks) and Llamas, will in fact need a large shelter without which it will be impossible to buy them.

Likewise the plots of arable land, wider and wilder than those already present in the base game, require a large area. The new plots of land work the same way as the previous ones but reserve some special interactions as well as the possibility of cultivate abnormal agricultural products. Mega-Pumpkins and Eggplants that you can look after and show off at town fairs.

The new expansion of The Sims 4 brings changes in stroke panel of the lot. The latter is now divided into: Traits of the Lotto e Challenges. The former remain unchanged from those we know but in the latter we find new ways to play that can increase the level of challenge you play. Here we find the already known stretch Out of the retand, to which they are added they are added Wild Foxes e Simple life, in addition to those introduced by the other expansions.

While Wild Foxes it just introduces foxes hungry for eggs and chickens, Simple life brings a great revolution to The Sims 4 Gameplay. When this challenge is active food will no longer magically appear in the fridge in exchange for a punch of Simoleon. In fact, the Sims will have to collect and grow everything they need to eat. This is an interesting and well-crafted pretext to make the game even more varied and sparkling. To these are added new recipes, the possibility of preparing jams or cooking in the company of even the children who can finally get their hands a little dirty and not just with flour. The latter, in fact, will also be able to take care of the animals and cultivate the land for extra help in the demanding campaign.

Among the novelties we also find one new Sim aspiration call Campagne Keeper. Sims with this trait are happy to look after farmlands and befriend wildlife and grow a garden. Should the apex of aspiration be reached, the prize trait will be Confidant of Nature which guarantees a better relationship with animals allowing them to live happier and longer. 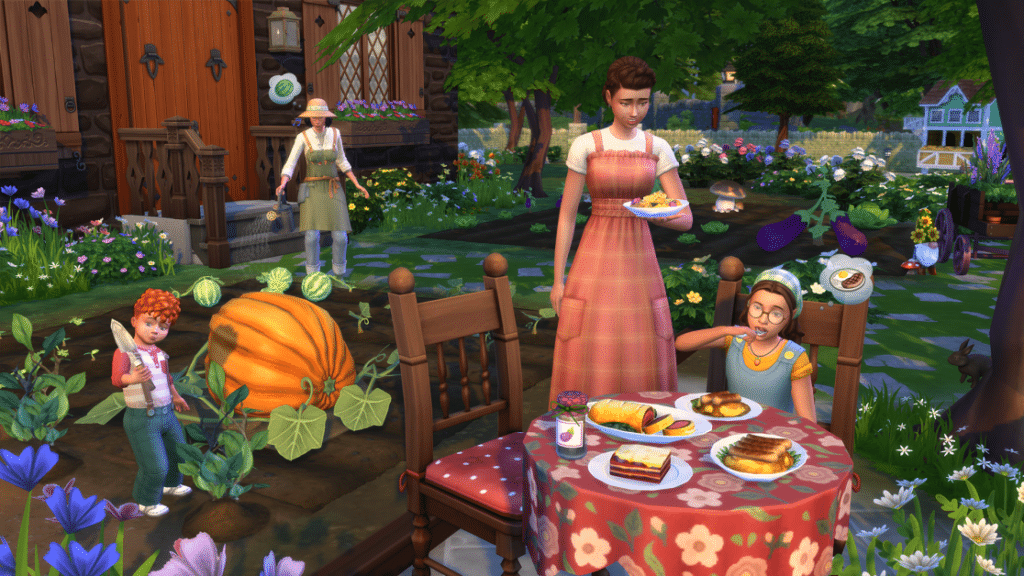 At this point of our review, after having examined the other previews in our test of The Sims 4 Life in the countryside, it is necessary to make a comparison of this expansion with the previous ones. One of the characteristics we, the Sims players for 20 years, have always taken into consideration, is the influence that an expansion has on the base game but above all the interaction it has with other expansions. Let us tell you that Country Life beats any expansion in both respects. The news and the atmosphere of Vita in Campagna, manages to fit perfectly with many expansions, Kits and Packs.

It was extremely rewarding to create our cottage in the countryside along with all the additions from the other expansions. We were able to enhance the cultivation of our plants with hives and work of the bee (The Sims 4 Seasons) and savor real country life without electricity or running water. This is why we washed the clothes with one tub (The Sims 4 Laundry Day) while our simmina was sitting in front of the fire and knitting (The Sims 4 wonder of the stitch). For the safety of the country animals there was instead our German shepherd (The Sims 4 Dogs and Cats) able to drive away hungry foxes. In all this, our living in contact with and respecting nature has been cemented thanks to the ecological footprint and attention we have given to the environment (The Sims 4 Ecological Life).

This is just an idea ofincredible explosive mix that you can create with Country Life together with the other expansions. A “collaboration” that we have never found in any other expansion of The Sims 4 and that will make us rediscover the old expansions in a whole new way.

The Sims 4 Country Life review in a nutshell

Whether The Sims 4 Country Living is indeed the best expansion in The Sims 4, it’s not up to us to decide. But it’s undoubtedly one of the most versatile and engaging expansions that have ever been released. This expansion introduces a truly impressive amount of new features able to disrupt The Sims 4 gameplay.

It seemed impossible to keep the interest in The Sims 4 alive after all these years, but adorable chicks and super fluffy rabbits made us think again!