If you need a quick guide to who Wario is and what makes his long-awaited return to WarioWare Get It Together, here are his origins!

We got to touch on this in our preview of WarioWare Get It Together and in our guide to the character itself in the context of Smash, but we never really went into it origins from Wario. Maybe we should fix it: after all, it is possible that the Big N has decided to remove the character from the platforming spotlight to dispel any confusion with Mario. Ironically, escapism was the first artistic vein behind every project with Wario as the rounded and sociopathic protagonist, allowing him to cross thresholds Mario never allowed.

We know Mario well, and his parody origins of the typical Popeye everyman are now part of popular culture, but for Wario things are very different and the road that led him to WarioWare Get It Together is very long. To pave it there is the common thread of materialism, who threw Mario’s heroic altruism to the winds from the start. Game designers, at the time, would have preferred to explore a different idea than usual with the sequel to the first Super Mario Land. “What if,” citing the rhetorical question that drives the recent Marvel Disney + series, Mario wants to mind his own business?

Specifically, why always look after a royal figure kidnapped by Bowser every other day as well? Doesn’t Mario have a life of his own? Apparently, the amount of coins scrapped in his adventures was enough for the plumber to buy an entire castle. So why not make the reconquest of the fortress the aim of his adventure? Hence, the birth of a distorted Mario, disastrous and desecrating all the pseudo-Disney canons erected against Nintendo’s mustachioed face. A “warui” Mario, where the Japanese word means “evil”. Wario was born. 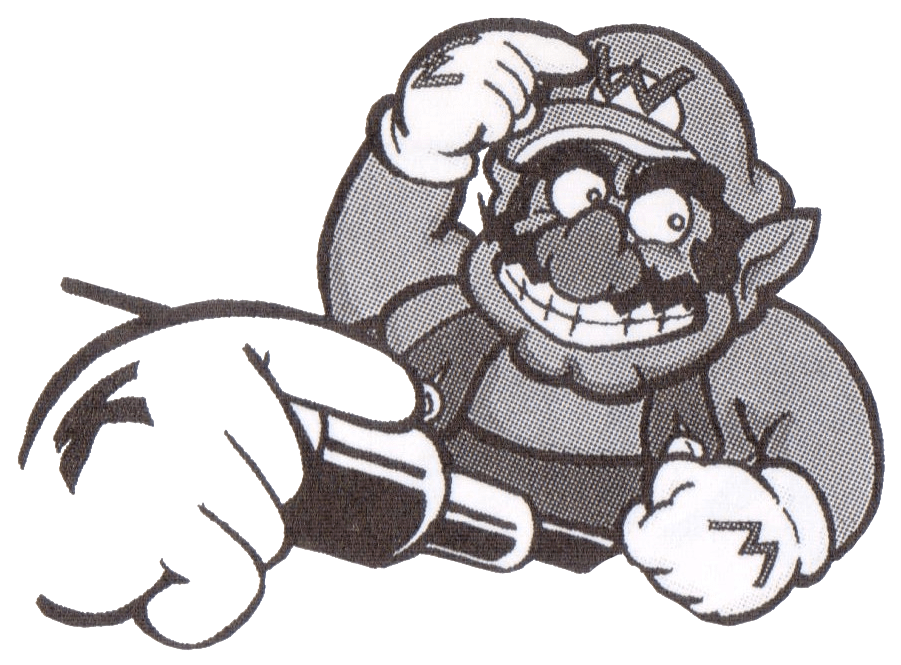 Illustration attributed to character designers Hiroji Kiyotake and Yoichi Kotabe: the design mixes, as we quote, “Bluto and the Disney version of Mangiafuoco”.

The light-hearted atmosphere of Super Mario Land 2: 6 Golden Coins it was already ready this way, also thanks to a lucky translation that would have given the character a cap with which to complete the deformed appearance of the original hero. And how can we forget the rest, more akin to the pages of MAD Magazine than to the almost fairytale worlds of the main series? The theme of worlds has been much less linked to biomes and ecosystems, relying instead on very specific themes. A mechanical Mario with the stature of the colossus of San Carlo Borromeo, a huge world years before Pikmin and a haunted area with a horror theme: the game was this and more.

We would love to elaborate on how the game has taken the raw experience of the first Land and transformed it from a “counterfeit” Bros. (below) to a credible scale replica of World, but our greedy boor is already elbowing: the limelight, on the other hand, are hers. And how to blame him? After six bosses who would be more at home in a Crash Bandicoot than a Nintendo adventure, we had another first. No, the idea of ​​seeing the final boss resort to power-ups certainly wasn’t born in Super Mario 3D World. Rather, it is all the work of the sack of a 1992 title!

Peasant yes, peasant no, on balance Wario managed to captivate the public from the very beginning … so much so that the third Super Mario Land would have kept the original name only in the subtitle. He was in fact born Wario Land, which with a change of protagonist brought the focus on the innate avarice of the character. This has also been reflected in the gameplay: one shoulder to overwhelm the enemies, many different power-ups and many objects to collect. The brake on the limits also applied to the sequels, further away than ever from Mario and his candor, putting only the immense ego of Wario at the center of the scene.

Lives and vulnerability have in fact given way to many new opportunities to transform. In short, as we use to make fun of today, Wario is not invulnerable, but “he is not studied” (sic) and he does not know it. From ignorance, understood in its best sense, however, excellent gaming experiences are born and this has led to the “cult” success of the series. After, with some handicaps, Wario returned to his weaknesses with Wario Land 4, something unexpected happened. Either for the detachment of the public, or for the waiting for The Shake Dimension on Wii for the return of Captain Molasses … the series of platformers had reached a dead end track.

More diverse than Wario – the origins of WarioWare Get It Together

We will avoid repeating what was said on the occasion of our preview of the game, so we will be brief: after using Mario as a hook for different gameplay experiences, now it was up to Wario to help another idea to take off, namely the one that hides behind the origins by WarioWare and, by extension, Get It Together. The best ideas of the Kyoto giant are also born in moments of loitering: if the good soul of Gunpei Yokoi in the seventies had not played with a mechanical arm, the children would never have had the Ultra Hand, after all.

Similarly, the idea of ​​turning gameplay ideas into very short games only found a place in the closet of Mario Artist: Polygon Studio on the Nintendo 64. The idea of ​​making a whole game out of it would only work under two conditions. The first is the insane self-congratulatory quotationism of the 9-Volt micro-games (in which the Ultra Hand also peeps out). The second is that a character should have sacrificed himself for such a crazy gamble. So delusional, this idea, that Mario would not have been able to stand it without the Rabbids to give him a hand. Why not try Wario?

So Wario has nothing to do, right?

It goes without saying that Wario, Smash and Mario spinoff permitting, after its origins it is no longer seen outside of WarioWare, but Get It Together is about to reconcile its two souls. Having spent the games of his franchise acting as a Trojan horse for the functions of the consoles on which they appeared, day after tomorrow the anti-hero will allow us to use the Joy-Con to combine the simple inputs behind each micro-game with a cast of supporting characters playable for the first time. If you’ve always dreamed of interacting “manually” with games as a character, it’s your lucky day.

Or at least (in fact) the day after tomorrow will be your lucky day. The hybrid of platformer, party game and puzzle game is about to reach our Nintendo platforms, and the September 10 is now around the corner. Hold on and avoid looking elsewhere: only two days now separate us from the release of what already promises to be an essential purchase. We do not say this only for the fans of the tripe in yellow-purple dungarees, but for all the players, precisely because of the uniqueness that WarioWare, from 2003 to today, still exudes from every pixel. Until then, the only superimposed command we feel like giving you is … “Stay tuned!”

Now it’s up to you to tell us yours: what do you think of the bizarre Odyssey of Mario’s mustachioed rival? Let us know below, and as always don’t forget to stay on TechGameWorld.com for all the most important news for gamers and more. For your purely gaming needs, you can instead find the best discounts in digital format on Instant Gaming.