The complete WitcherCon program announced by Netflix and CD Projekt Red. The first virtual event dedicated to The Witcher franchise. Available for viewing on Twitch and YouTtube channels between Friday 9 and Saturday 10 July

After the official announcement during the last day of Geeked Week, Netflix e CD Projekt Red revealed more details about the event WitcherCon. With special guests, panels and exclusive previews, a multi-format dedicated to the well-known franchise of The Witcher.

Conducted by Julia Hardy, a project studded with special contents, with never-before-seen insights capable of transporting the most loyal and curious fans into the sinuosity of the production processes and created behind the universe of The Witcher.

Exclusively, updates to the live action series of The Witcher and the upcoming anime film.

WitcherCon will be available on Netflix’s official Twitch and YouTube channels on July 9th at 7pm and July 10th at 3am.

We also remind you that the entire program is also present on the official website of the event WitcherCon. 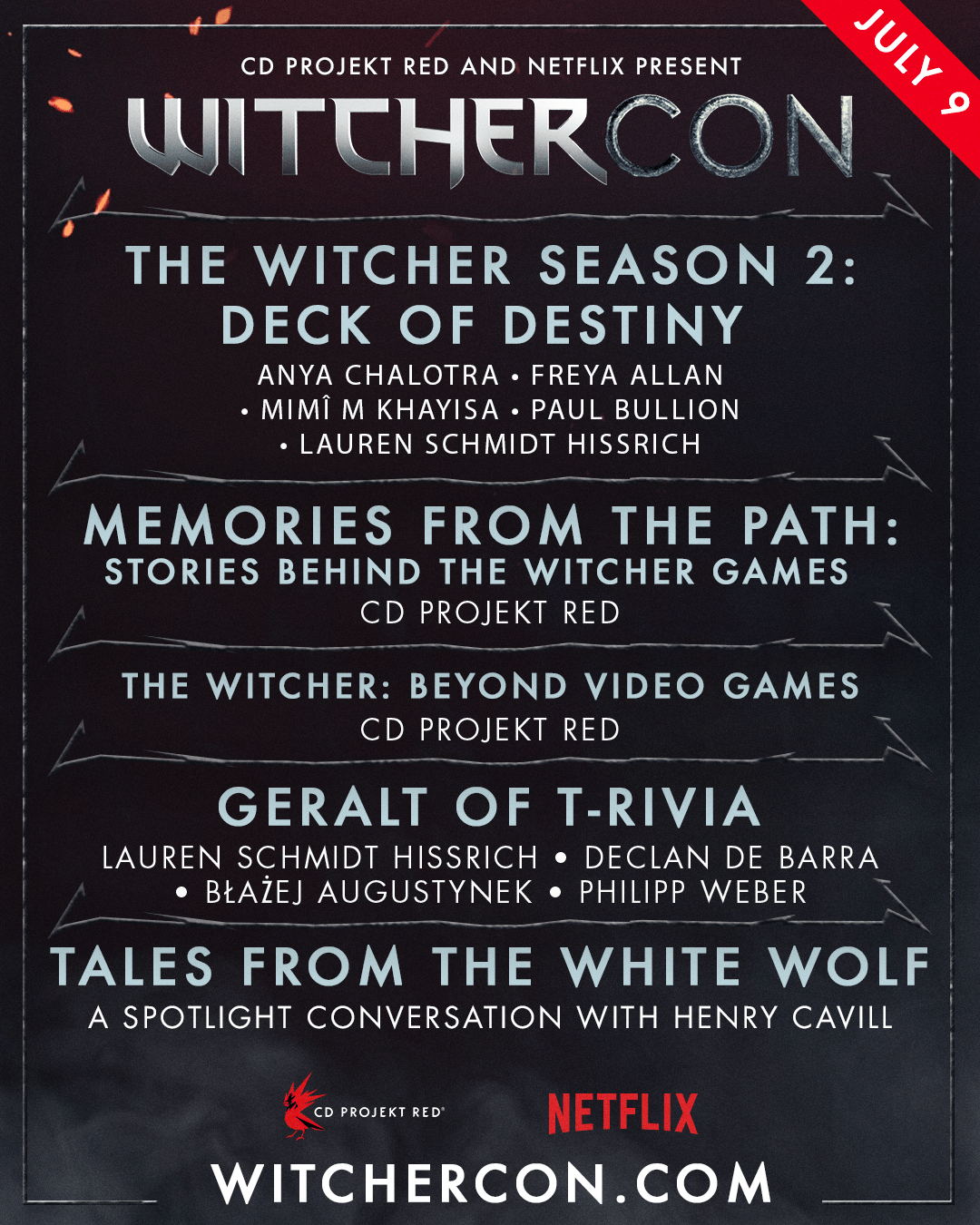 The calendar of the panels | WitcherCon: the complete program

A meeting vis-à-vis the cast and showrunner of The Witcher, The course and the fate of the guests, guided by an enigmatic deck of cards with the questions and curiosities of the fans. There will be surprise revelations, backstage insights and a pinch of chaos as the panelists accompany us on their journey through the filming of Season 2.

To follow, the meeting CD PROJEKT RED – Travel Memories – Secret stories from The Witcher games. The developers of The Witcher video game series, between an old memory and forgotten artifacts, a journey through time of how they gave life to the stories and events of the well-known saga.

The panel Geralt of T-Rivia, comes to life in the form of a quiz-style game, ready to test the minds of the creators of the video games and the Netflix series. Their acquaintance will be the final outcome of behind-the-scenes news, with spoilers rewarded as much as correct answers. Guests present: Błażej Augustynek, Philipp Weber, Declan De Barra, Lauren Schmidt Hissrich.

With CD PROJEKT RED – The Witcher: beyond video games, a journey between noir and dark horror, up to Old World and beyond. The Witcher universe with the latest details on upcoming comics and board games inspired by the franchise.

To conclude WitcherCon, Stories of the White Wolf: A Conversation with Henry Cavill. The actor himself, known for playing Geralt of Rivia, offers a meeting for fans. Moderated by Josh Horowitz (host of MTV and Comedy Central) will talk about fantasy, destiny and the whole world The Witcher. The White Wolf may also have a surprise or two in store.

To find out more, and stay updated on the latest news in the world of TV series and cinema, keep following us on TechGameWorld.com!