As always, at the Auto Shows the houses also present the splendid ones Concept Cars, extreme cars from an aesthetic and technical point of view that prefigure the brand’s technologies and styles for its future. And it is precisely the case of today’s protagonist, theAudi grandphere Concept. It’s about a electric representation sedan: the aesthetics are extreme and breaking, while inside the autonomous driving and an infotainment system to say the least futuristic complete the picture. Will the next A8 be like this when Audi switches 100% to electric mobility? Let’s find out everything together.

The aesthetics of the Audi Grand Sphere: beyond all norms, and behind it mentions the TT

As usual in the world of Concept cars, Audi grandsphere is also a car that does not respond to any canon or habit, but rather revolutionizes the way of understanding the car. Such an extreme and particular design almost never finds its way into production, but rather is useful for discovering the new stylistic features of a car manufacturer, which can be stolen from these concept cars.

Audi grandsphere in fact amazes with its tapered lines, soft but at the same time muscular and sleek. We are not dealing with a car that puts aerodynamic efficiency above aesthetics and aims to maximize interior space, as it can be for another representative car like the Mercedes EQS. S.i is a true flagship, the flagship of the House, and with its 5.35 meters almost 20 cm exceeds the already huge A8. Compared to other electric super-sedans, though, we don’t have a car that focuses everything on the interior, quite the opposite. 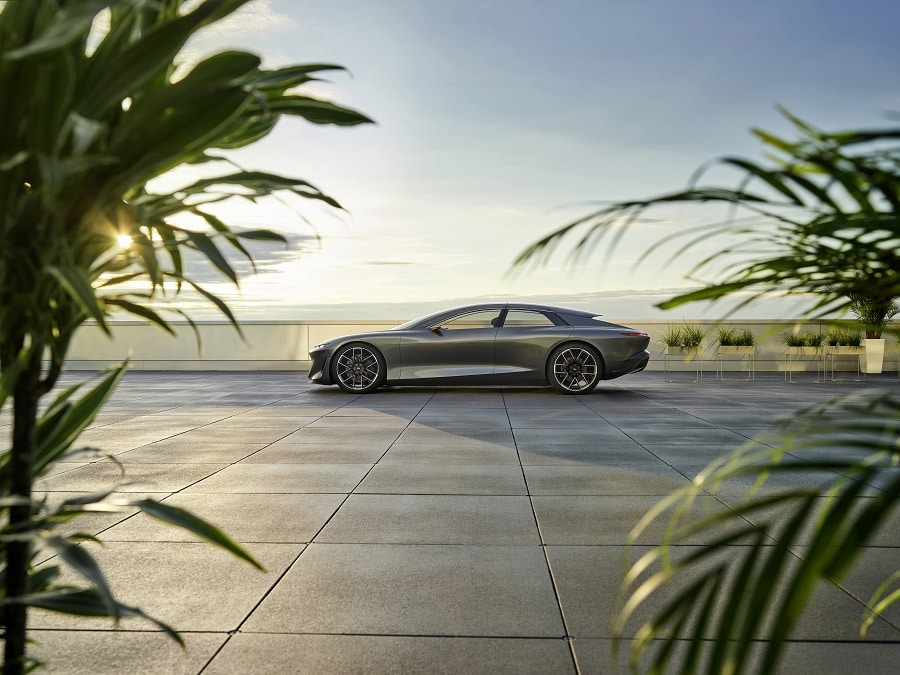 Despite the step is enormous, from 3.19 meters, Audi grandsphere has very pronounced front and rear volumes, and a low, racy roof. Despite the size, it almost looks sportier and more streamlined than Audi’s first EV, the e-tron GT, which however is almost 40 cm shorter. The front is sporty and aggressive, with a long bonnet, very thin headlights and ahuge front grille. I can already hear you: “But if it’s electric, what’s that big grill for? It’s useless!”. True, not having an engine to cool could easily do without the grill. But can you imagine an Audi without the classic Single Frame grille? I honestly don’t, and apparently neither Audi guys. So, to keep it, they gave her one new feature: hide dozens of sensors for autonomous driving, which is here at its peak in the Audi galaxy. 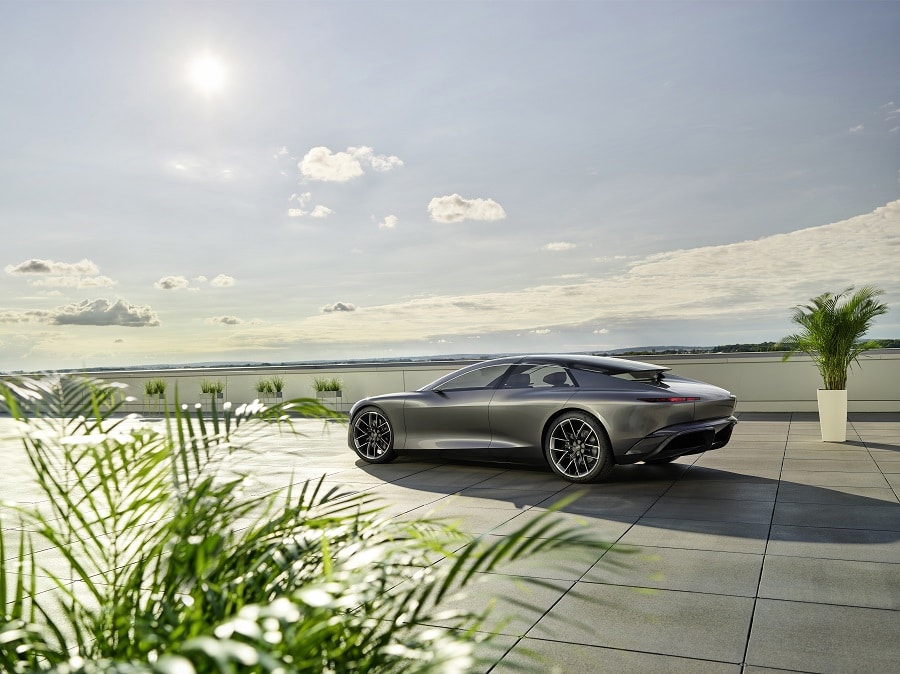 At the rear, however, we find one very sloping and personal tail, with thin headlights and a really small rear window. Audi declares that the tail cut, the rear wing and the headlight cut are one citation to the first Audi TT, launched in 1998 and still considered a style icon today.

Inside, the Audi grandsphere has a retractable steering wheel and an infotainment that is controlled… with the eyes

And in fact, Audi grandsphere was designed to be able to allow the steering wheel to be… hidden. For real: steering wheel and pedals within the grandsphere Concept, when not in use, they go to hide inside the dashboard. This is because Audi technicians have studied a cockpit that is comfortable and comfortable when driving, but above all spacious, airy and livable as the car drives. 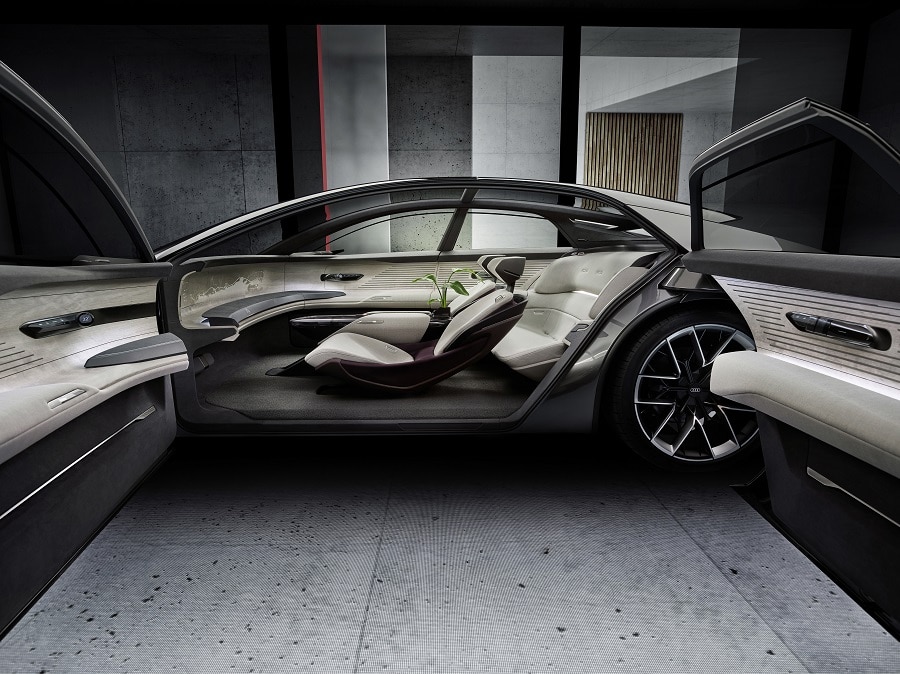 In fact, in this type of cars, the most important technological trinkets are often placed on the rear seats, that is the place where the owner usually sits, while a driver carries out the effort of driving. On the Audi gransphere, however, the driver is the car, capable of level 4 autonomous driving. Therefore, the front seats already have all the incredible solutions designed by Audi. 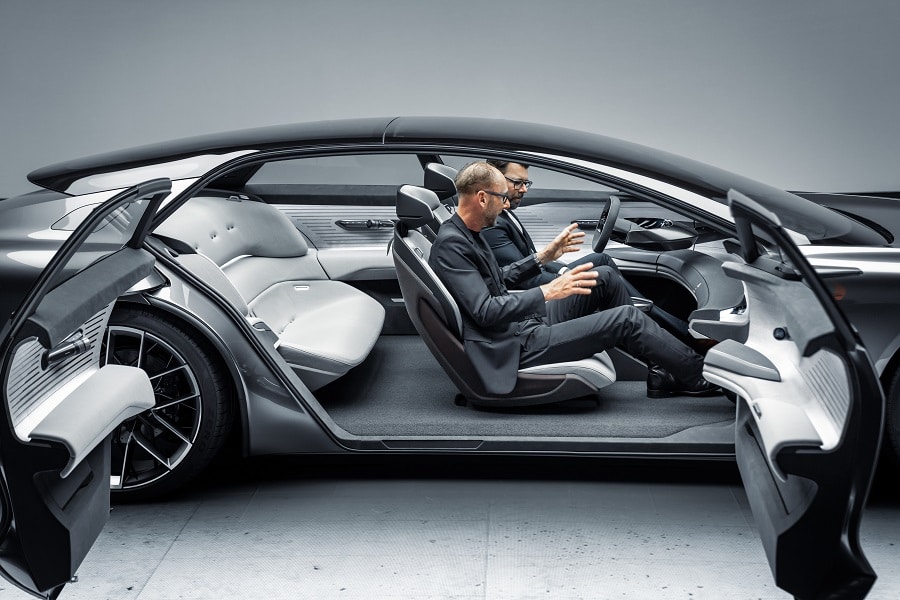 The cockpit is designed as a small loft: spacious, airy, elegant. The large windows also increase the light inside the passenger compartment. To get as much light as possible, Audi has come up with a very interesting trick. On the doorman, hinged like on a Rolls-Royce, there is a additional, thin fixed window above the classic electric windows. This allows you to have even more light inside the passenger compartment, but the two windows are separated by a chrome molding which lowers the window line and increases the sporty appearance of the car. 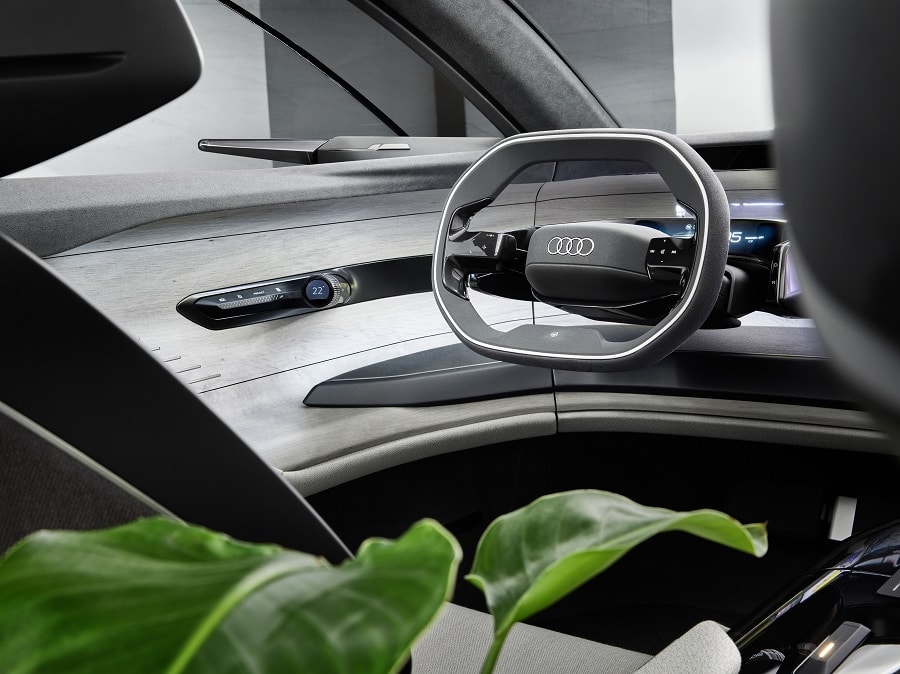 In addition to this, however, Audi grandsphere offers a lot of entertainment possibilities. For example, you can use a small table to work, or extract the integrated bar between the two front seats, complete with a cocktail station and glasses suitable for the occasion. THE climate controls, then, they look physical and are placed on the doors, but they hide a secret. In fact, they have gods motion detectors, which allow you to move the wheels without actually touching them: to move there are actuators, which will adjust the temperature to your liking. Between the seats, then, you can insert one small seedling, to feel even greener. 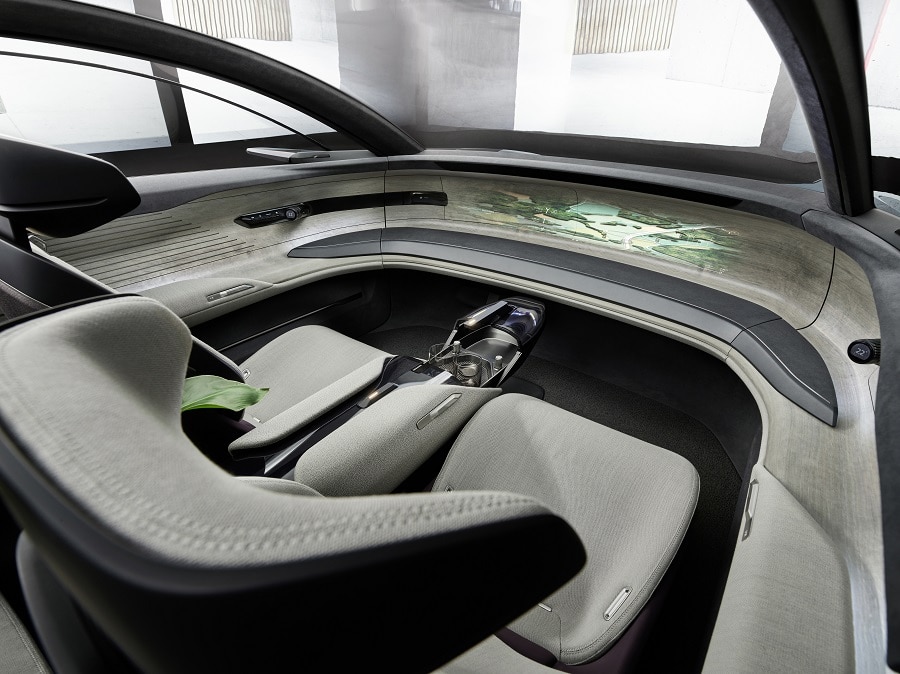 Finally, it will be surprising not to see one screen. Audi presented its idea for the interior of the future, based on the principle of “digital detox”, on its grandsphere. What does it mean? A place where there are no screens or touch screens visible. And the infotainment? Entertainment, of course, is present, but it is delegated to gods projectors, which turn the wooden panel under the windshield into a huge screen. And to command it just use … the eyes: Audi grandsphere has in fact a system of eye tracking which allows you to control the screen simply by using your eyes.

Audi has also released some technical detail, which could herald the characteristics of the next fully electric Audi A8. The traction, as per Audi tradition, is whole wheat quattro, obtained through the use of two motors on the two axes, front and rear. The overall power of the system is well 720 hp and 960 Nm of torque. Obviously without a gearbox, the two engines are connected to a 800V electrical system and 120 kWh lithium-ion battery. 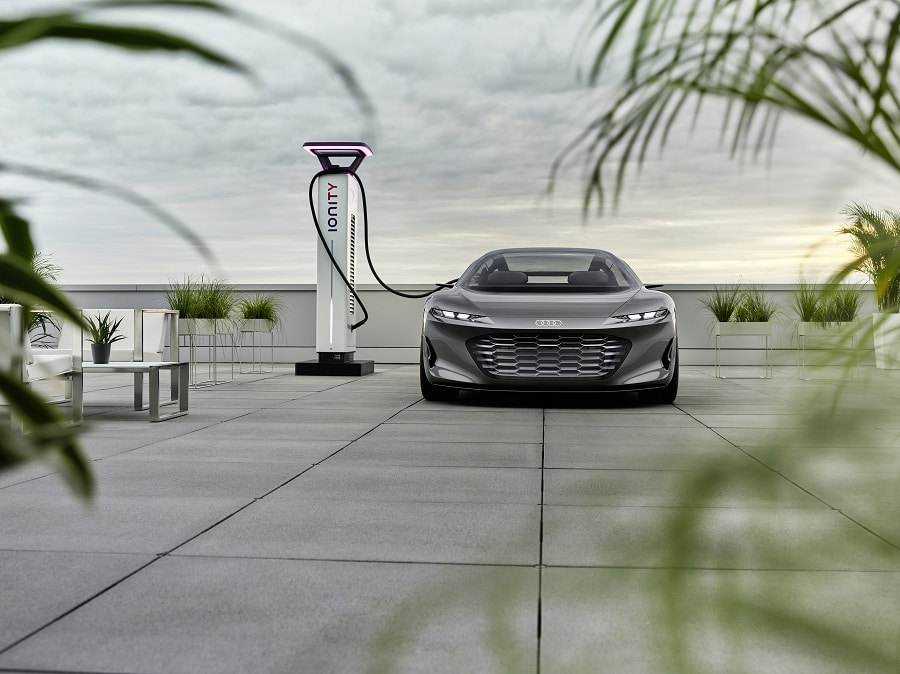 Numerically, we are even higher than the battery of the main rival, Mercedes EQS, which stops at 108 kWh. Autonomy? Audi claims that the grandsphere is capable of up to 750 km, slightly less than the 780 declared by the more “virtuous” version of EQS. Recharging, on the other hand, takes advantage of fast charges and reaches up to 270 kW of power. 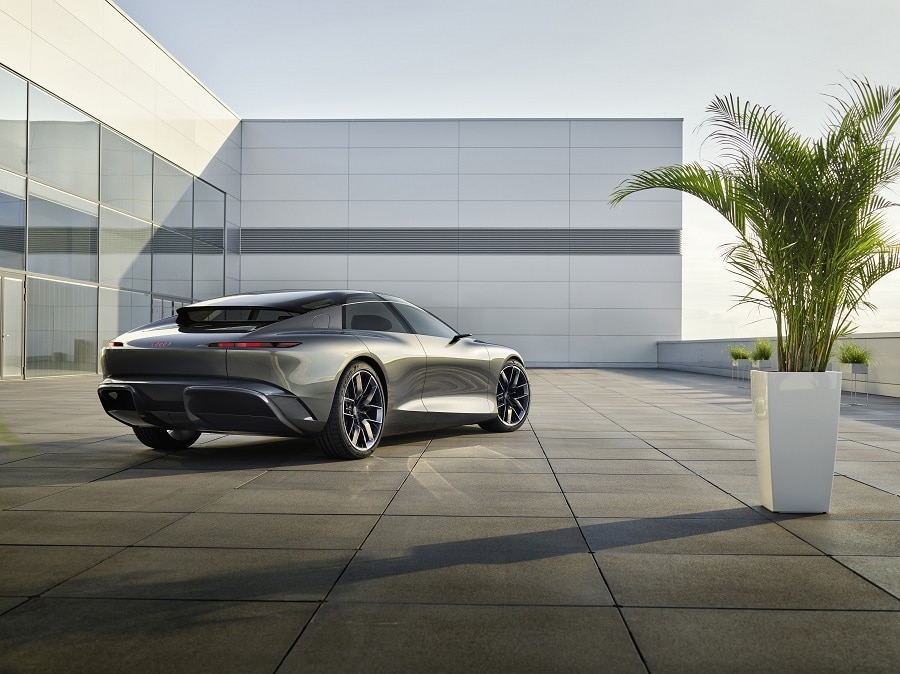 Finally, we close with the autonomous driving. As mentioned previously, Audi grandsphere can count on autonomous driving of Level 4. For the uninitiated, Level 4 allows the driver to get completely distracted from the road, as each driving action is completed autonomously by the driving system. And indeed, on the Audi grandsphere you can even do without the steering wheel, which however remains in case you want to feel the “old sensations” of driving again.

Will we ever see the Audi Grand Sphere on the road? Maybe not, but we can see the next A8 EV

This is therefore what hides the unprecedented Audi grandsphere, which heralds the cars that Audi will produce when it launches only more new electric models in 2026. The grandsphere is then one of the three models of the Sphere “family” which we will see in the next year. In 2022 there will be room for urbansphere, focused on city life, as well as sports skysphere.

This family of cars will show the world Audi’s new car idea. Not just means of transport, but a new, third living environment after home and work. A place where you can drive if you feel like it, but also where you can work, relax and have fun. Always with the quality, aesthetics and build quality that has always distinguished Audi in the world. And you? What do you think? Do you like this new era of Audi? Let us know in the comments!

Don’t miss our latest articles on the Audi world!