Directly from The Witcher 3 videogame, thanks to McFarlane Toys comes Geralt of Rivia in action figure version and we at TechGameWorld.com are ready to bring you our opinions in this review

Based on the most famous license plate work CD Project RED, McFarlane Toys created a series of action figures representing the characters of The Witcher 3: Wild Hunt. The title is, without a doubt, one of the action-RPGs that have marked the last generation of consoles. The third chapter focused on the events of the Witcher Geralt di Rivia it originally came out 6 years ago and, despite this, it still manages to amaze in many ways even when compared to modern titles.

With 3 videogame chapters that have consecrated the six novels written by Andrzej Sapkowski, in addition to the upcoming second season by Netflix, the reasons to adore the saga of The Witcher are many. If you are also a fan of the White Wolf, as well as collectors, this 7 ″ scale reproduction of McFarlane Toys could be for you. Let’s carefully analyze the action figure of Geralt of Rivia inside his armor of the Viper, in the course of this review!

Let’s start, as usual, from the box that contains our figure. This is made of a cardboard with a low-quality “stone-like” image printed on it that is very unconvincing. On the front side we find the window with the videogame logo and the Strigo’s name. On both sides there are little ones geometric carvings which allow the window to continue briefly, as well as on the upper side. The whole is enriched by logos e signs mastered by Geralt. On the back side we have instead an image of the figures and the words “22 moving parts“.

Contained in a plastic blister, l’action figure di Geralt di Rivia by McFarlane Toys include ben 3 accessories and a stand. If on the right we can see Geralt in plain sight, on the left we will find his two swords, the silver one and the steel one, in addition to the head of a werewolf. Once the contents have been extracted from the package, on the back side we will be able to see one circular base with “The Witcher 3: Wild Hunt” logo.

The package is therefore quite rich: a positive side for those who love to indulge themselves with particular poses or often change the position of their figures!

The amount of accessories present along with this figure is quite satisfying. As mentioned earlier, the two swords of the Witcher are added the head of a werewolf and the black stand to expose Geralt. Both silver and steel sword enjoy one quite “rudimentary” sculpt and a very basic painting. Although there are some details, such as the runic engravings on the silver sword, the uniform paint used both for the blades and for some parts of the handles makes the two accessories very flat.

The werewolf trophy, on the other hand, is of a completely different level. The latter is characterized by a black hair, the face garnished with brown, black and reddish colors as regards the wounds. Impressive are the bright white eyes and the jaws from which the sharp tongue protrudes. The monster’s head is wrapped in a rope, which can be held by the White Wolf. The detail of the clear tear at the base of the neck is also excellent, characterized by a glossy varnish.

As the creature’s head can be supported by Geralt, the two swords can be stored in the two special scabbards. These are joined to each other and, if we turn, form an additional accessory that can be easily removed from the rear of the figure. With a painting and better details than the swords, the two sheaths are open from the inside (the one that comes into contact with the Witcher’s back) for easier insertion of the two weapons.

Nothing to say about the stand: the classic PVC disk that McFarlane Toys inserts into its figures. An addition that is always a pleasure.

In line with the other figures of the company, this Geralt of Rivia is 1:10 scale. In fact, without any accessory it reaches aheight of 17.8cm. The material from which it is made is a PVC not at all inconsistent, which allows the miniature Witcher to touch the 122 grams of weight.

Characterized by his main armor, with which the adventure in Wild Hunt begins, this figure really faithfully reproduces the protagonist of The Witcher 3. The sculpture is really great. His face is practically identical to his digital counterpart both in terms of features and composition. There is also her typical hairstyle, scars, wrinkles on her face and unmistakable expression. Even the physiognomy and posture are very reminiscent of those of the White Wolf for how we interpret it in the videogame.

The details of the armor are varied and precise. We have the classic neck medallion, various harnesses that encircle the chest, as well as a belt with a hook inserted in the belt around the waist. The armor is made sensationally. The chainmail part gives the idea of ​​being in a metallic material, in addition to the fact that all the details distinguished by this texture are very soft so as not to limit any movement. From gloves, to pants, up to boots, even the hard plastic sections are really well sculpted.

The painting is characterized by numerous highs and some lows. One of the best parts is Once again the face where we have flesh-colored shades, red in the scars and on the lips, in addition to the iconic Witcher ocher eyes. Although the cuirass does not have numerous color gradients, the metal-tinted surplice, along with the muddy-looking medallion and boots, make the figure more dynamic. We would have preferred that the same “dirt” effect was also applied to the leather trousers, as well as on the arms and gloves, to completely eliminate that “static” effect.. In general, however, the painting has numerous peaks that benefit the total yield.

The action figure of Geralt of Rivia produced by McFarlane Toys is equipped with ben 22 pivot points thanks to the “Ultra Articulation” design of the company. All joints are difficult enough to move and, for this reason, we advise you to heat the figure with a hairdryer before proceeding to lay it (at least for the first few times).

Thanks to ben 2 pivot points on both elbows and knees, arms and legs can be positioned in the most disparate ways. As for the top, the head can rotate and tilt slightly due to the hair, which limits movement a little. The arms can rotate and rise, as well as the wrists: movable up and down.

Below we have instead the legs which, thanks to theexcellent mechanism present under the groin, they can widen until they reach a right angle. In addition to this, they easily reach a 90 ° angle even forwards and backwards. The foot features a ball joint and, therefore, it can be easily rotated, moved up and down. Furthermore the toe of the boot is posable.

The biggest deficiency in posability is theabsence of a joint in the abdominal part. Although there is one that allows the witcher to lean forward, backward and slightly to the side, it is not possible to rotate the body in any way, making it more difficult to reproduce some of his iconic poses. Thanks to the double joints of the knees and elbows, then joined to the voluntarily soft parts of the armor, we will be able to expose the figure in different ways. 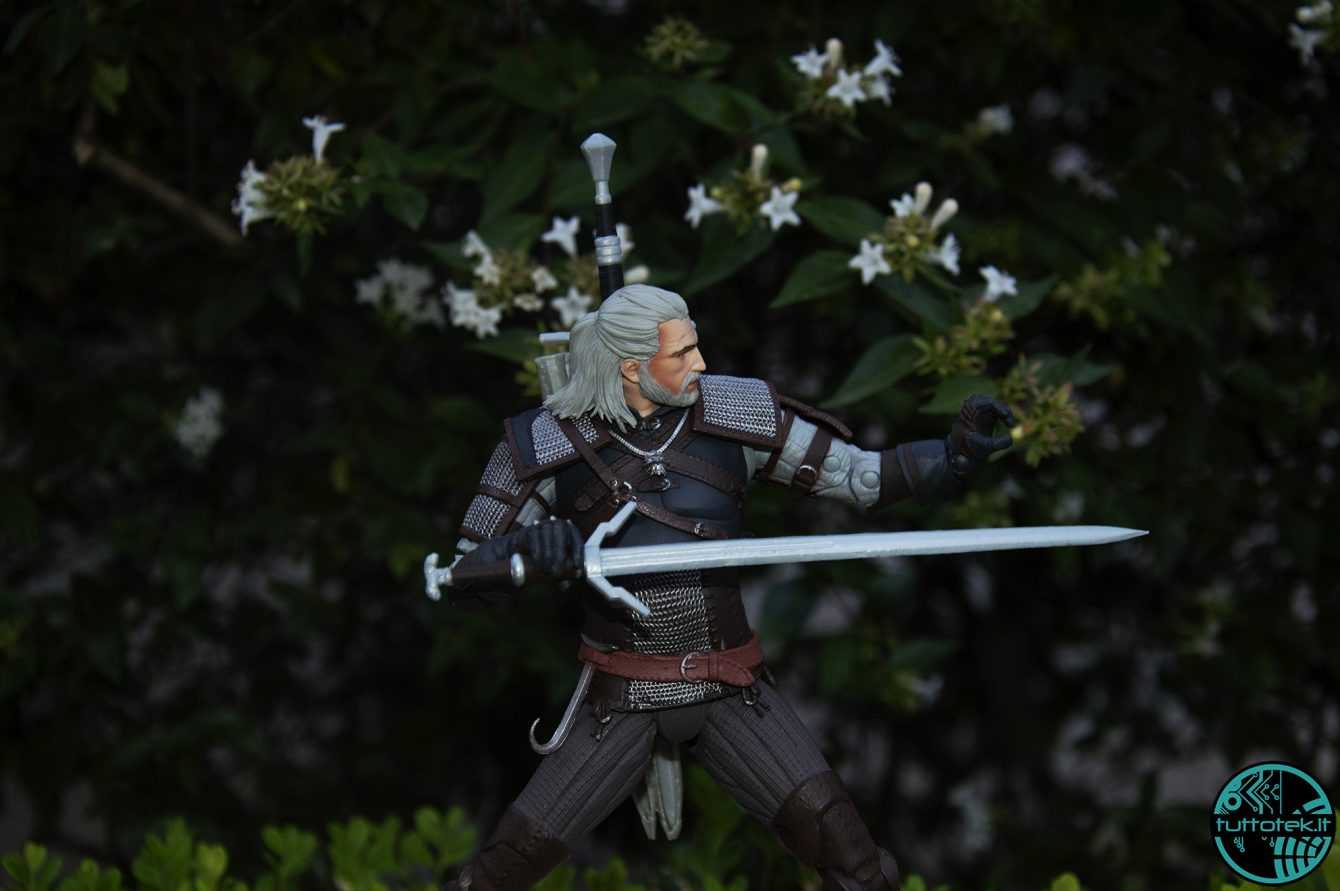 This action figure of Geralt based on The Witcher 3: Wild Hunt and produced by McFarlane Toys is, in summary, a collector’s item that every video game fan should have. Although it is lacking in some places due to the too uniform paint, with € 30.00 you will take home a 17,8cm long action figure lady.

When placed in the shop window holding the silver sword in one hand and holding the werewolf trophy in the other, this Geralt in 1:10 scale will stand out in your collection.

To purchase this action figure representing Geralt of Rivia in Kaer Morhen’s armor you can click here!

Towards the Wild Hunt