In the past few hours, Capcom has unveiled, through the expected launch trailer for Monster Hunter Stories 2: Wings of Ruin, the roadmap of the title for the coming months

The arrival on the shelves of Monster Hunter Stories 2: Wings of Ruin on July 9th was anticipated by the release, by Capcom, of a demo thanks to which we were able to bring you our preview. The title is a spin off of the main series, which continues to bill thanks to the success of Monster Hunter Rise, but nevertheless loved and awaited by fans of the franchise. An affection son of the success of an absolutely enjoyable and appreciable first chapter from many points of view, and the son of an extreme trust in the developers who work in the world of Monster Hunter. In short, Wings of Ruin is approaching by leaps and bounds and Capcom has held, in the past few hours, a livestream in which he showed the launch trailer, but not only.

Despite being a spin-off, in fact, Capcom has decided to treat the title as if it were part of the main trend, at least in the first months post-launch. During the livestream the company also showed the complete roadmap for the coming months for Wings of Ruin, with various additional content that will also be released in October. And we remind you that the game will be released on July 9th. Below you will find both the official Tweet with the launch trailer and the complete roadmap of the title! 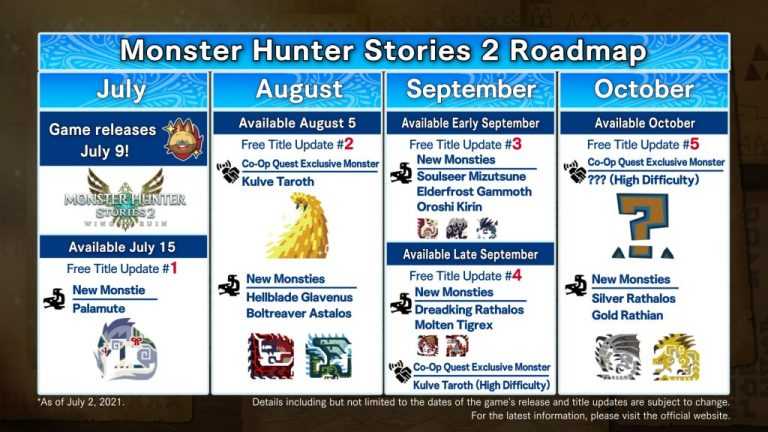 First step: on July 15, shortly after launch, in which a new Monstie Palamute, the Canyne, will be added. We will then move on to August 5, the day in which the powerful Kulve Taroth, already present in Monster Hunter World, will arrive in Monster Hunter Stories 2 and, also in this case, will have a dedicated multiplayer event. Also added two new Monsties, Hellblade Glavenus and Boltreaver Astalos.

A September instead two updates will arrive. The first, earlier this month, will introduce three new Monsties, Soulseer Mizutsune, Elderfrost Gammoth and Oroshi Kirin. Towards the end of the monthinstead, in addition to the addition of the Dreadking Rathalos and the Molten Tigrex, there will also be a new multiplayer co-op event for the Kulve Taroth. In Octoberinstead, the protagonist of the co-op event is still mysterious. Instead, the Silver Rathalos and the Gold Rathian will be added.

In short, a roadmap very rich in content and updates that of Monster Hunter Stories 2: Wings of Ruin, which after the launch trailer is ready to reach the shelves around the world. And what do you think of the Capcom title? Write it to us below in the comments, we will continue to keep you updated with all the news, guides and reviews on videogame and tech! And if you are interested in game keys at affordable prices, we recommend that you take a look at the InstantGaming catalog!