Long weekends are back like a birdie: Mario Golf Super Rush brings three new Spirits to the Super Smash Bros. Ultimate Board

It wouldn’t be a Wednesday without Masahiro Sakurai’s fighting game giving us some sneak peeks on the weekend’s tournament, and now it’s up to Mario Golf Super Rush bring new Spirits in Super Smash Bros. Ultimate. After a crazy pinball to host an online tournament, this time it will be a cross-promotional event to expand the now colossal encyclopedia of the game. Usually a lot more time goes by than that, but this time it took Sakuna: Of Rice and Ruin only three weeks before they had company. However, this time around, we have less information than usual.

At the writing of the article, in fact, the event dedicated to the three new Spirits from Mario Golf Super Rush does not figure in the official Super Smash Bros. Ultimate Twitter account. However, this does not stop us from helping you by providing you with basic information. First of all, as you can see in the image above, three of the playable characters will represent the game. We allude to Mario, Luigi e Peach, which we assume will be played by their counterparts seen in the first, second and third parts of our cast guide respectively. As for the days, however, by now you know the rule. 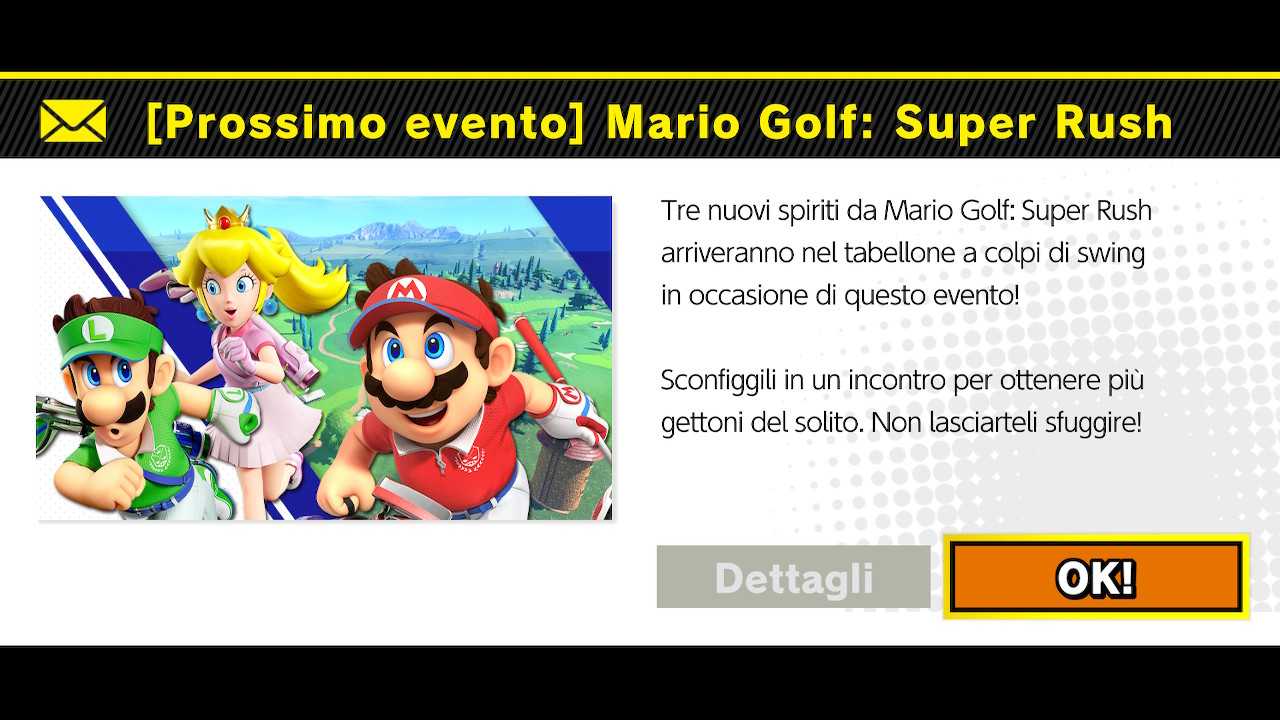 The presence of unpublished content in fact involves more time at your disposal. Specifically, you will have five days in total. Spirits will appear on the board starting with Friday 6 August at eight in the morning and they will disappear from circulation at the same time as Wednesday 11. We are now almost at the halfway point: next week, in fact, a month and a half will have passed since Kazuya’s arrival in the cast. We may know who the latest playable character is in the upcoming Nintendo Direct, which may not be far off. You can find out more by checking out the latest indie semi-leak.

Now it’s up to you to tell us yours: what do you think of the upcoming golfers? Let us know below, and as always don’t forget to stay on TechGameWorld.com for all the most important news for gamers and more. For your purely gaming needs, you can instead find the best discounts in digital format on Instant Gaming.