Often, when we tell you about the cars we test, we often mention the glorious past of the manufacturers. Centuries-old companies, which have been producing legendary models for over 100 years, and have been present in the automotive industry since the beginning. Not all the houses, however, have had the same genesis. From presses to cork tubes to pepper mills, here is the story of 8 car manufacturers that were doing before the car… far from it. Welcome back to Auto for Dummies, the column that explains the most hidden parts of the automotive world. Are you ready?

Let’s start immediately with a bang, talking about the story of one of the most loved and dreamed of car manufacturers in the world, Lamborghini. Its history is also one of the best known and best known by enthusiasts, but it is so memorable that it is mandatory to re-propose in such a context. For those who do not know, in fact, the founder of Automobili Lamobrghini, Ferruccio Lamborghini, was born as a tractor manufacturer.

Even today, the Lamborghini Tractors (now part of the SAME-Deutz Group) is still today one of the leading manufacturers of agricultural machinery on the market, thanks to the quality of its products. Born in 1948, in a few years Lamborghini Tractor has secured a place among the most important producers, guaranteeing its founder Ferruccio to be able to satisfy, thanks to the earnings from the company, its great passion for cars. By admission of the same Ferruccio, at the end of the 1950s, could afford to “drive a different sports car for every day of the week”. Jaguar, Alfa Romeo, Lancia, Mercedes 300SL: nothing was missing, not even two Ferraris. 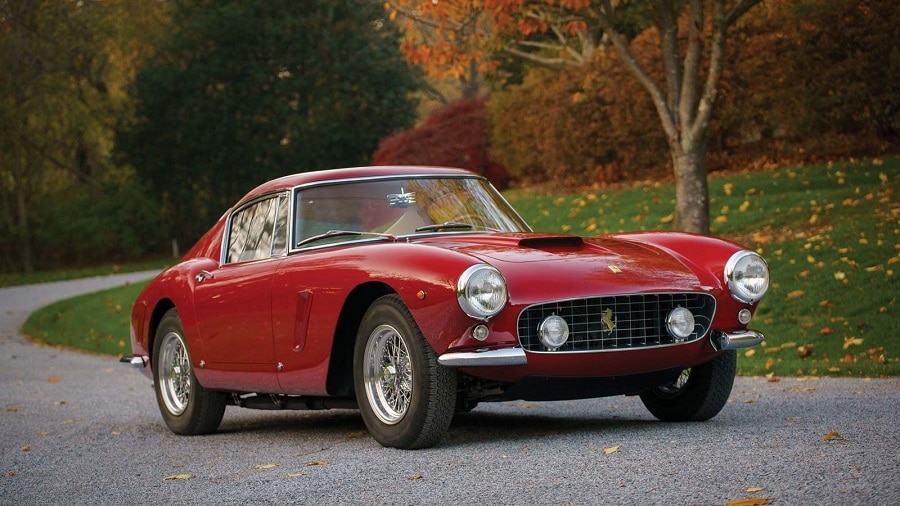 Yes, you heard right: as reported by the historic Lamborghini test driver Valentino Balboni, “Ferruccio had two identical Ferrari 250 GTs. He loved to skid, and with his aggressive driving he continued to have clutch problems ”. Balboni then recounted it several times legend, confirmed by Ferruccio himself but denied several times by Enzo Ferrari, which led to the birth of Automobili Lamborghini. “After spending mountains of money to repair his cars in Maranello, after yet another breakdown Ferruccio had his 250 GT disassembled by a Lamborghini mechanic. So Ferruccio discovered that the clutch that broke every time was the same one mounted on his tractors.” 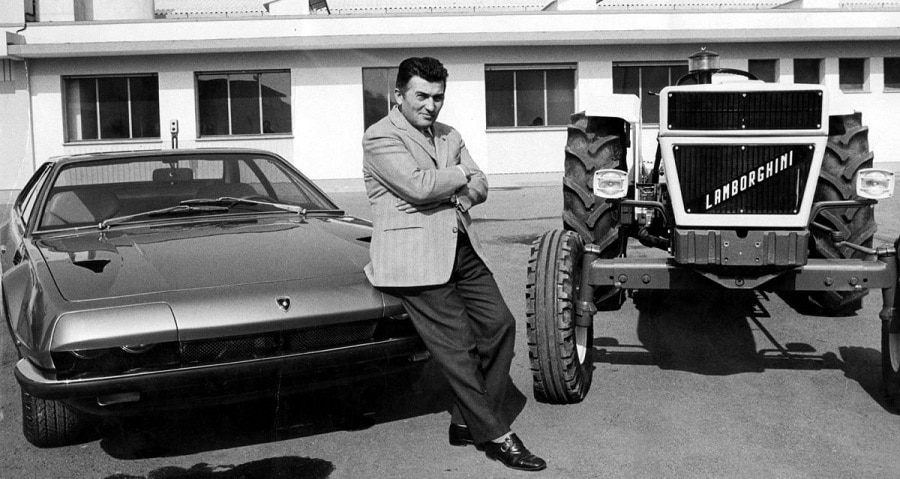 After this news, legend has it that Lamborghini personally went to Ferrari complaining rather vehemently: “I pay for his cars worth millions and then they are built with my parts!”. It seems that Ferrari, in the end, answered in a piquant way to Lamborghini: “The car is fine. The problem is that you are unable to drive a Ferrari. Better get involved with tractors“. This response sent Lamborghini on a rampage, and was the final push for the start of Lamborghini’s automotive adventure. Ferrari, for its part, seems to have said “We have lost one of our best customers”, believing very little in Lamborghini’s abilities.

Although for the Drake Lamborghini he was only “a peasant who only knows tractors”, in a few months the volcanic Ferruccio surrounded himself with some of the best Italian technicians and designers. He hired for the engine division Giotto Bizzarrini, creator of the Ferrari V12s (including that of the legendary 250 GTO), for the chassis Paolo Stanzani e Gian Paolo Dallara, for the line Franco Scaglione e Touring Superleggera. In a few months, they presented the first Lamborghini, the 350 GTV, a unique example of a classic and elegant sports car at the 1963 Geneva Motor Show.. According to Lamborghini, in fact, its cars had to be sporty, but without neglecting driving pleasure and build quality. 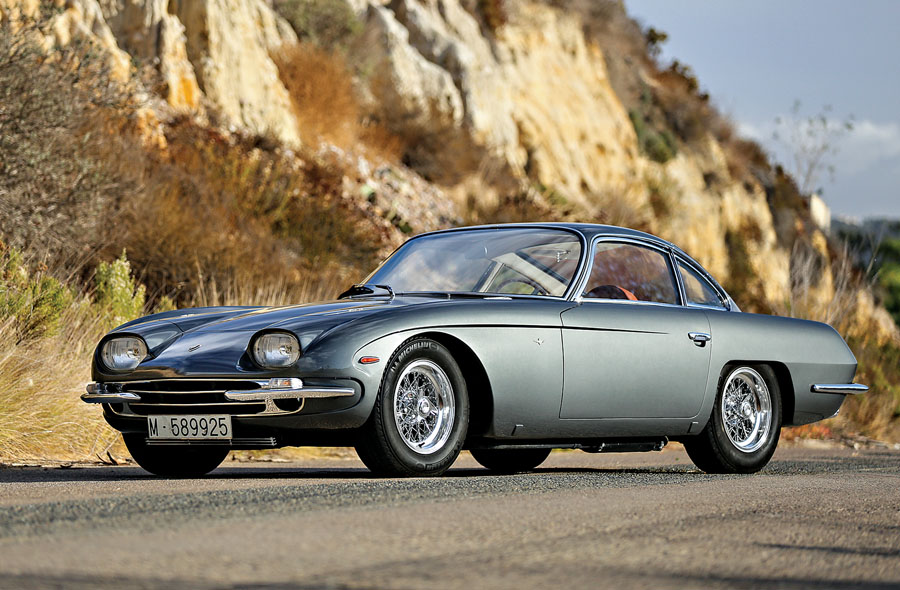 The first, true Lamborghini, however, is this, the 350 GT, a very traditional car with front engine and rear wheel drive, a Gran Turismo with excellent performance. Under the hood, however, there was already the symbol of Lamborghini, the naturally aspirated V12 of Giotto Bizzarrini, here with a 3.5-liter capacity. The Lamborghini V12 of the 350 GT was and still is at the base of the Toro range, which arrived until 2011 on the Murciélago and still present in the range, albeit totally redesigned, on the incredible Aventador. Since 1963, Lamborghini has made great strides. 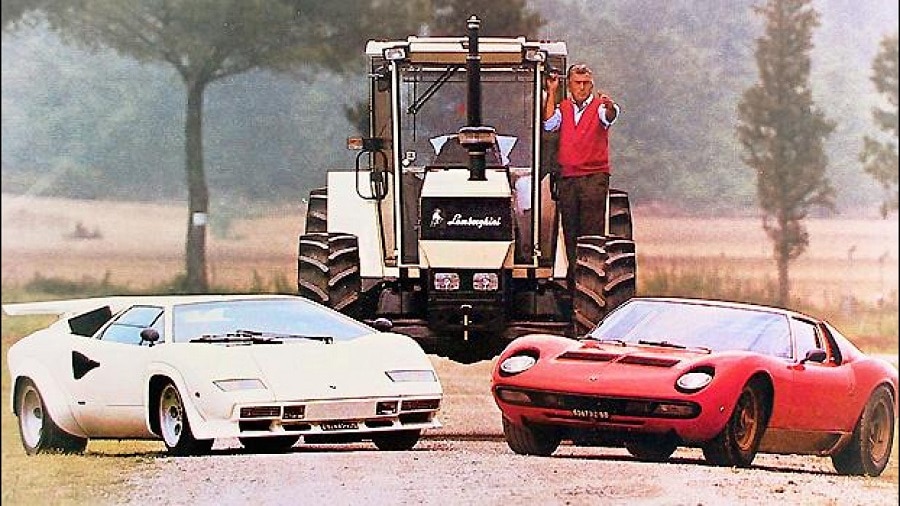 He revolutionized the world of sports cars with the the first real Supercar, the Miura. He has created legendary models such as the Countach, the Diablo, the aforementioned Murciélago and Aventador and many others, certainly making the skeptic Enzo Ferrari think again. Since 1998, he has been under the wing of Audi, which has brought quality and an economic stability that has made the Sant’Agata Bolognese company one of the most successful Italian manufacturers in the world.

Peugeot, 211 years of history, from cars to… pepper mills?

After having ventured into the legendary history of one of the youngest car manufacturers like Lamborghini, it is time to go back, much further back, by retracing the history of one of the oldest companies in the world: Peugeot. The history of Peugeot dates back to the 15th century, where the Peugeot family was one of the richest and most influential in France, settling in the cities of Sochaux e Montbéliard, in Franche Comté in the center-east of the country. 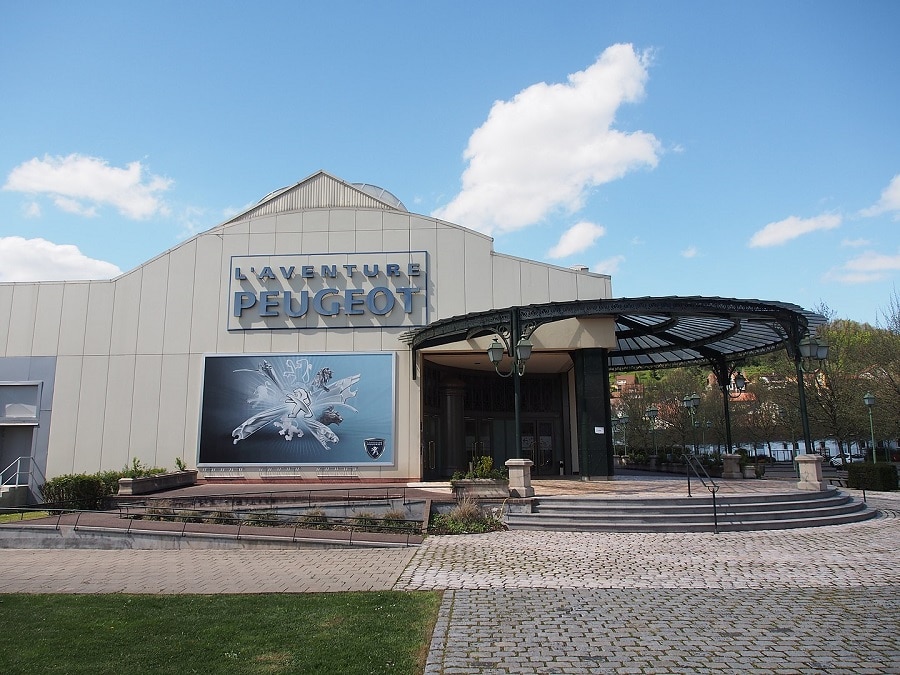 To make use of the family’s resources, in 1810 two young brothers, Jean-Pierre II and Jean-Frederic Peugeot, turned an old mill into foundry and rolling mill. From that small company began the Peugeot empire, which began to produce tools and objects of all kinds. Within a few years, the quality of Peugeot steels became world famous, making steel components for watches, corsets, blades, saws, umbrellas, curtains and so on. But in the history of Peugeot, there has never been the desire to be satisfied. 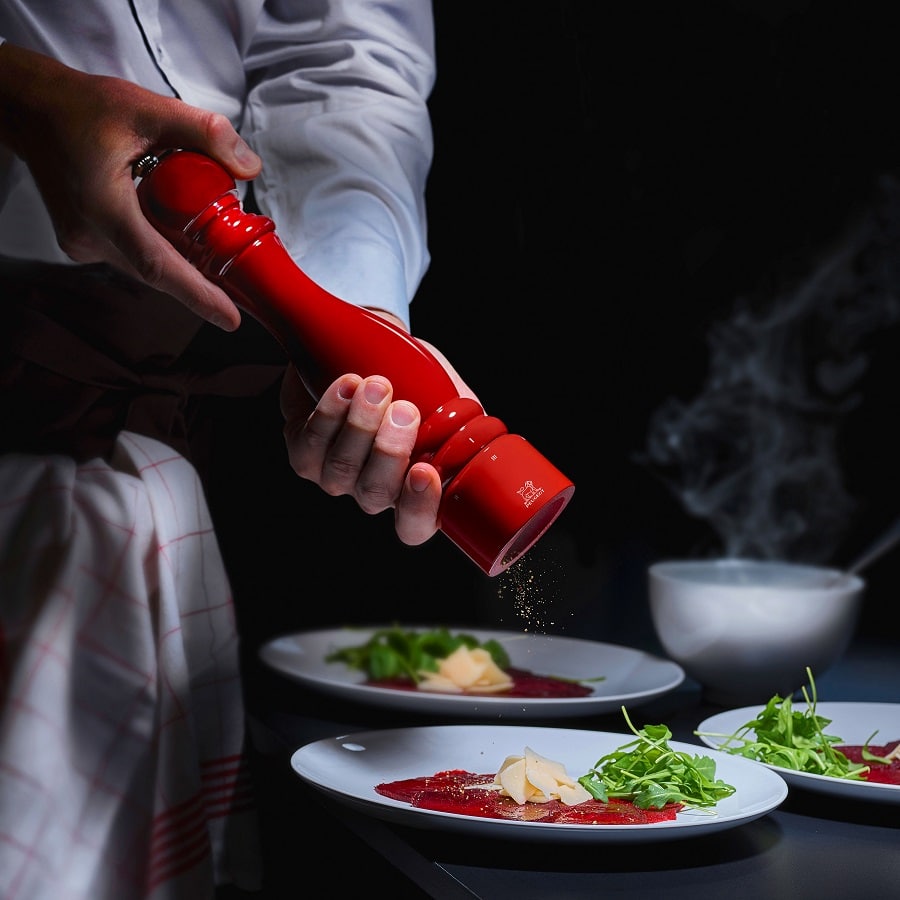 With the change in command of the company of children and grandchildren of the “Peugeot Brothers“, The Peugeot brothers, the French giant also began to produce components for motorcycles and its firsts bicycles, in 1882. Peugeot bicycles were among the best in circulation, and the French company continued to produce them until the mid-1900s. But that’s not all. In 1871, Peugeot introduced the 10-hour working day, a mutual aid society and, in 1876, a pension system., 30 years ahead of French law. It was around this time that Peugeot started producing too pepper mills, salt mills and kitchen utensils, also among the best around. Even today Peugeot, through Peugeot Saveurs, produces the best pepper mills and salt shakers on the market. 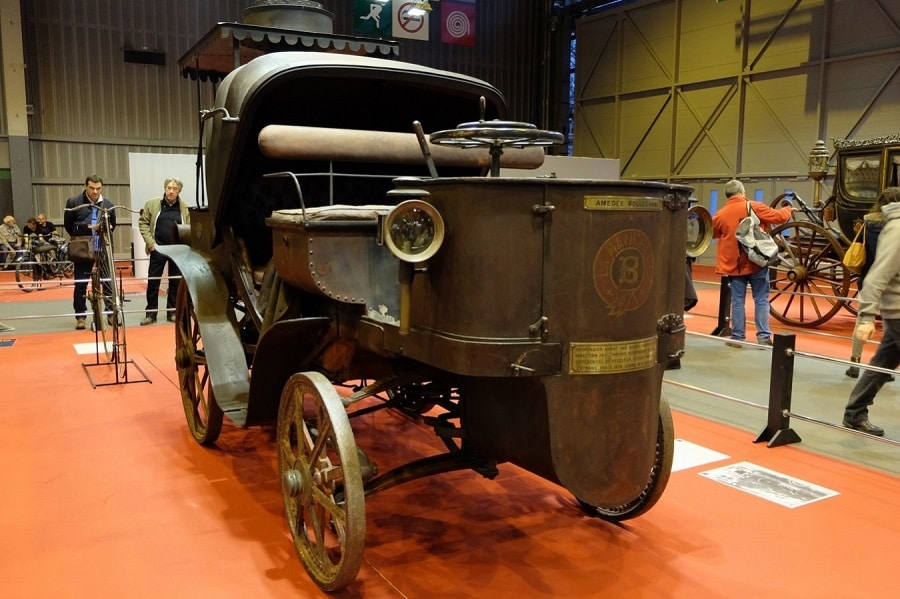 Here, but the cars? In 1880, Armand Peugeot, one of the numerous Peugeot brothers, began to explore the world of “autonomous”. He became interested in a French car, the Mancelle, equipped with a steam engine. Falling in love with this world, Armand Peugeot continued to try to develop this passion. At the 1889 Paris Universal Exposition, Peugeot proposed tricycles with instant vaporization engines, and his presence at that event was fundamental for the future of the House that still bears his name today. There Peugeot saw the Daimler Stahlradwagen, the car designed by Gottlieb Daimler and Wilhelm Maybach. At that moment, he decided that Peugeot would also produce cars. 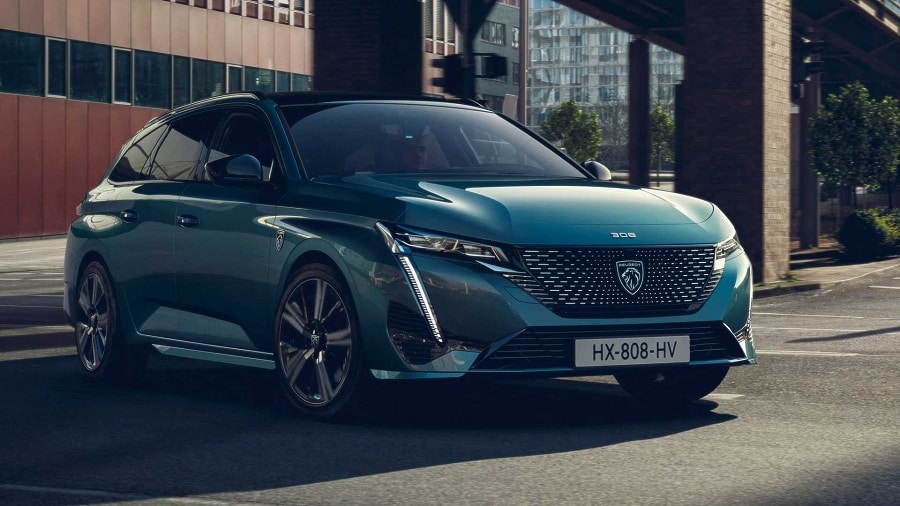 With barely concealed tolerance, the Peugeot brothers left Armand with resources to create the first cars with the Lion on the bodywork. The engines were produced by Daimler, while the production was accompanied by that of bicycles and Peugeot sewing machines. Société Anonyme des Automobiles Peugeot was born only in 1897, starting the story of the oldest of the French car manufacturers. Over 120 years later, the auto division took over the reins of the Peugeot empire, and continues to produce cars with great success today after joining the Stellantis Group.

Saab, fighters and planes before (and after) the car

Let’s move from pepper mills to decidedly more exciting products, reviewing the story of one of the most loved and regretted car manufacturers of recent years: Saab. To understand what Saab was about before cars, just analyze the name. Saab in fact stands for Svenska Aeroplan AB, or Swedish Airplanes Joint Stock Company. 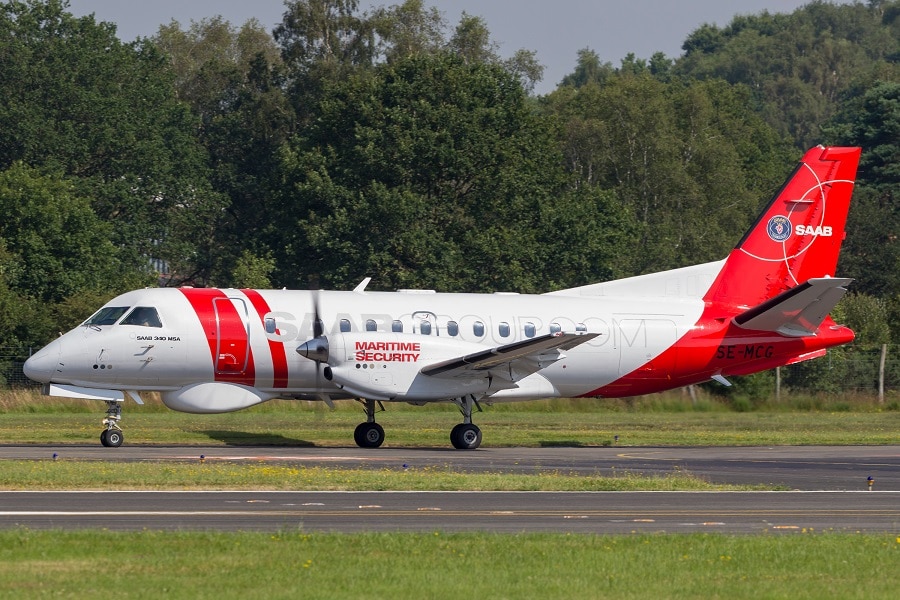 The Swedish House was born in Trollhattan, in Sweden, in 1937, and immediately devoted himself to production aeronautics. Among civilian aircraft, including the Saab 340, a 36-seat turboprop still used for short and medium trips, e military fighters used by several Air Forces in addition to the Swedish one, Saab has always kept aerospace as its main activity. In the 1940s, however, in Trollhattan they decided to differentiate their activities. Thus was born the automotive division of Saab, which in 1949 launched its first car, the 92. Equipped with a two-stroke engine and very resistant steel, suitable for the very cold climates of Scandinavia, Saab soon became appreciated all over the world. 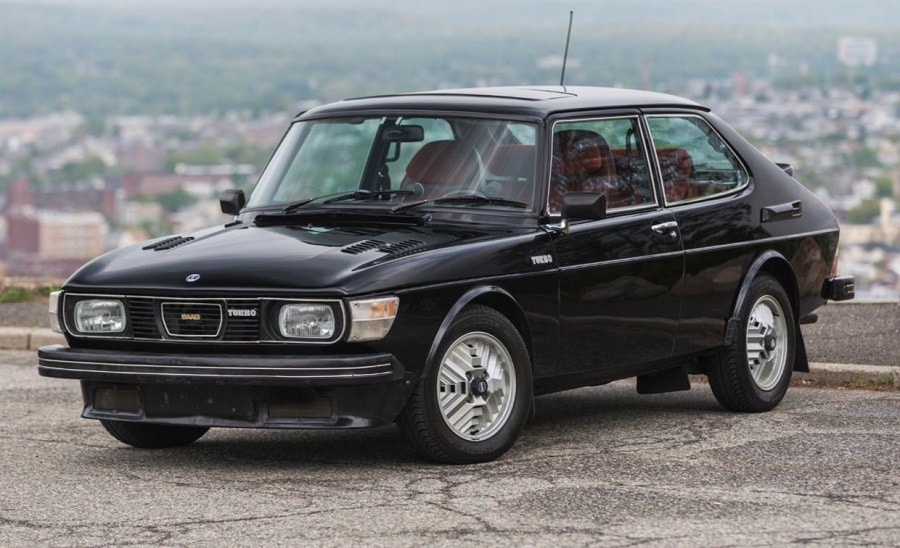 His cars were very distinctive, always original and different from the sensitive Volvos and classic European cars. With bold lines, personal interiors and innovative technical solutions, Saab carved out its space in the automotive world by leveraging eccentricity and uniqueness. Saab was also the first worldwide manufacturer to mass-produce a Turbo car, the 1976 99 Turbo. From that sporty compact, Saab rhymed with Turbo, and with a very particular approach. Proud of its aeronautical origins, the shapes and ergonomics of the interiors recalled the cockpit of a fighter. The function was also very particular Night Panel, which, as in the fighters, turned off all superfluous controls, leaving only the speedometer on. 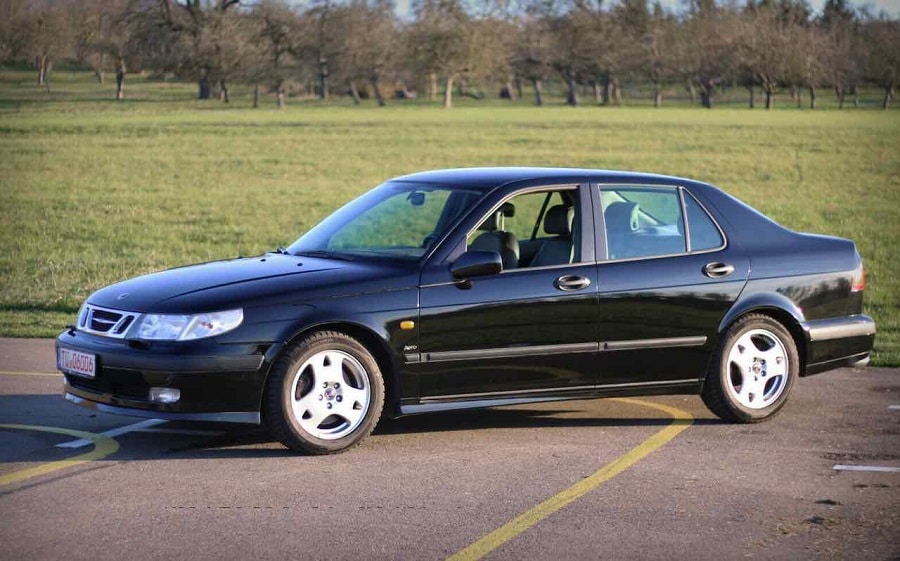 But making particular and eccentric cars costs a lot. For this, Saab AB was acquired in 1990 by an investment fund, Investor, which kept the aeronautics division but sold 51% of the shares of the auto division to General Motors, which was then acquired in full in 2000. From that moment, the inspiration of Saab clashed with the moderation required by GM, with very special cars derived from Opel products, such as the 900, 9-3 and 9-5. Despite the value of Saab cars, sales and above all revenues were lower and lower, bringing the Swedish house to the brink of bankruptcy, unfortunately arrived following the 2008 crisis.. The attempts to buy by Spyker and the Chinese NEVS, with the closure of the brand in 2016. However, the car manufacturer survived Saab Aerospace, which still continues to …