Triumph has revealed its new Tiger Sport 660 crossover which is immediately noticeable for its departure from the current Tiger design philosophy offering a sharp semi-hull and sporty looking that contains two LED headlights. The fuel tank has grown to 17 liters – from the Trident’s 14 liters – and the bike gets a new digital display with a small color TFT section. This model is designed for those looking for a motorcycle for daily commuting around the city, but who also want to take trips out of town, perhaps with a passenger on board, without having too many problems.

The side and tail angles are more familiar to the Trident, but the larger fairing gives the Tiger Sport 660 a stronger sense of “presence”. The 660cc three-cylinder engine is nearly identical to that of the Trident and produces the same 81PS and 64Nm of torque. Triumph claims it combines low torque with powerful mid-range and the highest horsepower in this class (again according to Triumph it claims the closest competitor is the Kawasaki Versys 650 and Yamaha Tracer 700).

The engine is also equipped with a slip / assist clutch and six-speed gearbox, while a quick up / down shift is available at an additional cost. A ride-by-wire throttle means Triumph has been able to design two driving modes (Rain and Road) for this model that control engine power and traction control (traction control can also be turned off independently if desired).

Triumph Tiger Sport 660, the bike that wants to be easy to ride

As for the other technical characteristics, the Tiger Sport 660 has automatic direction indicators, dual channel ABS. Triumph claims there are beyond 40 approved accessories, including specially designed panniers and a large top case.

The Tiger Sport 660 uses the steel main frame from the Trident, but the subframe is now different to accommodate the extra load this bike is designed to carry. The swingarm is also a bit longer and the wheelbase has increased by 11mm. Triumph says the seat has been redesigned for improved comfort and is 835mm off the ground. 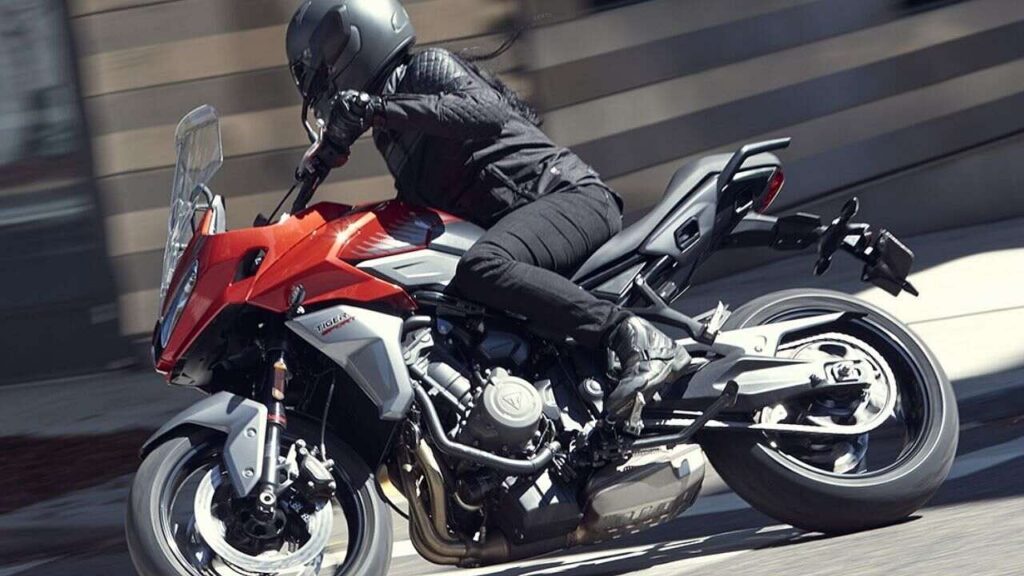 The Tiger Sport 660 gets 150mm of suspension travel at both ends, compared to 120mm and 133.5mm of front and rear travel provided in the Trident.

Suspension components are made from Showa, with a non-adjustable 41mm USD fork and a preload adjustable shock with remote adjuster. The rest of the chassis components, including 17-inch wheels, Nissin brakes and Michelin Road 5 tires, are the same as those for the Trident.

The new Triumph will be available from February 2022 to price of 8,995 euros (ex dealer) in the colors Lucerne Blue and Sapphire Black, Korosi Red and Graphite and a more minimalist option Graphite and Black.